Dirt has always been simple. The warm dirt under our knees and hands made up most of our childhood when at the end of every summer day you smelt like dirt, and all was right in the world. As grownups, not all is right in the world and not all is simple. Sometimes you need something to yank you out of the mundane and that “something” is what we set out to find with the Aprilia RX125 and SX125. 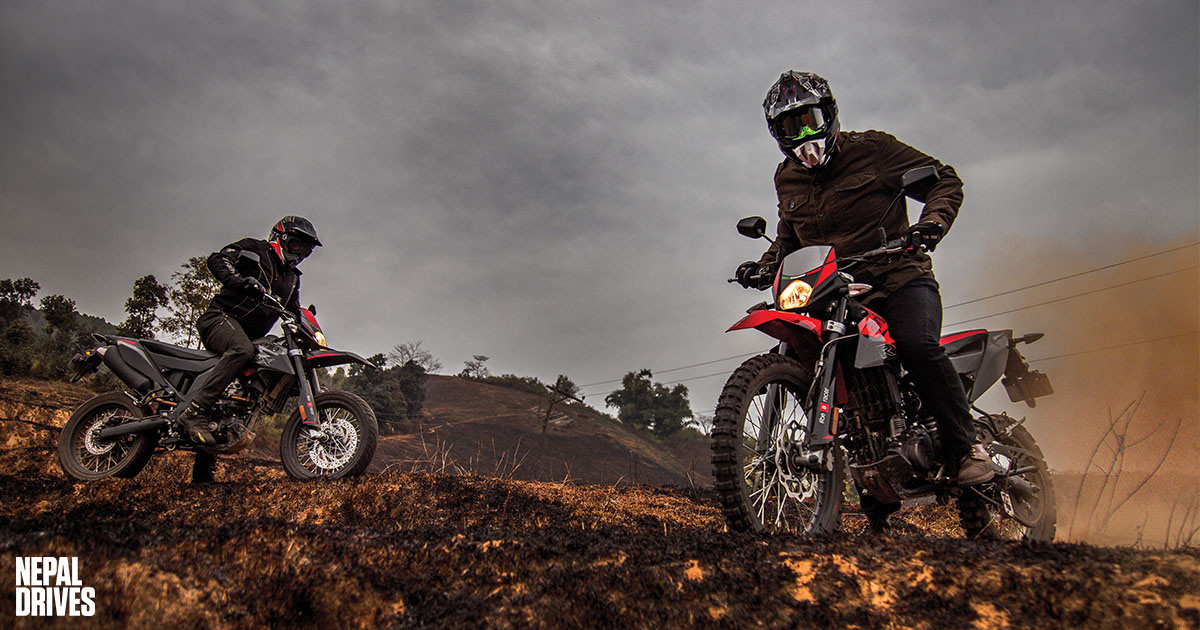 Now, with this machine, a concern that comes up for many is the displacement of the motorcycles; or lack thereof. At 125cc the Aprilia twins are the featherweights of the motorcycling scenario. Agreed. But, so were the Honda XL 125s when they came to Nepal. And if you’re telling us they weren’t one of the most exciting things to happen to Nepal’s motorcycling history, you’re probably not holding on to the right magazine.

With that said, we headed out in search of adventure! Or at least something that could take our minds off our dreary lives.

The SX125 and RX125, fairly obviously, share the same engine, steel frame, swingarm, fuelling system, Bosch ABS system, ergonomics, lights, seat, and styling. Where they do differ is on the wheel sizes and tyres

The SX has 17 inch spoked rims and CST road tires; the off-road RX has 21 inch front, an 18 inch rear, and CST knobbies, the larger sprocket size of the RX with 69 teeth compared to the 62 of the SX (to compensate for that change of wheel size), and in brake discs: the SX has a 300mm disc, the RX a 260mm wavy disc. 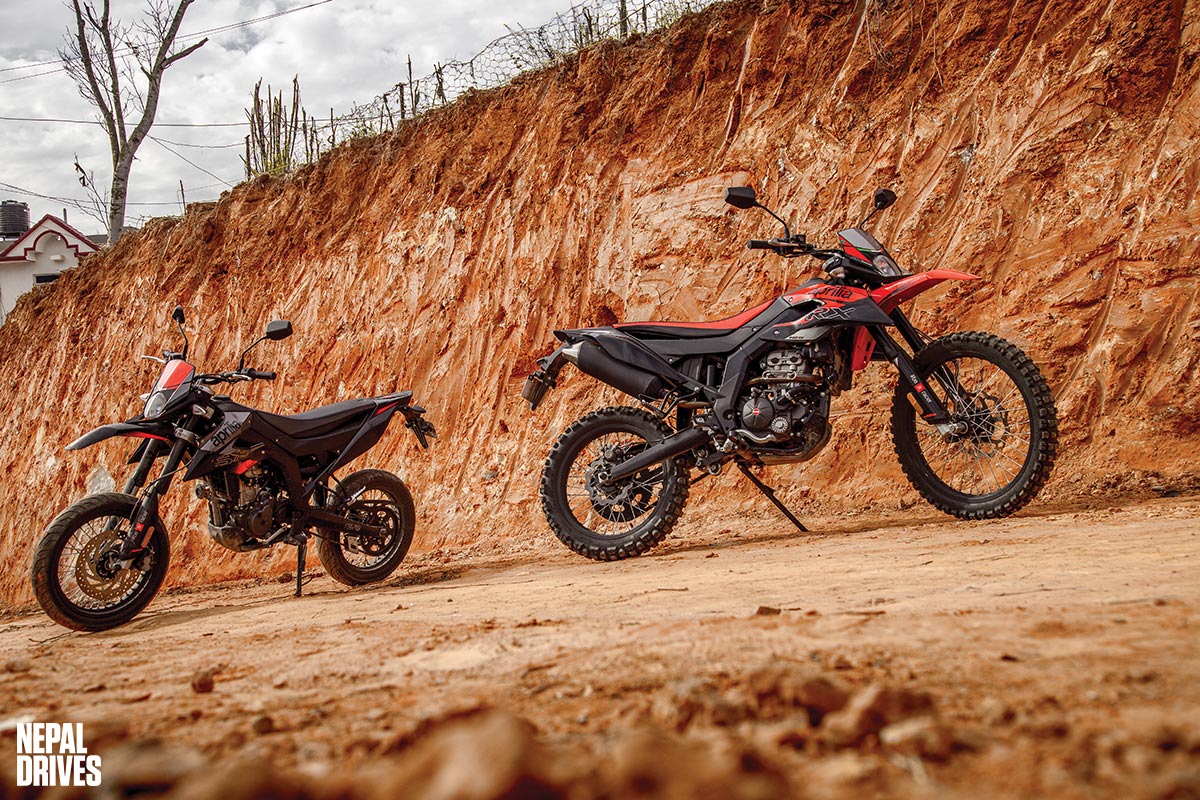 The SX125 and RX 125 is also equipped with Bosch ABS system with anti-rollover mode, pioneering the segment with this feature.

While the design cues on both the motorcycles are aggressive, the RX edges out the SX in terms of styling. It has a taller seating position and the aforementioned knobby tires give it extra oomph. Let’s not take anything away from the SX125, the supermoto styling definitely has its own appeal.

Apart from perfecting the aesthetics, the twins are peppered with an arsenal of important tech features. First on the list is the LCD instrument panel; yes, on a 125cc entry segment motorcycle. It is a sophisticated, compact, and easy to read digital unit. It also gets a travel diary which lets you view top speed, battery voltage, and with two trip mileometer which indicates the distance traveled during riding sessions.

Powering the slim frames of the Aprilia twins are single cylinder 125 cc engines. It does not possess the ability to make an impression off a standstill; however, where you’re really going to get the most out the engine is when you open the taps and let the throttle rip. To ensure the vibrations don’t ruin the experience the balance-shaft motor step into the equation.

The twins perform best when the engine is working overtime. All of the 15BHP comes into full force at 10,700rpm and that is where you’ll find both the RX125 and SX125 come to life.

Of course, there is no tachometer to distract you with the numbers so you simply push the engine to the point where you think it can’t take anymore, then you push it some more. Having said that, the twins each have its own particular domain it revels in. 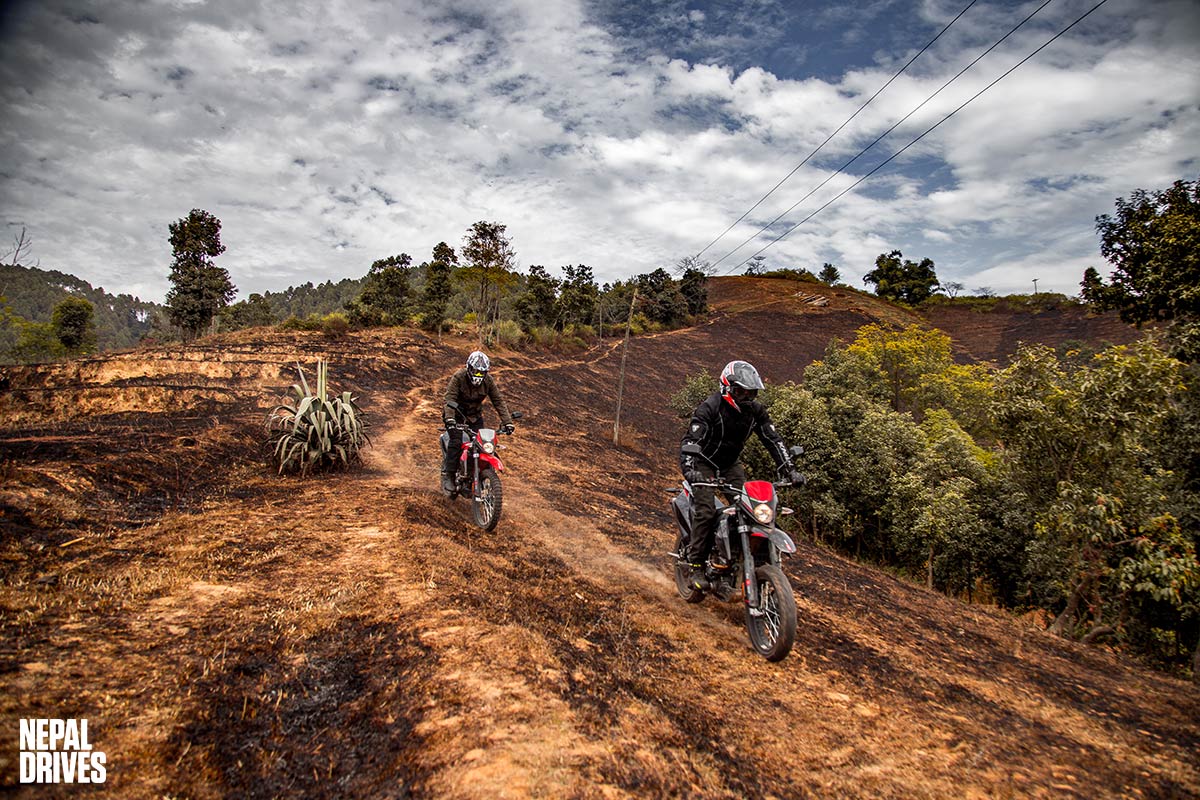 The SX is slim, agile and loves annihilating the tarmac. It can slalom through traffic like a skier maneuvering through a downhill course and it has no problem sticking to the corners when you lead it to the twisties. While the slightly soft suspension might not be ideal for lightweight riders, the hefty riders from Nepal Drives had little to complain about the system. On the downside, a little more oomph lower in the rev ranges would have been extremely welcome to propel said hefty riders faster. 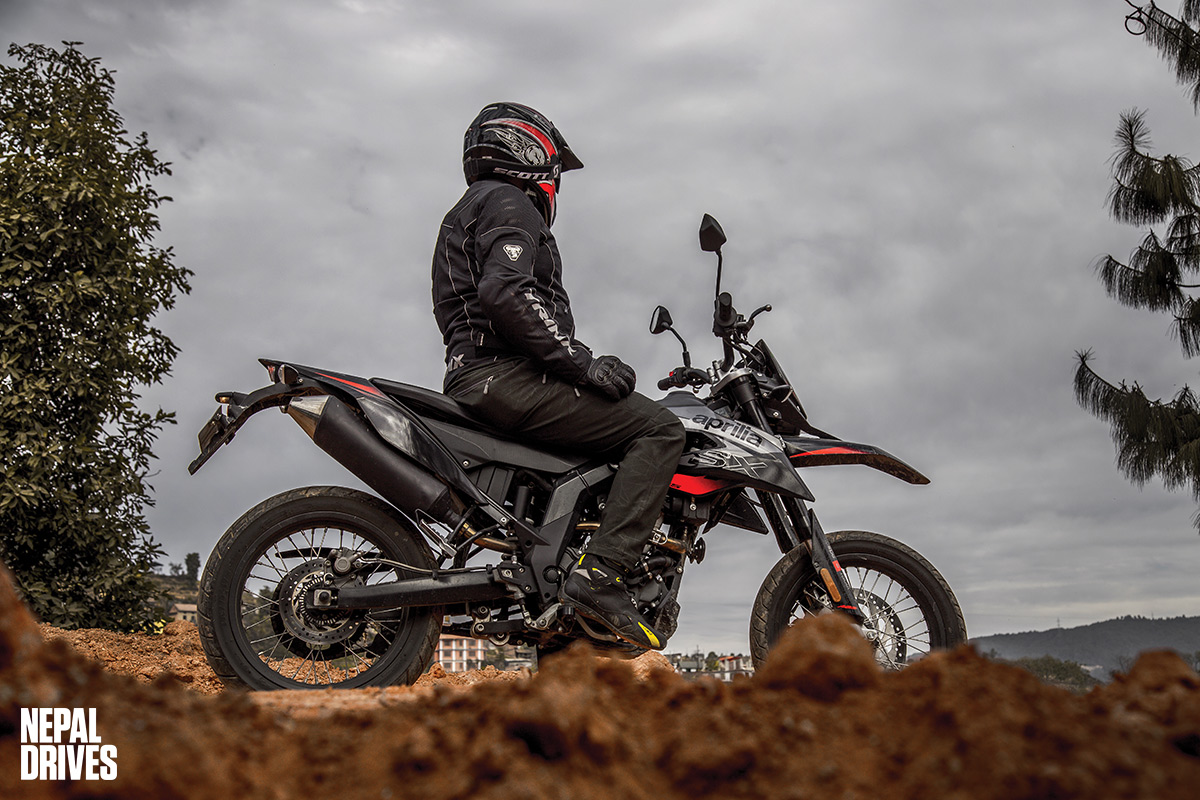 For the small displacement segment, the engine performance was astounding. It might not bolt off the line like a stabbed rat, but once you reach higher revs you forget that it is a puny little 125. The throttle response is crisp, you can dip into corners and scurry out of them with vigor, and thanks to the tremendous brakes fitted on to these Aprilias you can brake really late into the next corner. 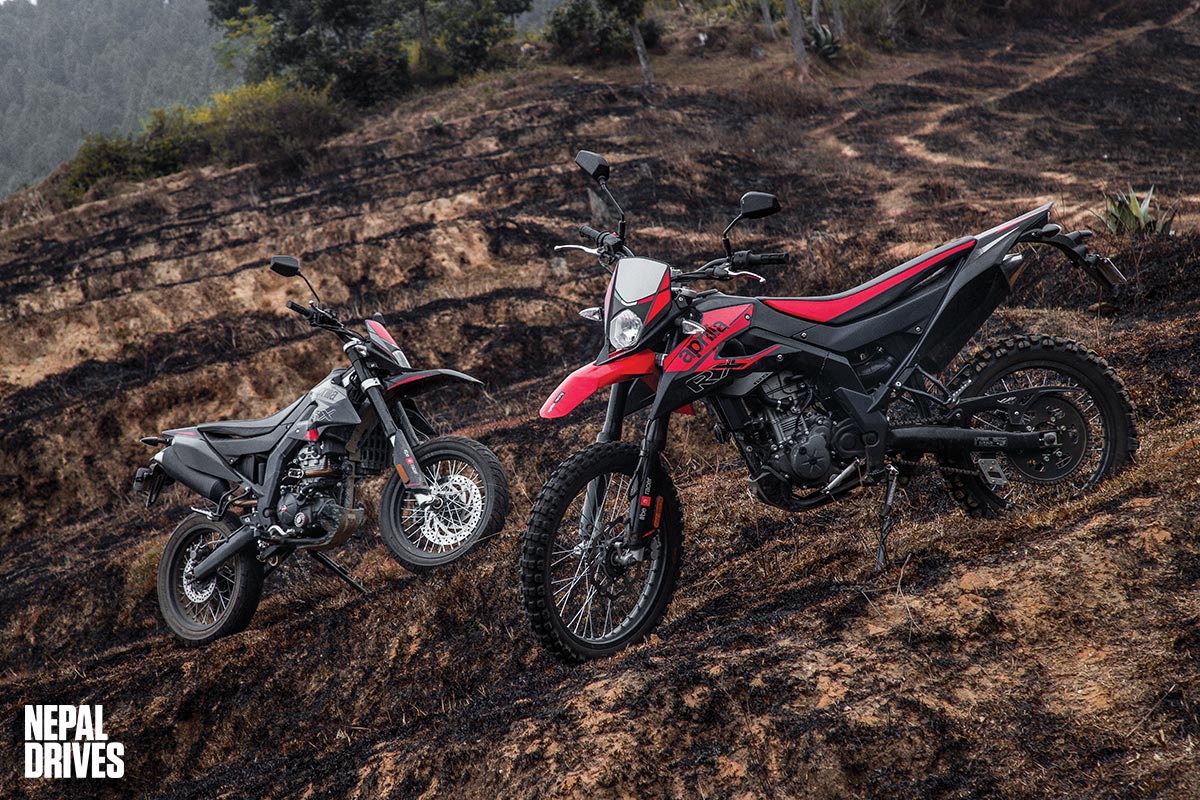 As you might have already guessed, the RX is more at home when the asphalt ends. Truth be told, the RX does feel slightly unsteady on the tarmac, which could be attributed to the hard off road CST tires. But, when it is in its element, the RX 125 really steps things up. The knobby tires aren’t afraid to sling a little dirt, and it provides a decent grip on any beaten path you direct it towards. Stand on the pegs, let the front tires dig in, and point and shoot. Because it is just a 125cc engine you will not be cutting any hill in half, but you have more than enough grunt to scamper across loose terrain. 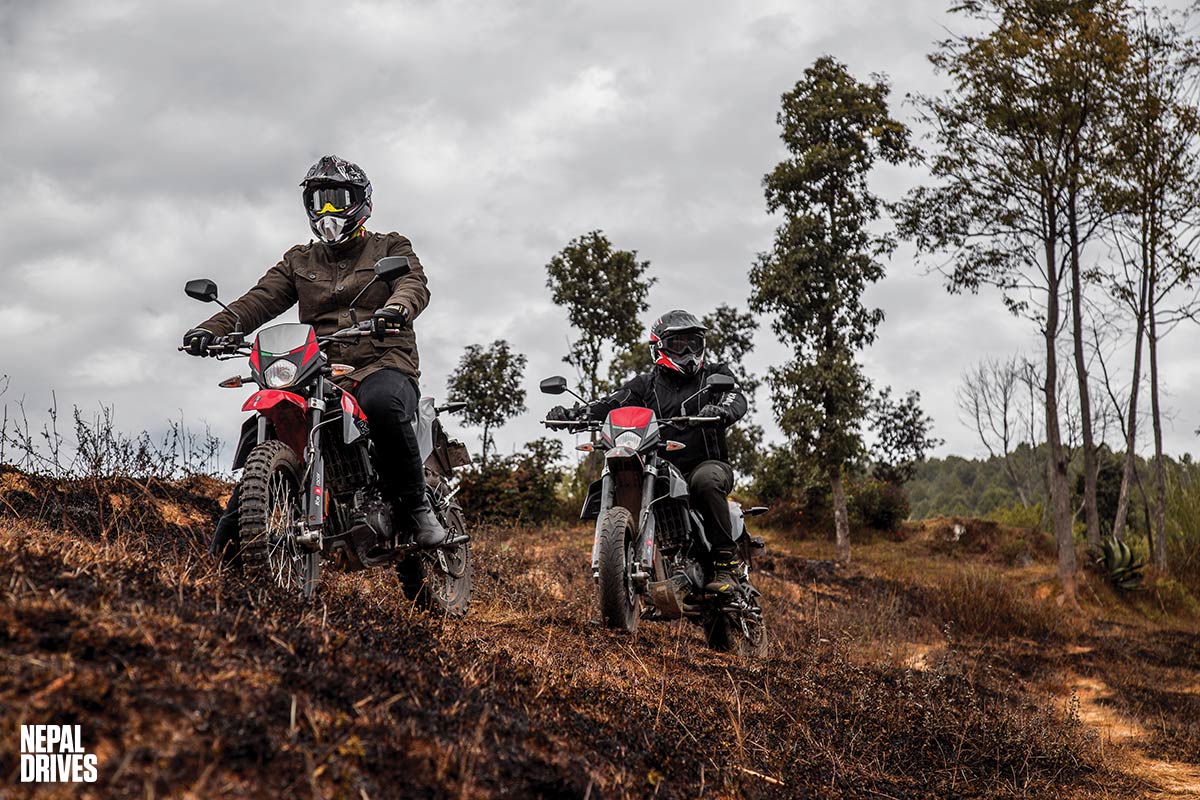 Once you start pushing the envelope and really make the most out of the 125cc engines you begin to understand the importance of the electronic assistance that steps in on these Aprilias; primarily the Bosch ABS and anti-rollover features. It allows you to make small mistakes and this, in turn, allows you to really wring out all of what the RX125 and SX125 have to offer without having to soil your pants at every turn.

First impressions of the Aprilia RX125 and SX125 were a mixed bag. They both look like performance oriented big bikes with a feature list that could put motorcycles from the quarter-liter segment to shame. However, cradled within the frame of the motorcycles were 125cc engines which usually find themselves in commuter motorcycles.

So, in essence, this seemed like the poster child for incongruity: equipment, electronics, and the looks of a machine built to perform with an engine displacement that would be more at home on the milkman’s motorcycle. Well, they had to their advantage the Aprilia badge. A company that has a successful history rooted in the supermoto and motocross segment, this duo certainly has the pedigree to astonish. And astonish it did. 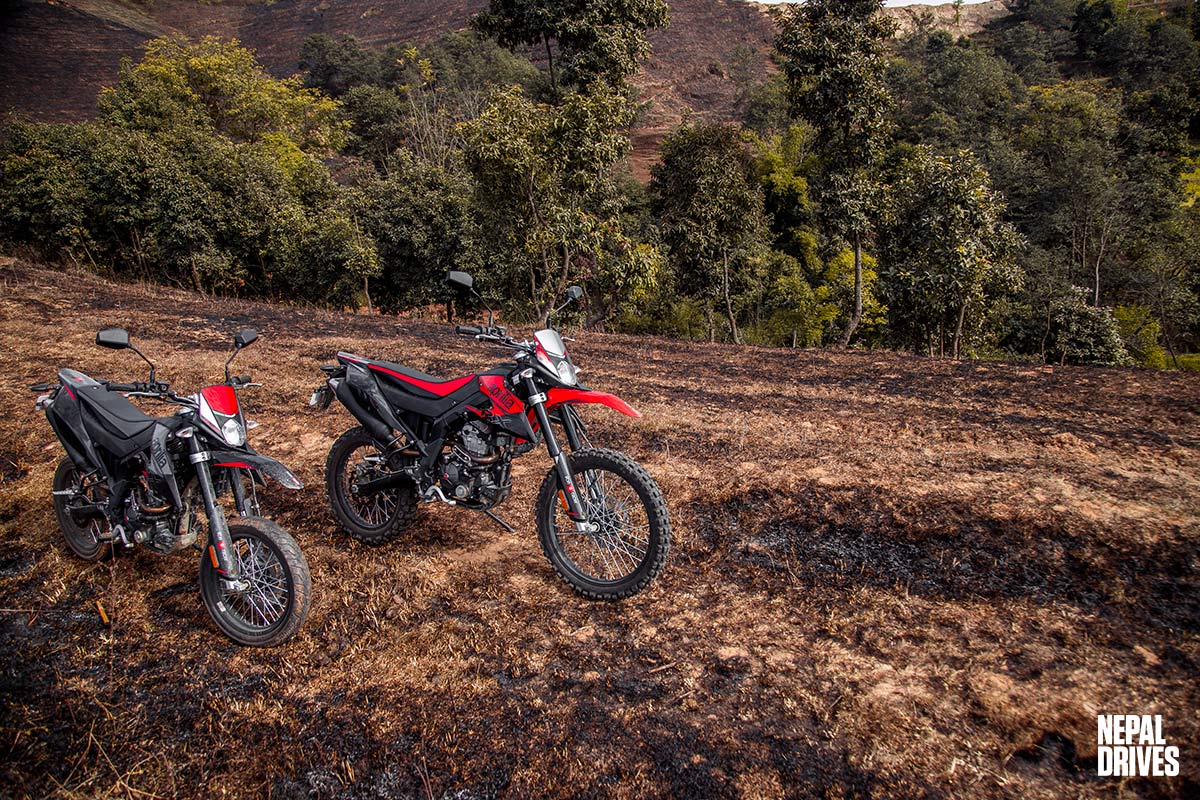 We’re not going to build castles in the air and tell you these motorcycles are going to knock your socks off. There are other motorcycles in the category that put out more power and hence could be a better candidate for outright fun. However, in the current 125-150cc segment, the Aprilia RX125 and SX125 are the undisputed champions.

Then you’re left with the question of the reasoning for the price tag. Yes, the electronics, equipment and aesthetics do play a role. But, the Aprilia twins have a greater calling. They are the ideal motorcycles that will help perfect a rider’s craft. It has the equipment and handling to help you learn the nitty-gritty of enduro and supermoto riding. If an inopportune moment should arise where a young rider makes a mistake, the electronic assistance steps in and works as a safety net. 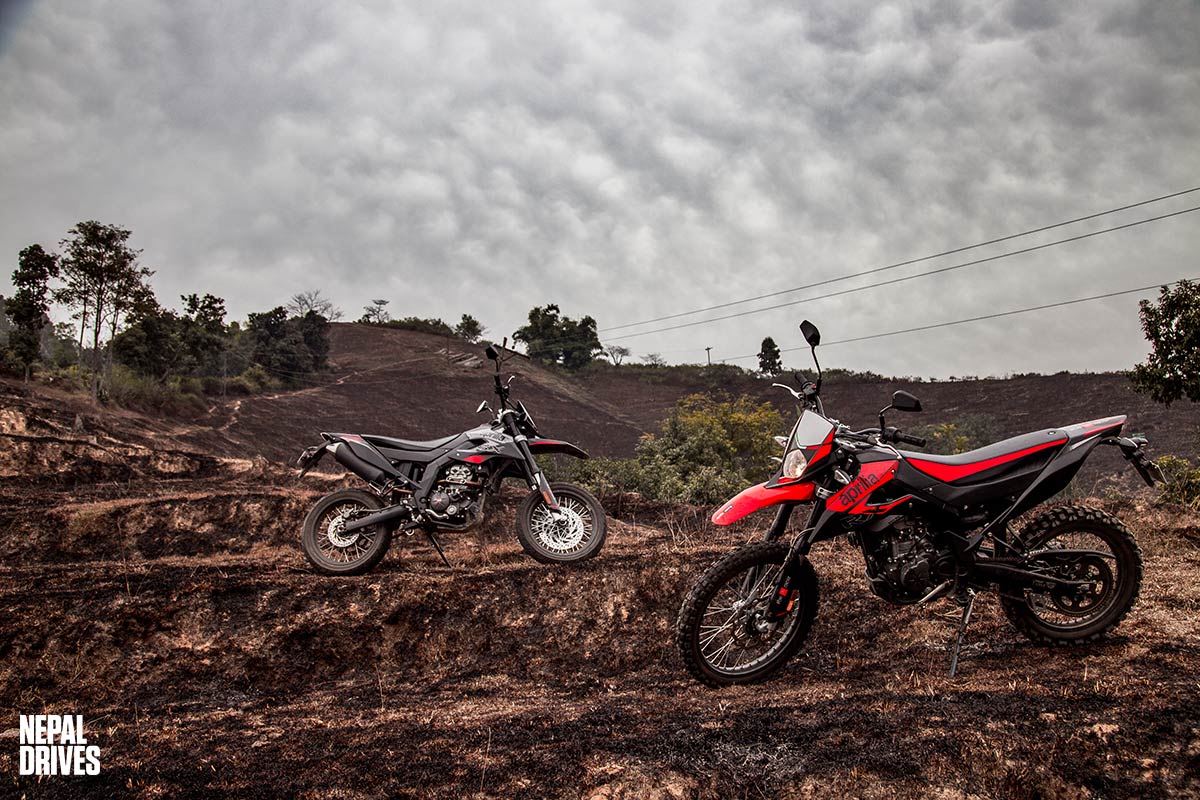 Hence, it seems only right to conclude that the Aprilia twins are for serious riders and perfectionists. Riders who want to explore, learn, and grow in the smaller segment so they can perform better and make the most use of their knowledge when they eventually upgrade. And for the ones who fancy a jaunt on the dirtier side, a skirmish with the demons of boredom, and some good old fun, these charming Italian steeds could be the weapon of choice. They managed to win us over on our little dirt slinging and tarmac twisting excursion, and they helped remind us that life is too short to always have clean fingernails.