Now, if you find the BAW name familiar it’s because it’s been around the Nepalese roads for some time now. The moniker can be seen badging a few public transport vehicles plowing the busy streets of Nepal. However, what we have here is on a very different side of the spectrum. We have with us the BAW Warrior, a promising off-roader that was jointly developed by Beijing Auto Works and Chrysler.

While BAW does contribute to the commercial market, they also produce special vehicles to meet the demands of military users of China. With an accumulated productive capacity of over 1 million vehicles and a sound contribution to the economic development and national defence, it becomes the fixed supplier of military purpose vehicles and the backbone company in the light off-road industry.

The BAW Warrior is the most widely used 4×4 vehicle in the Chinese army and the People’s Liberation Army. It is also used by some paramilitary and law enforcement units and also the UN. And it is now here to wreak havoc on the roads of Nepal.

The BAW Warrior plants itself on the Nepalese roads with indomitable authority. Just to give you a clearer perspective, the Warrior stands wider than the Hummer H3. It is a massive behemoth and if we were truthfully to ever use this term, it would be for this machine. Just from its sheer size, the BAW Warrior manages to turn heads, and it should since it is based on the stunning Cherokee. 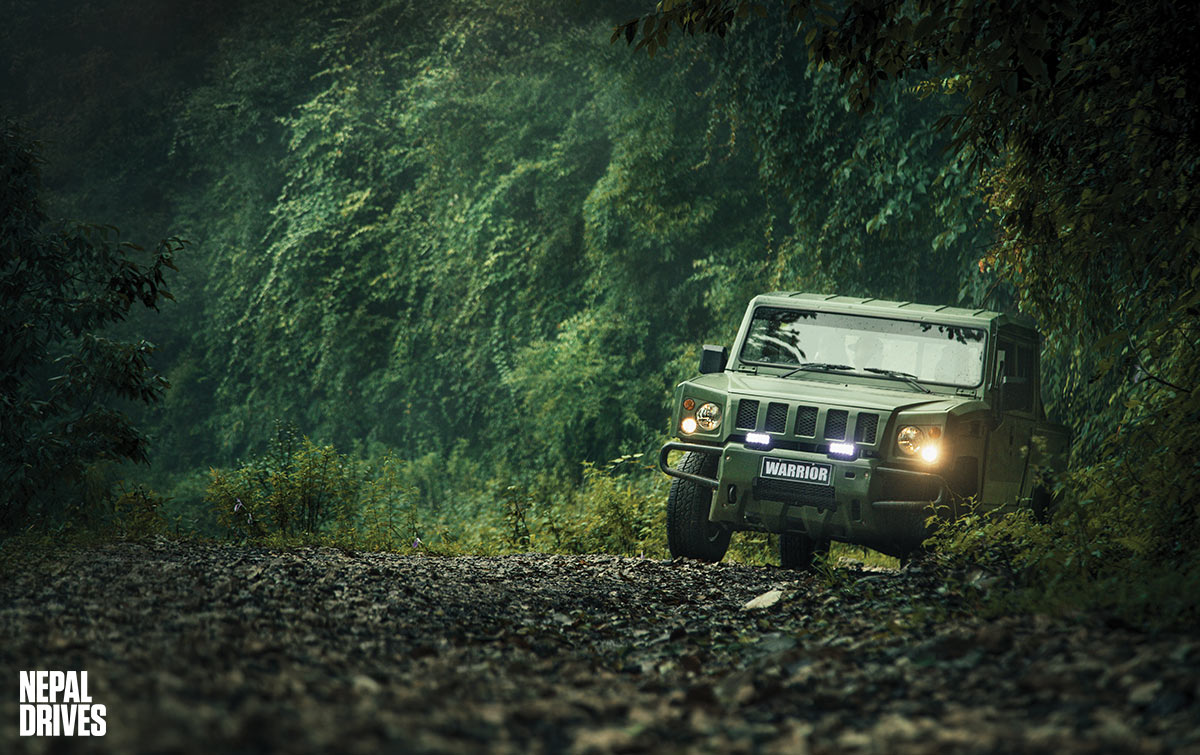 It is a masculine machine and you will not find a lot of frills; Its bare, raw, and ready for action. The mesh inserts are clearly visible through the 5 massive slots of the Jeep-esque grille. This is flanked by simple round headlights and side indicators on the flat front face. A massive bumper and side bull bars finish off the front. 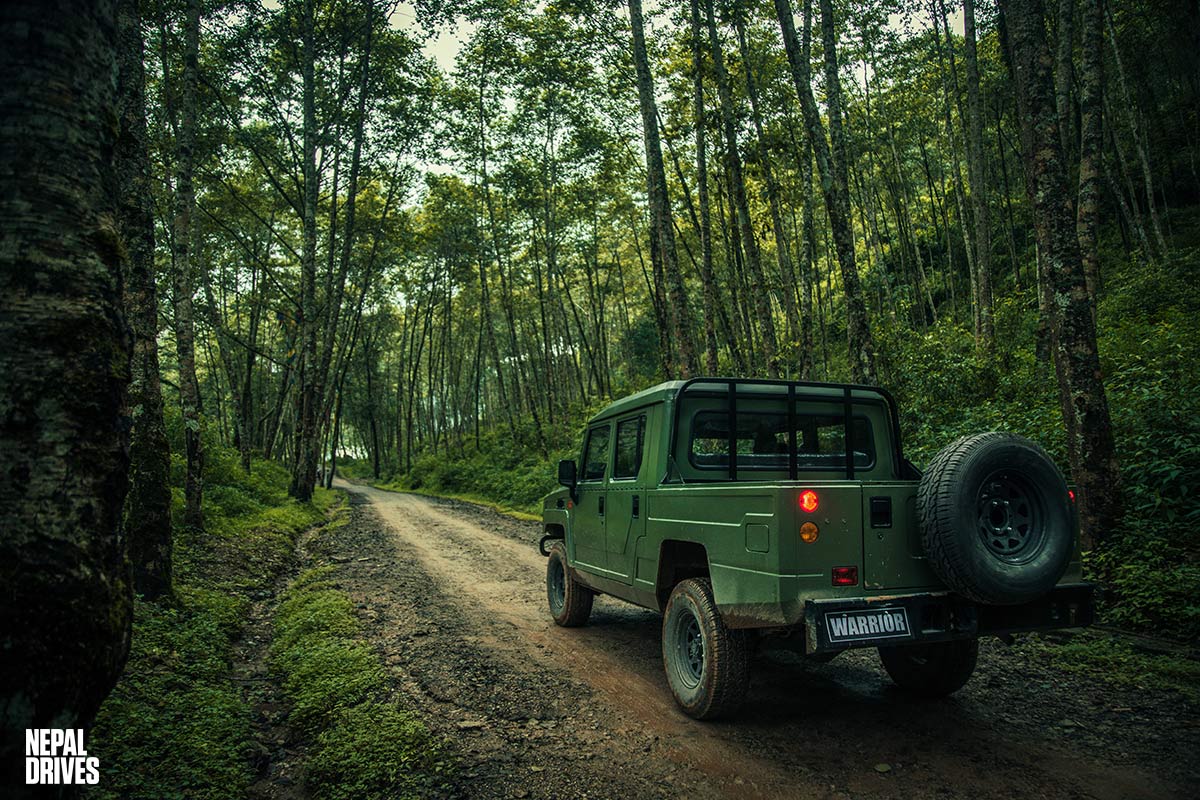 To be absolutely blunt, it is a boxy design and it is pretty evident. The windshield is rather vertical and the strong steel double cabin body has the same boxy design. This is carried on to the pickup bay which gets a spare wheel on the gate. 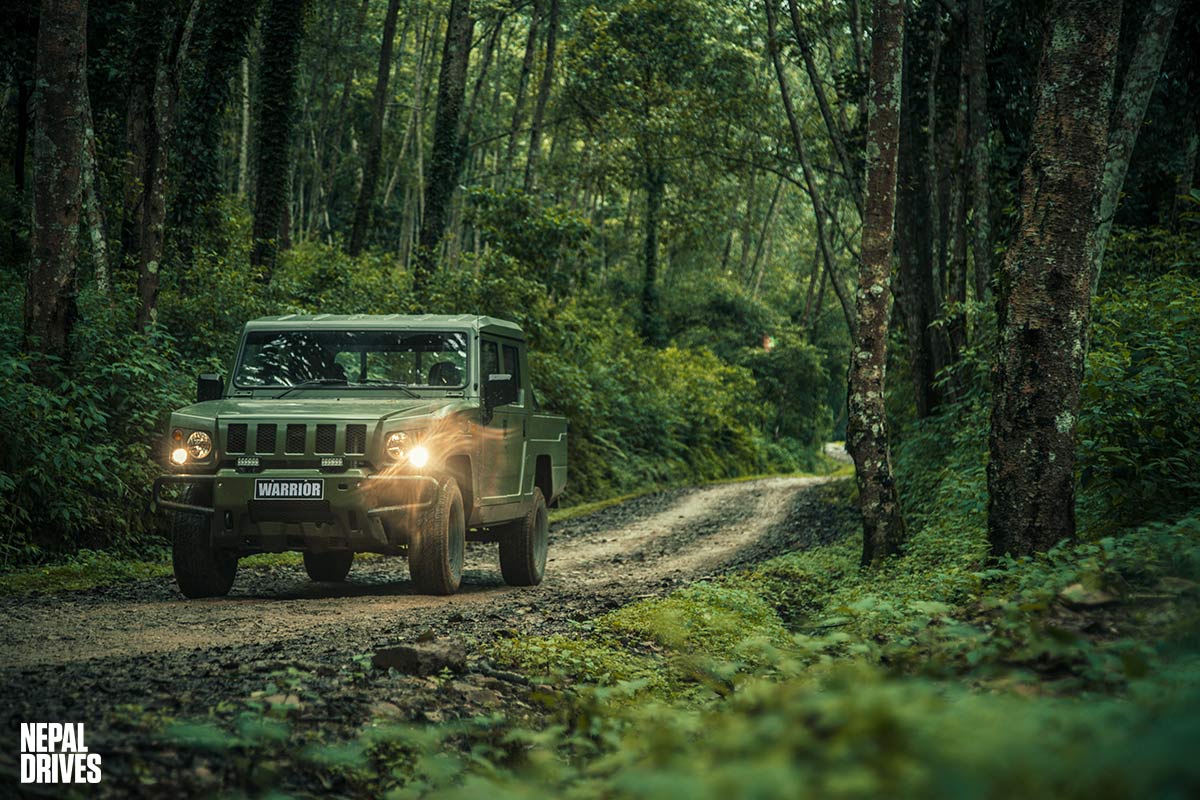 Much like the exterior, the interiors are simple. You wouldn’t look for luxury in a car that is meant for serious military business, would you? However, what it does exceed expectations in is the cabin space. There is acres of headroom and shoulder room for all occupants, 4 of whom you can comfortably accommodate in the rear seats.

You could even squeeze 5 people back there without too much trouble.The seats are comfortable and provide adequate support. Visibility for the driver is good, even the A-Pillars don’t cause too much of a distraction.

Inside the massive bonnet of the Warrior is a 2.7L diesel engine borrowed from Isuzu that works well to haul the massive machine around. It is a highly torque heavy mill which we loved. While the Warrior is better suited for off road driving, the way it performed on the tarmac put a smile on our faces. Shift up through the gears and you’ll notice that the engine delivers power to the rear wheels with much enthusiasm. 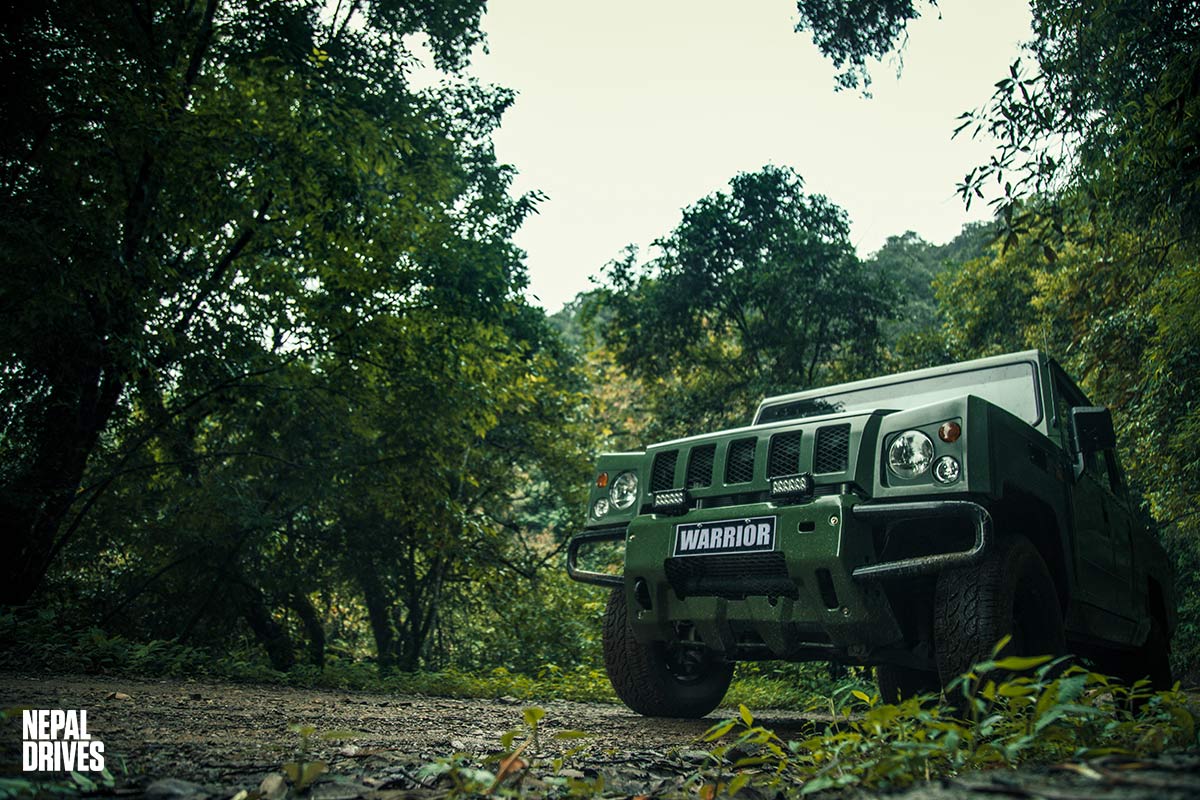 The gigantic frame takes up speed surprisingly fast and propels itself forward with commendable eagerness. Body rolls on such a massive machine is inevitable but you quickly learn to live with it. Similarly, without a payload on the rear bead, things do get kind of bouncy but nothing to totally put you off. 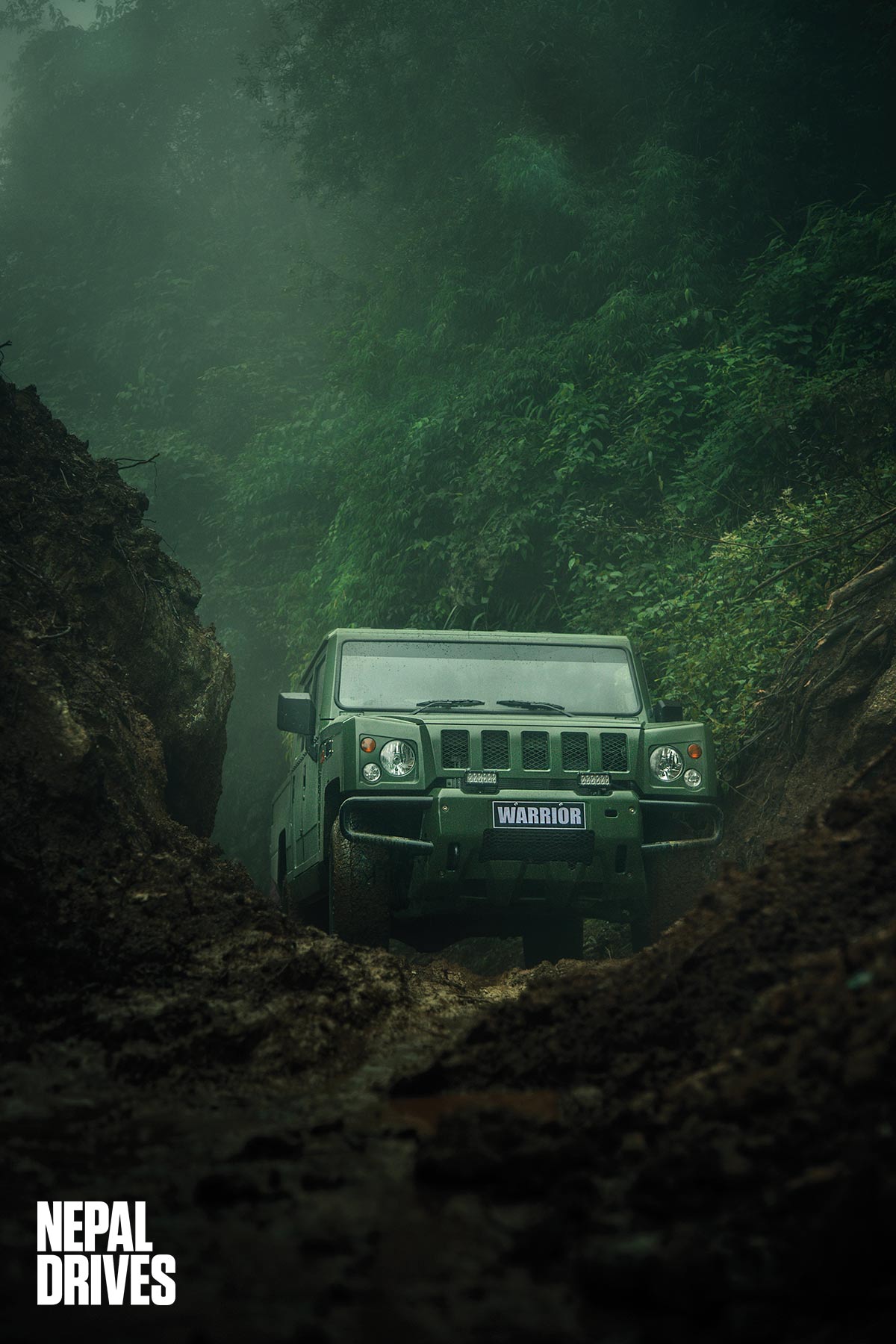 Let’s be honest here. You’re not going to drive a machine like the BAW Warrior to go grocery shopping around the city (the massive space in the rear-bed would help but finding a parking space would be torture). So we did what any sane person behind the wheels of a 2.7 liter, 4WD, military grade off roader would do; we took it off-roading. 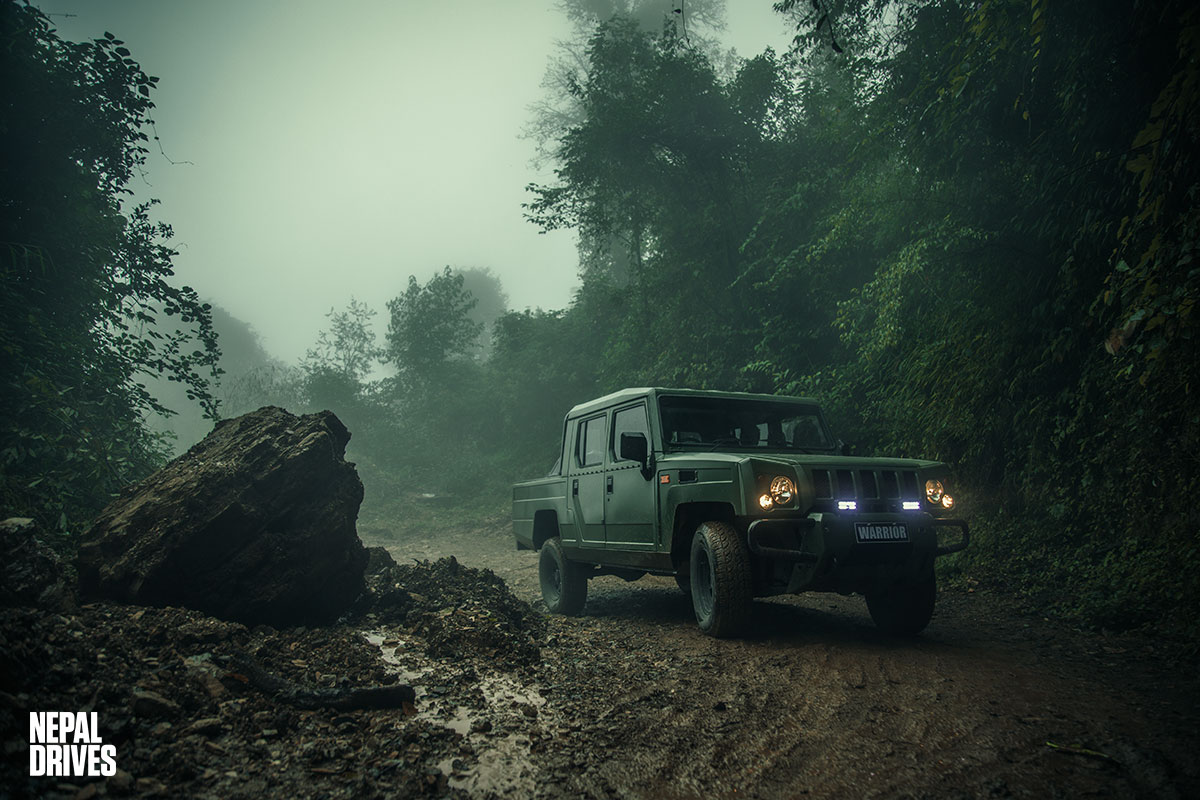 And this was where the Warrior truly shined. It suddenly came to life, as if happy that it was finally off the smooth tarmac. All that torque finally started to come to use as it chewed up and spat out anything in front of it. The massive ground clearance definitely came in handy too. 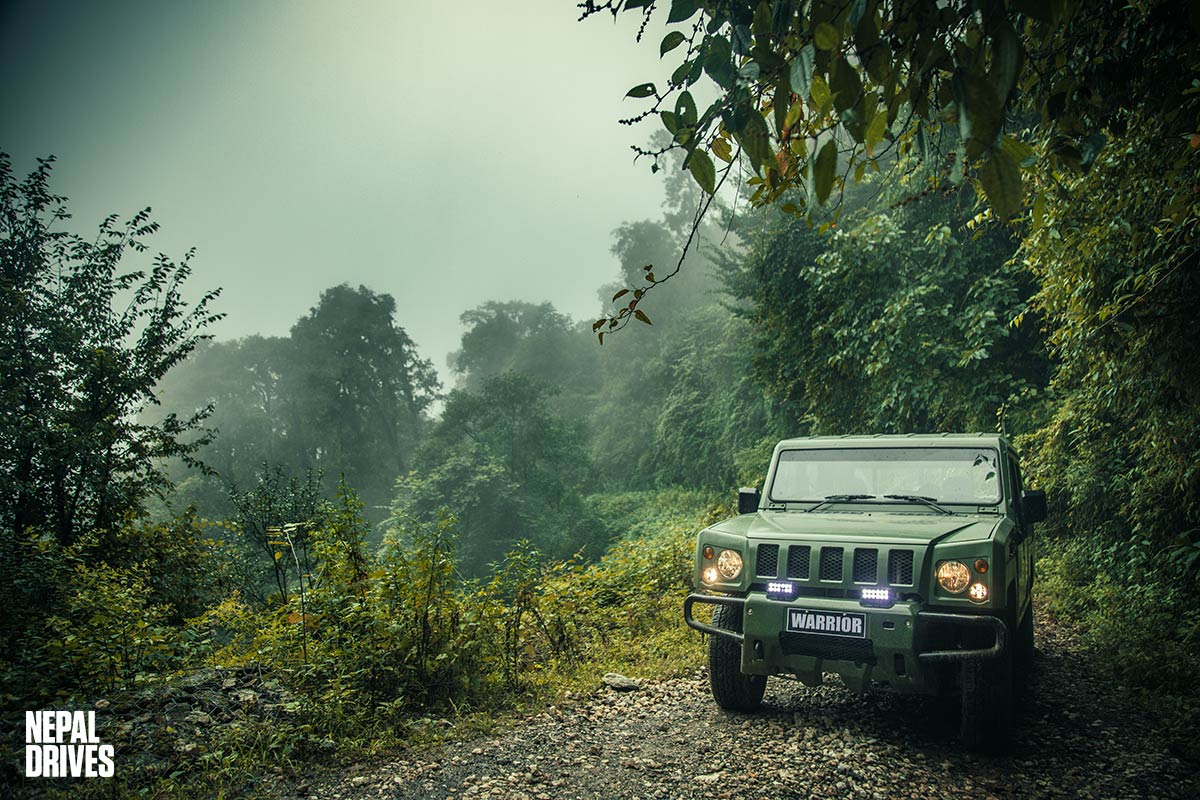 Feedback from the steering wheel was very good and you got a good sense of where you’re planting the wheels, which is great because you will be looking to tackle plenty of gnarly offroad terrains on this beast. We would have loved some knobbier rubber on this machine though, it felt like it was just making do with the stock tyres.

The BAW Warrior is a formidable machine in the Nepalese market. For its sheer size alone, it gets a lot of respect on the roads. However, if you’re looking for refined driving and luxurious interiors, its best you look somewhere else. The BAW Warrior is the most widely used 4×4 vehicle in the Chinese army and the People’s Liberation Army. 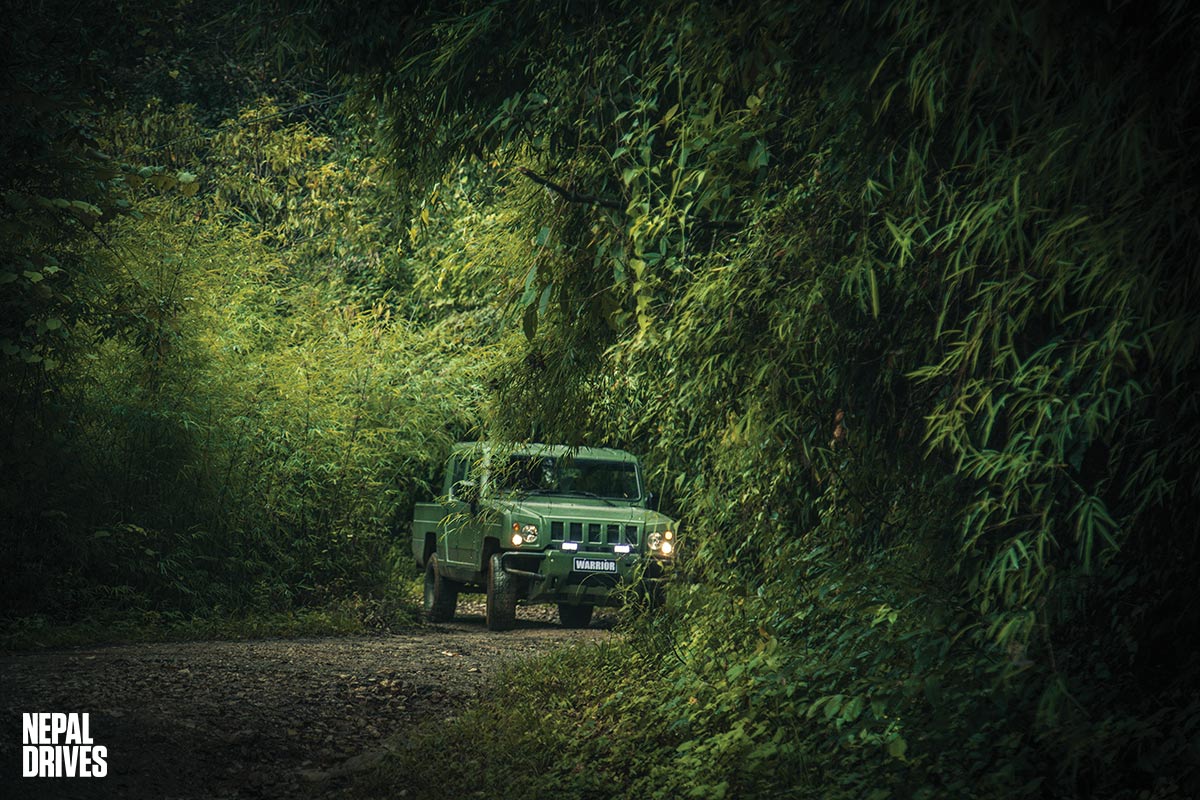 This is a raw animal, built to be a workhorse; it would not be happy restrained within the confines of the concrete jungle. If you’re looking for an off-road capable machine, and you’re not fussy about fancy frills this is a good option to look at. And, not to mention, it will outsize practically anything else in the segment that drives on the streets of Nepal. 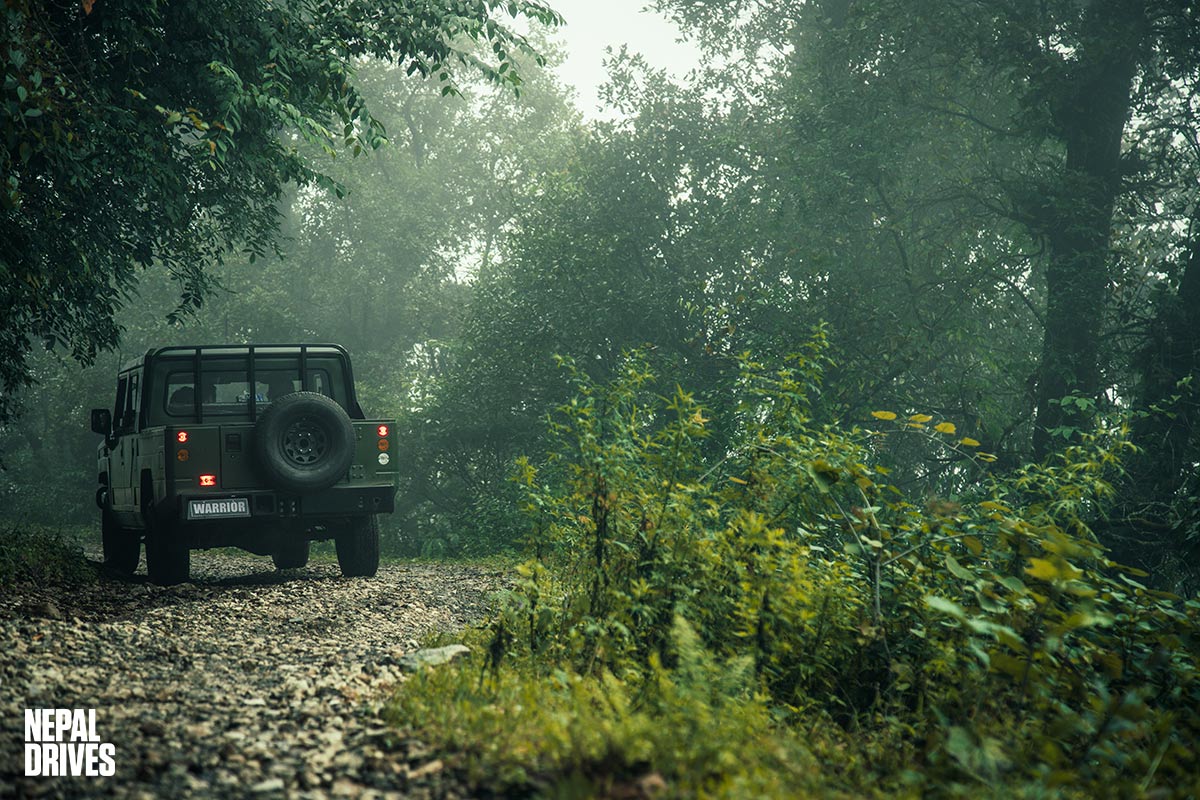 However, unless you’re planning to properly use the abilities of the Warrior as a private buyer, it will be a vehicle underused. We feel that the BAW Warrior would be better suited with a properly designated job. A job that requires traversing larger distances and beaten tracks. A job that utilizes the prowess that this machine has to offer. And priced at just Rs.46,00,000 it makes great monetary sense too.

NEXT 28 Oct 2018
The Fastest McLaren Ever: Speedtail