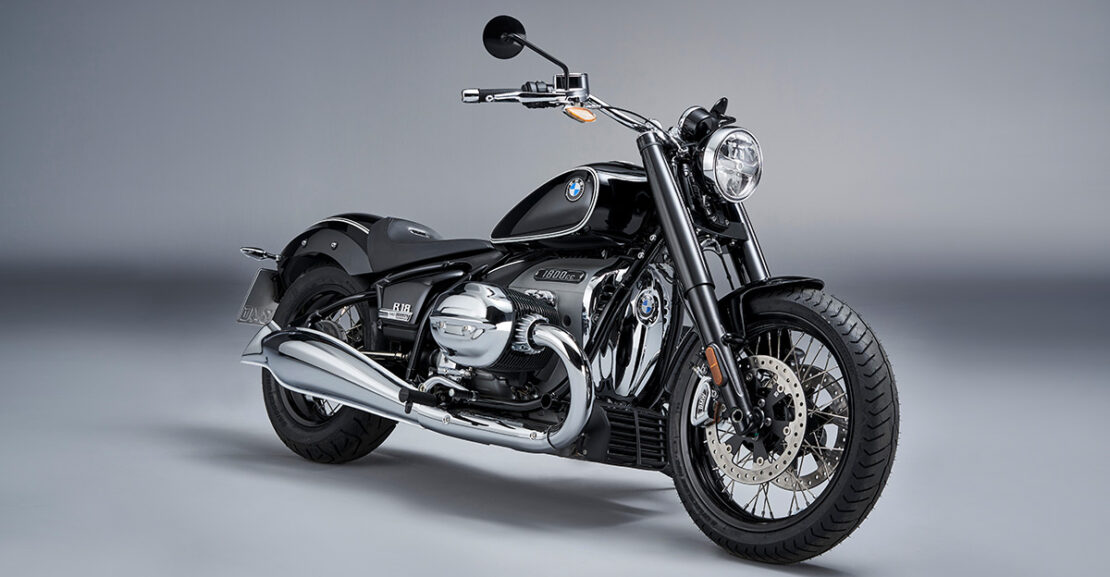 BMW Motorrad now enters the cruiser segment With the new R 18. Like no other BMW motorcycle before it, this model stands entirely in the tradition of historical BMW motorcycles – both technically and in terms of design style. 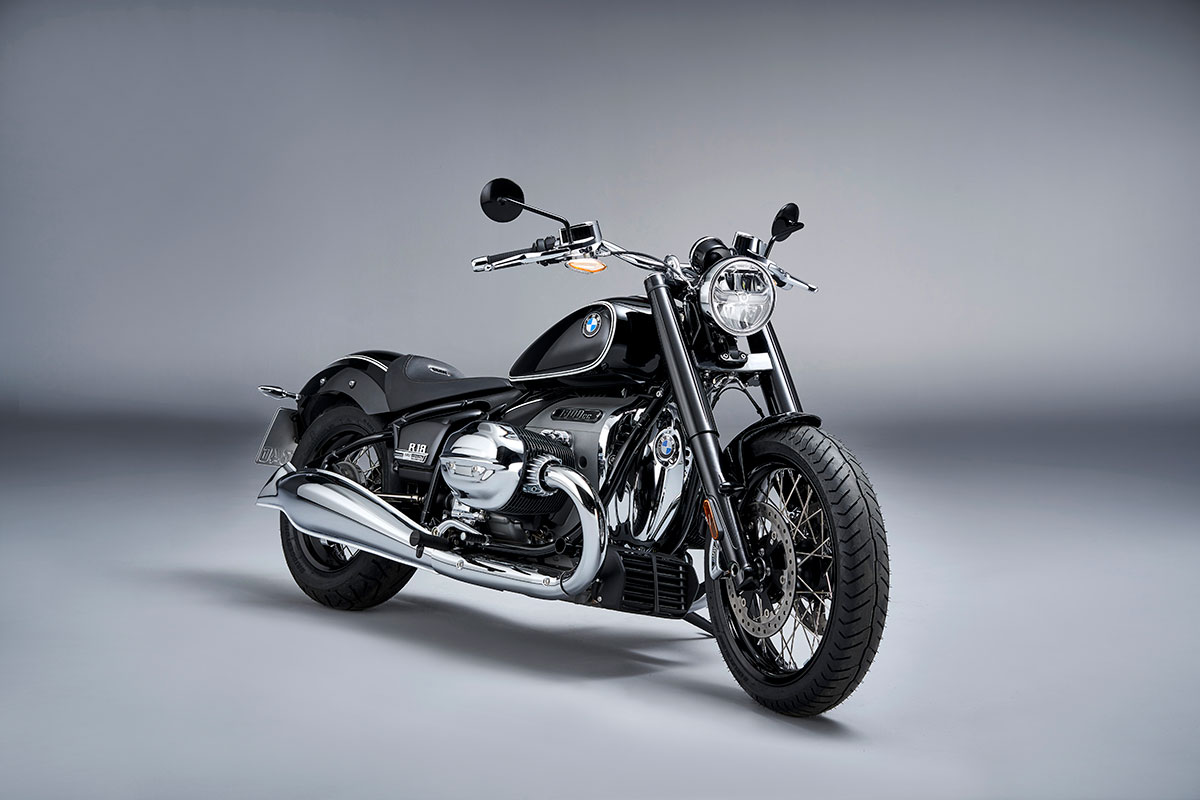 It borrows from famous models such as the BMW R 5 both technologically and visually, shifting the focus back onto the motorcycle essentials: purist, no-frills technology and the boxer engine. What is more, classic design is combined in the R 18 with clear-cut yet contemporary technology to create a fascinating riding experience. 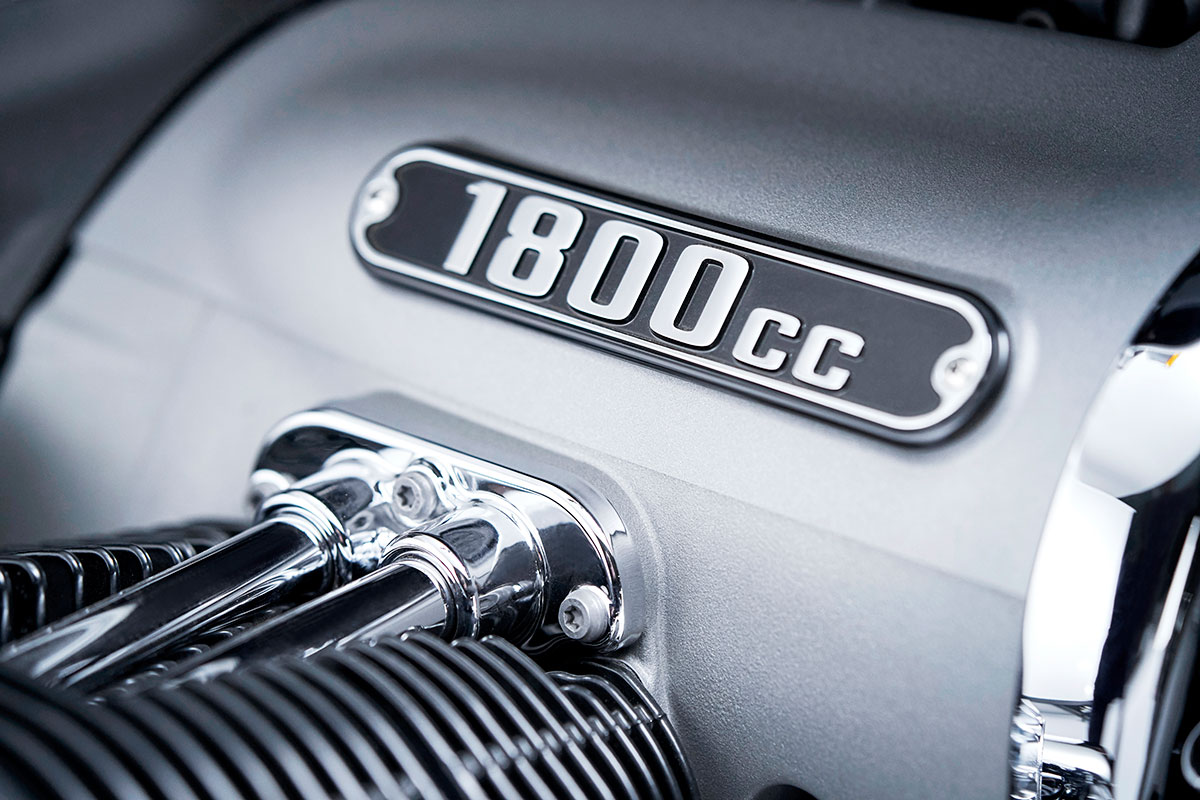 The centerpiece the new BMW R 18 is a newly developed 2-cylinder boxer engine – the “Big Boxer”. Both its impressive appearance and its technology reflect a continuation of the traditional air-cooled boxer engines that have offered an inspiring riding experience since BMW Motorrad began production in 1923. The most powerful 2-cylinder boxer engine ever used in motorcycle series production has a displacement of 1802 cc. The peak output is 91 hp at 4750 rpm. From 2,000 to 4,000 rpm, over 150 Nm of torque is available at all times, and this elemental pulling power is combined with a full, resonant sound. 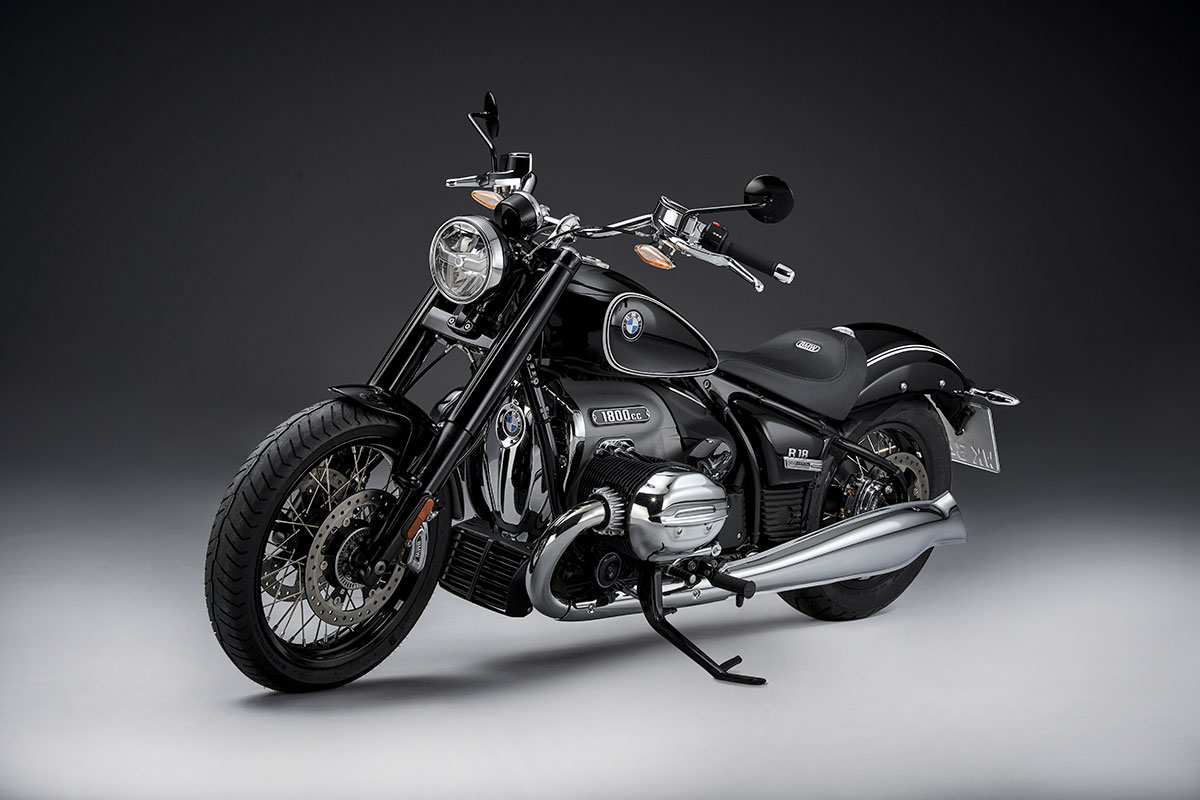 The centerpiece of the suspension in the new R 18 is a double-loop steel tube frame. Its design perpetuates the longstanding BMW Motorrad tradition of this frame type. Outstanding manufacturing quality and meticulous attention to detail are also evident in unapparent features such as the welded joints between the steel tubes and the cast or forged parts. Like the legendary BMW R 5, the rear swingarm – sporting a comparable design – surrounds the rear axle transmission is authentic style by means of bolted connections. 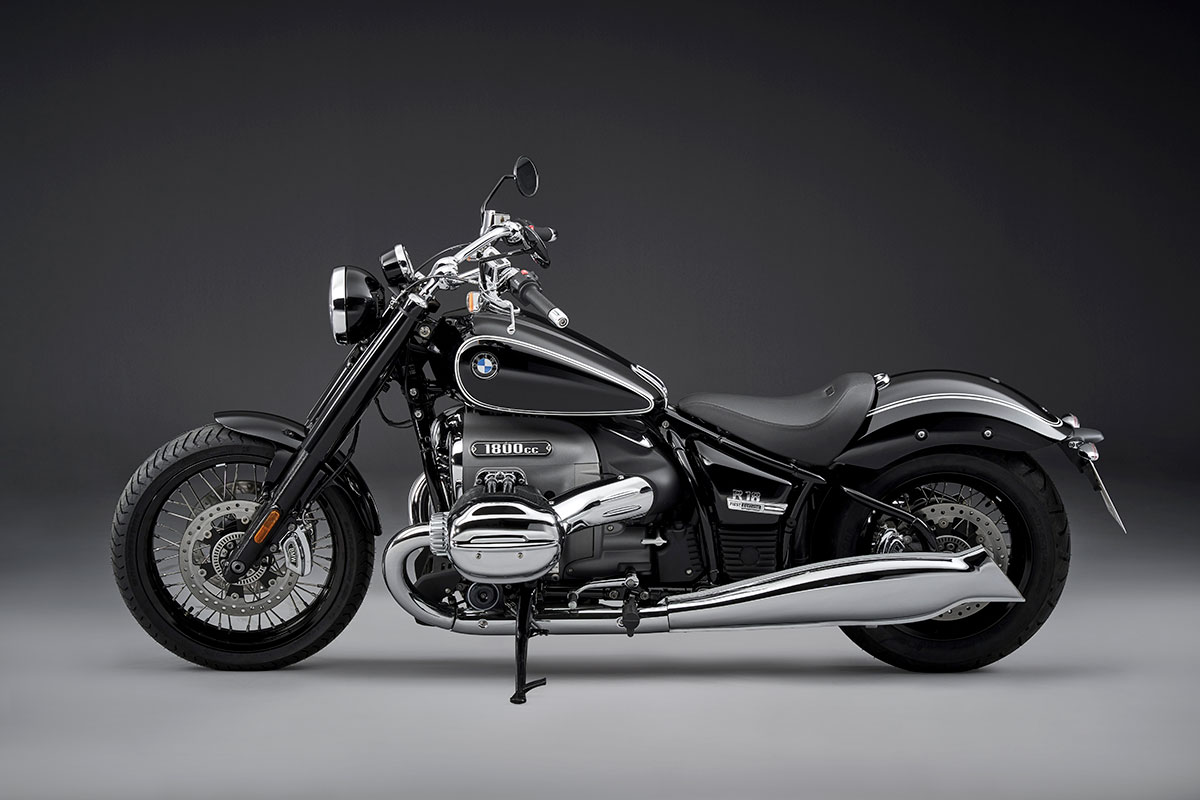 The suspension elements of the new BMW R 18 deliberately dispense with electronic adjustment options. Instead, a telescopic fork and a directly mounted central suspension strut with travel-dependent damping and adjustable spring preload ensure superior wheel control and attractive suspension comfort. As in the legendary BMW R 5, the tubes of the telescopic fork are encased in fork sleeves. The fork tube diameter is 49 mm, while the suspension travel is 120 mm at the front and 90 mm at the rear. The new BMW R 18 braking system consists of a twin-disc brake at the front and a single disc brake at the rear in conjunction with four-piston fixed calipers. Meanwhile, the wire-spoked wheels ensure a supremely stylish appearance. 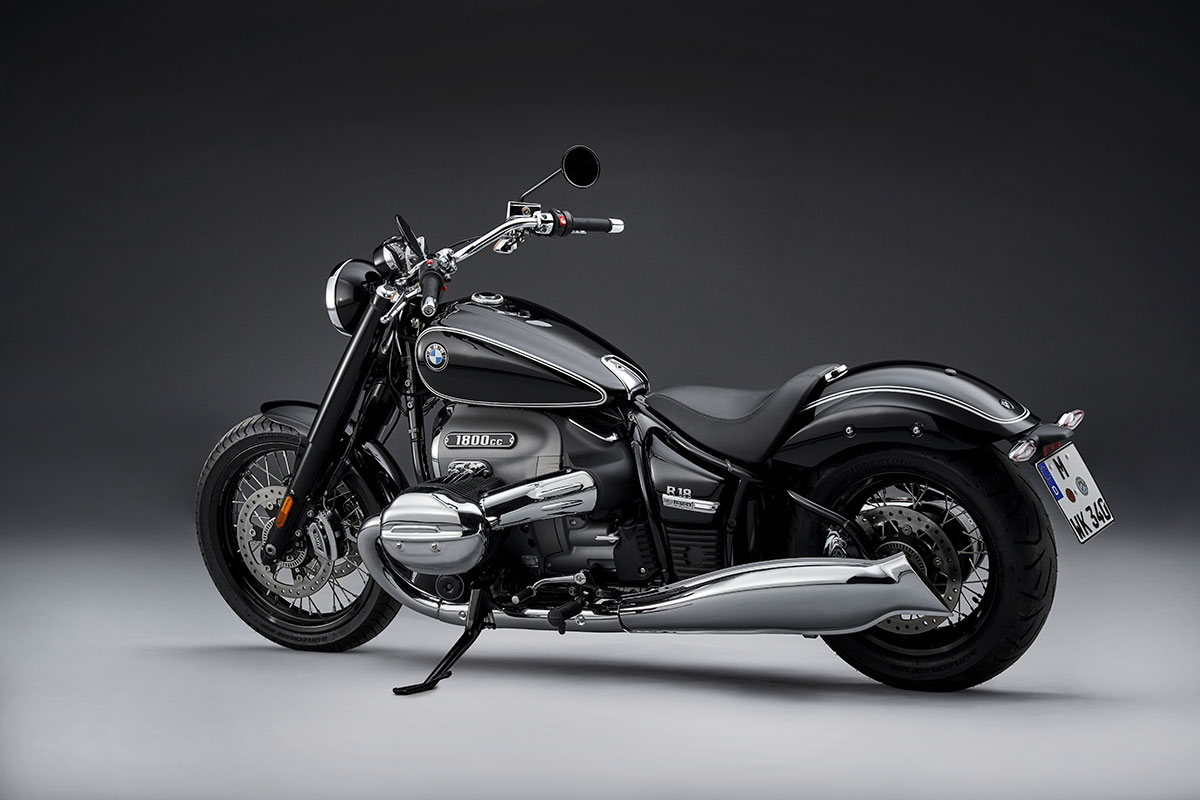 In keeping with the BMW Motorrad philosophy, the new BMW R 18 features a laid-back positioning of the footrests – so-called “mid-mounted footpegs”. This classic position behind the cylinders is not only typical of BMW, but it also enables a relaxed and active riding position for optimum vehicle control. The new R 18 also offers the three standard riding modes “Rain”, “Roll” and “Rock” – unusual in this segment – so as to be able to adapt to individual rider preferences. The standard trim also includes ASC (Automatic Stability Control, dis-engageable), which ensures a high level of riding safety. In addition, the new R 18 is equipped as standard with engine drag torque control (MSR). Among other options, a reverse assist makes maneuvering convenient, while the Hill Start Control function facilitates uphill starts. 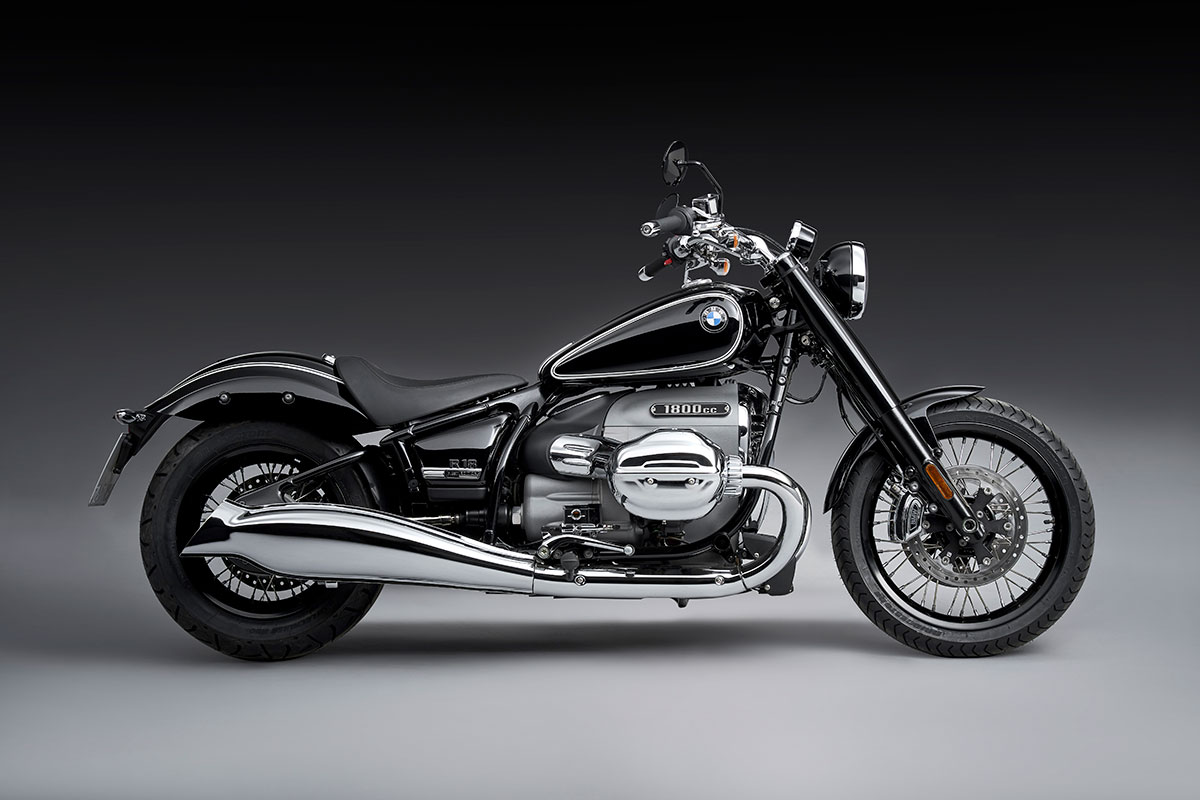 The R 18 masterfully transposes the iconic style of bygone times to the present day, retaining a purist design in numerous details that are mainly influenced by classics such as the BMW R 5. It is no coincidence that functional and stylistic elements such as the double-loop frame, the pear-drop tank, the open-running driveshaft and the pinstriped paintwork (ex-factory option) are reminiscent of the legendary boxer dating back to 1936. The classic bodywork features of the R 18 are also made of metal – as befits an authentic classic. The suspension is likewise aptly reminiscent of the legendary R 5. Together with the double-sided swingarm and a cantilever suspension strut, the rigid-frame concept of the R 5 is perfectly transported into the modern age in visual terms. 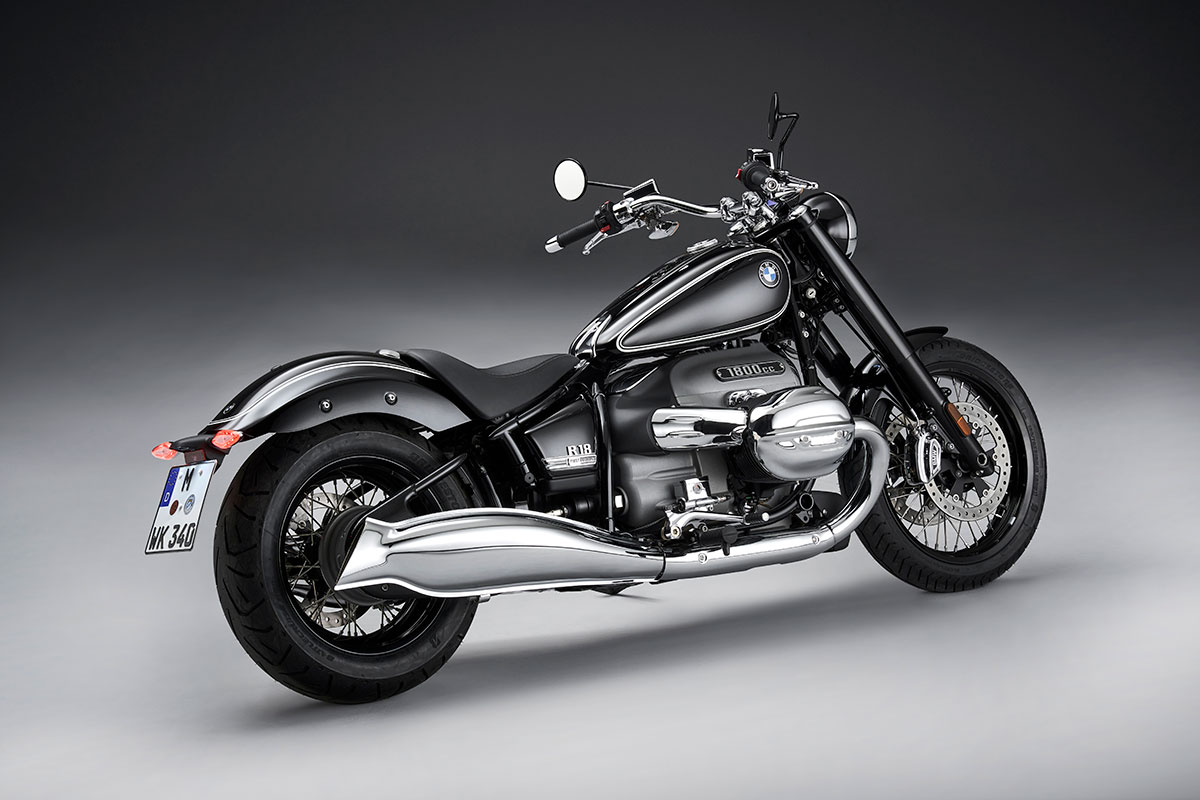 More so than virtually any other motorcycle, the new R 18 offers a highly conversion-friendly design – a focus even in the early design phases of the basic motorcycle layout. As a result, it is equipped with an easily removable rear frame and a simple-to-dismantle painted part set. Carefully conceived attachment points for the hydraulic lines of the brake, clutch and cable harness likewise allow easy installation of higher or lower handlebars in conjunction with matching hydraulic lines and cable harnesses. In addition, the visible valve covers (cylinder head covers) and the belt cover (engine housing cover) are designed in such a way that they are located outside the oil chamber, making them very easy to change. 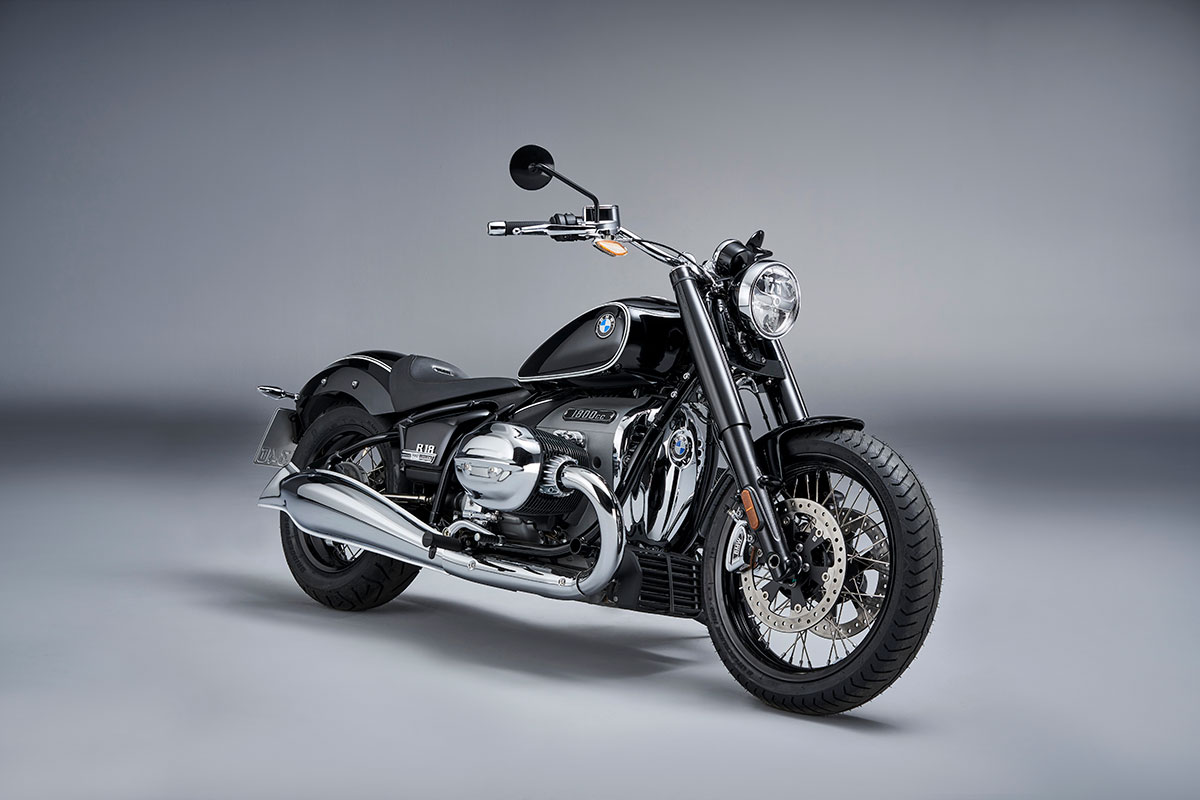 The new R 18 will be offered worldwide as an exclusive R 18 First Edition right from launch, with a standard model reserved additionally for certain markets. It combines the R 18 looks with exclusive equipment features in a classic black finish with white pinstriped paintwork. Other highlights include numerous chrome surfaces, a seat badge and a “First Edition” chrome clasp on the side covers. The standard R 18 will set you back a surprisingly reasonable $17,495, while the First Edition will go for $19,870. Bikes are currently slated to hit dealers later on in 2020, but given the dramatic effect that the coronavirus outbreak has had on the industry, that could be pushed back.

NEXT 05 Apr 2020
MotoGP, Petrucci: “This Season Will be a Surprise for Everybody”