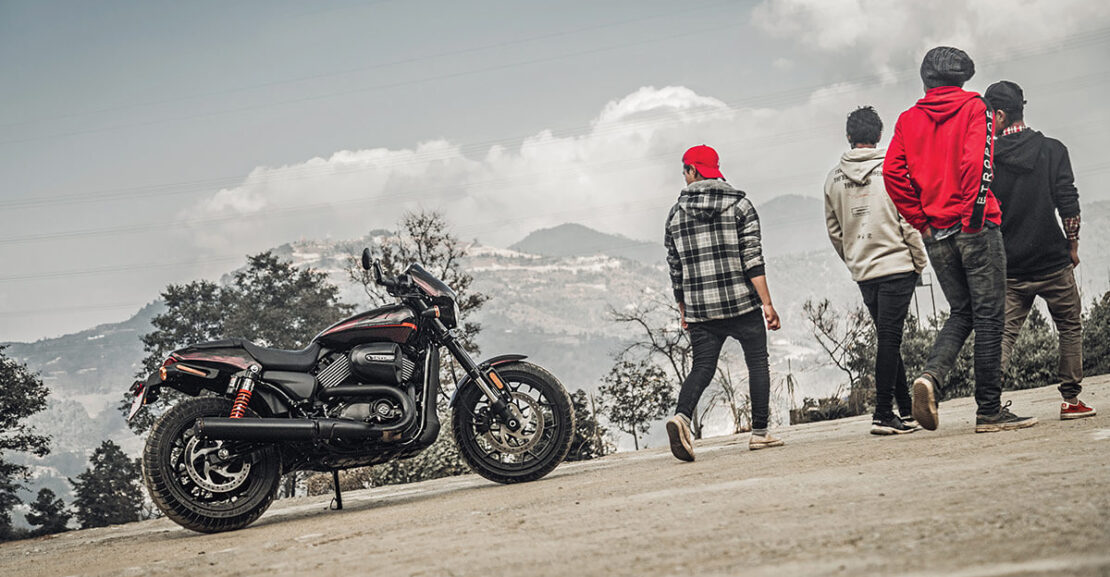 Few motorcycle brands can claim a following more loyal than that of Harley Davidson. It is a brand that carries a lot of creed, even for the non-bikers. Iconic and irresistible, it encapsulates so much with their unapologetic machines with an illustrious legacy spread over an endless assortment of touring, Softail, Sportster, and CVO family. However, the times they are a-changin’.

Enter the Street series – a different recipe that veered away from the traditional Harley styling to something that is more urban and sport-oriented. Introduced by Harley Davidson at the EICMA Show in 2013, the Street Series targets entry-level buyers in America and upmarket buyers in the developing markets. Available as a 750cc model, the Street Series bikes are lightweight, nimble and middleweight motorcycles build to take on city streets. And these are our thoughts on the Street Rod 750, the Street 750’s sporty cousin. 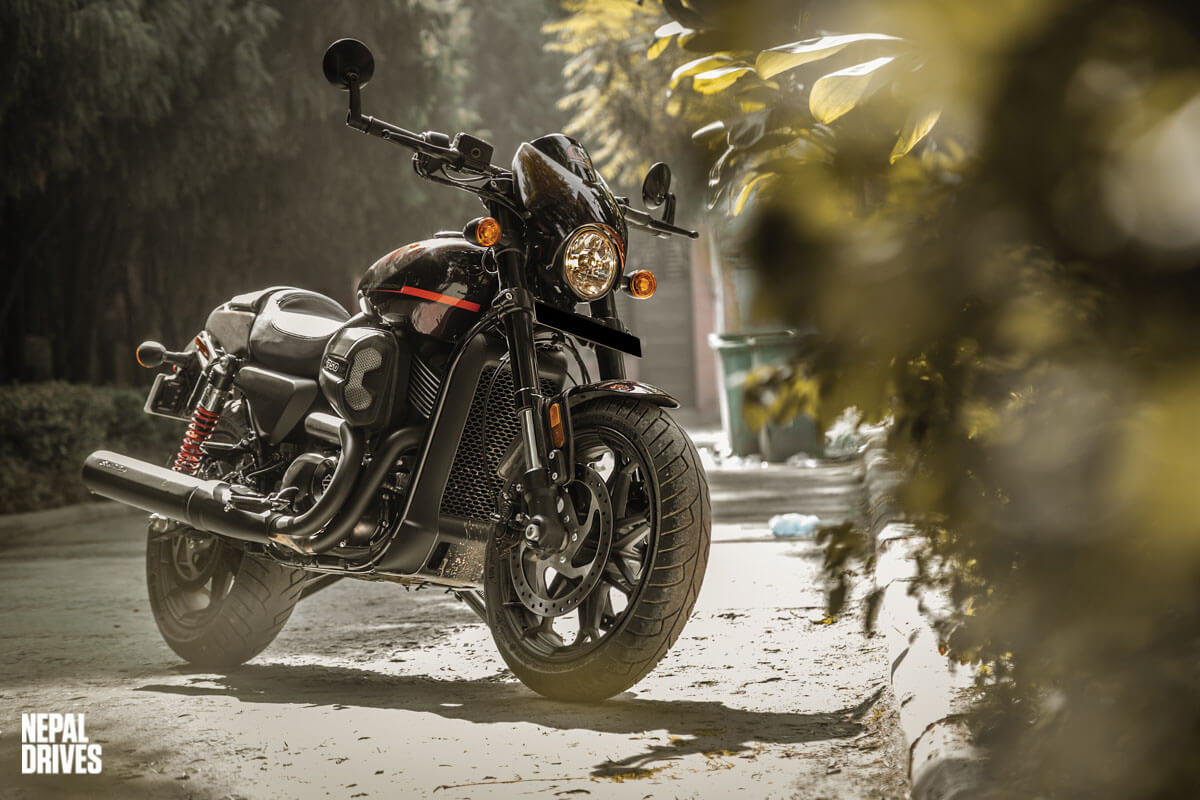 This visual mass has been accentuated by inverted, black-anodized forks, and triple clamps along with a new speed screen at the front. And the drag-style bars with bar-end mirrors, Screamin’ Eagle slip-on muffler, blacked-out finishes, and the 13.1-liter teardrop tank calls out for strict attention. 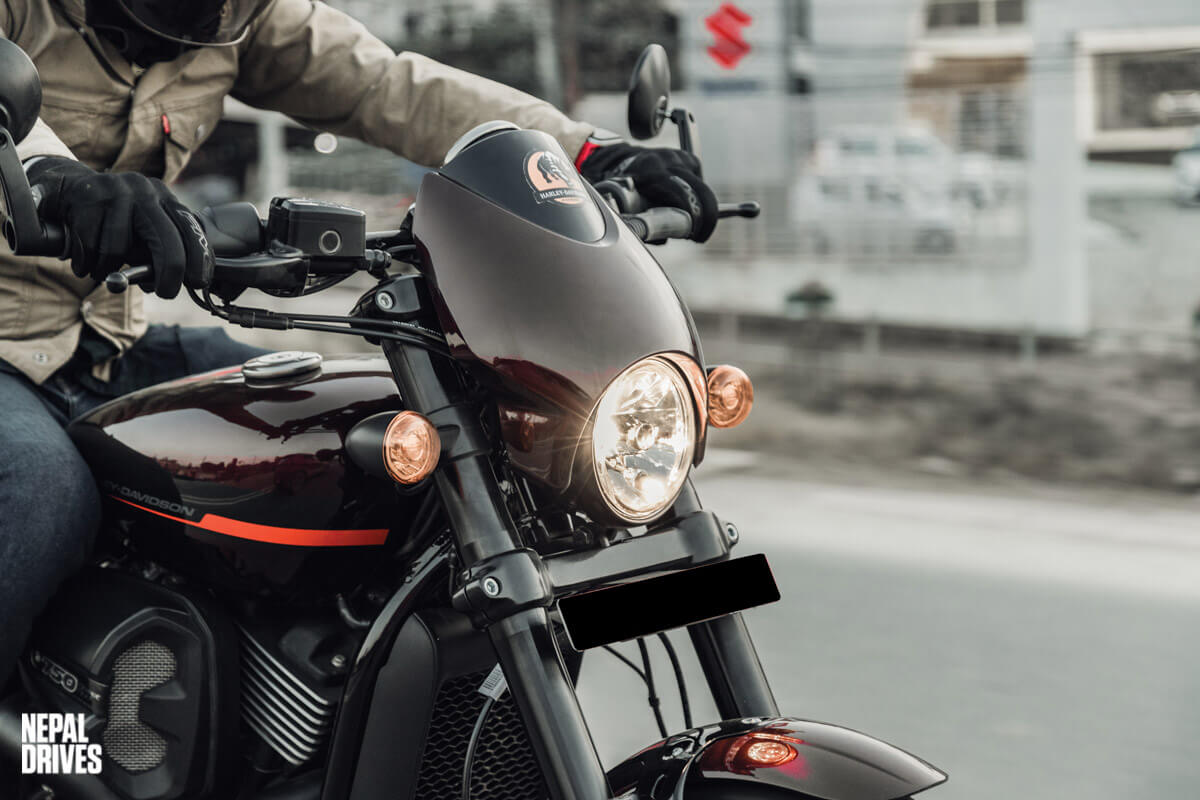 The rest of the bodywork is a tasteful blend of HD’s flat-track heritage, American drag racing, and streetfighter elements. 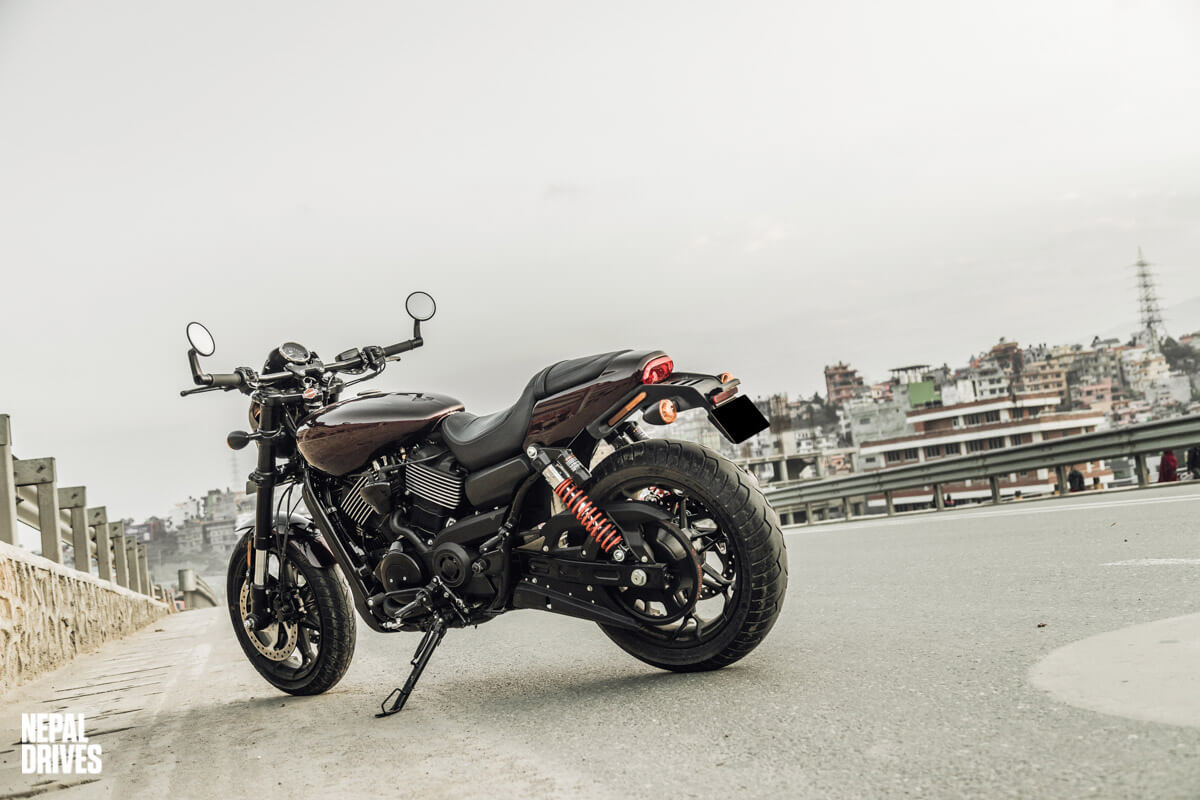 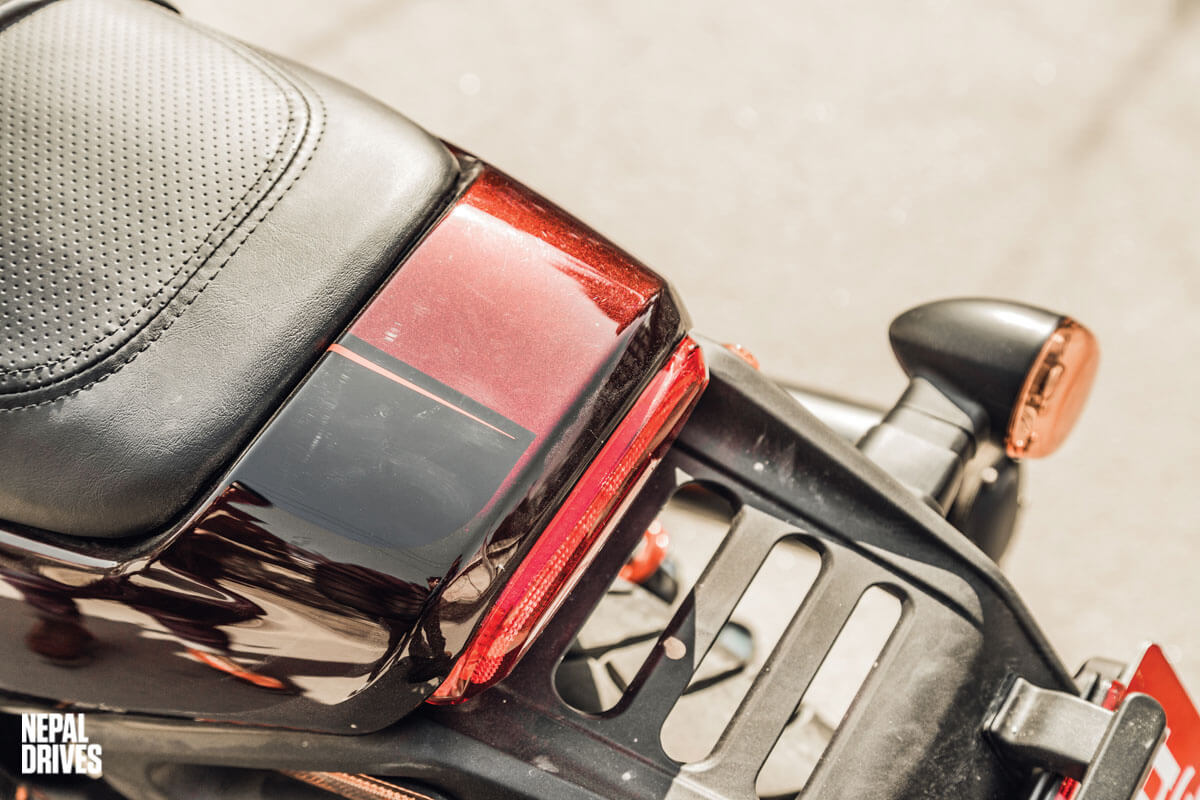 The new tail section gets a perforated rear mudguard and an all-new LED taillight with H-D signature lighting. The 2-up seat tail section provides the bike an athletic stance from front to back. Visually, the Street Rod appears meaner and more powerful than its more affordable sibling – the Street 750.

THE INSTRUMENT CLUSTER IS… 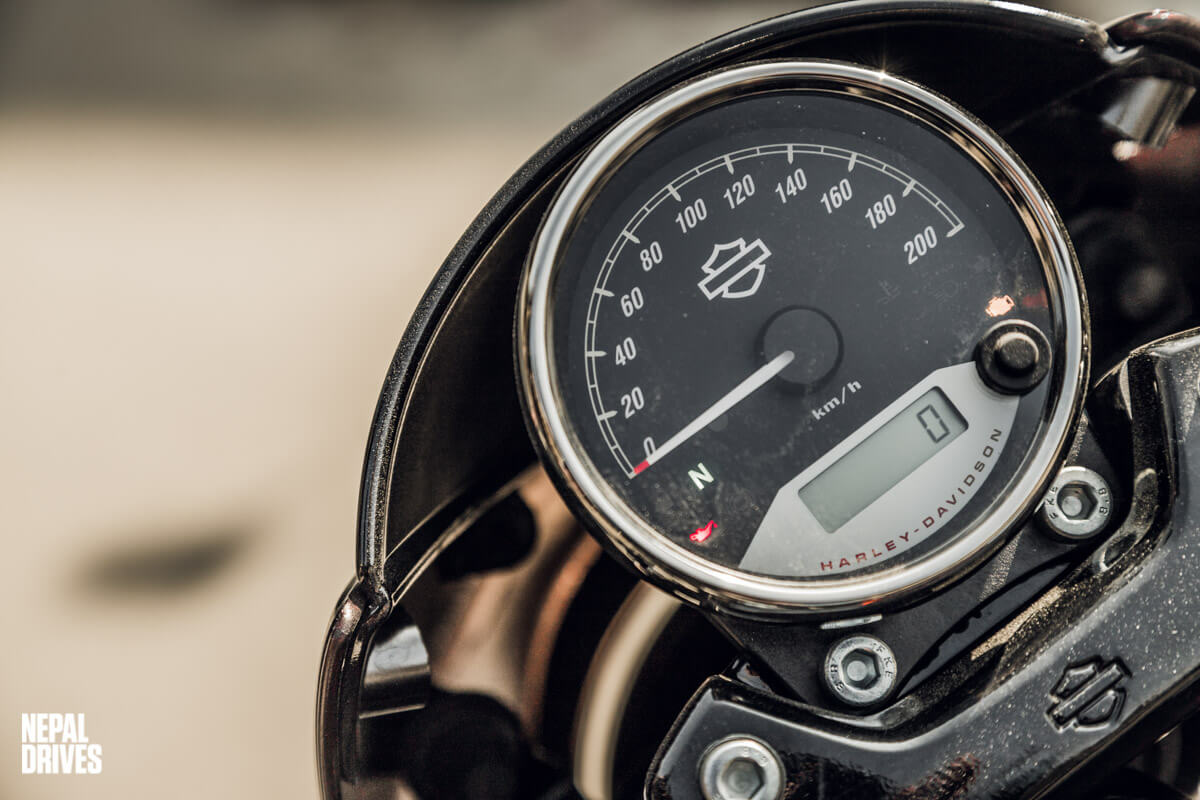 AT THE HEART OF THE MATTER….

is a 759cc liquid-cooled V-twin Revolution X engine from the Street 750, but re-tuned to produce 20% more power and 10% more torque, which results in 68 bhp at 8750 rpm and 65 Nm of torque at 4000 rpm. Harley engineers have bumped the compression ratio from 11.0:1 to 12.0:1, and the redline is increased from 8,000 to 9,000 rpm to maximize the mid-range torque. The new single overhead-cam V-Twin engine also features a larger airbox, new 42mm dual throttle bodies, revised four-valve cylinder heads, and high-lift camshafts, and a new exhaust muffler to enhance the airflow. 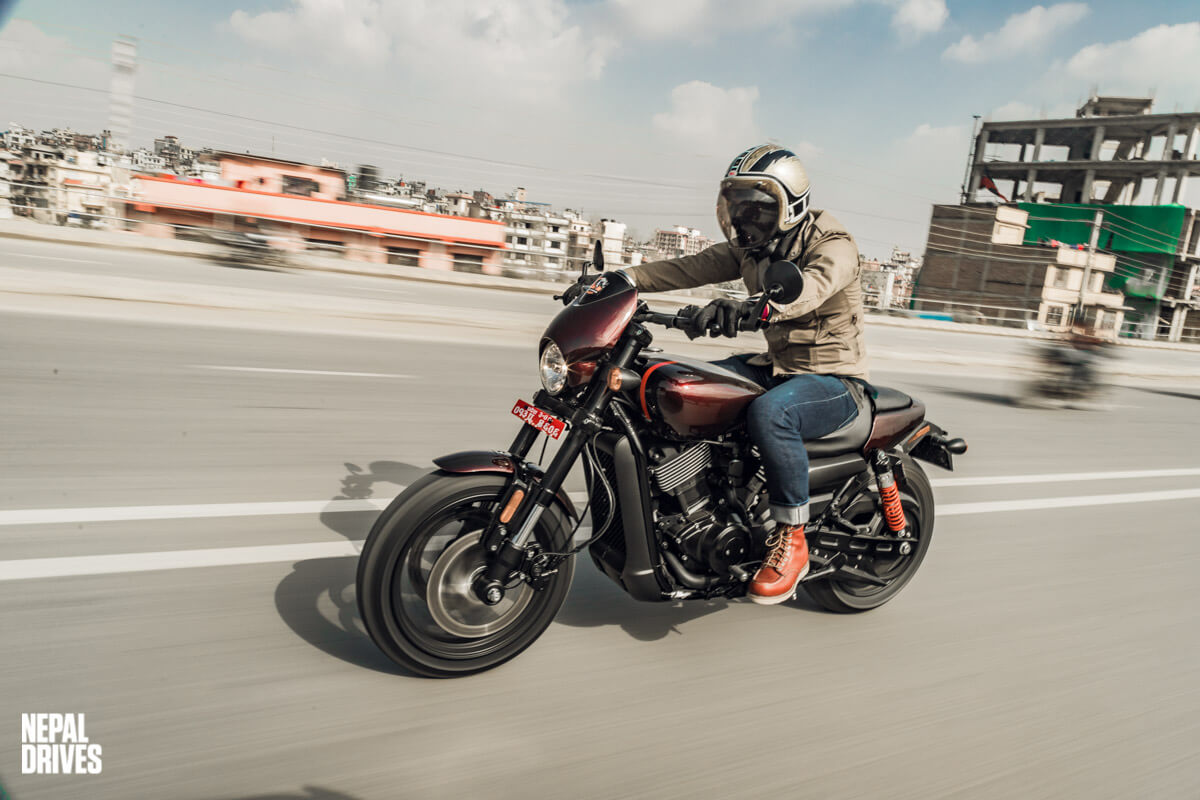 It does exactly what it says on the paper. The engine produces more torque through the mid-range and power at the top-end.

The sweet spot for the motor lies between 3000 and 5000 rpm, and a result is a torquey machine with extra revs at your disposal. You get plenty of punch from the high-revving motor right from the start. Although it doesn’t go lickety-split, you still beat the others to the draw before the ink is dry. 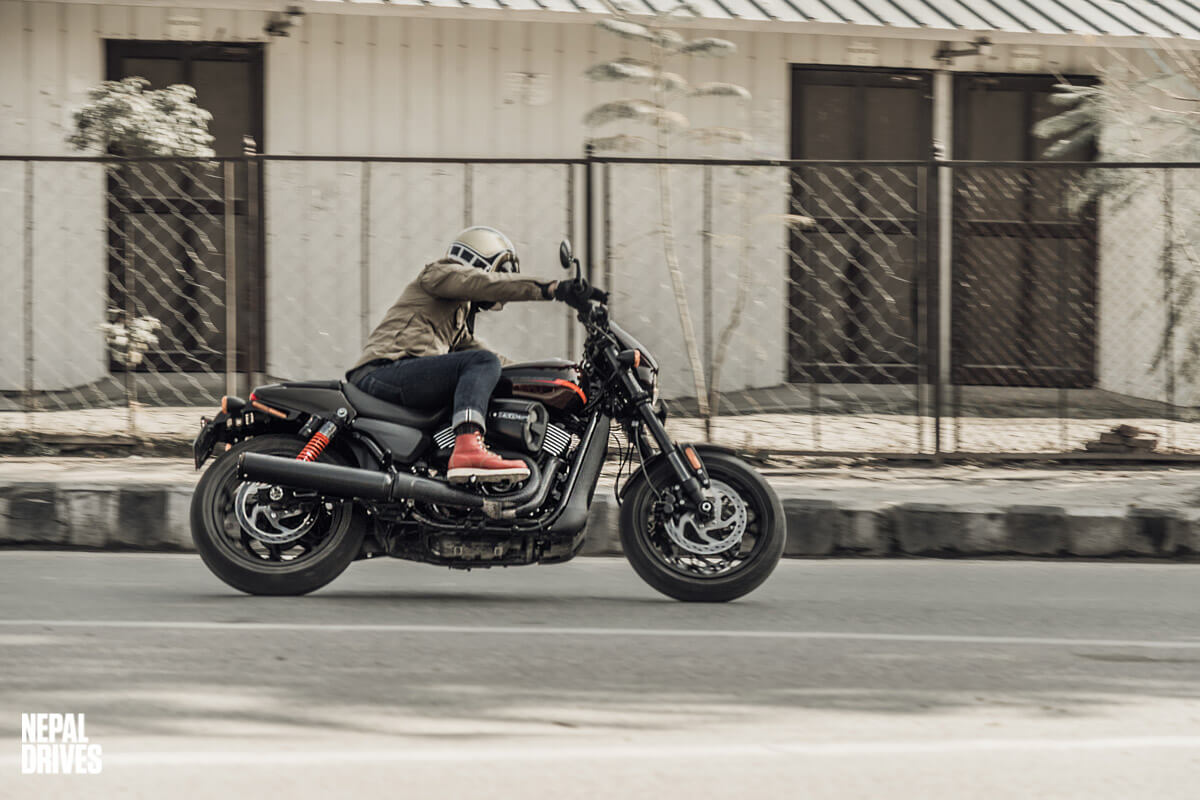 Once you wring the throttle, the bike leaps forward with a calm demeanor. Throttle response is great and power delivery is linear. There is no change in the six-speed gearbox which has been taken from the Street 750 with the exact same ratios. And, the exhaust note begs you to be heard even louder.

THE STREET ROD BEARS A ‘BULLDOG’ STANCE THAT IS…

poised and aggressive. Instead of sitting back in a relaxed position, you sit up on the bike in a forward stance and the flat handlebars ascertain this fact. The forward seating position is not really ideal for taller riders. Compared to the Street, you sit 45mm higher on the Street Rod, and the first thing you’ll complain of is the ergonomics. The seating position is cramped and the high set mid-mounted footpegs will take some time getting used to. 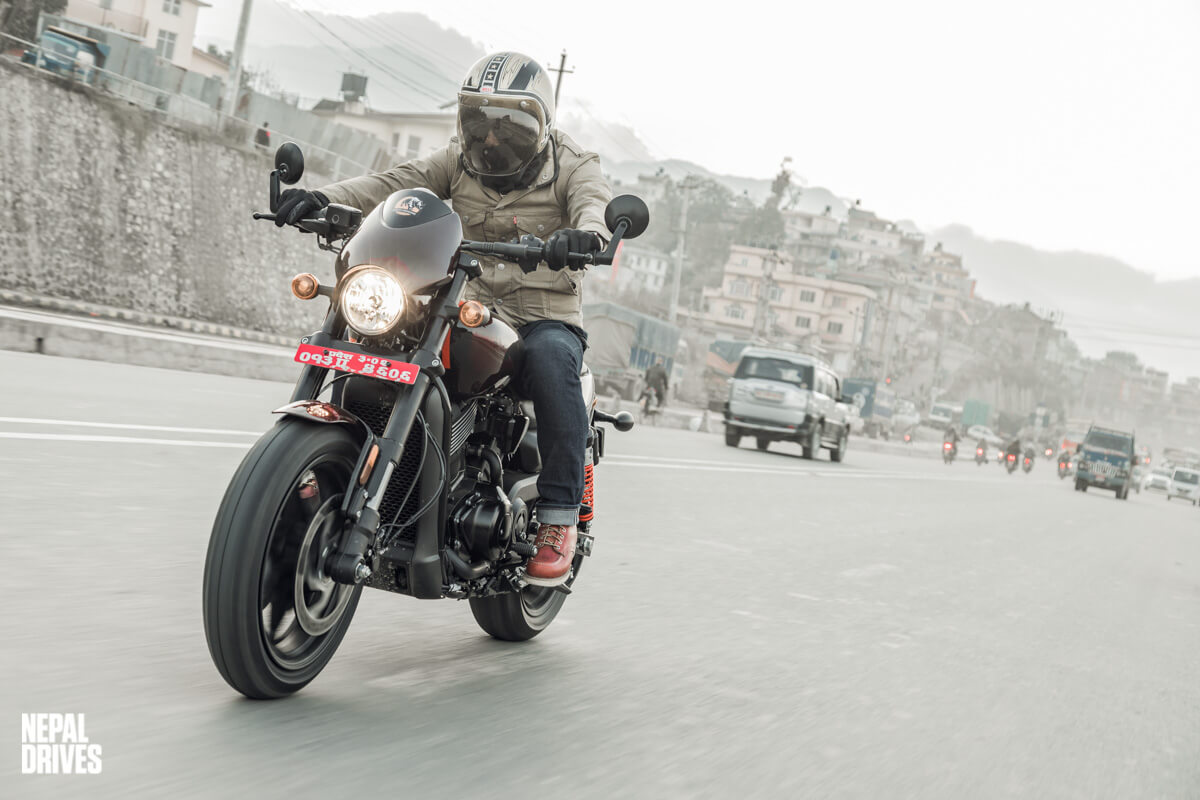 The rubber heel rest on the right exhaust is annexed to the top of the silencer shroud to mitigate the limited foot control placement, but instead of covering the rear brake pedal, you considerably waste your time trying to adjust your foot in the right position. This is the reason why we ended up using the front brakes more. Could the Street Rod’s handling outshine the uncomfortable ergonomics? 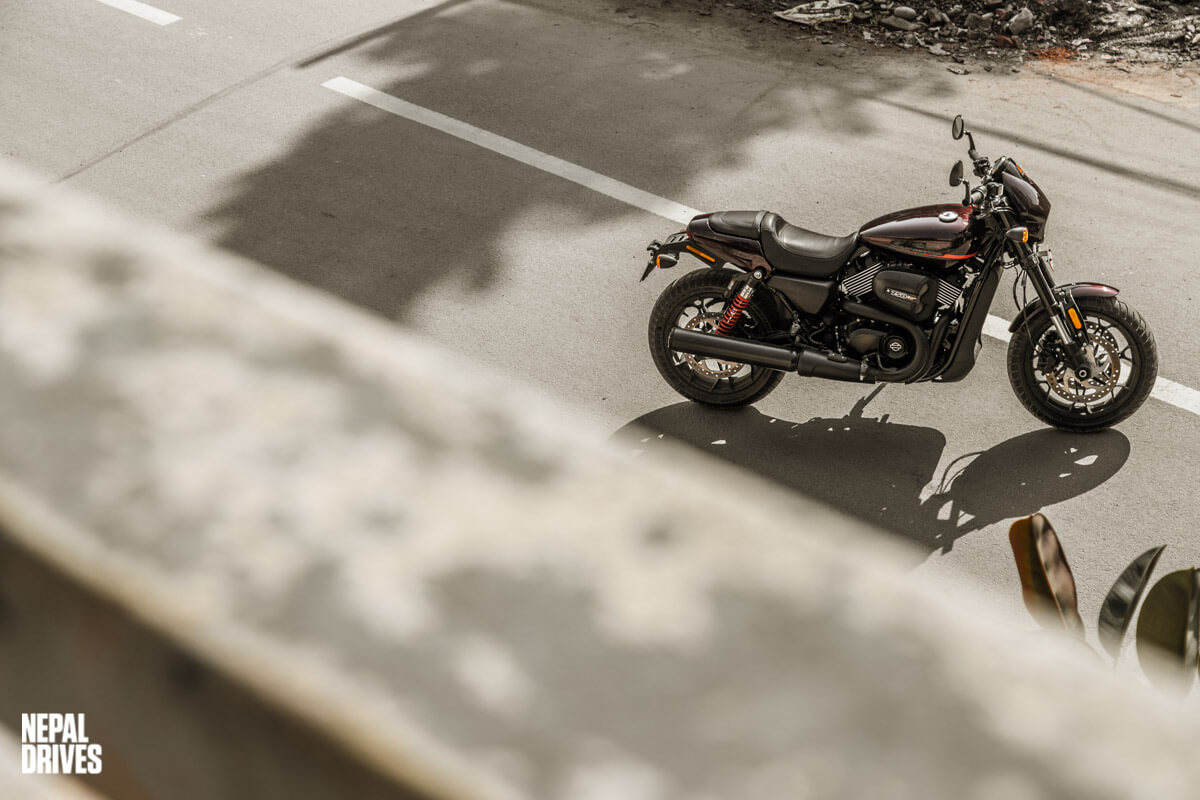 Could the Street Rod’s handling outshine the uncomfortable ergonomics? The Street Rod delivers handling that is light and precise at all speeds. While the Street Rod is easy to maneuver most of the time, the wide handlebars at times allow only modest room for lane changes in the urban jungle. Because the fork rake is tightened from 32° to 27° for quicker steering, the tighter steering geometry does make it easier to ride the bike through fast swooping curves. Hit the twisties and the bike encourages you to push it even harder. With a machine like the Street Rod at your disposal, you’ll want to hit highway speeds once in a while. 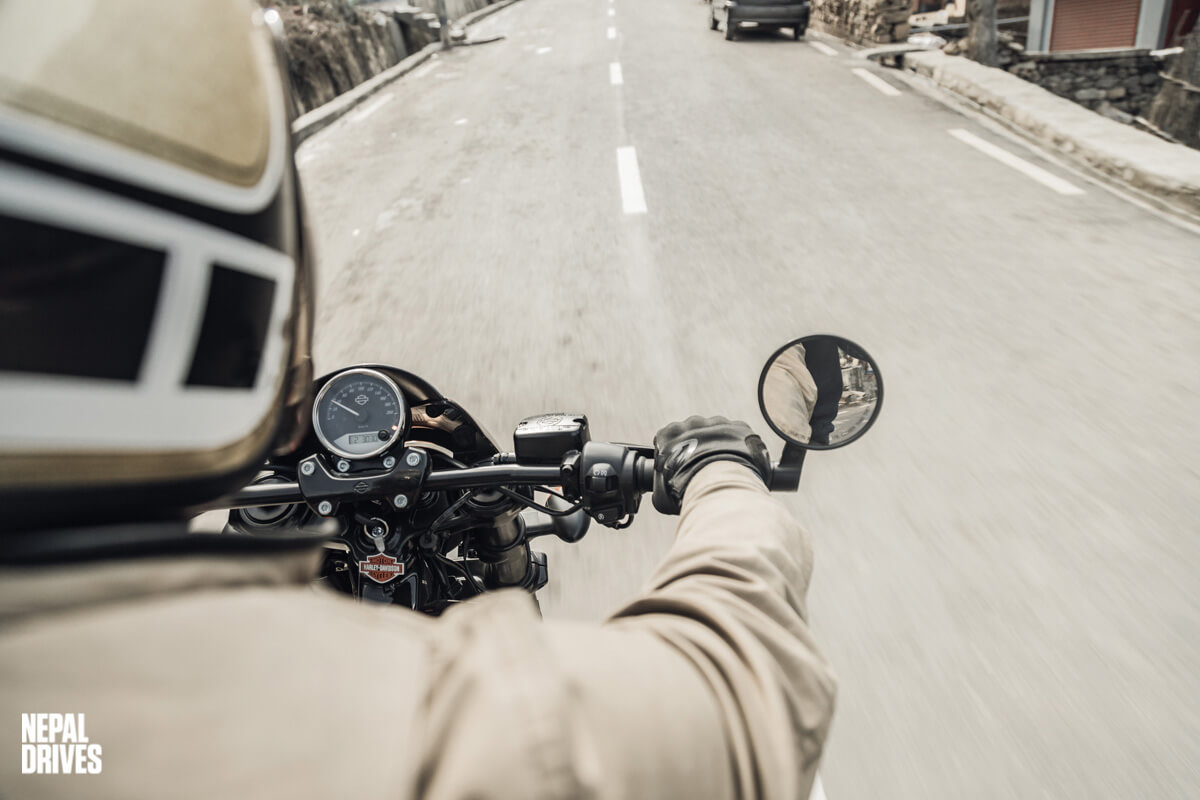 Out on the highway, dropping into the rare sixth gear is where the Street Rod really stretches itself. Everywhere else, it’s just a matter of selecting the right gear and letting the throttle do the talking. Although the Street Rod weighs 238 kgs, we had no problem handling the bike at cruising speeds. But, squirting in and out of rush-hour traffic can be a cumbersome task because of the heat. This is the only downside of the riding the Street Rod inside the city. Although liquid cooling helps maintain rider comfort in stop-and-go urban traffic, the higher compression ratio, as well as the proximity of the left thigh to the rear cylinder, feels very hot in the traffic. However, the Street Rod backs it up with its character and performance. 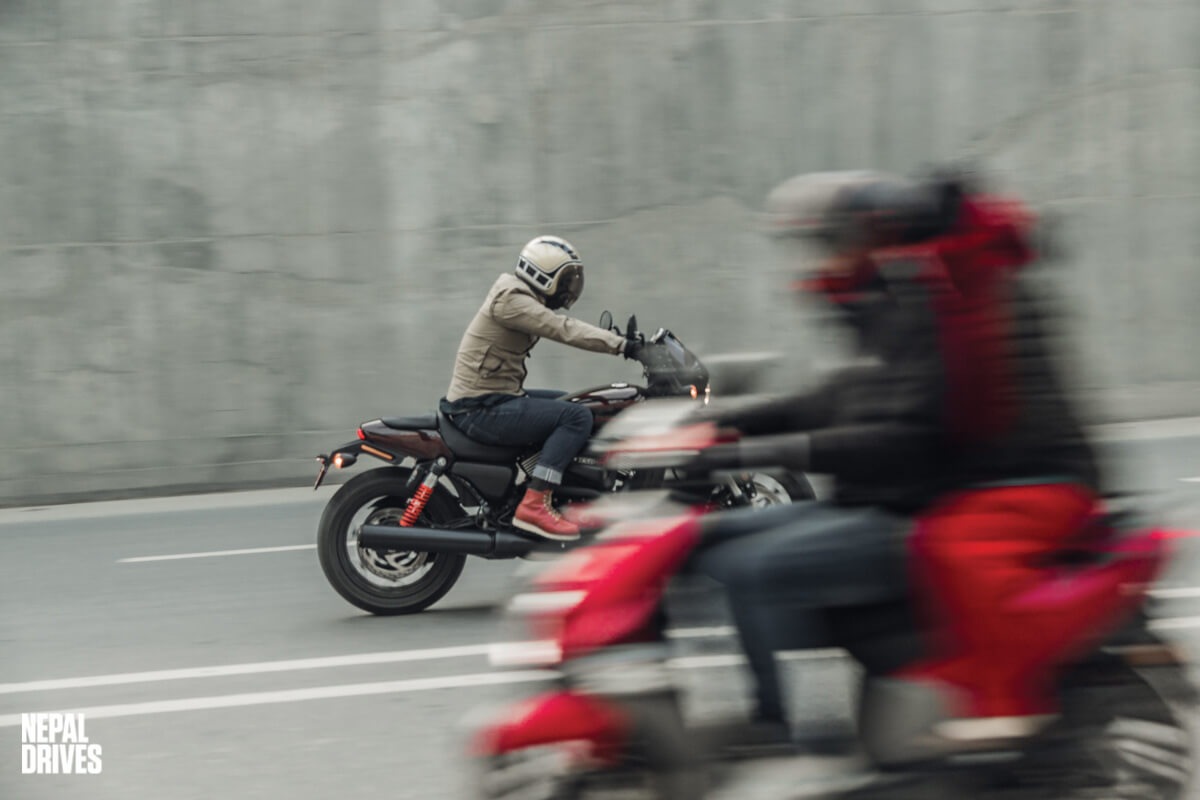 The suspension setup, for the most part, provides a comfortable ride, even on rough or uneven pavement. The front end features 43mm USD forks gripped by lightweight aluminum yokes with no adjustment. Coil-over piggyback shocks support the rear end with adjustable spring preload which can be adjusted with a standard wrench. The steel swingarm is slightly longer to accommodate the taller shocks and provide extra traction. 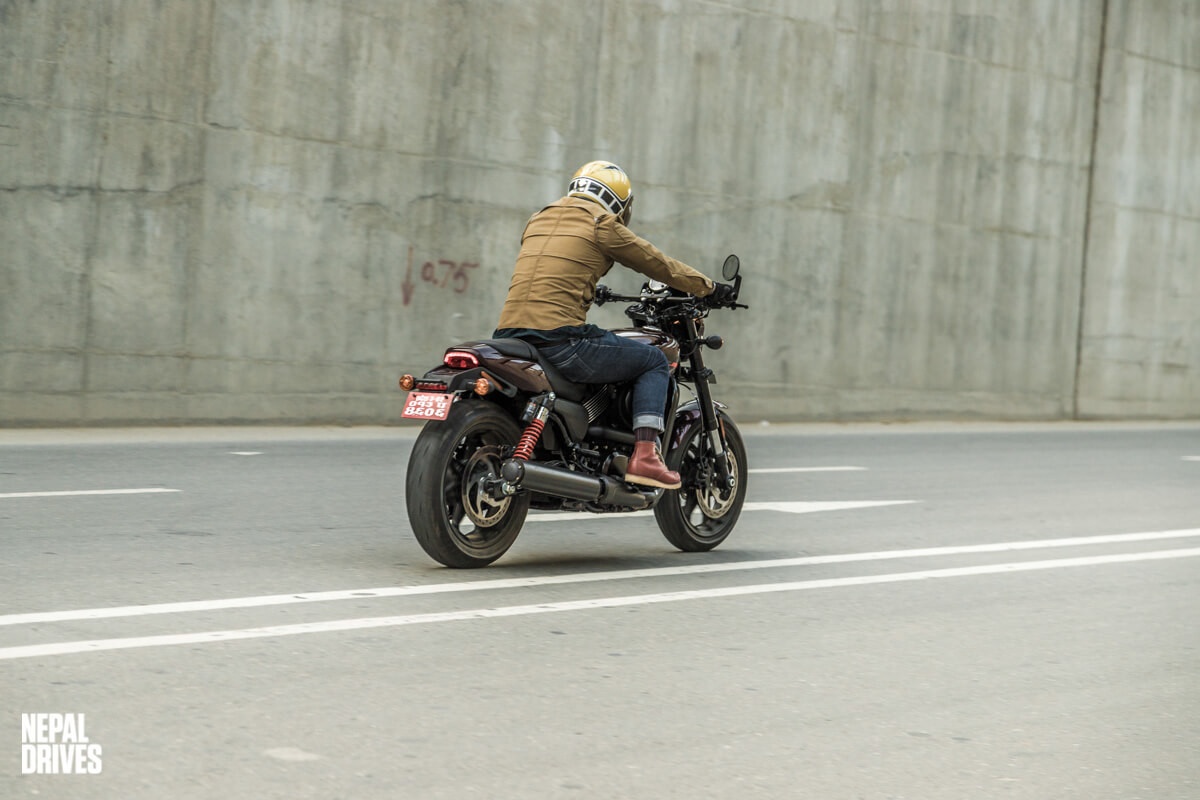 The Street Rod wears 17-inch front and rear cast alloy wheels and MRF rubbers – 120/70 rubbers upfront and 160/60 on back, facilitating for more lean, with 37.3 degrees to the right, and 40.2 degrees to the left. When it comes to braking duties, the Street Rod gets dual 300 mm rotors up front and the rear, with twin-pot calipers. Anti-Lock Braking System (ABS) comes as standard and its non-switchable. The brakes provide plenty of stopping power where you need it most.

We think the Street Rod is the most nimble motorcycle in the current Harley line-up in Nepal.

SHOULD YOU GET ONE?

The Street Rod is not your typical Harley Davidson. It may not have a macho or a rad appeal like other Harleys, but the appeal of the Street Rod is more along the lines of a performance-oriented machine with an authentic Milwaukee heartbeat. Whether you’re a beginner or an experienced rider, the Street Rod 750 will appeal to you with its sporty demeanor and a distinctive character. 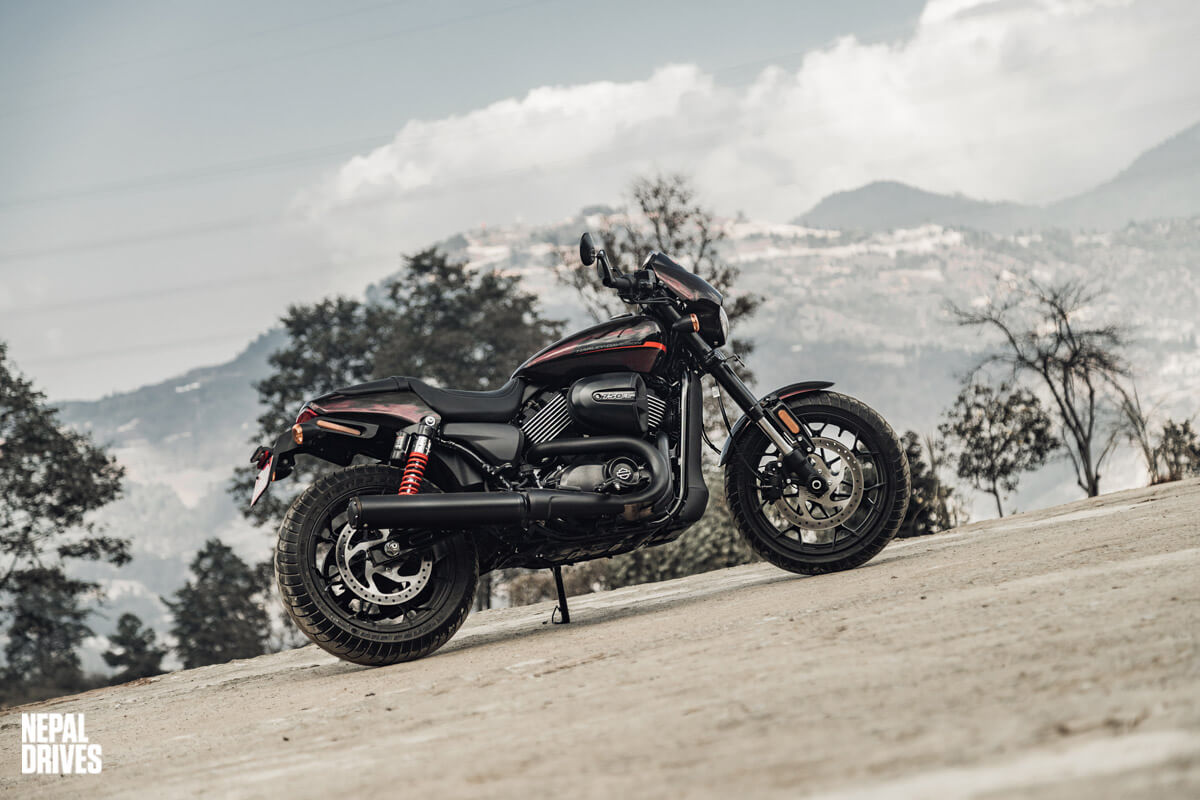 At Rs 27,00,000, the Street Rod is the second most affordable Harley-Davidson motorcycle in Nepal after the Street 750 which is priced at Rs 23,00,000. And, it is priced to be almost irresistible to someone looking for a starter Harley. But for us, we would still leapfrog to its big-bore brothers.