When KFC first opened in Durbarmarg people went berserk. So much so that they thought it would be worth their time to wait in a massive queue that spilled out of the restaurant and into the streets just for their bucket of delicious Kentucky Fried Chicken. Even some of the so-called elites, who wouldn’t be caught dead waiting in a line with commoners, bought into the fad and flung themselves into the frenzy.

Now, there is a perfectly reasonable explanation of this mad behavior over fowl carcass. It was not the actual chicken that lured the hordes of people. On the contrary, it was the idea of getting to eat a KFC; a global franchise known and loved the world over. And such reactions to western influence is not entirely new to the Nepalese community. Ultimately, the craze fizzled out and KFC is now just another one of the restaurants on the most pretentious strip of land in the Capital.

Fast forward to today; there is a new name in the market that has sent considerable reverberations throughout the market, especially so in the automotive segment. The introduction of Jeep, an iconic and legendary 4×4 vehicle manufacturer, has been causing a lot of commotion. People have been flocking to the showroom to get a look at the Jeep Compass (the only model from the company in Nepal). Many of them have even committed to purchasing a Jeep for themselves, and the company (distributed by MAW Pvt Ltd) have boasted of already having sold a 100 Jeep Compasses in a very short time. 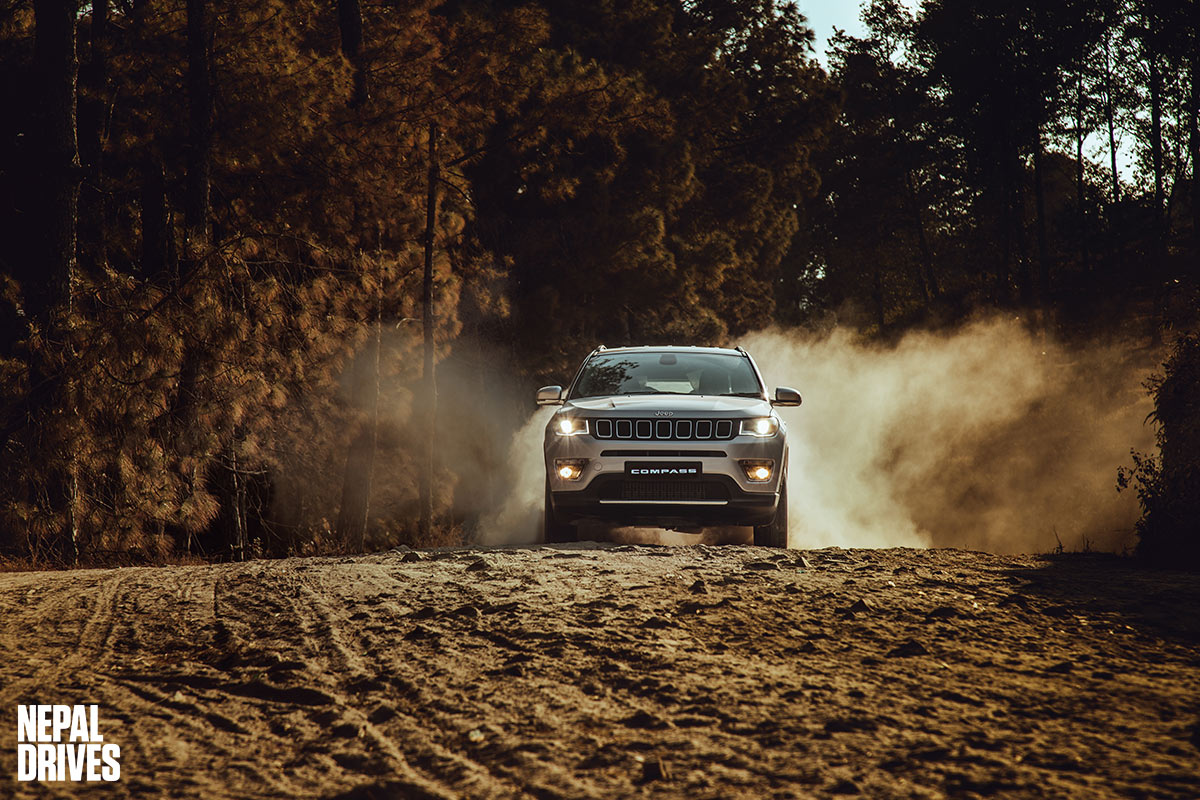 While this is eerily reminiscent of Nepal’s earlier obsessions over big names that come from the West, we firmly believe that this is different. For one thing, we aren’t talking about chicken. Jeep has amassed enough reputation to be exempt of any doubt that would have us categorize it straight into the fad directory. But, just to be sure, we had to take the Jeep Compass for a spin and give it a chance to prove itself in the proving grounds.

We will start by the most eye-catching feature, that front grille. The Compass comes with the legendary 7 slot grille, the one feature that has crowned all the Jeeps in the past and will in the future. The 7 slot is so popular that we’ve even seen other SUVs mimic the same look with aftermarket body parts.

Flanking this grill is a pair of imposing headlights with DRLs and projectors. While the fog lamps could be bigger, the entire front look with that large air intake makes for a really handsome face that will turn some heads. 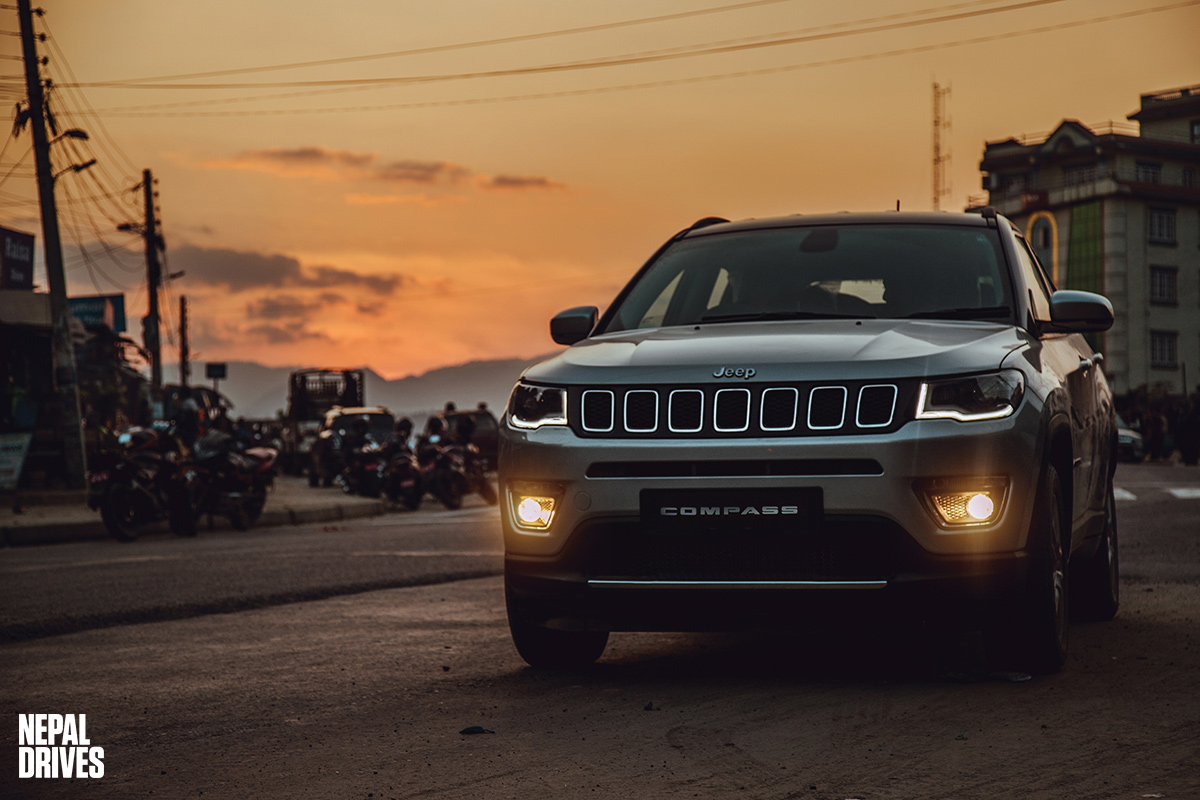 “Muscle” is the word for the Compass’ side profile. The bodywork on the side is governed by strong character lines and a window line that sweeps upwards. The fenders bulge out adding heft to the look and the squared off wheel arches add a rugged sense into the Compass. The roof stays true to the SUV mantra rather than following the coupe route which is always a good thing. Out on the back, things are less dramatic when compared to the front, which isn’t a bad thing at all. You get a smart tail light, and a rear bumper with reflector lamps smartly integrated into the bodywork. 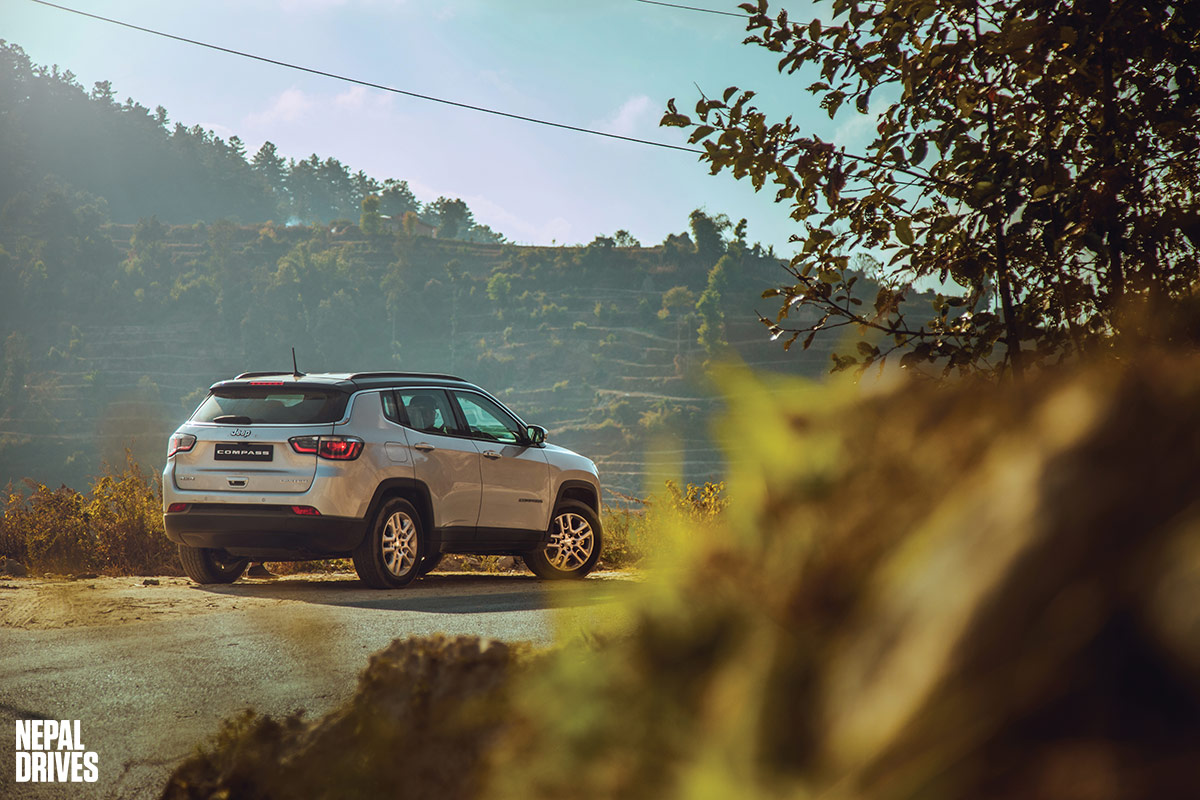 Overall, the Compass looks rugged, smart and handsome… from all directions (pun intended!).

As rugged as the exterior is, the interior is a completely different ballgame. Pleasant is the first word that comes to mind when you step inside the cabin and close the well-weighted door, the Compass has scored top marks in terms of comfort, features, and aesthetics. The interior receives a dual tone treatment and a good combination of quality plastic and soft-touch materials with more emphasis on the latter.

Every touch around the cabin will give you a premium feel, overall build quality and the fit and finish of every component is perfect. The seats are finished in dual tone leather, with adequate cushioning on the back and sides and especially the under thigh, long drives on this seat will be pain-free. On the passenger side, head, knee, and legroom are decent and the bench seat is comfy enough to make your passengers happy. 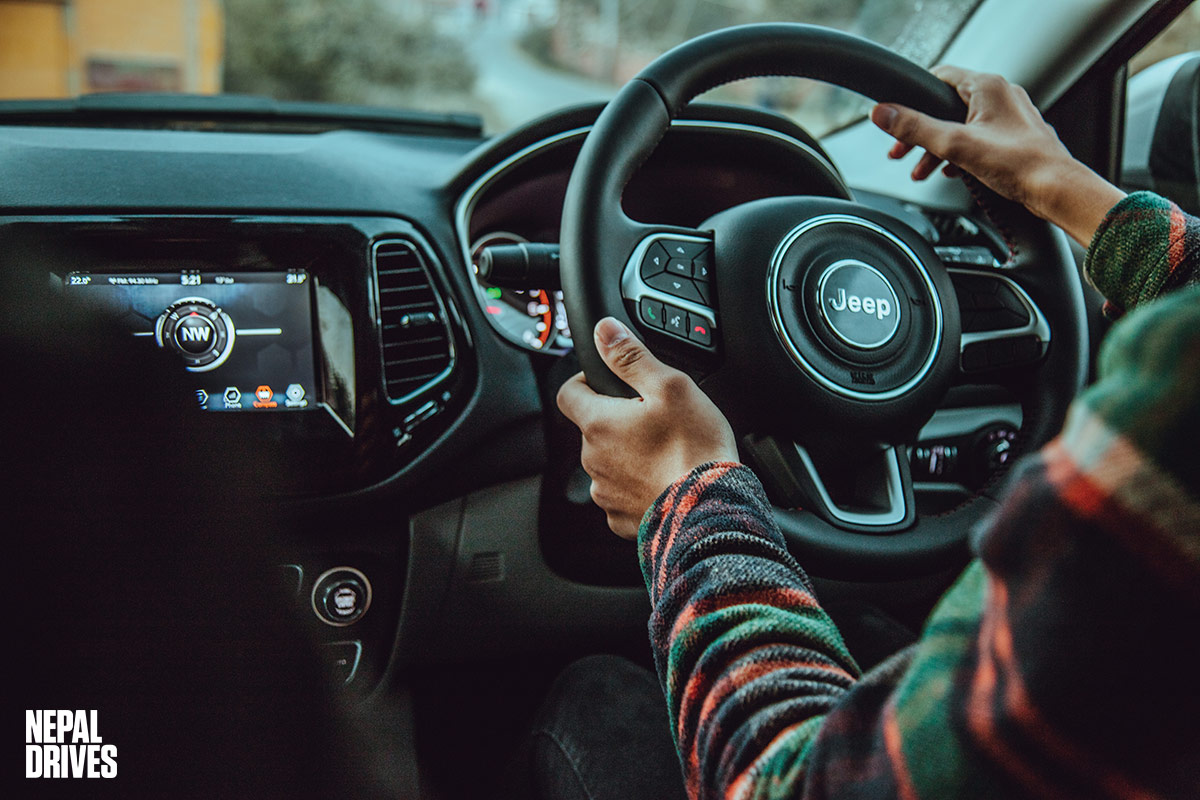 The Compass is equally teched out too, you get a 7-inch touch screen infotainment system with a larger screen offered in the Limited Plus variant. While a tad bit laggy, the “Uconnect” infotainment system comes with Apple CarPlay and Android Auto apart from all the features you’d ever want in an infotainment system. In terms of practicality, you will find storage spaces in all the right places and a boot that measures in at 438 liters which should be enough for weekend getaways.

The Compass comes with two oil burners on offer, there is a 2.0-liter 4-cylinder, turbo-charged “Multijet II” diesel that makes 175 BHP and a juicy 350 NM of peak torque. Also, there is a 1.4-liter, 4-cylinder, turbocharged “Multiair” petrol that makes 160 BHP and 250 NM of peak torque. The diesel is only available in a 6-speed manual while the petrol also comes in a 7-speed dual clutch automatic transmission. We drove the former variant of the Compass, and if you are looking buy one for yourself, we urge you to spend the extra cash and get the diesel variant.

Not because the petrol variant is bad, but the diesel is so amazing. 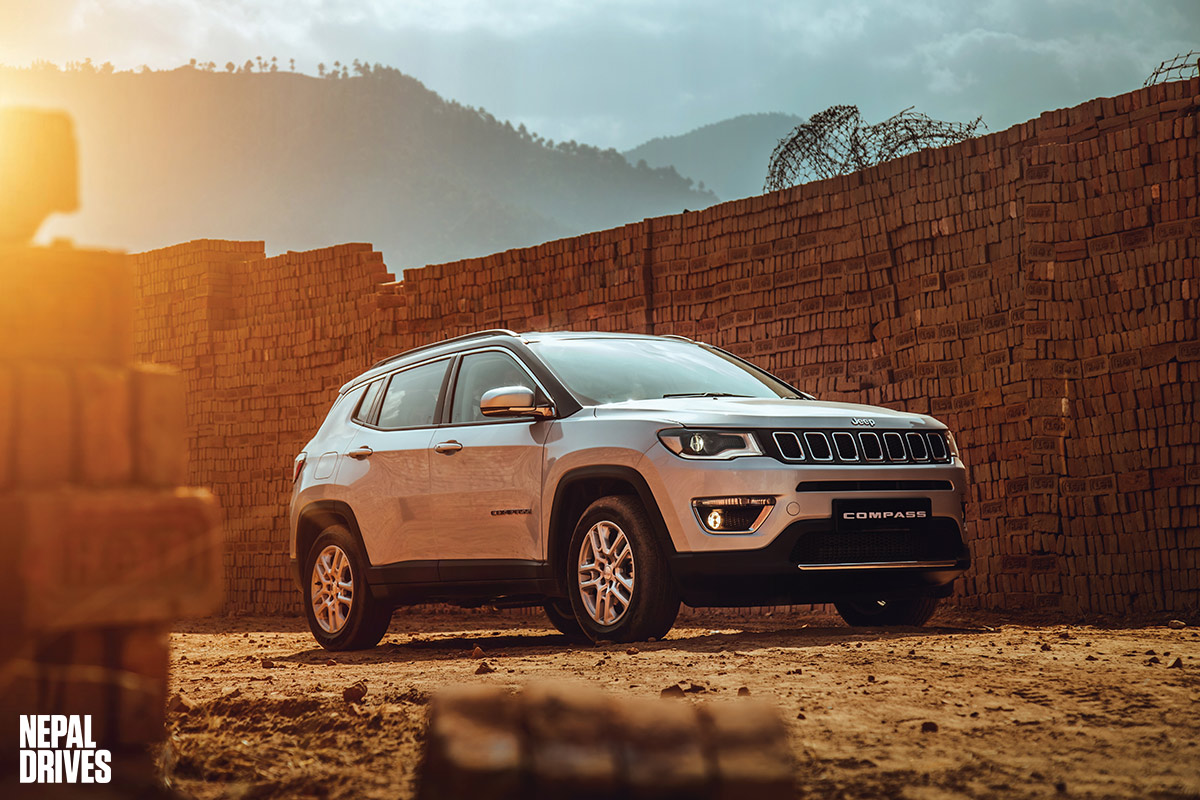 The power is instantaneous, the vehicle pulls aggressively and hits triple digits in no time. The steering provides good feedback and is precise, the clutch is light, the gear throws are long and the accelerator is only a light dab away from powering through an overtake. All this makes for an easy downtown commute and raging highway runs complete fun. Handling is tight in the Compass, the suspension is tuned for high speed turns, the Compass is poised to hit a corner hard and come out of it without any body roll. 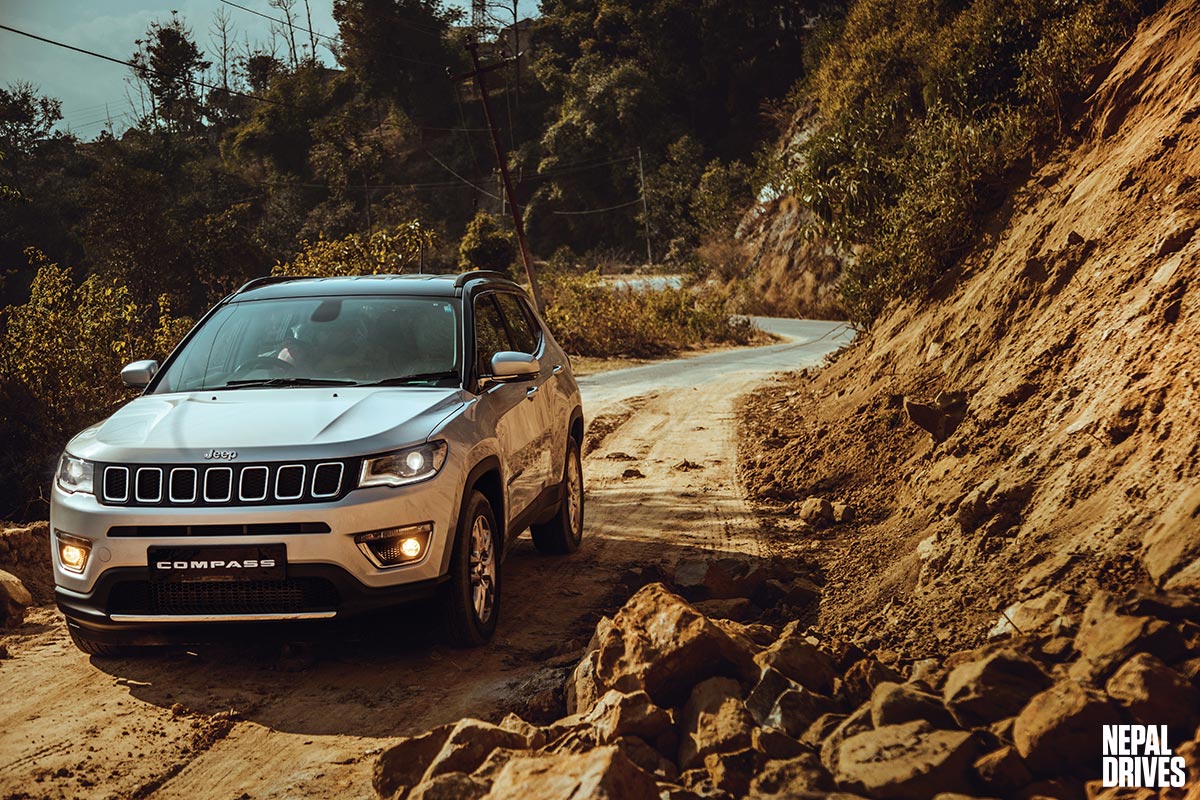 The vehicle is planted and handles the Nepali roads with total ease. While the Compass is good on the tarmac, it is still a Jeep, and to be a Jeep, you have to be better off-road and the Compass doesn’t disappoint. The Compass comes with “Selec Terrain” system, which offers on-the-fly traction modes like- Auto, Snow, Sand, and Mud at the turn of a rotary knob. The AWD system makes sure that you don’t get stuck when the going gets tough. 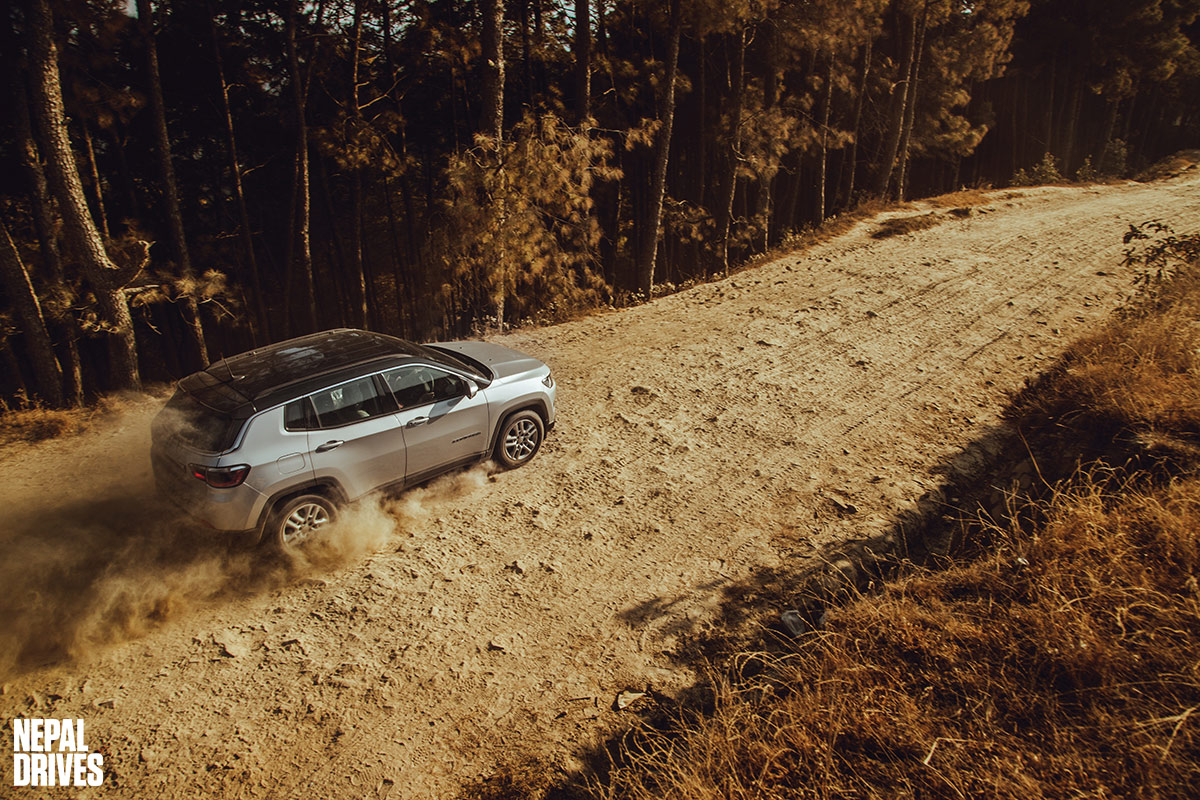 Rest assured, you will have no problems wading waters, hitting inclines, rambling through slush tracks, blazing through slippery grass and crawling over rocky terrains when you are behind the wheel of the Jeep Compass.

Our review has helped further ascertain our assumptions. The Jeep Compass is not just another fad from the US. It lives up to the hype that the Jeep name has garnered for itself and it certainly defines itself as a top contender in the segment. We would have loved it if all the variants were more linearly spec-ed out, the lower variants might have a difficult time establishing a strong value for money proposition. 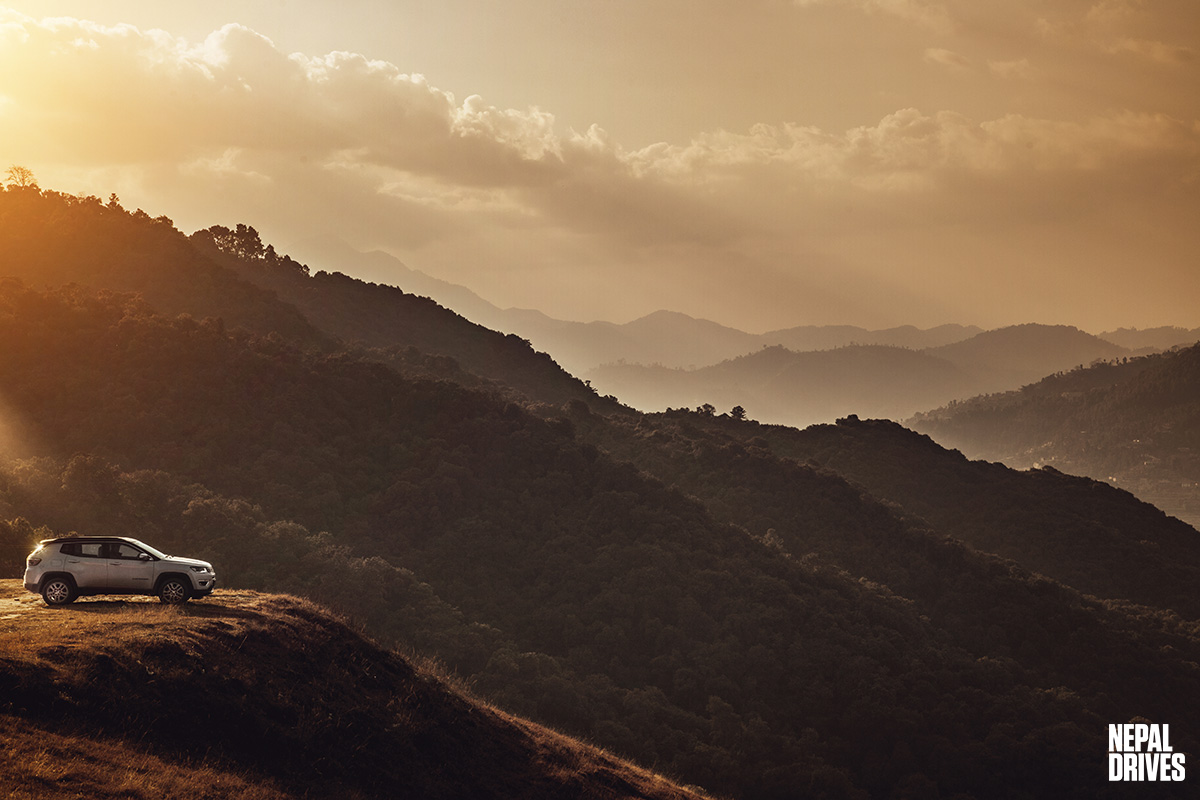 However, the top variant diesel engine we tested took our heart. The Compass is a vehicle that is sure of itself, whether it’s in the city, the twisting highways or off-road terrain. Feature packed and ready for action, this is a craze we are more than willing to be a part of.