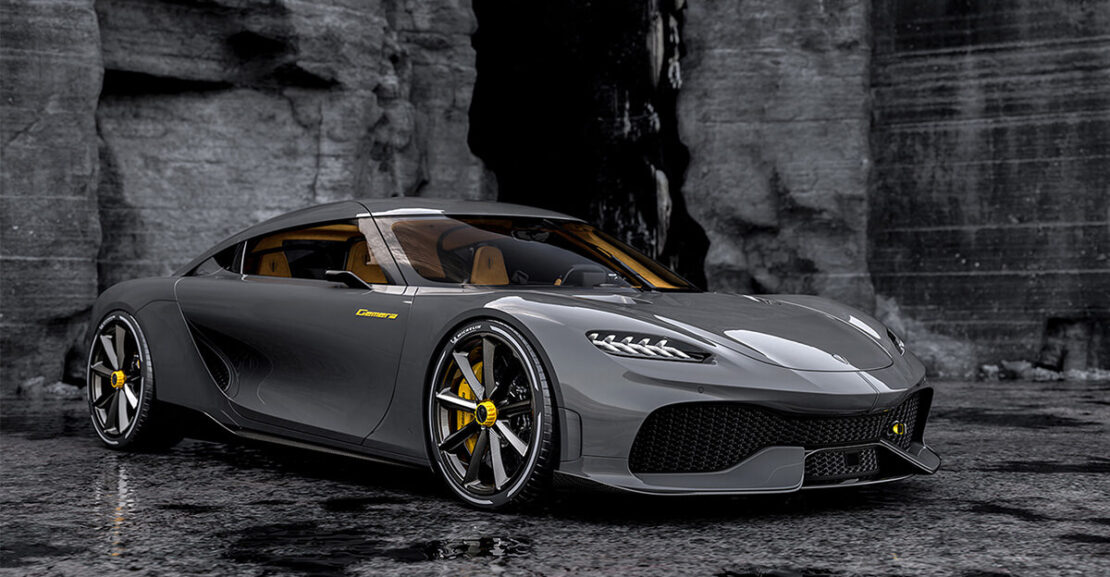 Ultimate performance has belonged to the world of two-seaters with very limited luggage space – until now. The Gemera is the world’s first Mega-GT and Koenigsegg’s first four-seater. The notion behind Gemera’s name – a combination of the two Swedish words – “ge” (give) and “mera” (more) signifies “to give more”. A suitable name for a car that adds features and functions without taking away anything that makes it a true megacar. 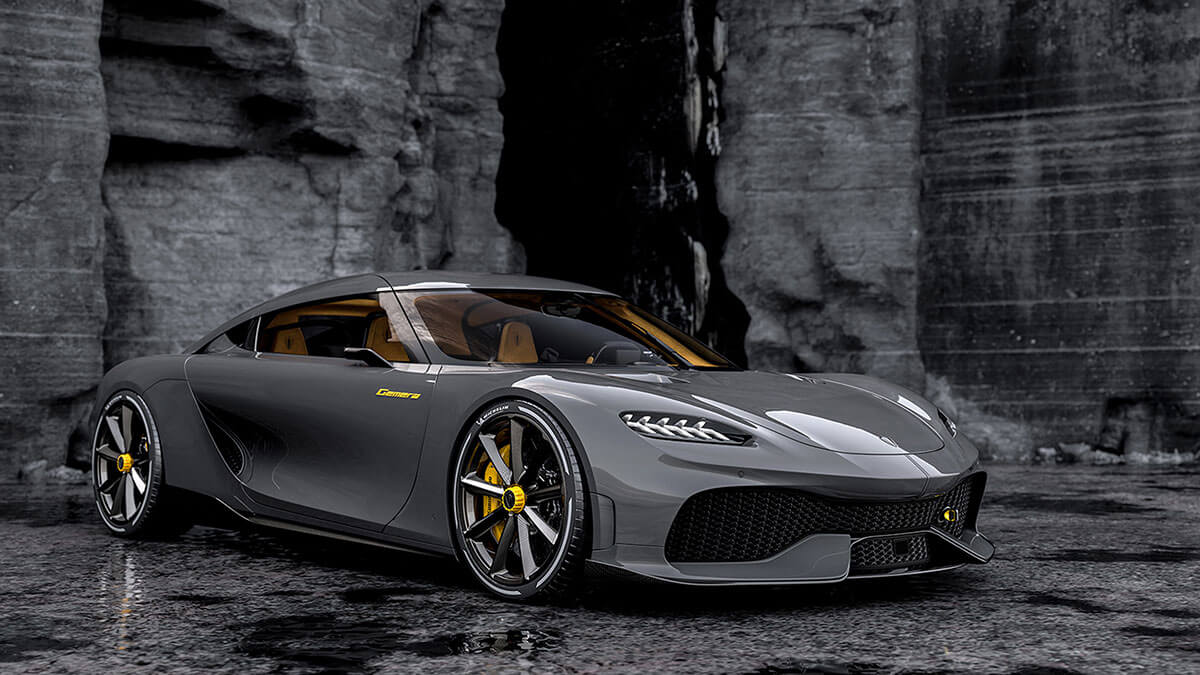 The Gemera is the first of its kind in a completely new vehicle category. Still, it has clear ties to all previous Koenigsegg cars and their Swedish and understated design roots. The Gemera maintains many recognizable Koenigsegg traits like its wrap-around jet fighter inspired windshield, the hidden A-pillars, the simple shapes, the short overhangs, and the large side air intakes. The front design is inspired by the first-ever Koenigsegg prototype – the Koenigsegg CC from 1996. 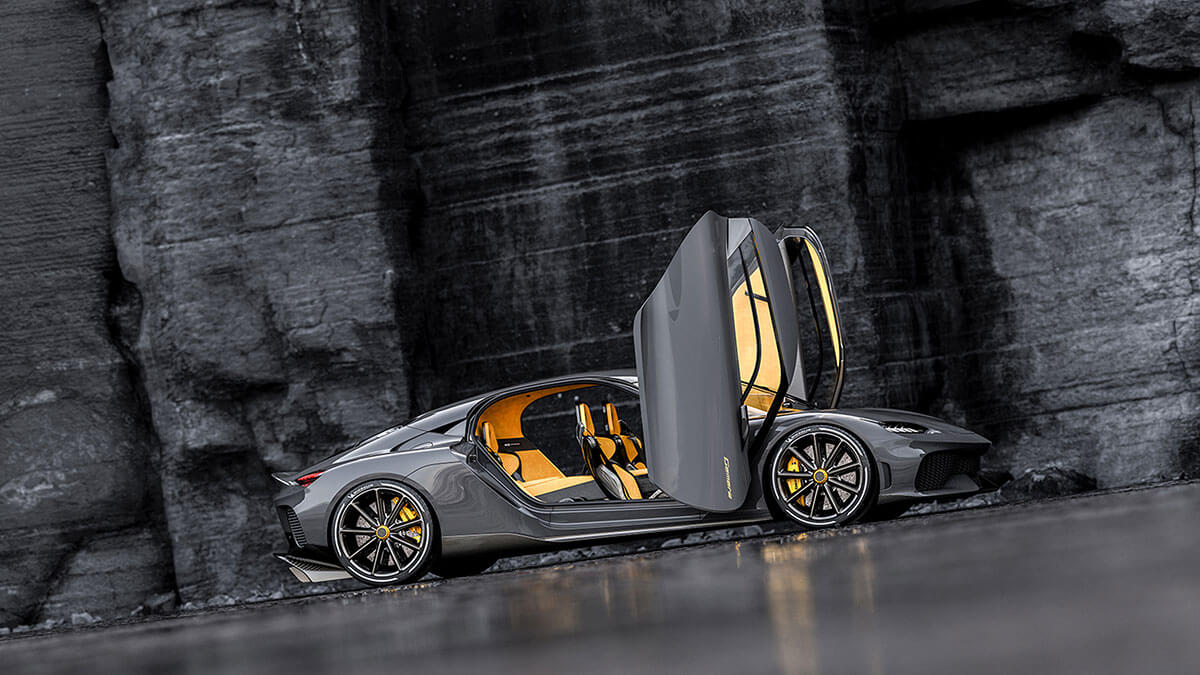 The Gemera features giant full-length Koenigsegg Automated Twisted Synchrohelix Actuation Doors (KATSAD) that open wide. The doors are unhindered by the absence of B-pillars, thanks to a strong carbon monocoque. The door openings reveal an impressive four-seater space that boasts equal ease of access, comfort, and respect for both front and rear passengers. The Gemera seats four large adults comfortably with space catering to their carry-on luggage. 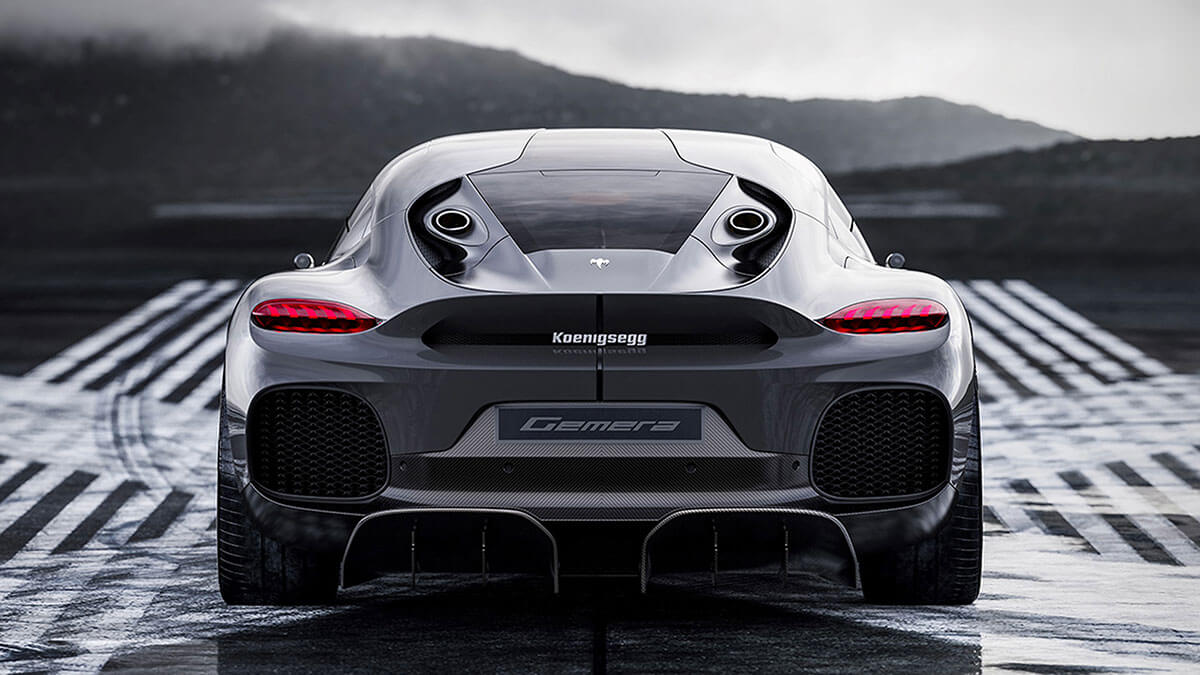 Despite being a four-seater, the Gemera easily outperforms most two-seat mega cars, both combustion and electric. Still, the focus of the Gemera is taking on long-range public roads – family trips, in comfort, style, and safety with never-before-experienced performance. The Gemera yields a combined power output of 1700 bhp or 1.27 MW  and 3500 Nm of torque, the Gemera goes from 0 to 100 km/h in 1.9 seconds and to 400 km/h in under 20 seconds. 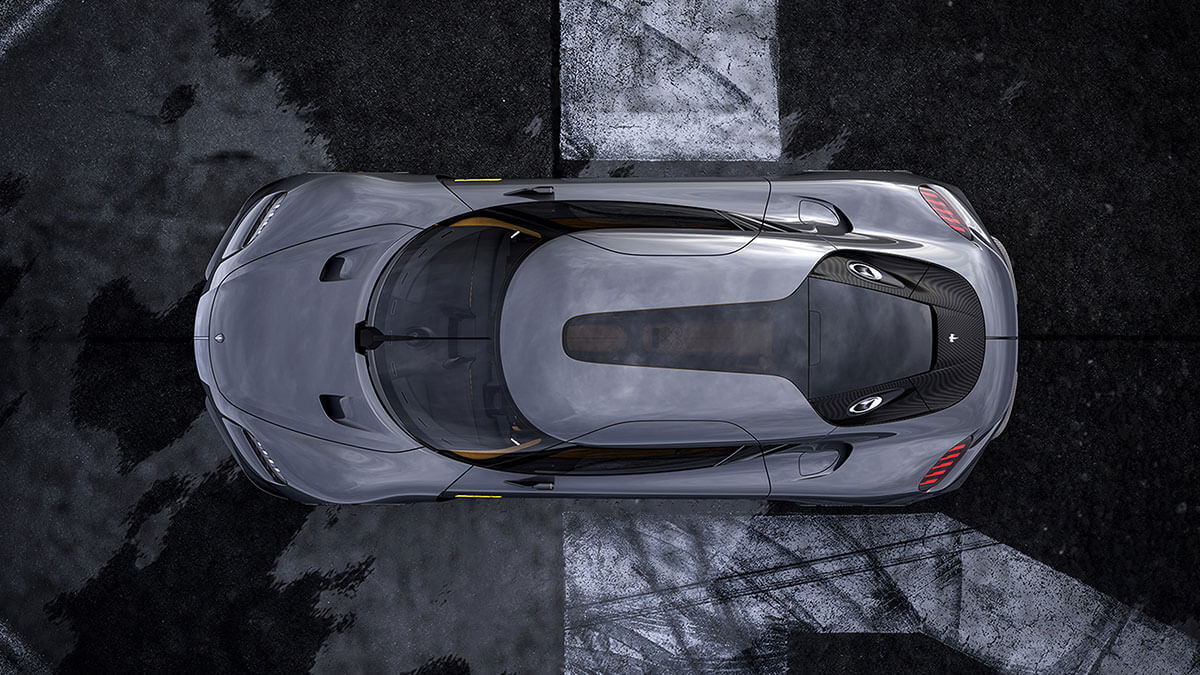 The three electrical motors – one for each rear wheel and one on the crankshaft of the engine have a combined output of 800 kW or 1100 bhp. The Gemera’s 2-liter 3-cylinder dry sumped twin-turbo Freevalve engine named the Tiny Friendly Giant (or TFG for short) adds another 450 kW or 600 bhp. 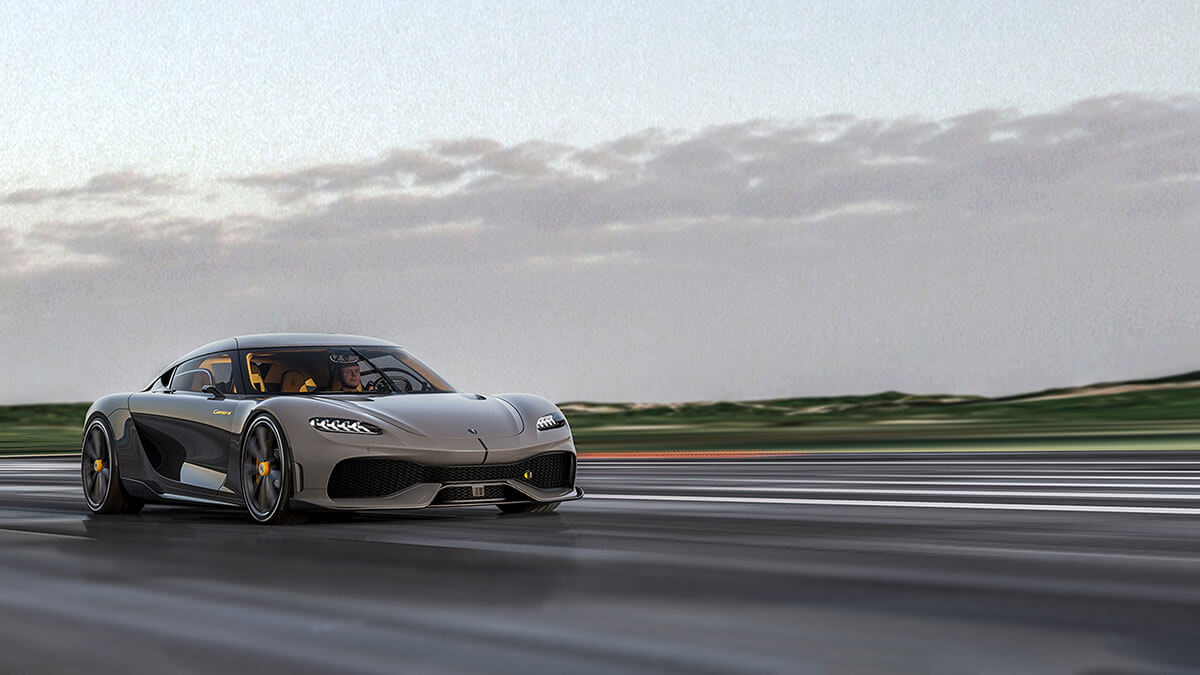 The TFG is a progressive outlook on the powertrains of tomorrow. The TFG offers a lighter, more efficient cradle-to-grave solution compared to any combustion engine before it. Combined with electrification, the Gemera can be argued to be cleaner than a long-range EV, by using next-generation combustion technology designed for next-generation renewable liquid fuels, together with a small battery plug-in electrification. 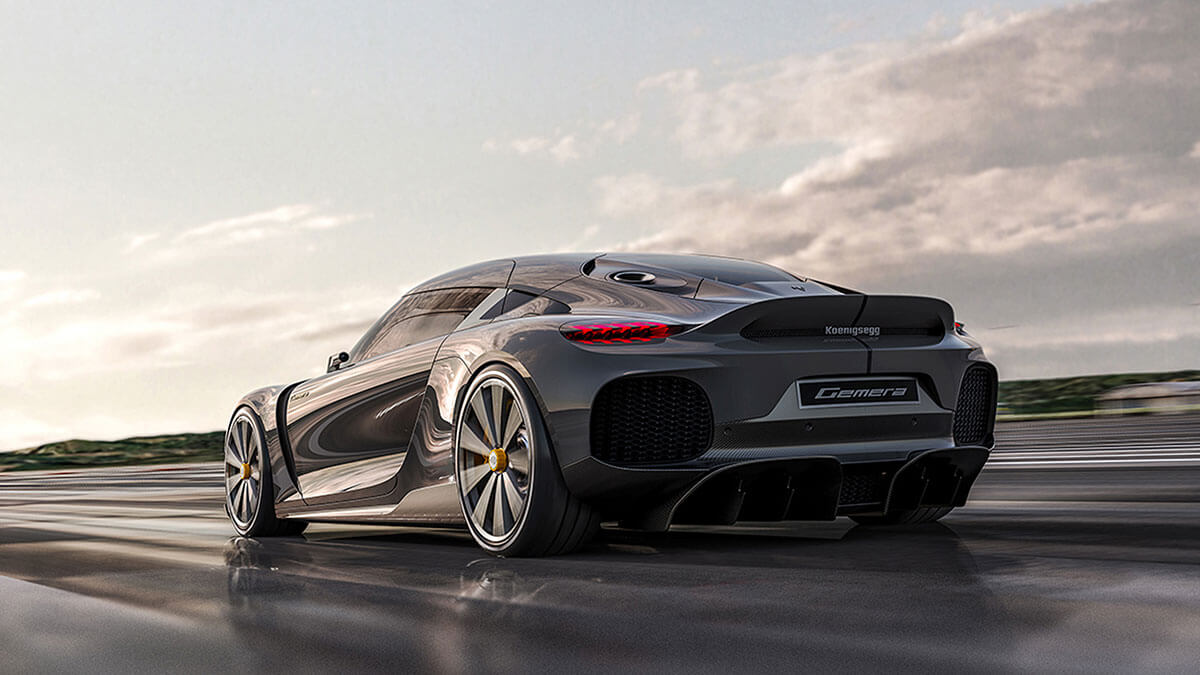 The Gemera, if plugged in and filled with Gen 2.0 ethanol or CO2 neutral methanol like Vulcanol or any mix thereof, becomes at least as CO2 neutral as a pure electric car. Before these second-generation renewable fuel sources are more accessible, the Gemera can also be driven on E85 and in worst case normal petrol. Equipped with three electric motors, the Gemera can drive completely silent up to 340 km/h, and the powerful 800V battery offers in itself a range of up to 50 km. 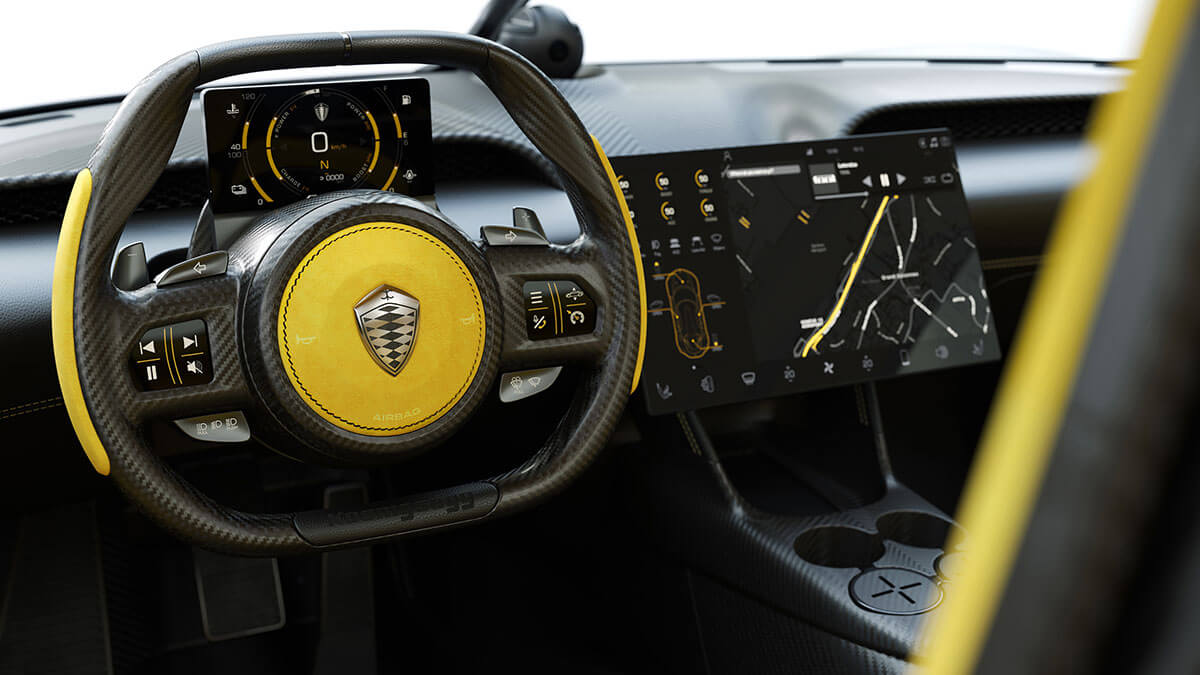 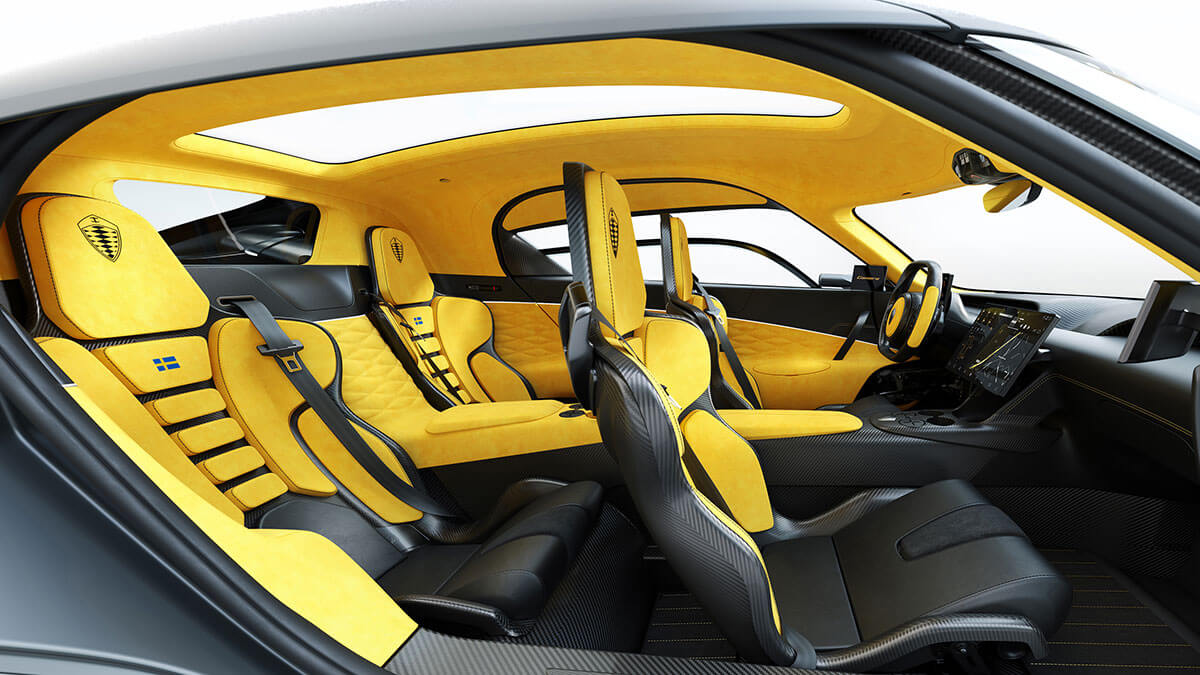 The Gemera has a very strong carbon fiber monocoque, six smart airbags, stability control, TC, ABS and ADAS 2.5. It lacks nothing in ultimate safety. The all-wheel steering and all-wheel drive and all-wheel torque vectoring give the Gemera maximum opportunity to offer a safe, stable and exhilarating drive. ISOFIX is available for both rear seats. The Koenigsegg Gemera will likely cost upwards of $1 million, and with only 300 being built, you’ll probably never see one on the road.