What is an auto show without at least a few exciting launches? And boy does this year’s NADA Auto show deliver! Not only are we expecting new models from existing marques, you can look forward to seeing a couple of new brands making their entrance to the Nepalese auto industry. We’re sure you want to see the new launches up close and in person, check out which stall you want to hit first.

The iconic American brand Jeep has made its grand entry in the Nepali automotive industry with the Compass. The Jeep Compass is a compact crossover SUV introduced back in 2007, and is now in its second generation. And it is finally here in Nepal. Although it is small compared to other Jeep SUVs, it still contains all of that legendary Jeep DNA which is evident from its signature seven-slot grille. The Compass comes with an option of two oil burners under the hood. There’s a 1.4-Litre Petrol engine that generates 160bhp of power and 250Nm of torque. And there is the bigger 2.0-litre diesel engine that generates 170bhp of power and 350Nm of torque. The Jeep Compass comes into a pretty competitive playground here, but for us, that just means that the compact SUV has just gotten more exciting. It’s good to have the Jeep in Nepal.

Also making a surprise guest appearance is the Jeep Wrangler, which is quite frankly the most iconic Jeep ever made. The first Wrangler came out in 1986 and the model is currently in its 4th generation. For the off-road fanatics, this is definitely reason enough to visit the NADA Auto Show. It doesn’t look like the Wrangler is going to stick around for too long though, so this might be the only chance you get to see it in person. Let’s just hope it does officially come to Nepal sometime in the future.

They had us waiting for a long long time, but TVS has finally brought the RR310 to Nepal. The Akula concept that teased the motorheads has finally made its arrival in Nepal. Sharing the same engine from the BMW G310R, the TVS Apache RR310 is a very welcome addition to the entry-level sports bike segment. Its designs have literally been inspired by SHARKS! (Hint: The Akula concept which was showcased at Delhi Auto Expo 2016). So it does look good and aggressive, but that’s not all. The 300cc liquid cooled engine makes 34 BHP and 27 Nm of torque.

And while we are on the subject of Torque, TVS is also bringing in the Ntorq, a very sharp sporty scooter that makes a strong contender for the Aprilia SR 125. It integrates cutting-edge smart technologies and aircraft-inspired design into one rev happy package.

As big and real as it gets, this was the arrival every biker in the country was waiting for. Harley Davidson, the iconic American brand, is making it’s long overdue official debut. The company will blow things wide open in the higher capacity segment with their lineup. Expect the company to steal some thunder at this year’s show.

Although Toyota was late to the small SUV segment, the Rush had two of its stock completely sold out before it even hit the streets. Toyota says the Rush is speculated to be ‘a perfect fit’ for the roads and terrain of Nepal.  That alone makes the Rush a must watch at NADA. The Rush is powered by a 1.5-liter petrol motor putting out 100 BHP along with 134 Nm of max torque. The motor is coupled with a 5-speed manual and 4-speed automatic gearbox, both sending the power to the rear wheels of the car. Toyota Rush also includes Anti-Lock Braking System with electronic brake force distribution, hill hold assist, reverse camera parking system, and keyless entry with push-button start-stop system and six airbags. 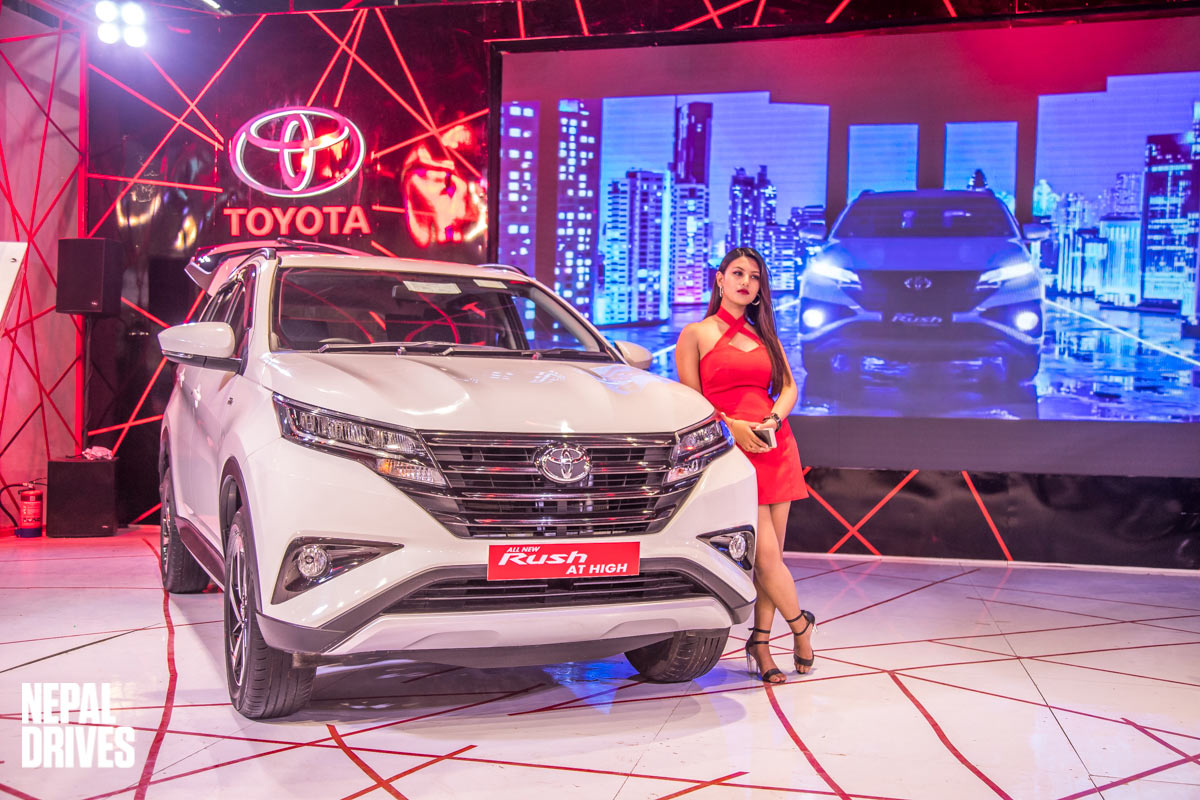 Electric seems to be the theme of this party as Hyundai has also joined other major players and brought in their own electric car to showcase. The Hyundai Ioniq looks elegant yet very low maintenance. Ioniq takes things to a new level with thoughtful amenities, advanced safety features, and ingenious design. The Ioniq in the show floors is the fully electric version rather than a plug-in hybrid. The EV gets a 118-hp electric motor and an estimated 200 km range;  a DC fast charger can recharge its battery to 80 per cent in 23 minutes.

The VW Polo has been here for a long time, and it has established a name for itself as a day to day family car that is fast, elegant and luxurious. As the manufacturers are getting rid of older, inefficient engines and replacing them with cleaner, smaller and more efficient units. The German manufacturer has done just that. they’ve taken the Polo and given it a new heart, a 1-liter heart that makes 76BHp and 95Nm of torque. this heart transplant has taken a toll on the performance figures. However, The polo 1.0 has a claimed mileage of 18 kmpl. How will this engine swap affect VW Polo sales in Nepal is yet to be seen. 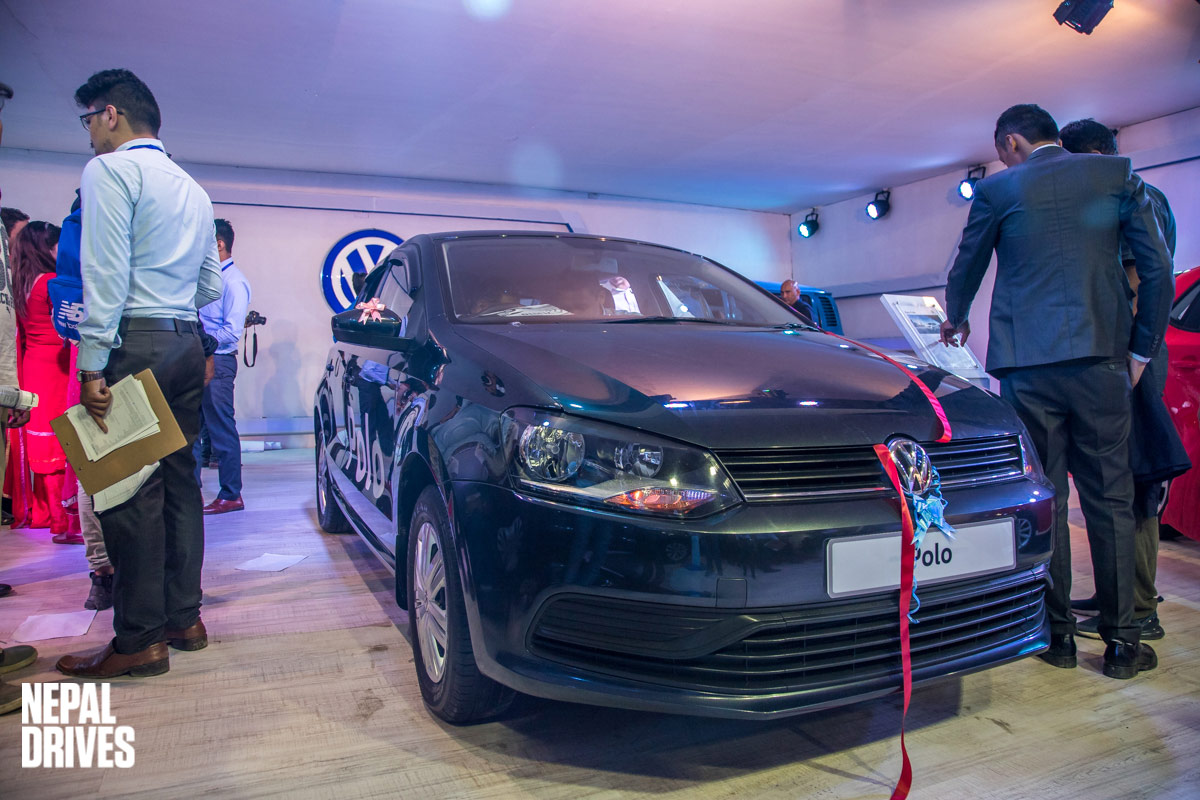 When it comes to small sports bikes Yamaha pretty much set the bar with the R15 series. One of the most popular motorcycles to hit the market, it is great to see the 3rd generation finally coming to Nepal. The first R15 was loved by people who wanted an everyday sports bike that was fast, efficient and easy to maintain, and not to mention look really good. And this V3 looks better than ever.  The power comes from the new 155 cc, liquid-cooled engine that produces 19 BHP and 15 Nm of peak torque paired to a 6-speed gearbox. According to reports, the new R15 is a feisty little crotch rocket. The company is also showcasing the Yamaha XTZ125 dirt bike and Ray ZR Street Rally at the expo.

A new entry,  the Hero Xtreme 200R is very similar to its younger sibling, the Xtreme Sports. But it looks sharper and sportier. It gets an all-new, 199.6cc, air-cooled, single-cylinder engine. It makes 18.4 BHp and 17.1Nm and is mated to a 5-speed gearbox. Also, there’s a single channel ABS, a first for Hero. Hero says the engine is designed to deliver more low-end torque and claims a 0-60kmph time in 4.6 seconds and 114kph top speed. 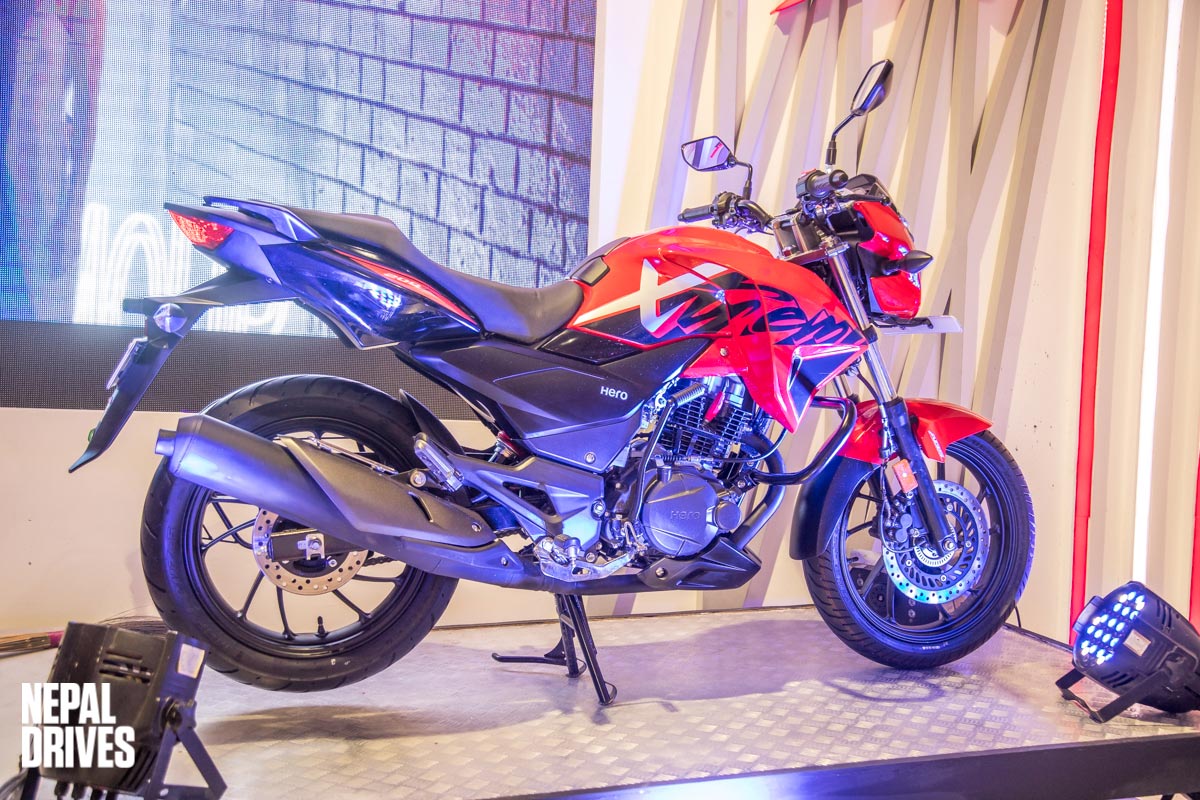 (Update: The Thunderbird X will be showcased later) 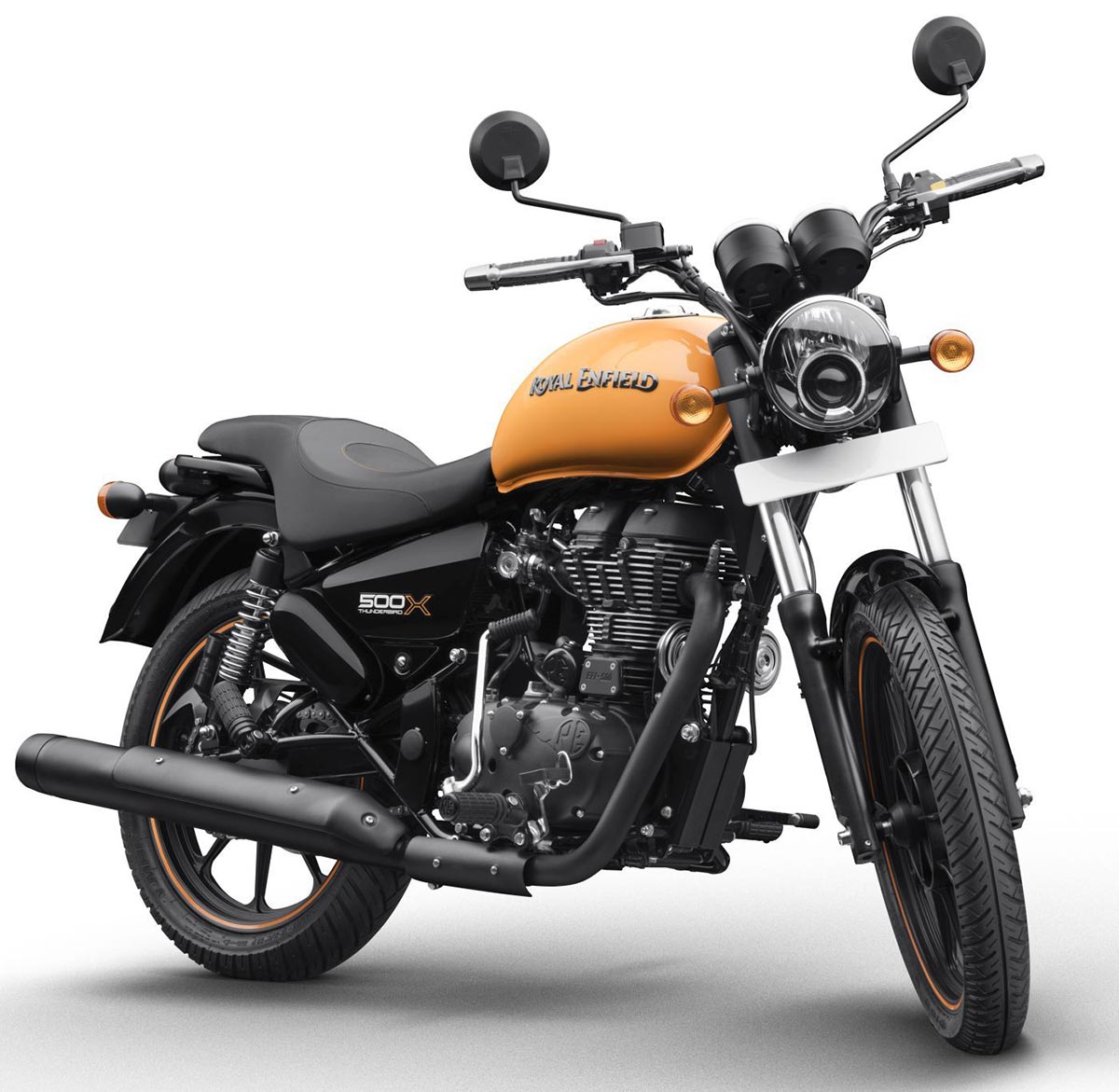 The bike offers a host of features that are a first-of-its-kind on a Royal Enfield like – new matte black alloy wheels instead of wire-spoked wheels, tubeless tires, and a matte black silencer. The motorcycle comes in a 350cc and a 500cc option with some interesting colours to choose from. We at Nepal Drives can’t wait to get our hands on this machine.

Jumping on the electric car bandwagon in this year’s show is Renault. They have on display the Renault Zoe, a five-door supermini electric car which was ranked amongst the world’s top 10 best selling plug-in electric cars for many years. The Zoe features an 80kwh powerplant which combines extra power with even greater driving enjoyment. It boasts of a range of 400kms and a 0-80% charging time of just 65 mins via a quick charger. Renault claims a real-world driving range of 300kms and a full charge time of 8-9 hours using a standard 7kw charger.

We loved the Tigor mainly for its design, a sedan with a short and lifted rear, the smoked headlamps and the sweet pair of alloys made for one hell of a sporty package. Now the Tigor gets rid of its oil burner and gets a battery instead. Tata also jumps into the electric power bandwagon with the Tigor EV which has a rather small 40 kW battery and does 100km on a full charge. Also on display were the Nexon AMT and other models.

E stands for electric, and the E-Verito sedan will be another great addition to an already successful E20 hatchback. Like the E20, the E-Verito also runs on electricity alone. It is powered by a three-phase 72V electric motor that produces 41 BHp of power and 91 Nm of torque. The model has a claimed range of 110km and it will be an addition to the battery powered vehicle industry of Nepal. 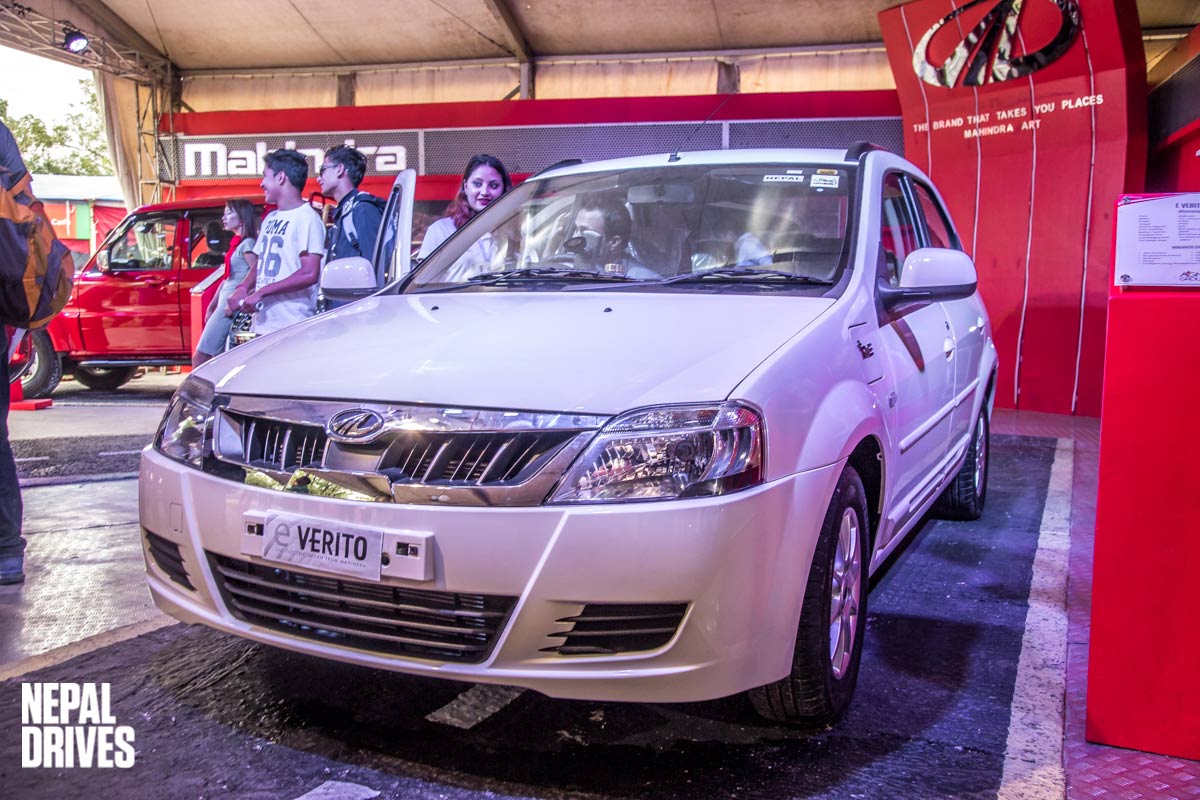 Based on the TUV 300, the Mahindra Stinger SUV is built on a ladder frame chassis. This is an interesting concept that has an open top. The Stinger will be a concept only for the time being. This will be a sub 4 meter SUV and will be compact in dimensions. The front resembles TUV 300 and looks striking with a crowned bonnet and sleek headlamps. 17-inch alloy wheels don this SUV and it has a sharply raked windscreen. It is a 5 seater SUV. The rear looks stylish and sporty and gets a manual soft top. The 1.5-liter mhawk turbocharged engine will do duty in the Mahindra Stinger. This engine will be updated and will get improvements. It will belt out a maximum power of 101 bhp and a peak torque of 240 Nm.

The Honda XBlade is a new entrant into the 160 cc segment. The X-Blade flaunts an aggressive design language courtesy of a sculpted fuel tank, taller fly screen, an underbelly cowl, dual outlet muffler and chunky grab rails. A naked sport body featuring a razor sharp design and a Robo-like face makes the X Blade look fearless and ready to take on the segment Giants. The new Honda X-Blade shares its underpinning with the Honda CB Hornet 160R. It churns out a maximum of 13.93 bhp and 13.9 Nm of torque. The XBlade will go head to head against Bajaj Pulsar NS 160. 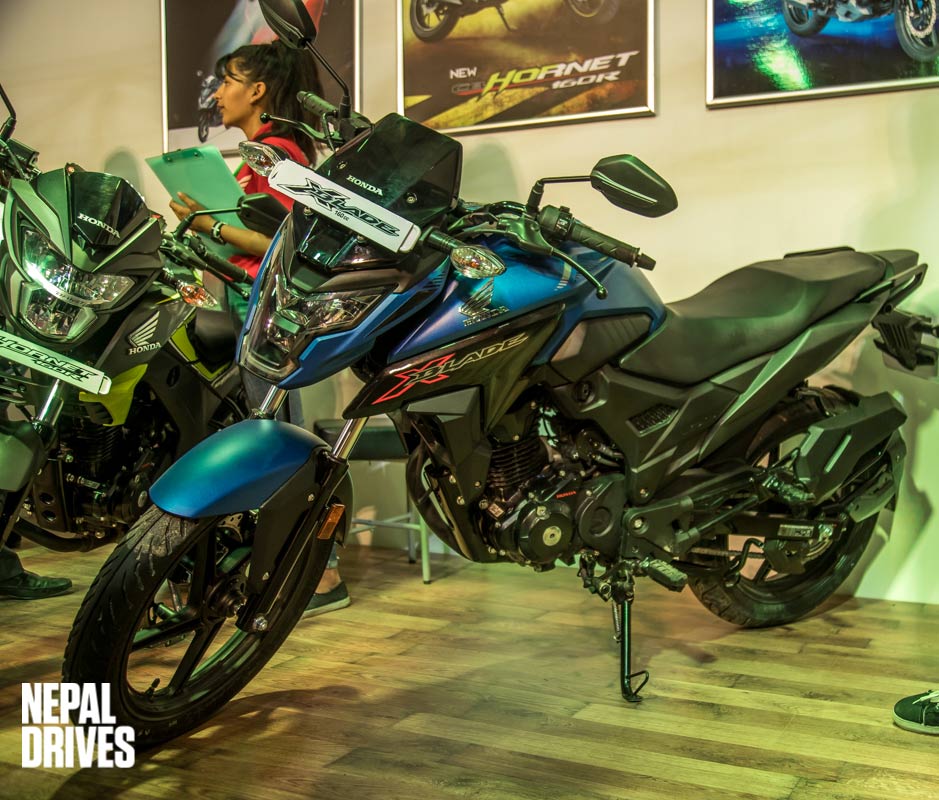 Graceful, nimble, and most of all a blast to ride, the CB1000R is full of innovative engineering to make riding fun. Plus, its styling offers a modern take on the timeless roadster design. Its CBR-derived engine makes it light and narrow. And not does the new chassis looks good, it is the basis of its sure-footed handling.

Another exciting product in the Honda stable is the quirky NM4 Vultus.  Along with its feet forward design, the scooterstyle hybrid design language of the Vultus is sure to get plenty of attention. Powering the Vultus is a 670cc motor which is mated to a 6-speed dial clutch transmission.

UM Motors showcased the Xtreet Z 200 and Adventure TT at this year’s show. 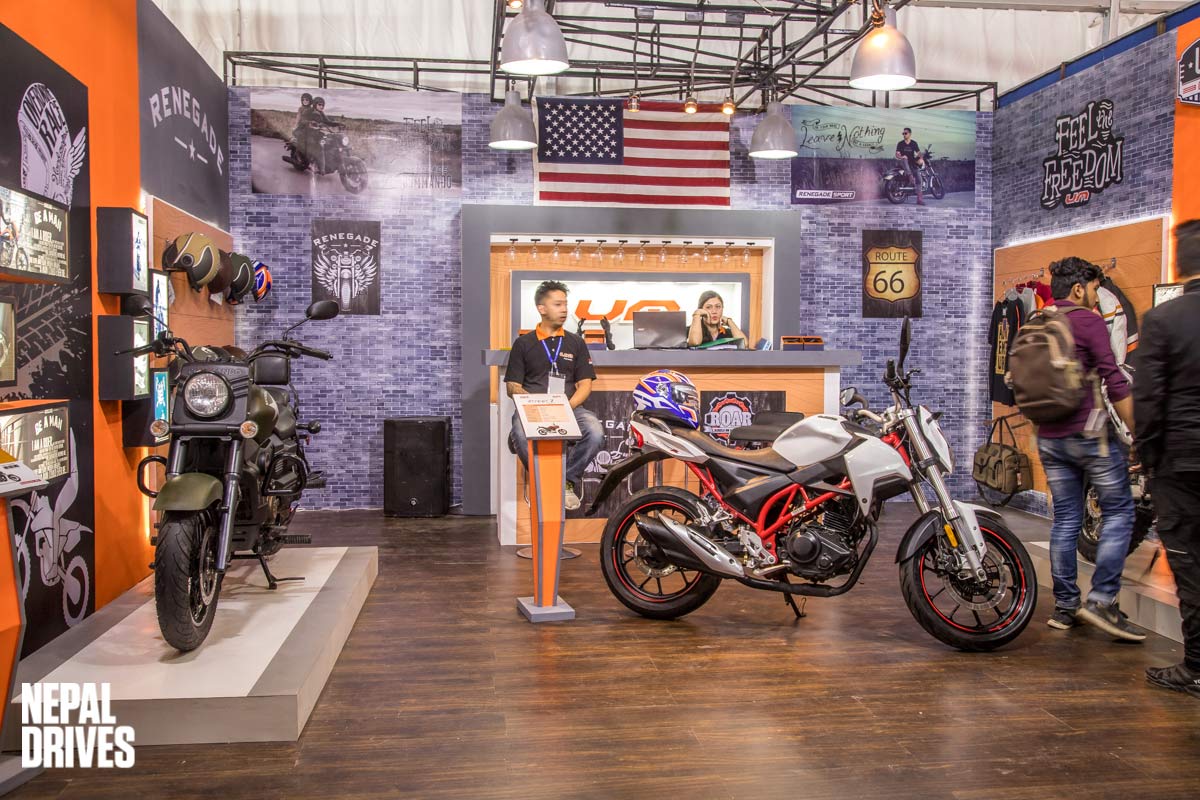