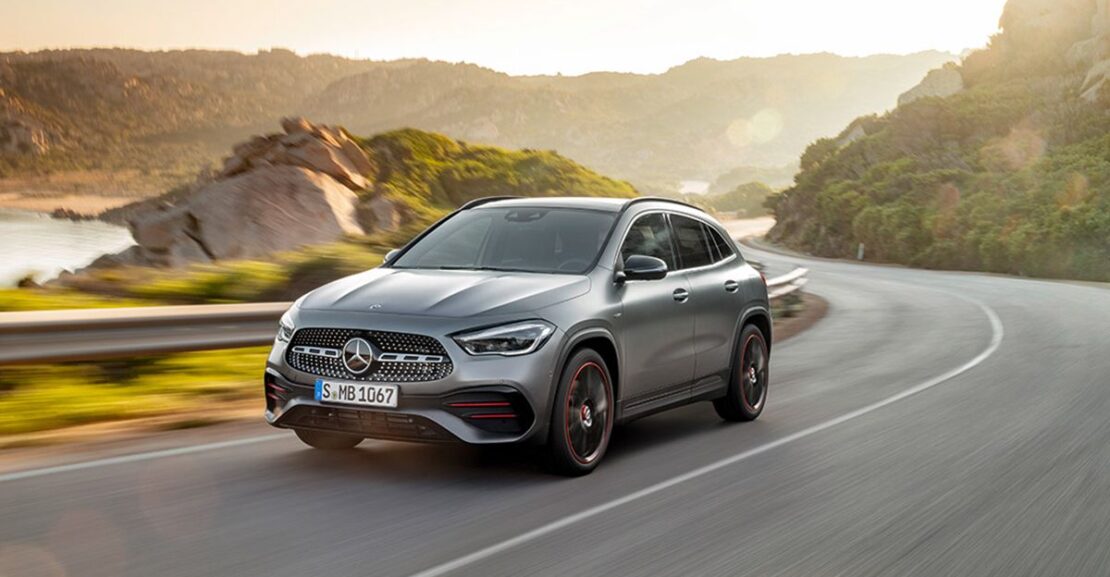 The new GLA, the eighth model to join the line-up, rounds off the current compact car generation from Mercedes-Benz. At the same time, it represents the entry-level into the brand’s successful family of SUV models. The character has been significantly reinforced here compared with the previous model: the height of the new GLA, at 1611 millimetres (1616 with roof rails), exceeds that of its predecessor by more than ten centimetres. 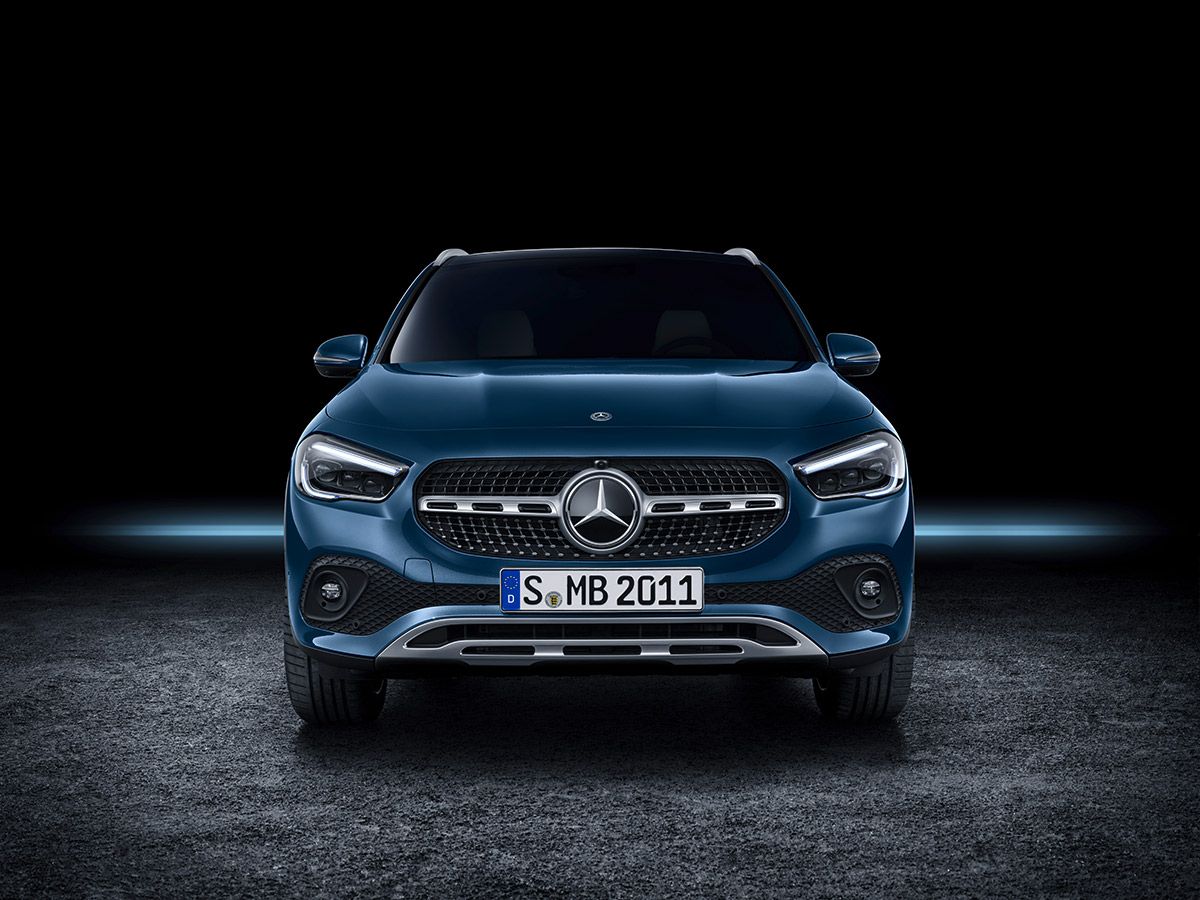 The GLA features powerful overall proportions with short overhangs front and rear. The front section flows over the A-pillar into the visually compact greenhouse. Suggested powerdomes in the bonnet, along with wheels up to 20 inches in size and mounted flush with the outer edge of the body, reinforce the self-assured appearance. The clear contours, with reduced lines and accentuated planes, convey serene sportiness and modernity. Typical of the GLA is the powerful shoulders of the bodywork and the coupé-like lines of the side windows. This contoured side profile gives the car its dynamically elegant flair and offers an interesting play of light and shadows. 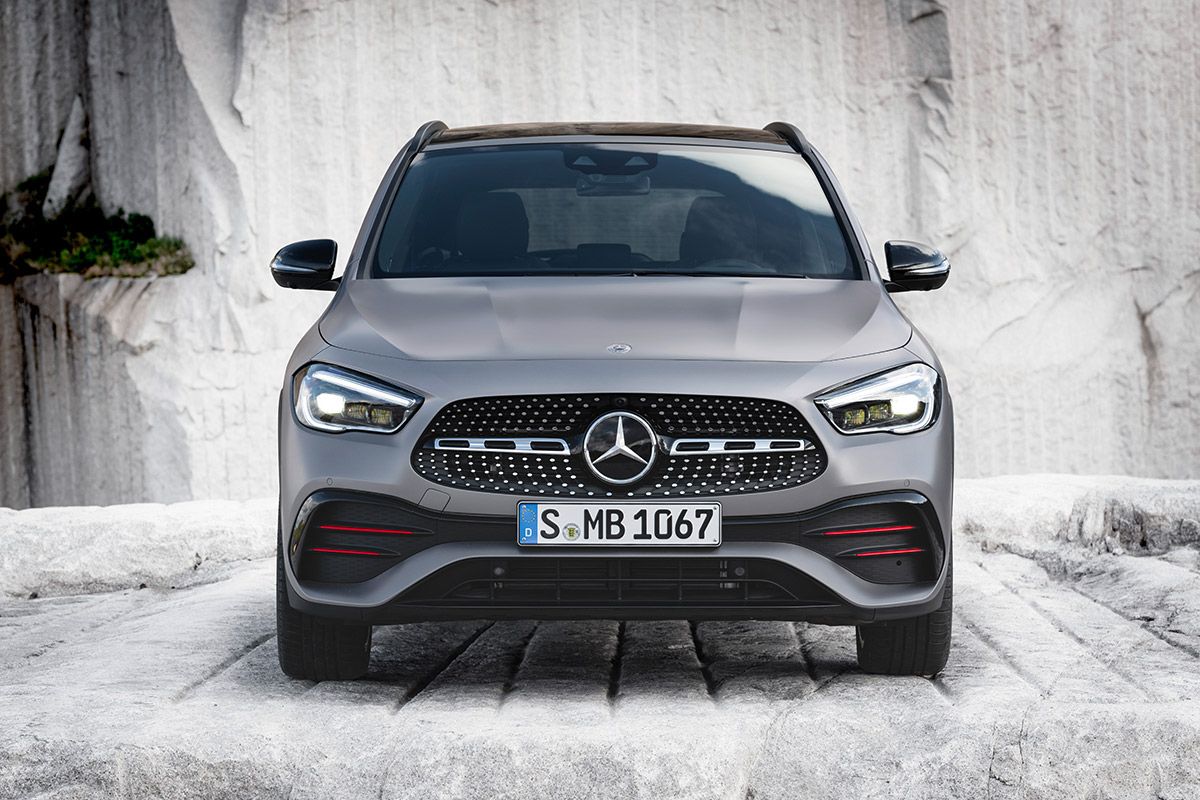 As in the case of the other Mercedes-Benz SUV models, the radiator grille features distinctive openings along with a single louvre and a central star. In hallmark brand style, the inside of the headlamps is finished to a high level of quality, detail and precision. The side and rear views are characterised by the muscular shoulders of the vehicle. The doors reach over the sills, thereby, on the one hand, improving ease of access, while at the same time keeping the door frames (and thus also the occupants’ trousers) free of dirt and improving impact protection in the event of a side collision. All-round protective cladding adds structure to the overall proportions and emphasises the vehicle’s off-road character, as does the simulated underride guard at the front and rear. 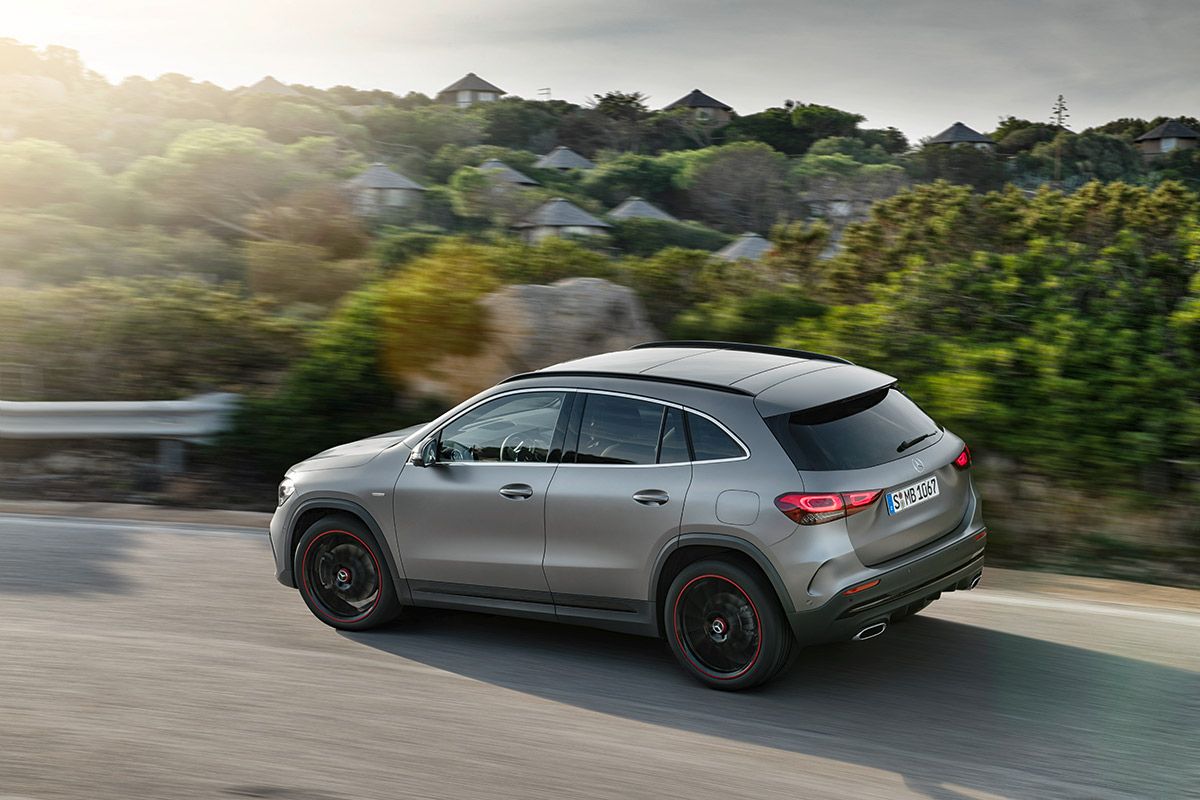 The rear lights are in two parts, with the reflectors positioned separately in the bumper. The makes it possible to open the load compartment wider, thus also making loading easier. It has the added effect of making the rear end appear wider. Further practical details, which may be optional depending on the equipment line, include the integrated roof rails and the chrome-plated load sill protection. Typical off-road design features include the upright front section, short overhangs at the front and rear, and protective cladding all around. 4MATIC models feature the Off-Road Engineering Package as standard. This comprises an additional driving program, a downhill driving assist function and an off-road animation in the media display, along with, in combination with MULTIBEAM LED headlamps, a special light function for off-road driving. 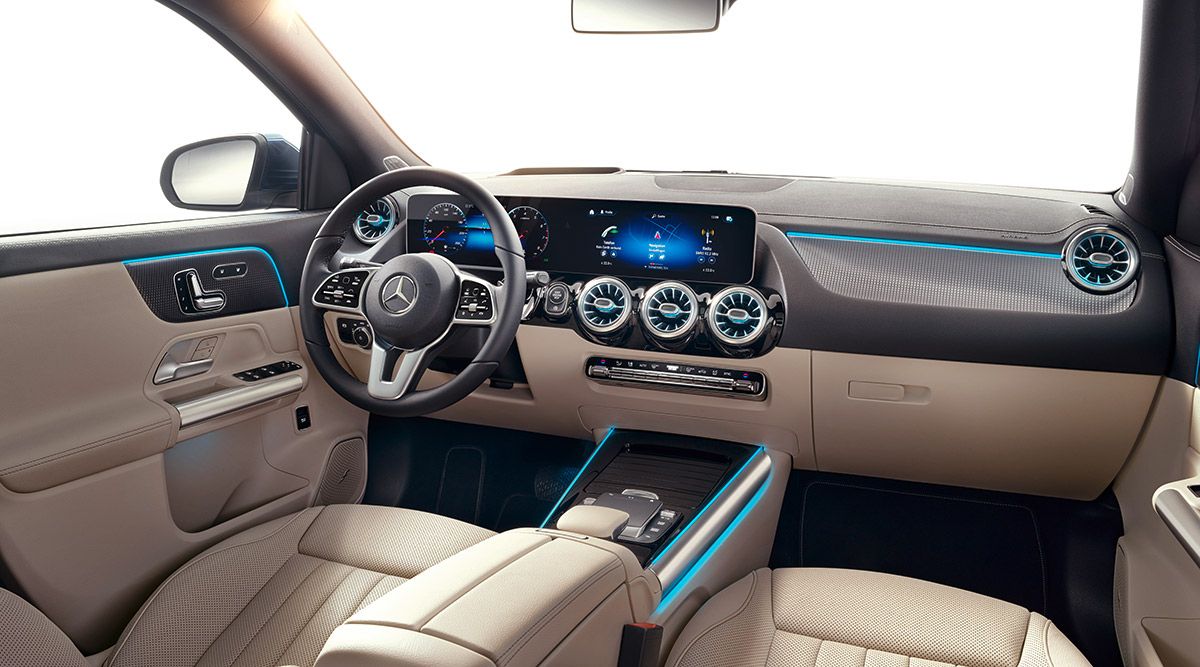 Although shorter than its predecessor on the outside, the new GLA offers a more spacious interior. This is particularly true of the legroom in the rear and the boot space, as the table of dimensions shows. The seating position for both the driver and the front passenger is higher and more upright than in the predecessor model, and thus more typical of an SUV. The driver and front passenger sit 140 mm higher than in the A-Class and 50 mm higher than in the B-Class. All-round visibility has also been improved in comparison with the previous model – mainly due to an optimised cross-section for the roof pillars, which now block out less of the surrounding area. Included as standard is the intuitively operated MBUX infotainment system (Mercedes-Benz User Experience). MBUX can be individually configured with the aid of a range of options. The powerful computer, brilliant screens and graphics, customisable presentation, full-colour head-up display, navigation with augmented reality, learning software, and voice control activated with the prompt ”Hey Mercedes” are the key advantages of the system. 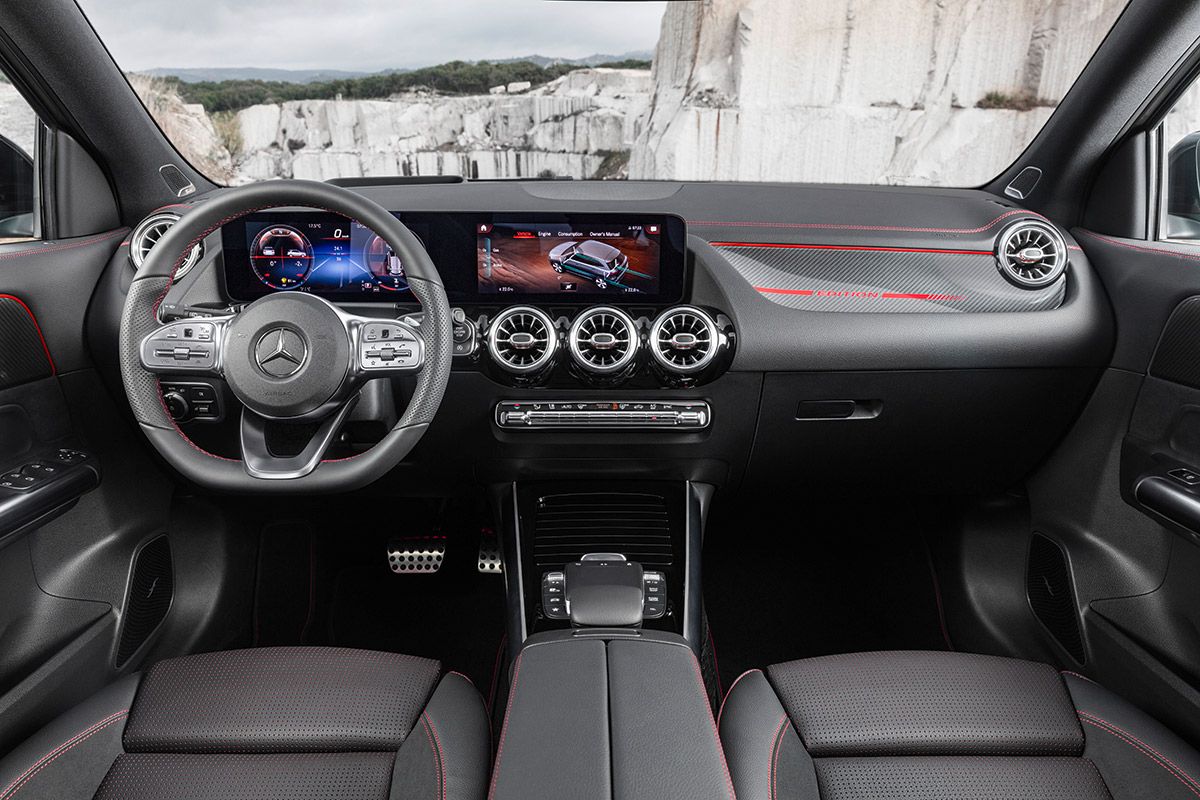 The correspondingly higher and characteristic SUV seating position also comes with more headroom in the first row. Legroom in the rear is likewise much more generous – even though the GLA is now one and a half centimetres shorter. The instrument panel consists of a basic volume, which features optical “cut-outs” in the driver and front passenger area. The cut-out on the driver’s side is dominated by the free-standing display unit, which is available in three variants: with two 7-inch displays (17.78 cm), with one 7- and one 10.25-inch display (26 cm) and, in the Widescreen version, with two 10.25-inch displays. On the passenger side, the cut-out area is finished with a trim element. The round ventilation outlets, five of them in all, feature a high-quality turbine look with meticulously designed air guidance vanes. The door centre panel flows seamlessly over into the armrest. The grab and assist handle has a tubular profile and runs horizontally like a railing. 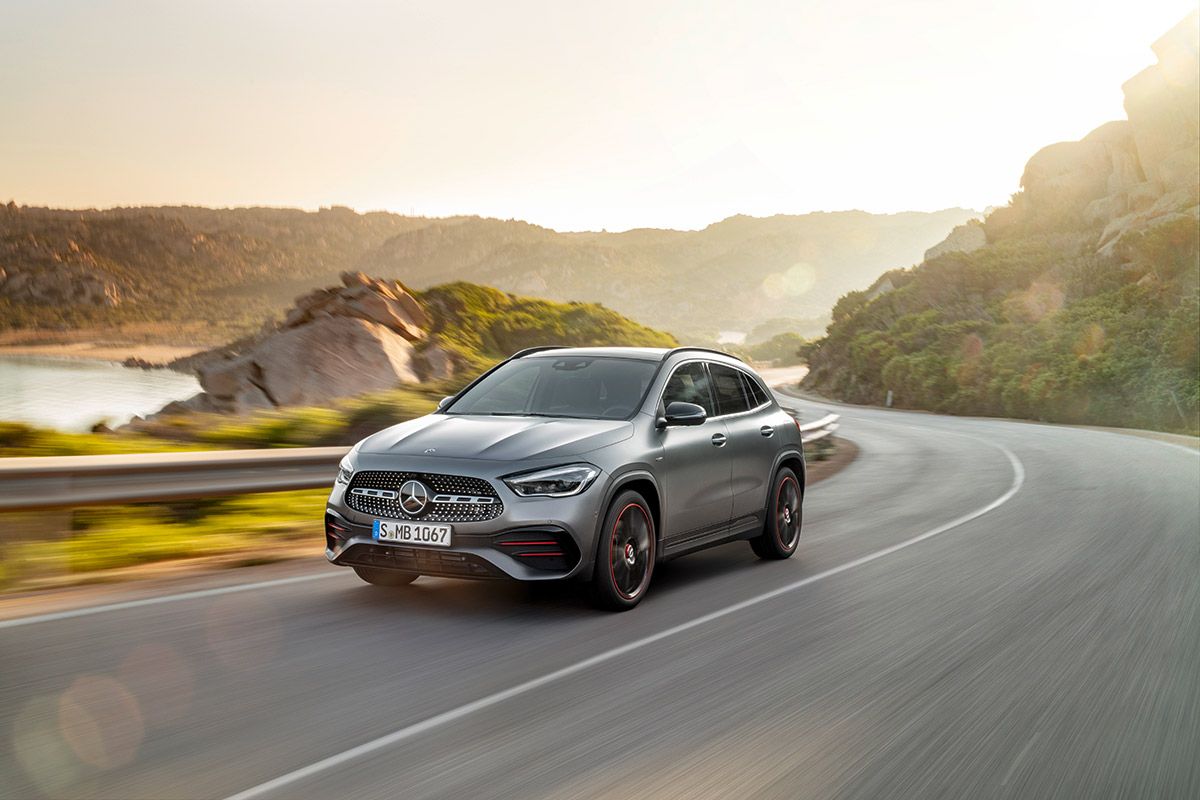 The new GLA places its trust in the four-cylinder petrol and diesel engines which were completely modernised for the new edition of the compact model series. In comparison to the previous generation, they are characterised by significantly increased specific outputs and by improved efficiency and emissions. A locally emission-free model with third-generation plug-in hybrid drive system is already being prepared. Top of the line is the Mercedes-AMG GLA 35 4MATIC (combined fuel consumption 7,5-7,4 l/100 km, combined CO2 emissions 171-170 g/km) The 2.0-litre four-cylinder turbo engine has an immediate response to accelerator pedal commands, high tractive power (400 Nm max. torque from 3000 rpm), a supremely lively response and an emotive engine note. The crankcase made of high-strength, lightweight die-cast aluminium reduces the vehicle weight where it matters most for driving dynamics. A twin-scroll exhaust gas turbocharger is used for turbocharging. It combines optimum responsiveness at low engine speeds with a strong power increase at higher speeds. 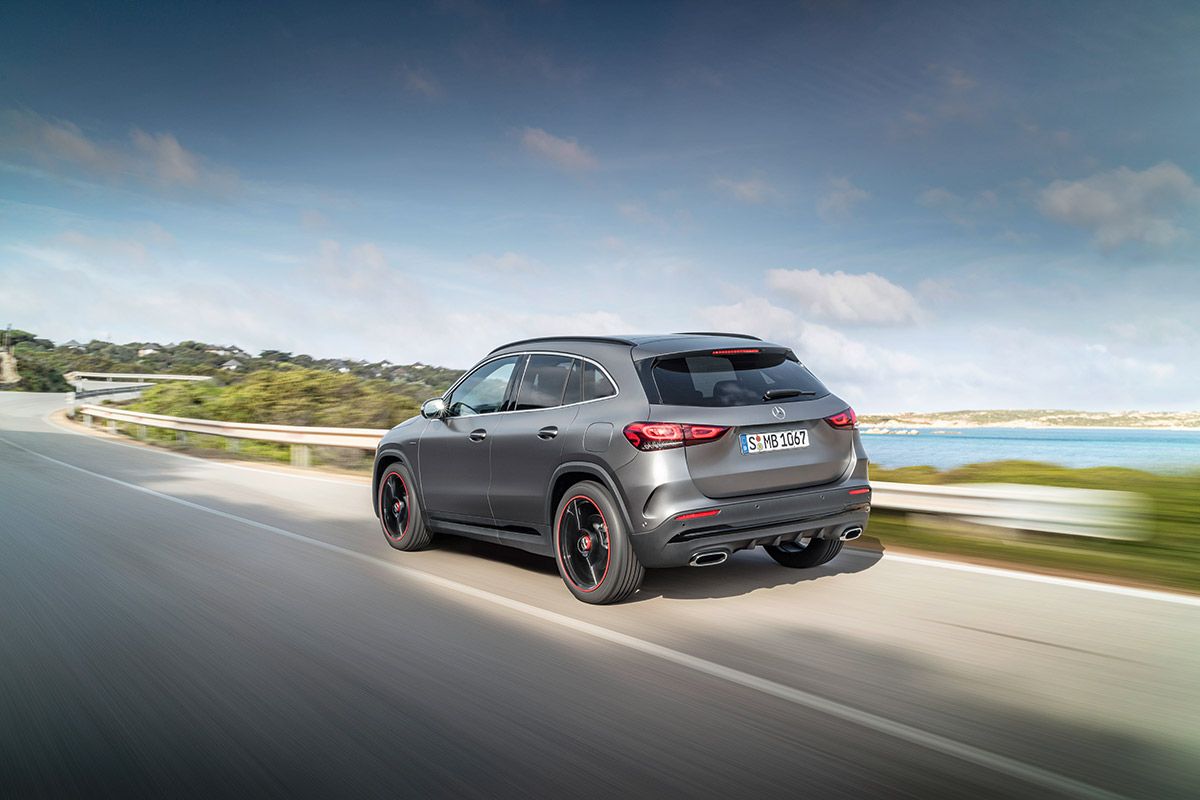 With powerful and efficient four-cylinder engines, the latest driving assistance systems with cooperative driver support, the MBUX infotainment system with intuitive operation as well as the comprehensive ENERGIZING comfort control, the new model has all the strengths of the current generation of compacts from Mercedes-Benz. The GLA can be equipped with the permanent all-wheel-drive system 4MATIC with fully variable torque distribution as an option. 4MATIC components include the power take-off to the rear axle, which is integrated into the automated dual-clutch transmission, and the rear axle differential with an integrated multi-plate clutch. This comprises six plates (12 friction surfaces) with a carbon fibre coating and is capable of transmitting as much as 1000 newton metres of torque. Automatic adjustment is made for wear and tear. 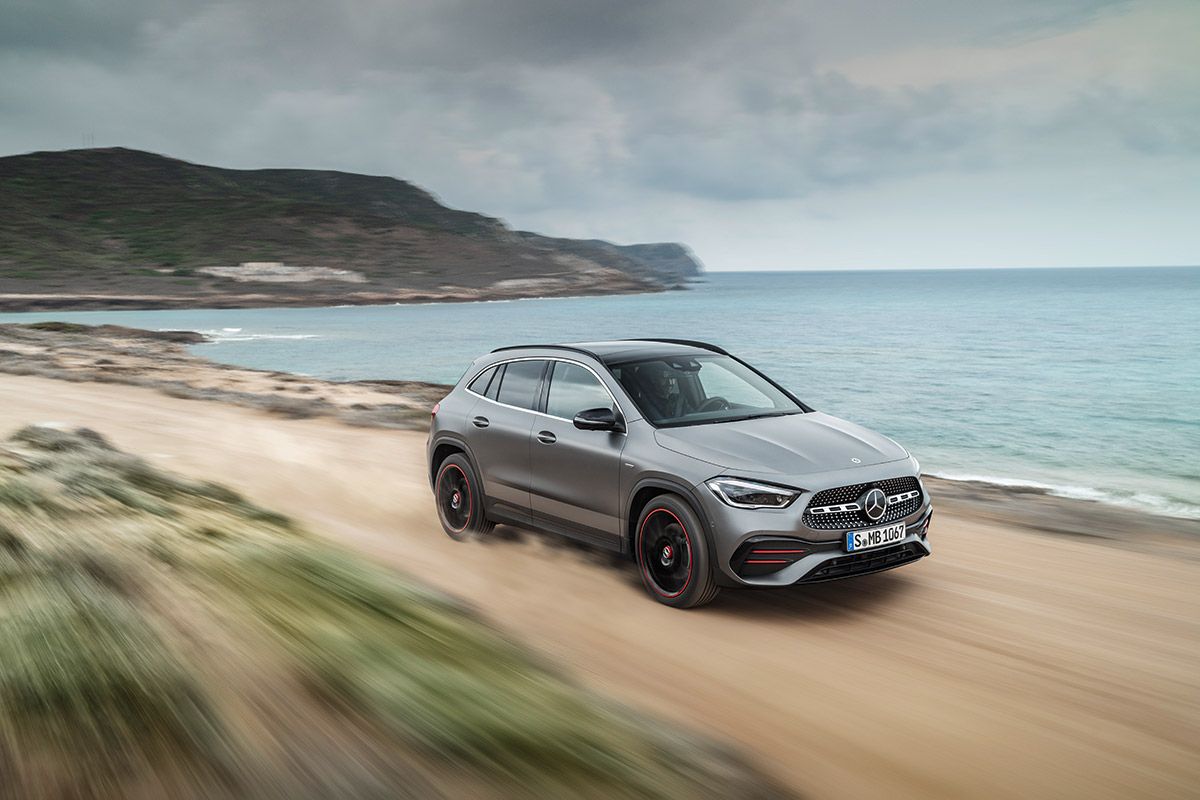 The new GLA makes a further step in terms of safety courtesy of its driving assistance systems with cooperative driver support. The enhanced functions of the Driving Assistance Package include, for example, the turning manoeuvre function, the emergency corridor function, the exit warning function alerting the driver to approaching cyclists or vehicles, and a warning when pedestrians are detected near zebra crossings. The GLA is able to react when the driver doesn’t. Active Brake Assist is charged in many situations with applying autonomous braking to avoid a collision or to reduce its severity. The system can also brake at a speed of up to approx. 60 km/h for stationary vehicles and pedestrians crossing the road ahead. Depending on the situation this even prevents collisions up to a speed of 50 km/h. The new GLA is set to arrive at European dealerships in the spring of 2020. 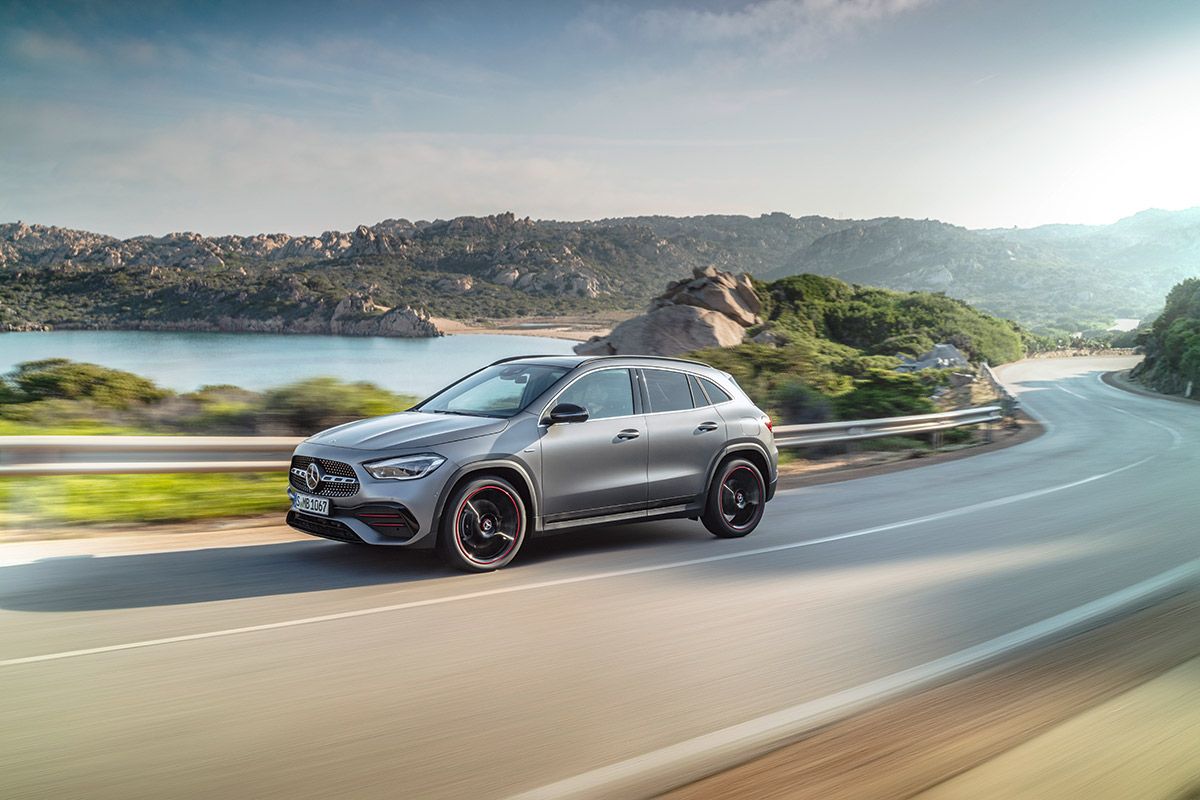 The new GLA will make its debut in Europe in the spring of 2020 and find its way to sales partners in the USA and China in the early summer or summer of 2020. With the GLA the new compact car family from Mercedes-Benz now consists of eight models.