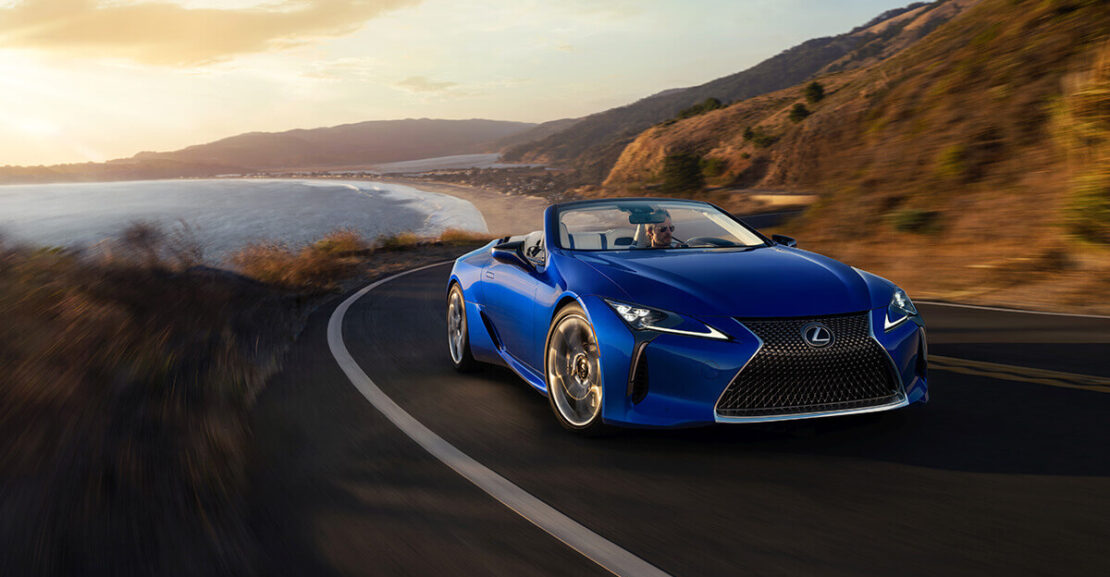 The design mission for the team creating the Lexus LC Convertible was simple: create the world’s most beautiful open-top car. The statement was straightforward, but the task was a considerable challenge, as Lexus was determined that the new model should preserve the essential styling motifs of the LC coupe, the winner of multiple international awards for its striking and advanced design. 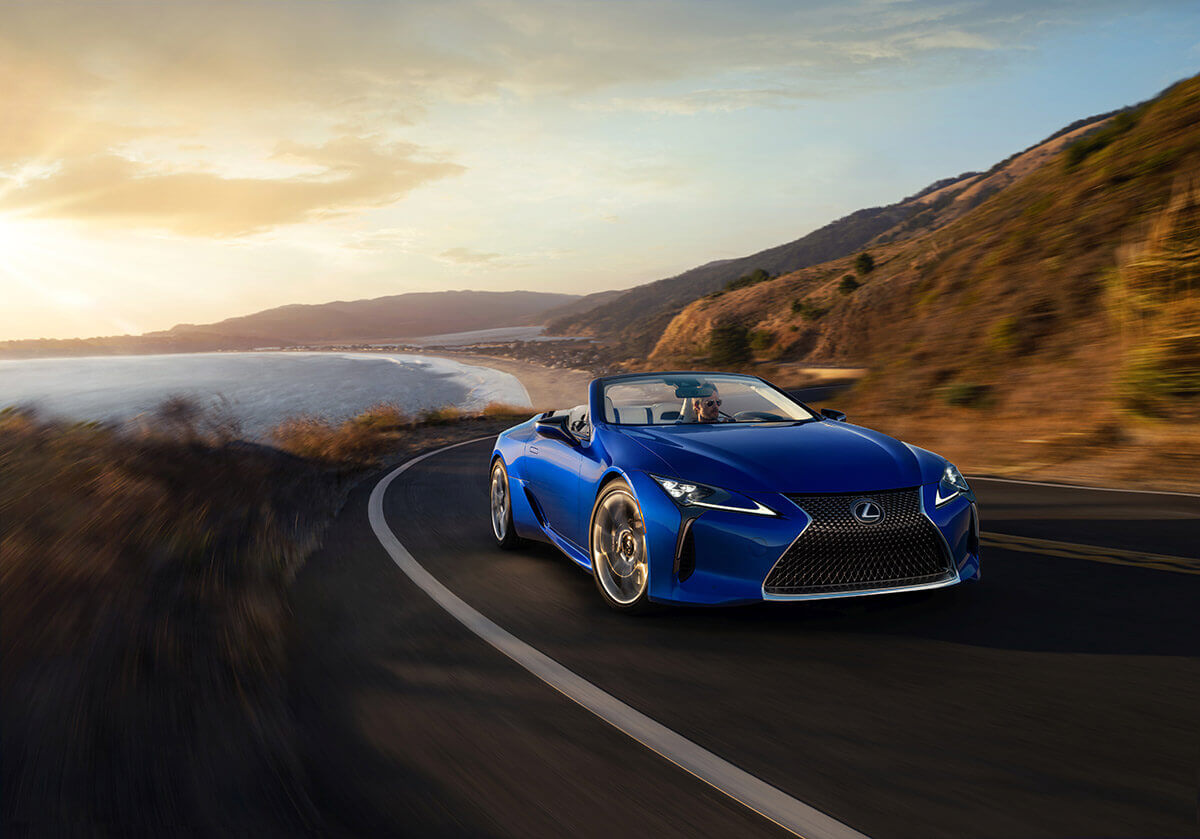 To produce the desired silhouette, the point where the soft top meets the car’s rear quarters has been moved as far towards the rear of the car as possible to create a fastback look when the roof is raised. Particular attention has been paid to the tensioning of the soft top to ensure a smooth surface, and the frame and other elements are perfectly concealed, so the roof has a clean and elegant tapered form. When viewed from the rear, the line of the soft top emphasizes the compact proportions of the cabin, contrasting with the wide-flaring under-body and projecting a dynamic look. 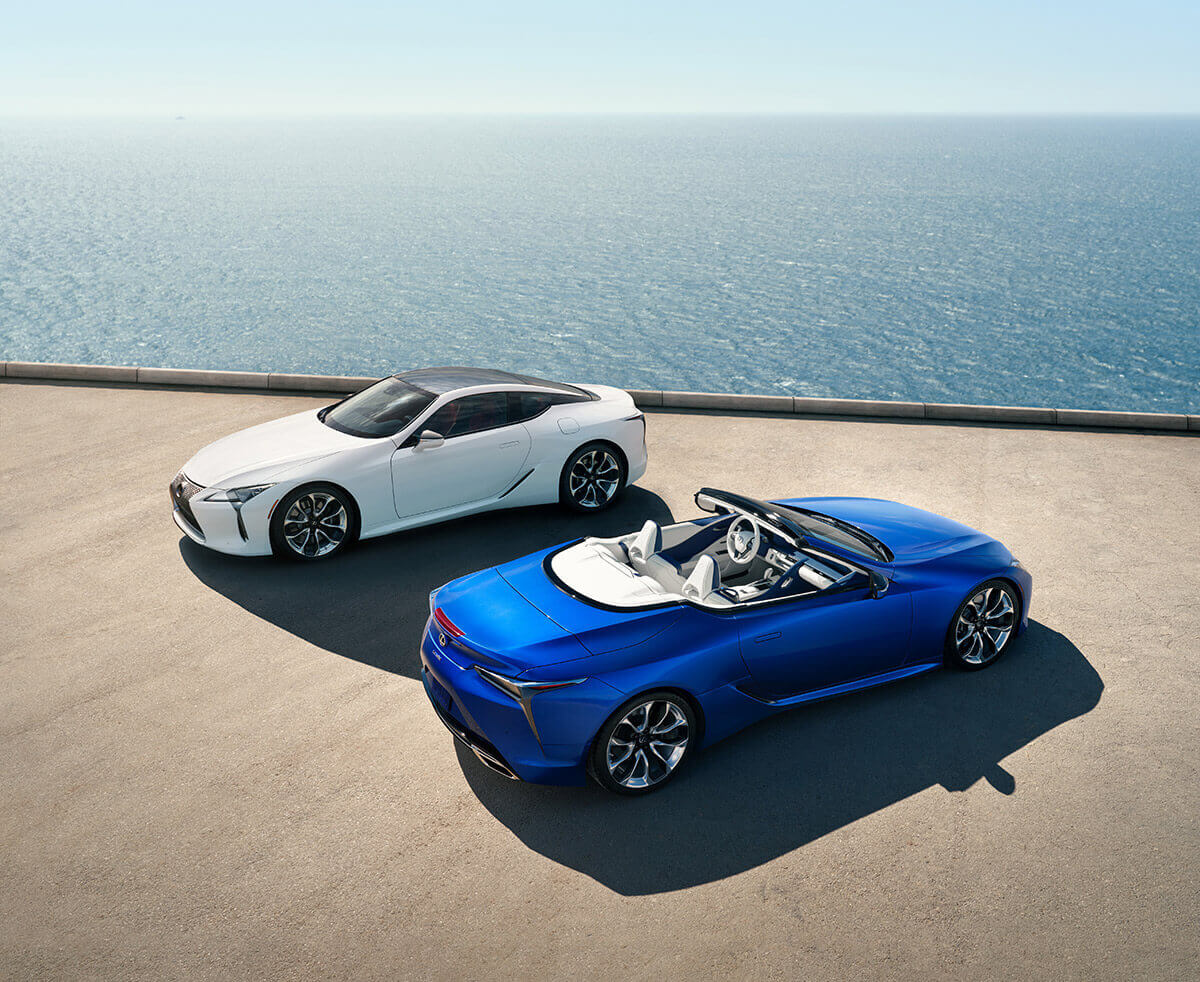 The designers were able to take advantage of the LC’s platform specifications and the soft top’s folding mechanism to set the tonneau cover as low as possible. They also avoided the familiar flat, platform look seen on many other convertibles by adding fairing-shaped accents that echo the curves of the rear headrests. 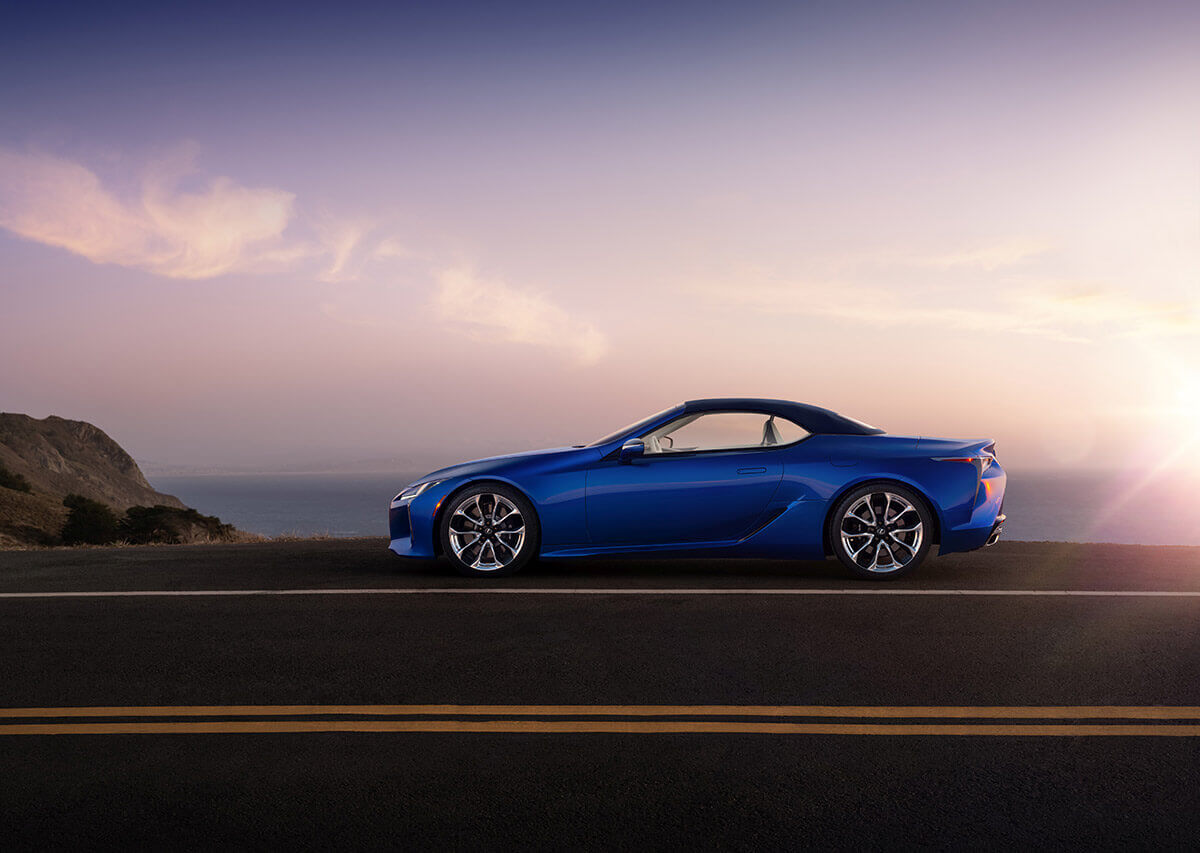 One of the principal challenges was to minimize bulkiness in the bodywork in the shoulder area immediately behind the rear seats. The design team was able to accommodate the folding roof in an extremely compact space by creating an extra fold in the soft top so that it can be stowed in the space between the left and right-hand rear suspension towers. 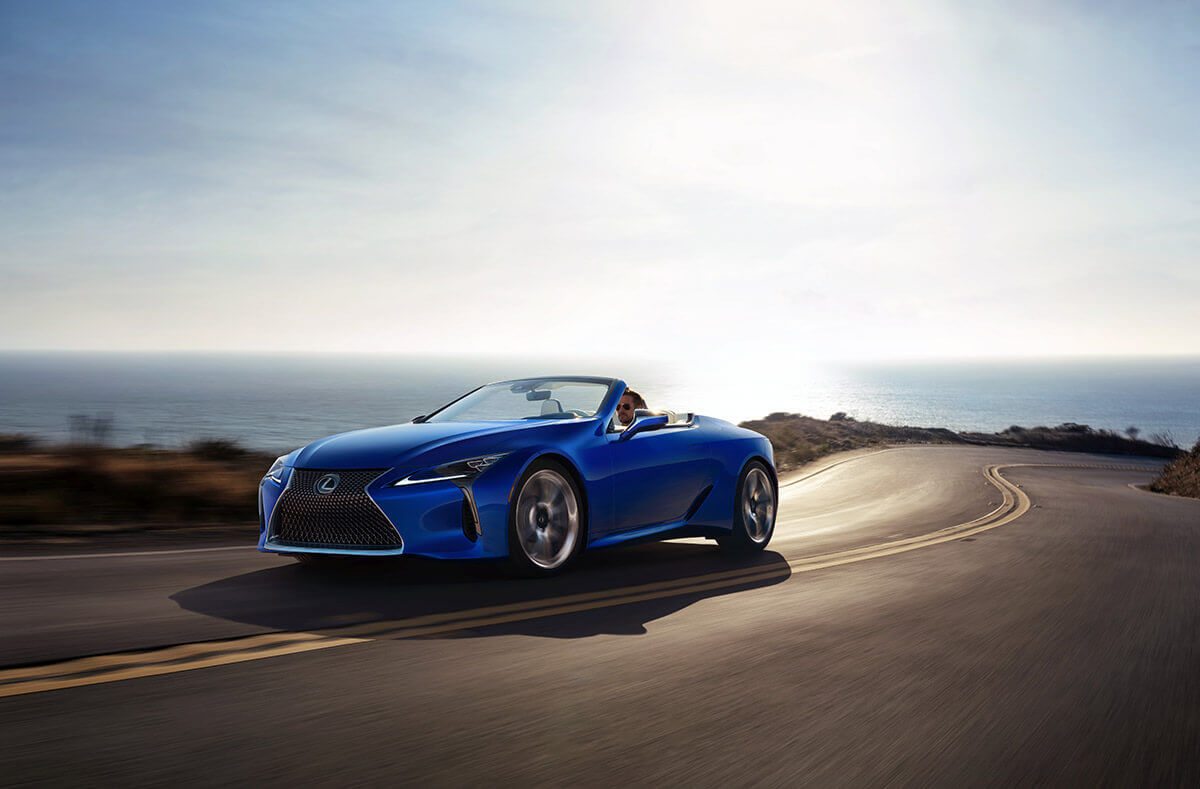 This has also allowed for a sharp and fine character line to be created, running from the front to the rear of the car. To produce this line and achieve a high-quality finish, Lexus has adopted an incremental forming process, in addition to the conventional press used to mould the aluminum tonneau cover. 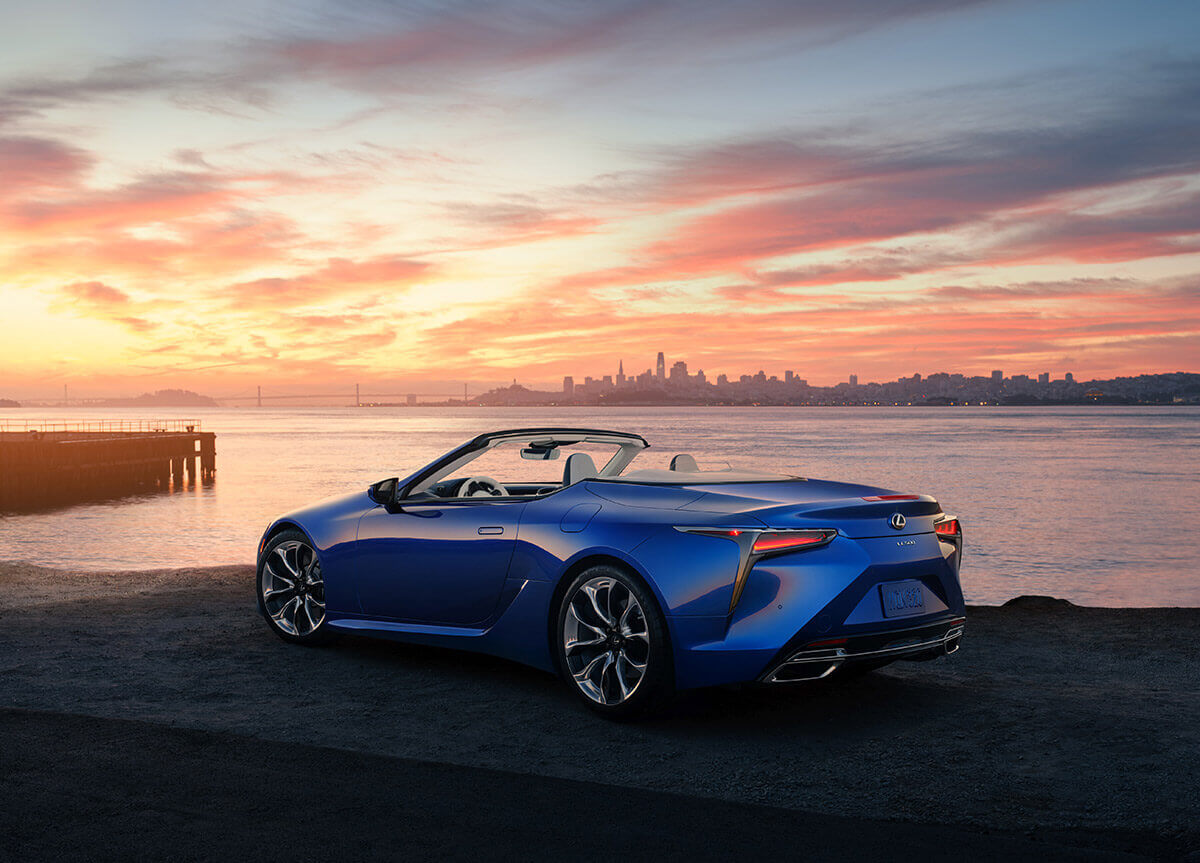 In a convertible, the cabin is more open to view and more closely connected to the car’s exterior design. Lexus has sought to bring a perfect sense of continuity to the exterior and interior of the LC Convertible by using innovative colour co-ordination, enhancing the model’s special character and brave design.

Three soft top colours are available: Sand, Black and Marine, the latter two suitable for use with any of the bodywork paint options. With these choices and further options for interior colours, owners have the freedom to specify a car that captures their personal style. 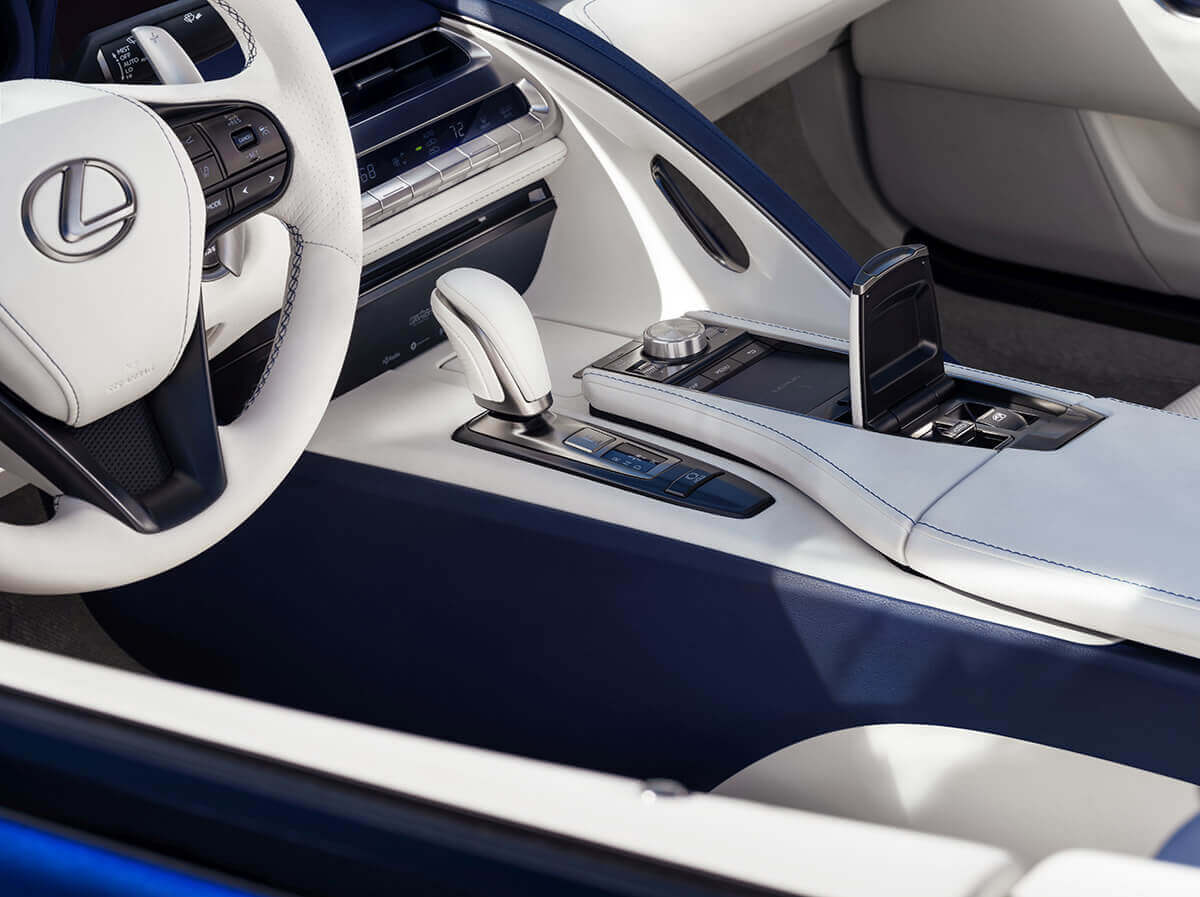 Special attention has also been paid to the detailing on the seat upholstery, with a unique quilting pattern applied to the shoulder section of the front seats, adding both elegance and tactile quality. Perforations with three different hole diameters are organised in the graduated pattern in which they appear to progressively fade away. 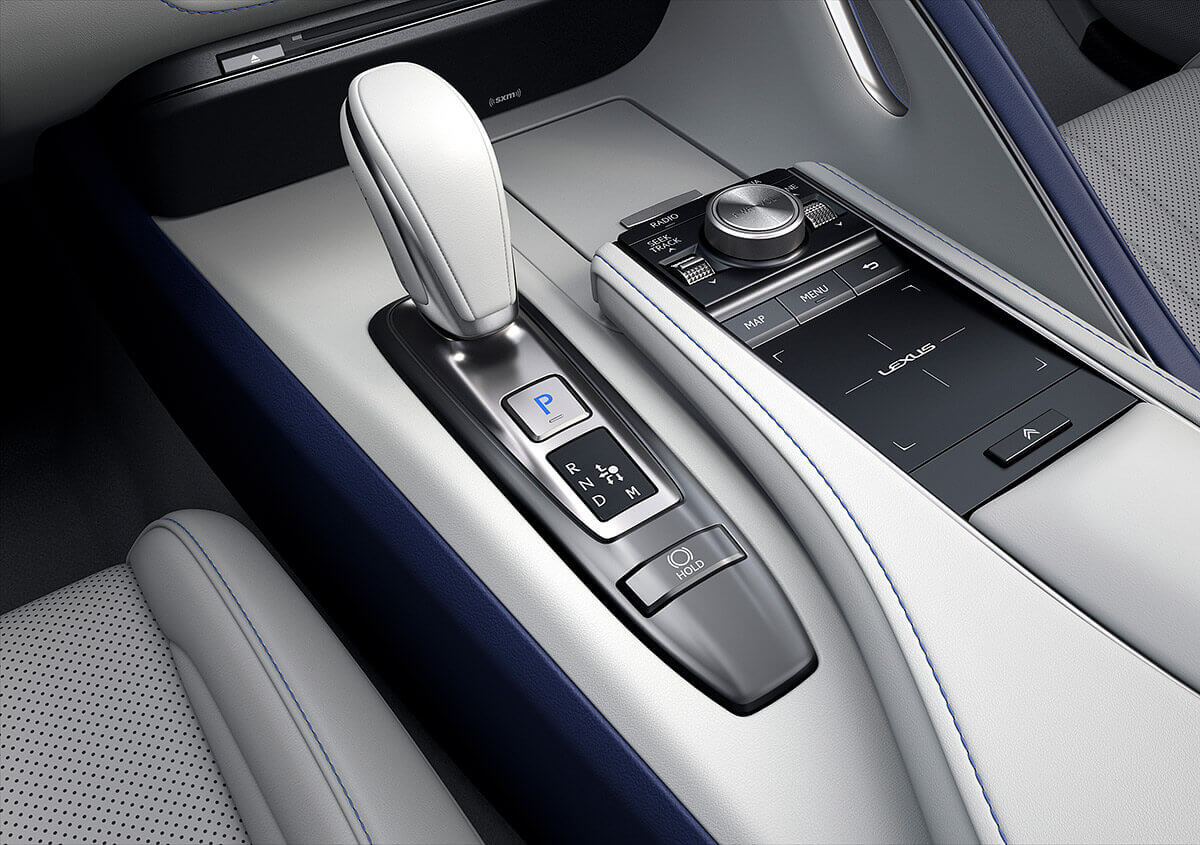 Co-ordinating the interior A-pillar trim with the colour of the roof lining is a rare quality design feature but one that Lexus applies throughout the LC range. The effect is all the more stylish in the LC Convertible, as the pillars are in clear view whenever the roof is lowered. The colour co-ordination catches the eyes and accentuates the luxurious quality of the interior. 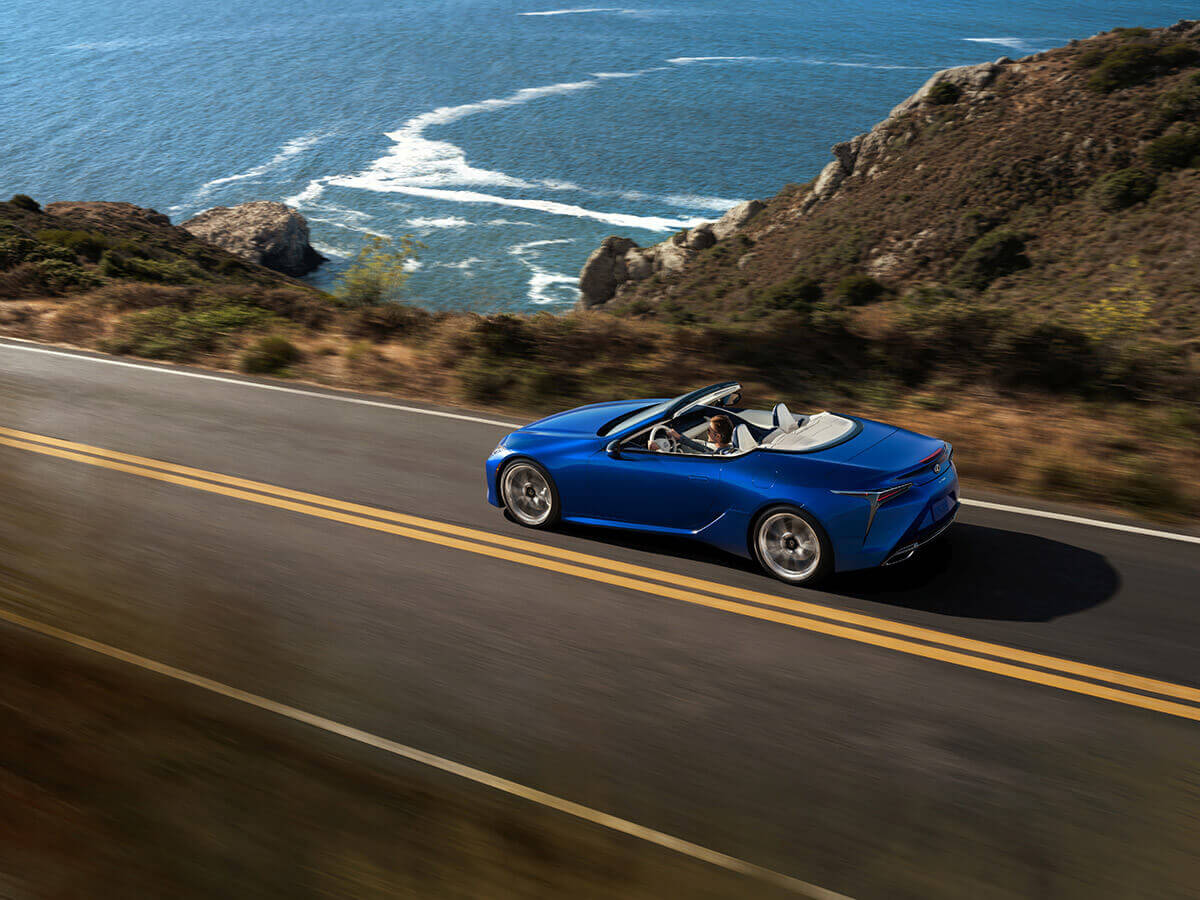 The LC Convertible will be launched with a Special Edition model with a colour scheme that matches Structural Blue bodywork with a white and blue interior and Marine soft top – a combination inspired by the colours found at a luxury marina. White is used extensively in the cabin, including Lexus’ first all-white steering wheel and the carpeting. This contrasts with the door trim which is finished with blue synthetic leather. Rather than a printed pattern, this material has a grain that gives a three-dimensional effect with texture and shading.