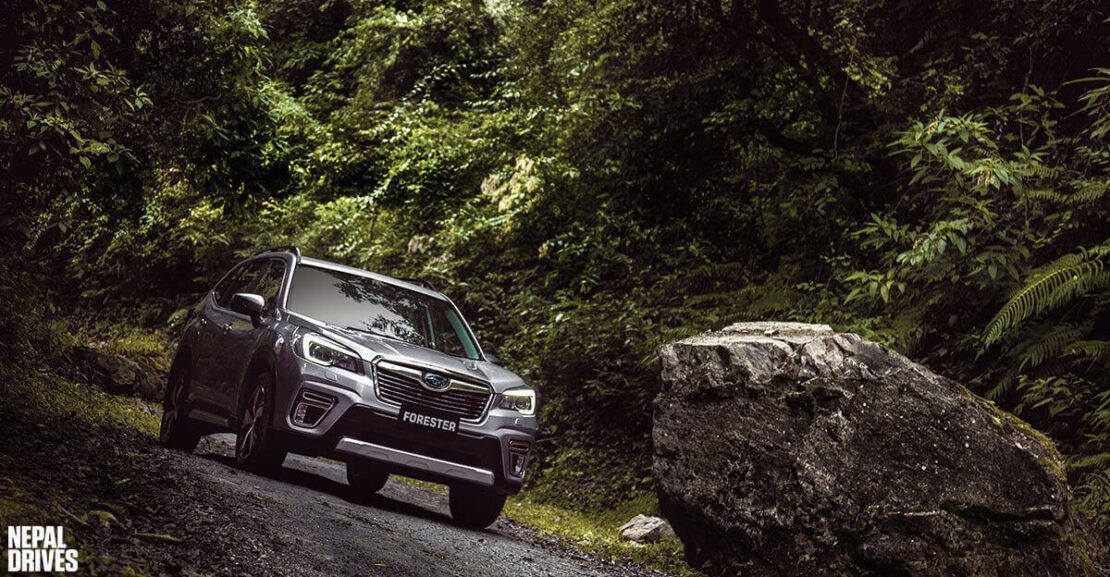 THE SUV MARKET HAS BEEN SLUGGING ALONG FOR THE PAST FEW YEARS,

and by SUV we mean real SUVs and not your typical hatchbacks on stilts that have been garnering all the sales and attention; and why wouldn’t they, they look like an SUV, they feel like an SUV but they are cheaper to run and maintain and will give you more kilometers per liter. Most importantly they cost a fraction of what you would otherwise pay for a proper SUV. But, there are many things these imitation SUVs cannot do; venturing away from the tarmac for instance. 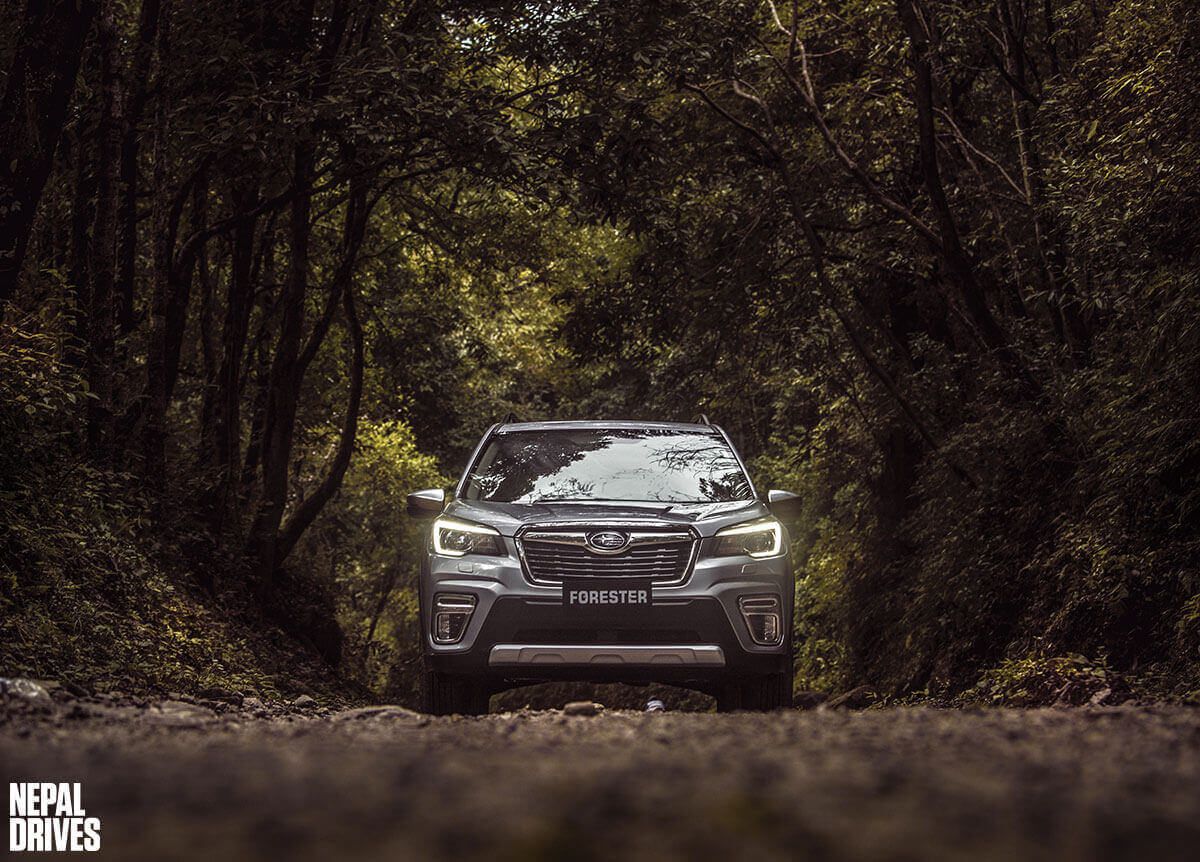 That’s where the 2019 Subaru Forester comes in. Testing its claim of being a proper SUV, we set out towards the proving grounds and drove the Subaru Forester beyond the concrete jungle.

the Subaru Forester looks confident, while the front grill of the Forester will not start any conversations there are other elements that certainly will. You get LED headlamps with sharp DRLs, the headlamps also come with an auto-leveling function that combines low and high beams and will respond according to your steering wheel to ensure maximum visibility around turns at night. You also get stylish LED fog lamps that have a large light coverage area aiding visibility further. Over on the side, the profile is an unmistakable SUV silhouette with a strong character line. The Forester sits 220mm high from the ground and drives on 18-inch alloys with thick spokes that look robust.

Also, in a market of cars with plastic roof rails that serve no purpose like your appendix, the Forester comes with metal roof rails that not only look solid but also can securely carry all your camping gear. Over on the back, you get an integrated roof spoiler and shark fin antenna to spice up the orthodox SUV design. You also get rear LED combination lamps, the C-shaped lamps give a distinct look that represents functionality over form. To top out the exterior on the car, Subaru has given the Forester an actual large chrome exhaust that looks absolutely amazing.

INSIDE THE FORESTER YOU GET

a cabin that is luxurious without looking old fashioned, you get a blacked-out interior with chrome bits dotted all around. The dials of the central infotainment display, the steering wheel controls, the air-con dials and vents, the door handles and window switches, the gear knob and the gear console all are finished in chrome trims which add a lot of premium appeal into the cabin. The front seats are a mix between racing seats and the conventional ones, the contours are amazing and the side bolsters are well padded to hold you in place and provide you with sheer comfort.

The front seats are electrically adjustable and the driver side also comes with a two type memory function. The rear bench is equally padded and comfortable and adequately accommodates 3 adults for a long journey, you also get a sizable boot with a large opening and a powered tailgate that is more than enough to carry more than a week’s worth of family luggage, if you need to carry more, there’s also the aforementioned roof rails that will make you a happy camper.

Coming to the infotainment, the Subaru Forester gives you not one, not two, but three different screens. Let’s start with the smallest, there is a 4.2 inch full-color LCD meter display placed between gauges on the instrument panel. The meter displays useful driving information in a quick glance. Next is a 6.3 inch LCD multifunction display placed on the top of the dash above the infotainment display that provides useful information regarding the air conditioning, fuel range, etc. The largest is an 8-inch touchscreen smacked into the center of the dash flanked by sleek air-con vents, this system comes with Bluetooth connectivity and Apple CarPlay and Android Auto to handle all your cabin entertainment. Also handling the in-car entertainment is a premium audio system featuring Harman Kardon’s latest technology, GreenEdge, the audio system includes 9 speakers and improved acoustics for a richer audio experience.

is a 2.0 liter Boxer engine which Subaru has been committed to for over 50 years, the Boxer engine is basically an engine configuration in which the pistons move toward each other in a horizontal direction. Just the placement of the Boxer engine regardless of its output figures gives the car increased side-to-side stability due to its low center of gravity and flat design, the engine’s flat design is inherently rigid and self-balancing, generating less vibration than other engine types.
Let’s talk numbers. The 2.0-liter petrol engine makes 154 BHP and 196 Nm of peak torque. 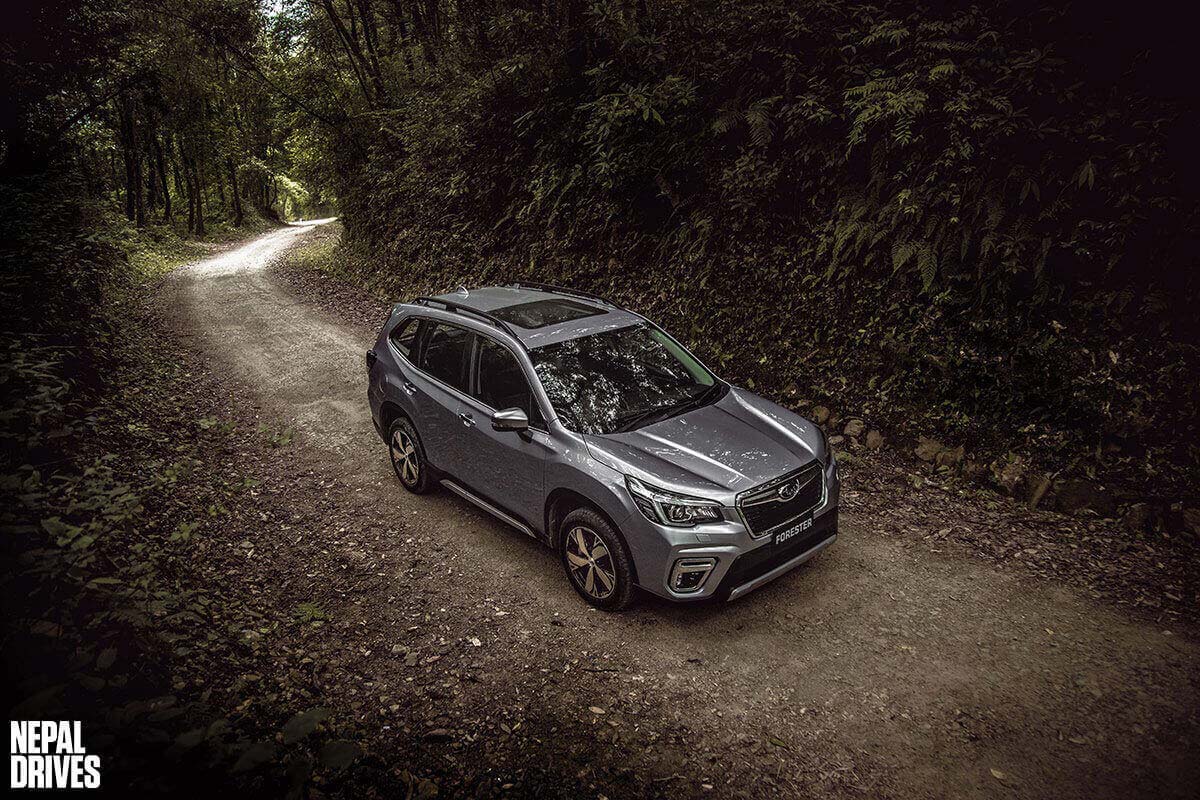 Just like a middle-weight boxer the boxer inside the Forester does take a while to warm up, the Forester does 0-100 km/h in under 11 seconds and will do 193 km/h flat out. Traversing the concrete jungle is made fun by Subaru Intelligent Drive which lets you pick between two modes, Intelligent and Sport. The former provides a balanced, smooth and plant friendly performance while the latter dials up the throttle and steering response for a sporty drive. The steering is responsive and precise, the stiffer chassis of the Forester securely hugs the road around turns eliminating body roll and increasing safer and fun driving sessions. 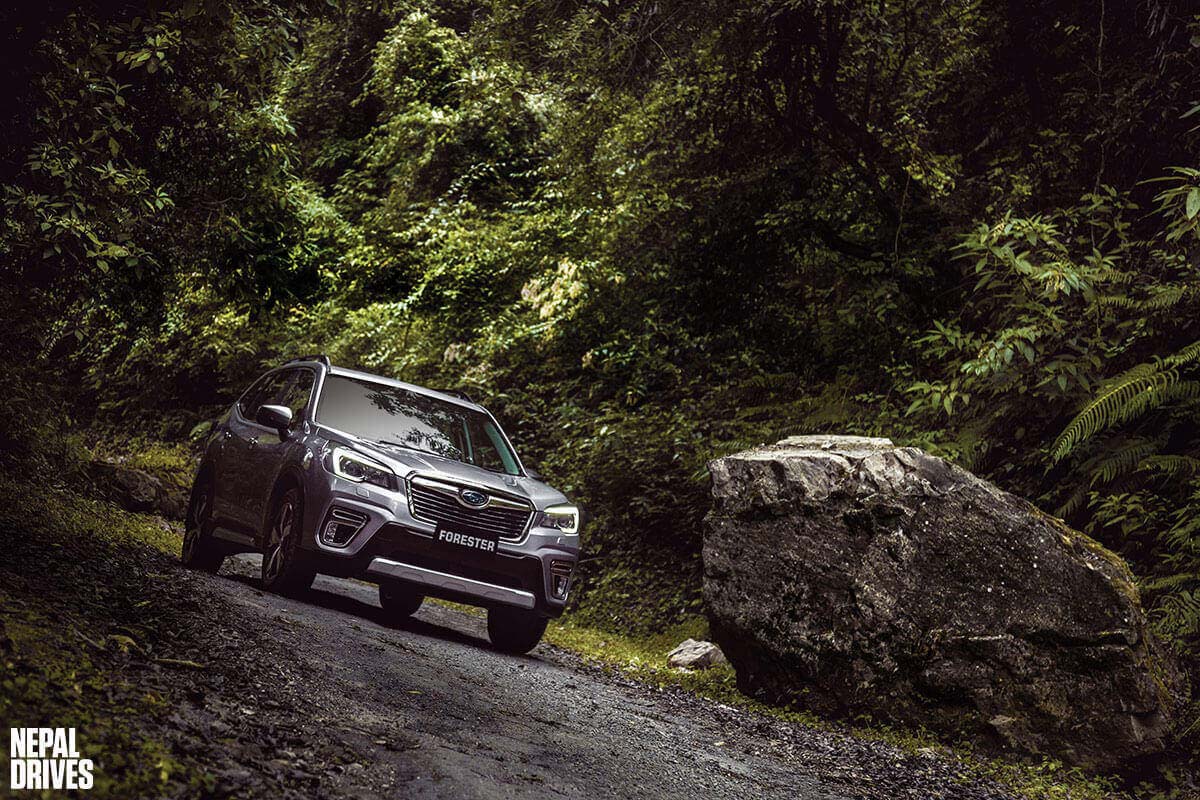 The Subaru Forester takes off its business casuals and slips into camouflage jackets and boots once you venture beyond the concrete jungle. The Forester comes with Symmetrical All-Wheel Drive that distributes power to all four wheels for better traction on less than ideal roads. The Forester feels more confident off-road compared to the tarmac. The high ground clearance and the wide tires will help you cruise through all the undulations with ease. Further strengthening the Forester’s performance off-road is the inclusion of the improved X-MODE.

The X-MODE is Forester’s off-road mode simplified for people who do not want to fiddle with a lot of buttons. With the X-MODE you are one dial twist away from driving through any kind of difficult terrain. There’s Snow/Dirt mode for slippery surfaces covered with dirt, snow or gravel or a D.Snow/Mud mode for especially treacherous roads where you could get stuck, like deep snow, mud or dry dirt. These modes accordingly adjust your gear ratios, suspension and throttle response to make sure you overcome any path you drive into. Paired with the X-MODE is Hill Descent Control which helps you get down a hill safe and sound. The Subaru Forester is impressive on-road but truly shines off the road.

Supplementing the amazing performance is a host of safety features that will keep you safe while you head out in the unknown. The Forester gets ABS with Vehicle Dynamics Control, Brake Vectoring, Auto Vehicle Hold and a set of airbags including front, side, and curtain and knee airbags.

is one of those cars that come with little to no shortcomings, it ticks every box on our list of what makes a good SUV and one really has to nit-pick to find any fault with it. In the entire day we spent with the Forester, the only fault we could find with the SUV was its rather boring front grille. Other than that the Forester is a decent looker, the cabin is premium and practical. 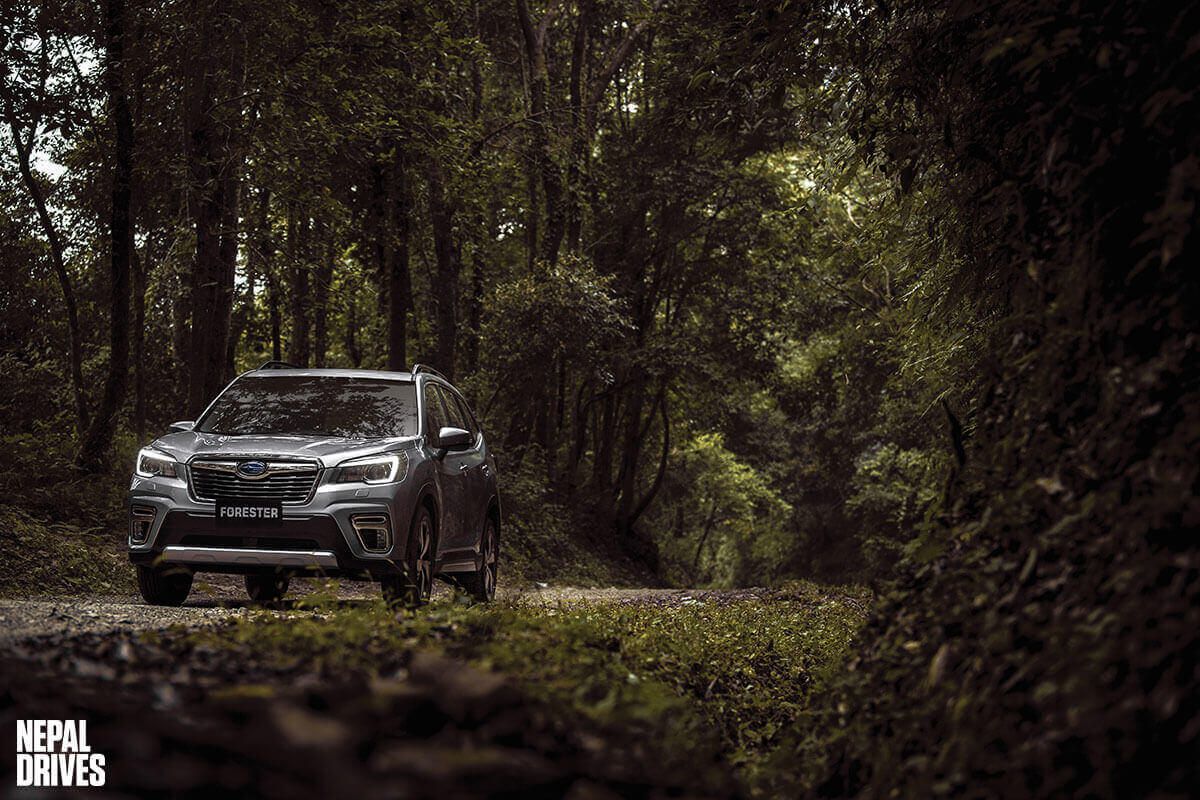