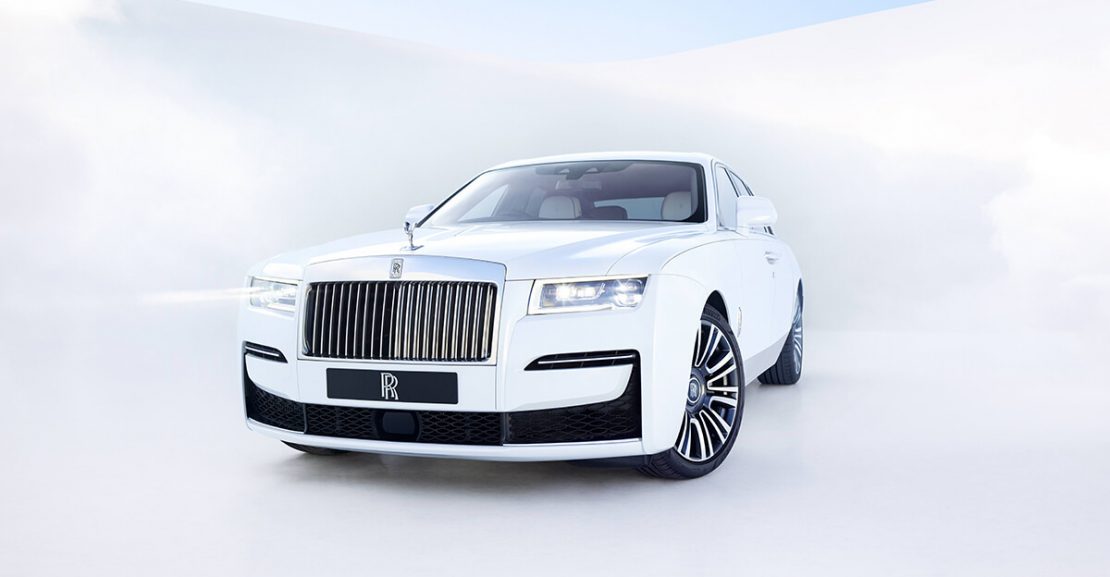 This Is The All-New Rolls-Royce Ghost!

In 2009, Rolls-Royce announced a new addition to its portfolio that offered something entirely different from its flagship Phantom. The execution of the first Ghost, and its laser focus on meeting the demands of its clients, was an unmitigated success, and over the course of its ten-year lifecycle, this transformative motor car became the most successful product in the company’s 116-year history.

Now we have the new Ghost – the most technologically advanced Rolls-Royce yet. The British marquee says the understated personality of the new Ghost is “post-opulent” and rejects “superficial expressions of wealth.” The car is expected to be priced at more than $300,000 when it goes on sale next year. 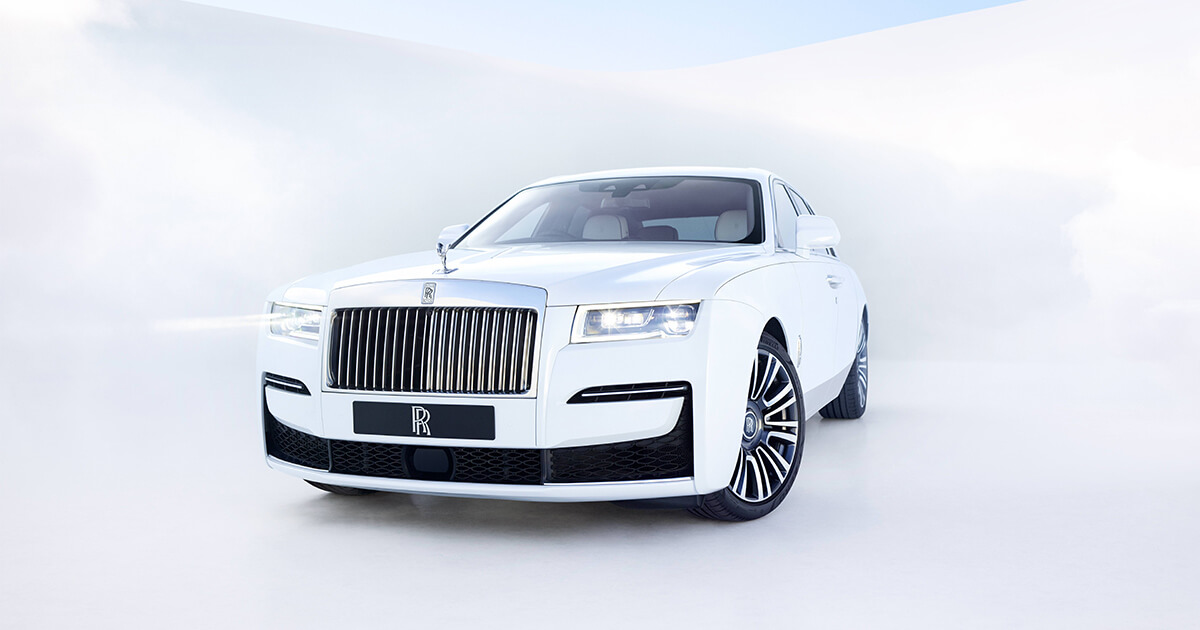 The front of the new Ghost is an exemplar of the design team’s obsession with reduction. Owing to the hand-welded aluminium body structures, the main structure of the car recalls the coach-built Silver Dawn and Silver Cloud. For the first time, the Spirit of Ecstasy is not surrounded by panel lines but rather stands sits within her own ‘lake’ of the bonnet. 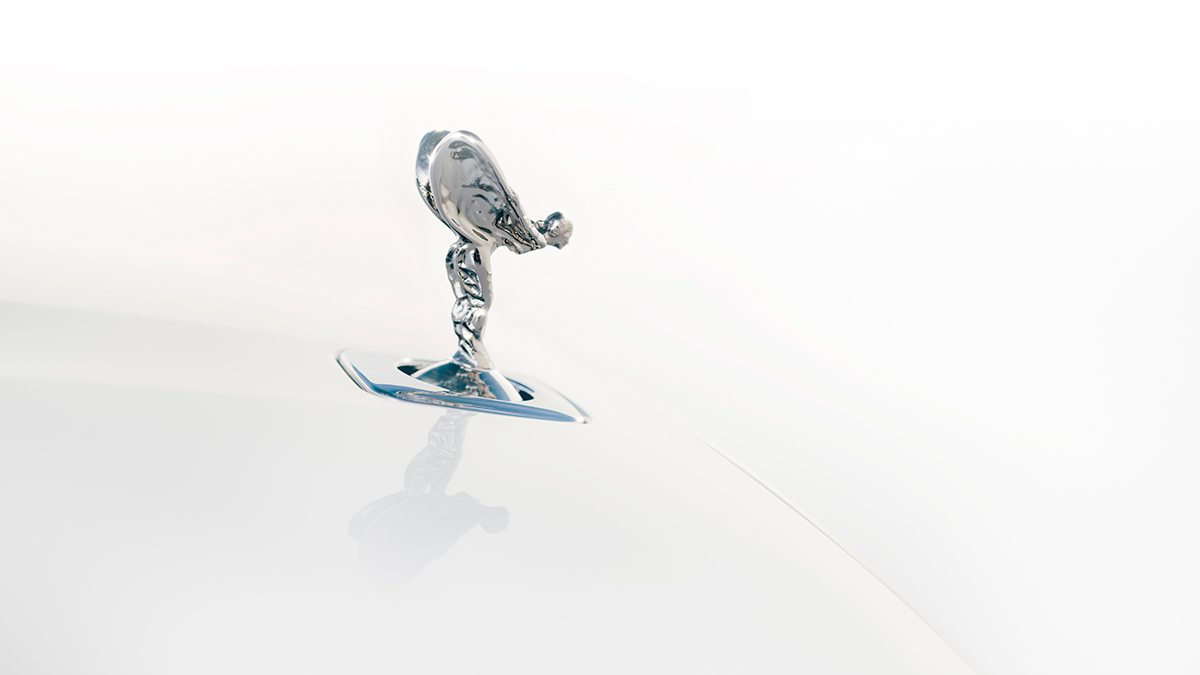 Turning to the flanks, a single straight stroke is used to emphasise the motor car’s length. The lower ‘waft line’ borrows from boat design and uses reflection to lighten the surfacing. Moving to the glasshouse, it is wilfully neutral, with both doors sharing an equally proportioned window graphic, gesturing that new Ghost strikes a balance as both a driver-oriented and a chauffeur-driven car. A subtly arched roofline gently proclaims its dynamic intent.  The rear end follows this sense of movement and resolves in a taper. The subtle near-square rear light graphic has become a tenet of contemporary Rolls-Royce design. It remains but has been modernised with a slight forward tilt. 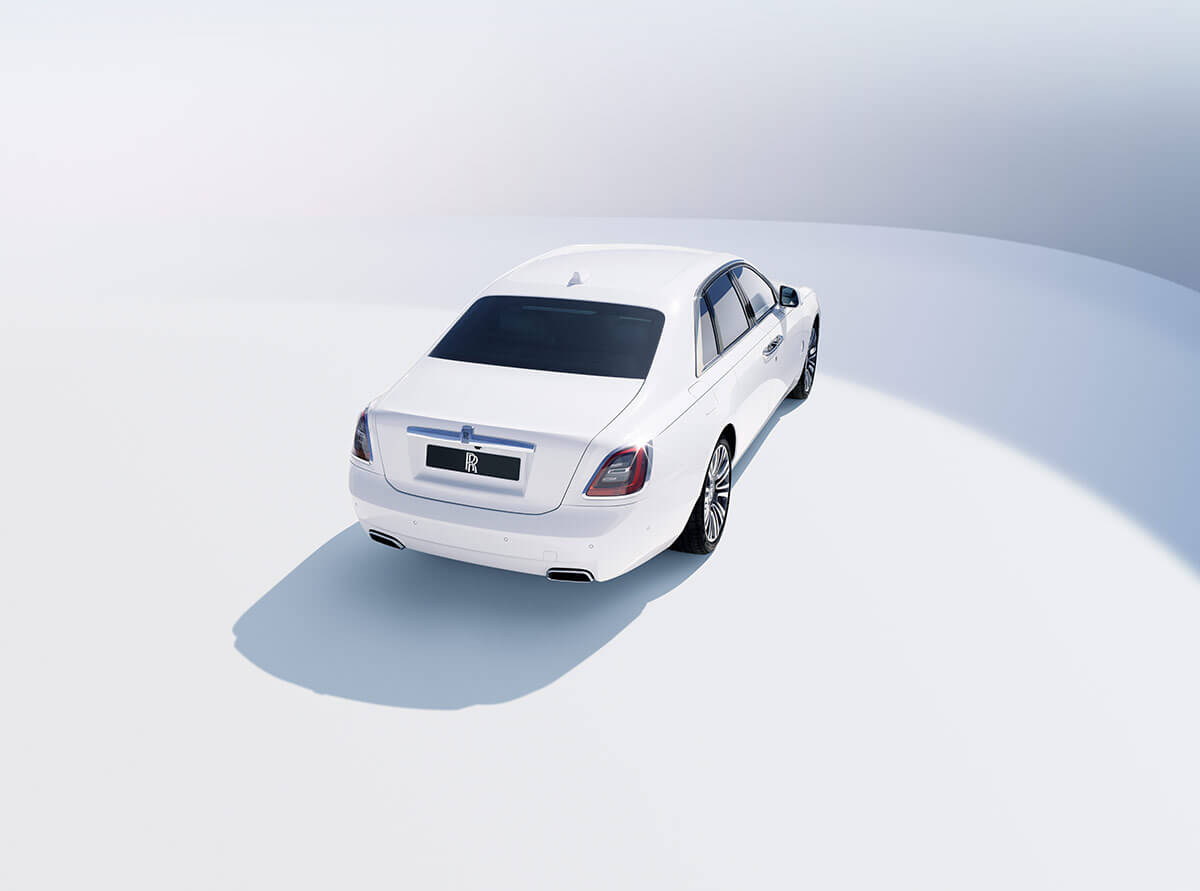 The new Ghost is equipped with a 6.75-litre twin-turbocharged V12 petrol engine. A bespoke Ghost engine map was created to ensure ample performance for this dynamic motor car, delivering 563bhp and 850Nm of torque to the all-wheel steer, all-wheel drivetrain. Maximum torque is available from just 1600rpm – only 600rpm above tick-over.

For the new Ghost, the marque’s Bespoke Collective of designers, engineers and craftspeople created Illuminated Fascia: a world-first innovation that subtly echoes the Starlight Headliner, which has become as much a part of Rolls-Royce iconography as the Spirit of Ecstasy, Pantheon Grille and ‘Double R’ monogram. 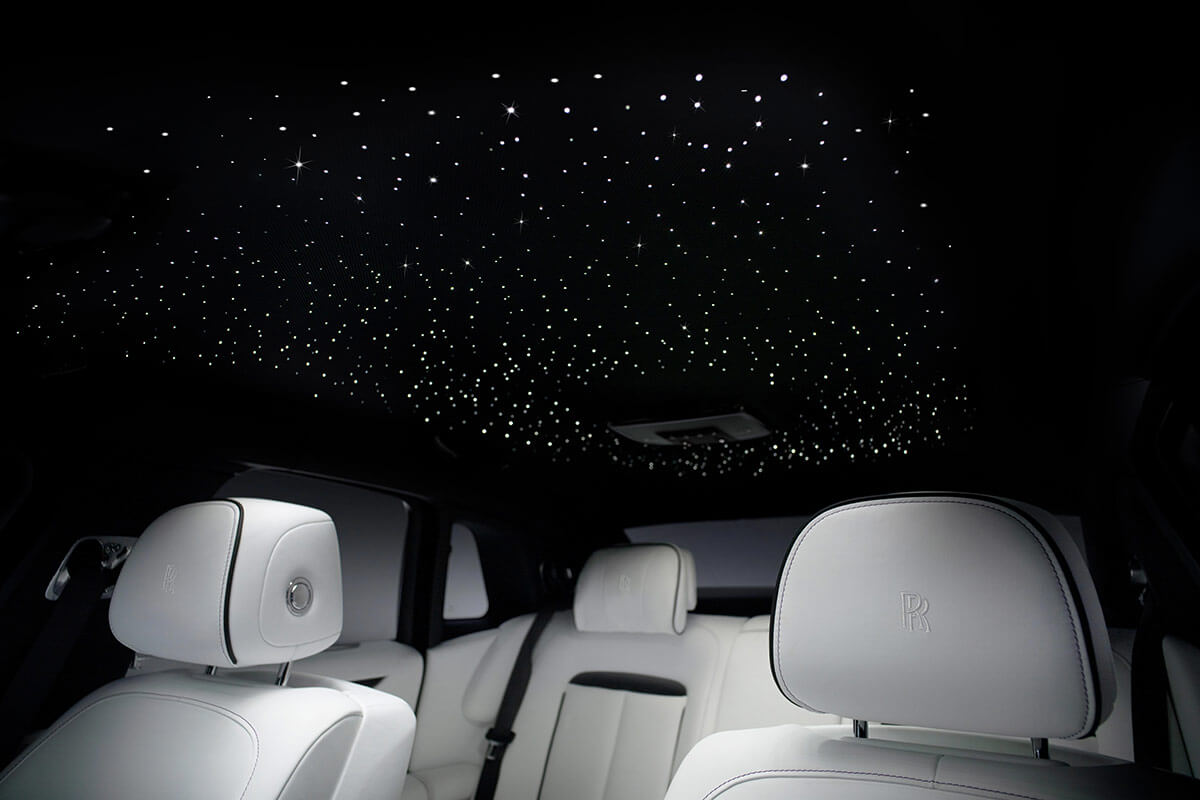 Developed over the course of two years and more than 10,000 collective hours, this remarkable piece brings an ethereal glowing Ghost nameplate, surrounded by more than 850 stars, into the interior suite of the motor car.  The illumination itself comes from 152 LEDs mounted above and beneath the fascia, each meticulously colour matched to the cabin’s clock and instrument dial lighting.

On the inside, each of the 20 half hides used to create the interior suite of new Ghost are subject to the automotive industry’s most exhaustive quality control checks to ensure that each of the 338 panels used – however visible – is of the very best quality. Further demonstrating the marque’s competence in leathercraft, complex, busy stitchwork has been eschewed for scant but incredibly long and perfectly straight lines, again welcoming scrutiny from the marque’s clients. 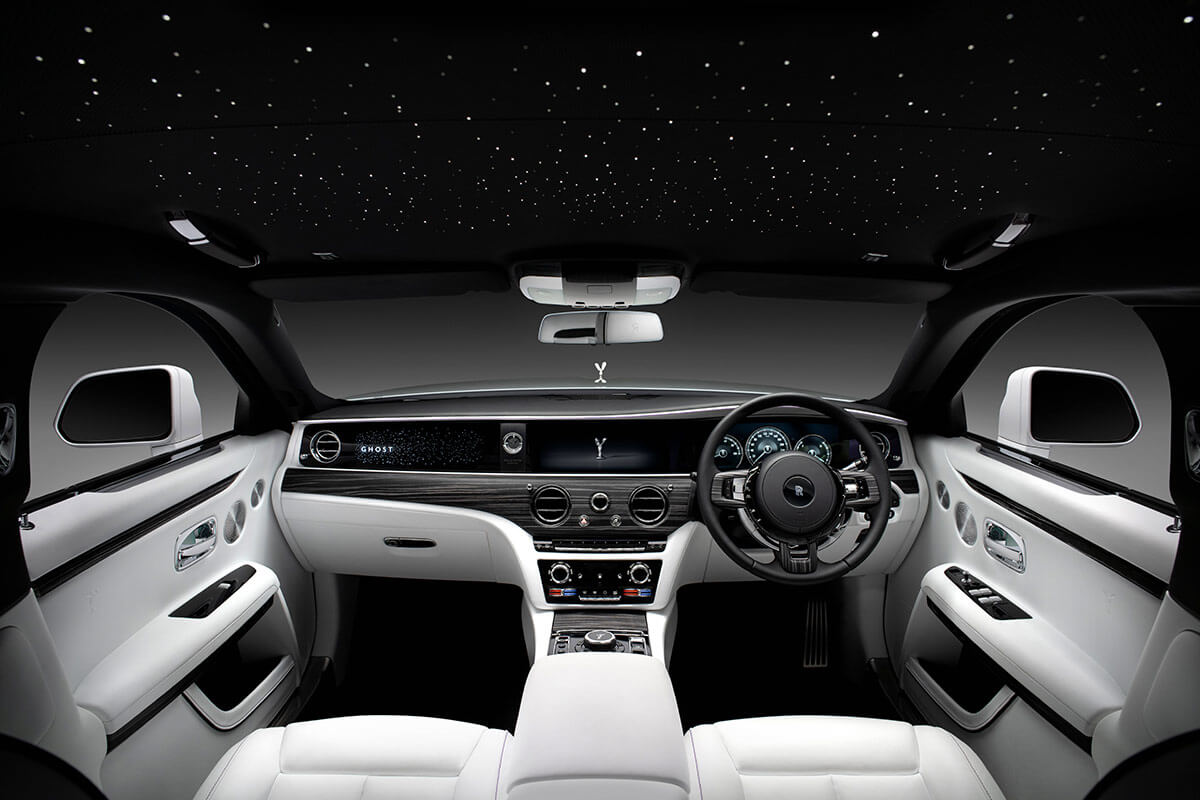 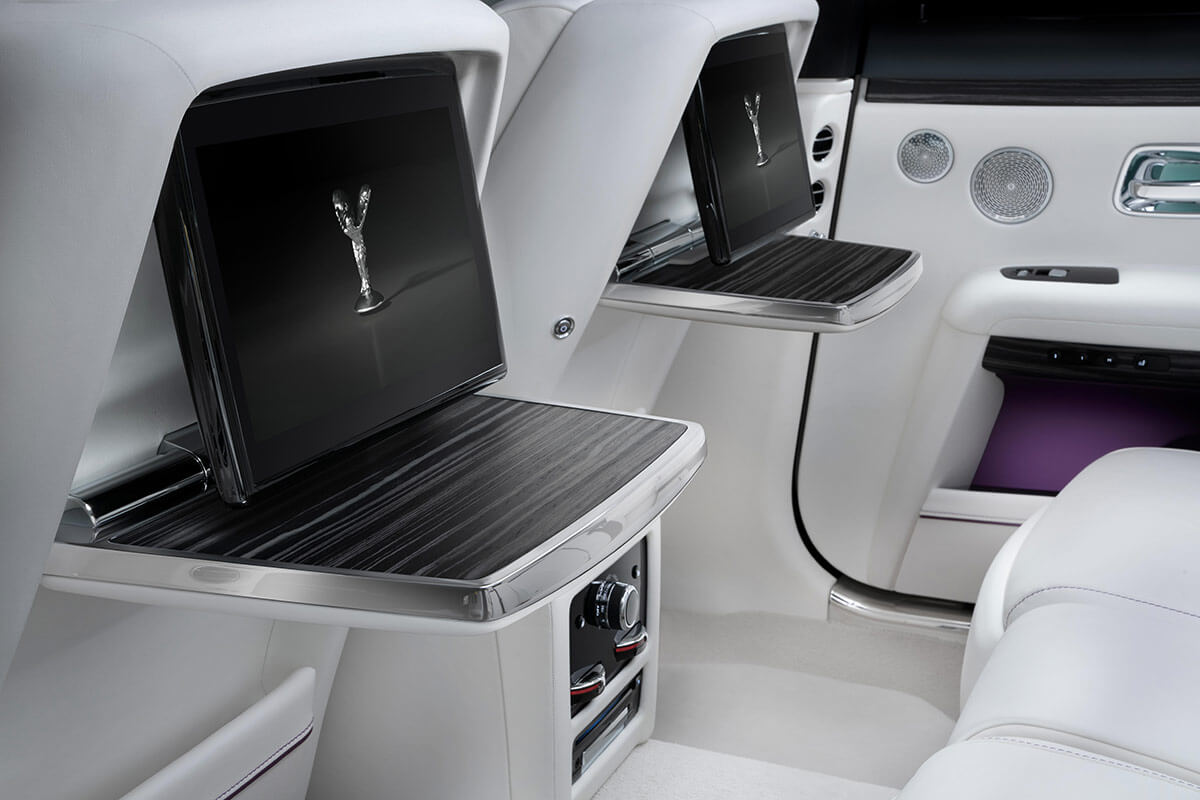 For the new Ghost, engineering specialists redesigned the motor car’s suspension completely to deliver what is called the Planar Suspension System. It ditches the BMW 7 Series-derived underpinnings in favour of the latest flexible aluminium spaceframe already used for the Phantom and Cullinan. It incorporates a world-first Upper Wishbone Damper unit above the front suspension assembly, creating an even more stable and effortless ride. This works alongside the Flagbearer system, which uses cameras to read the road ahead and prepare the suspension system for any changes in road surface, as well as the marque’s Satellite Aided Transmission. 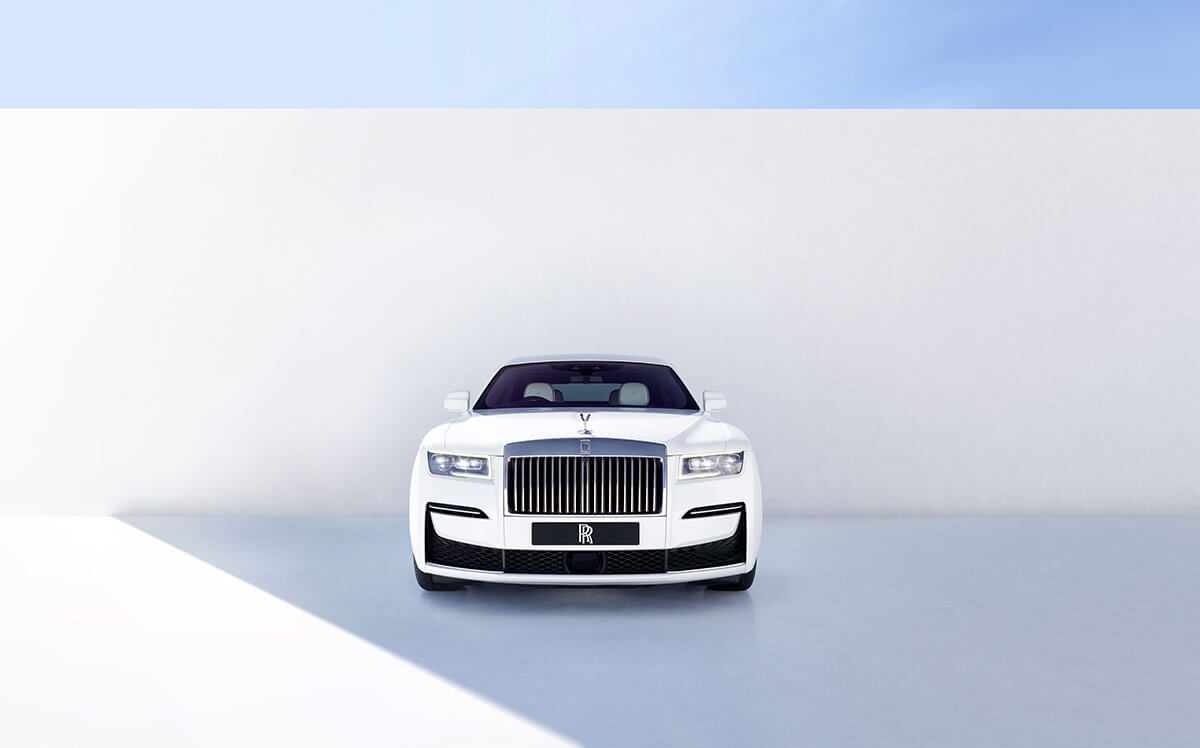 These technologies are managed as one through a bespoke Planar software system. New Ghost can now anticipate and react to the most demanding road surfaces. Reserved exclusively for Rolls-Royce, this technology further evolves the marque’s double-wishbone Magic Carpet Ride suspension system. This also governs new Ghost’s other chassis technologies, including the all-wheel drive, all-wheel steering, stability control and self-drying braking systems. 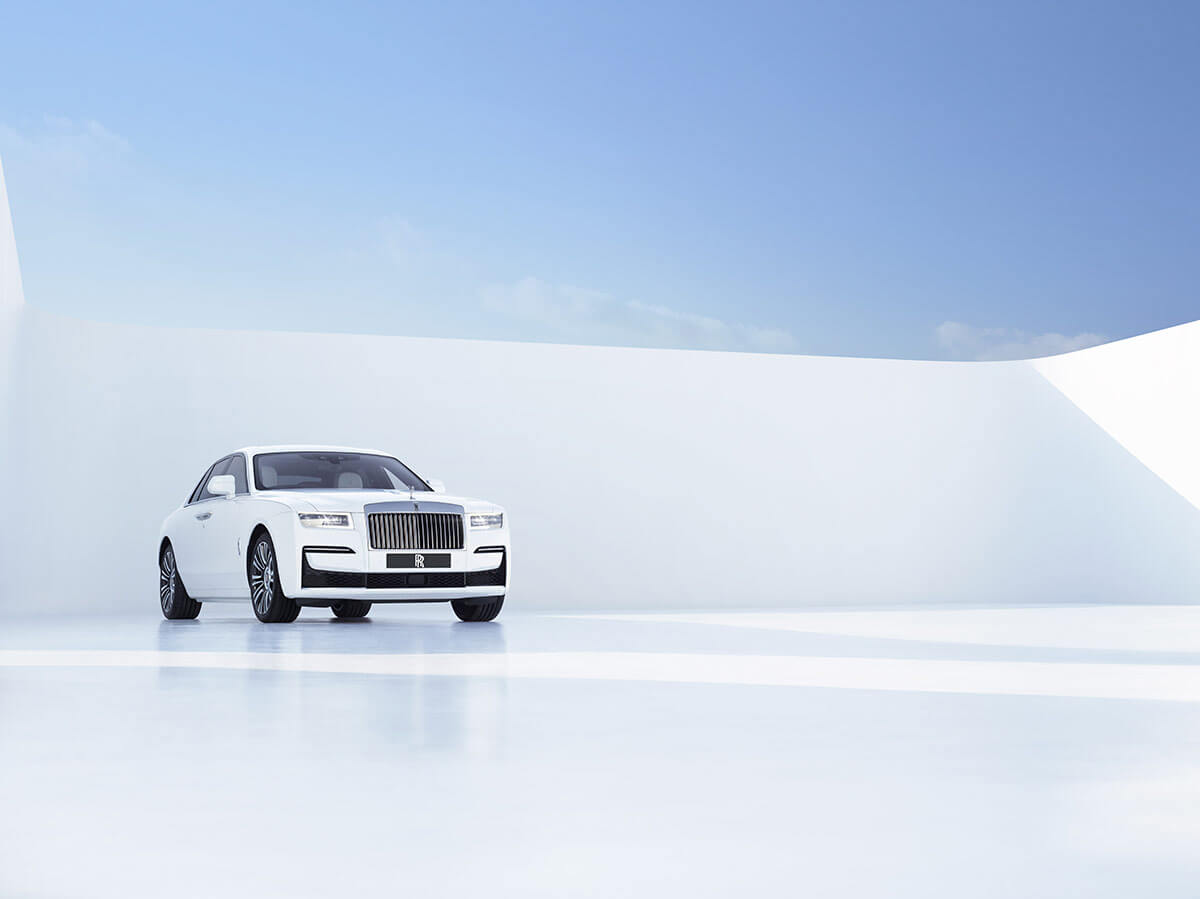 The Planar software also manages information that requires new Ghost to proactively adapt to intrusions in the road ahead. The first of these technologies is the marque’s Flagbearer system that consists of a stereo camera system integrated in the windscreen to see the road ahead, adjusting suspension proactively rather than reactively up to 100km/h. The second is Rolls-Royce’s Satellite Aided Transmission system, which draws GPS data to pre-select the optimum gear for upcoming corners. The result is unprecedented levels of ride comfort and control for a motor car.

The ethos of Roll-Royce’s founder, Sir Henry Royce, was “Take the best that exists and make it better,” and that seems to have resonated with the all-new Ghost.