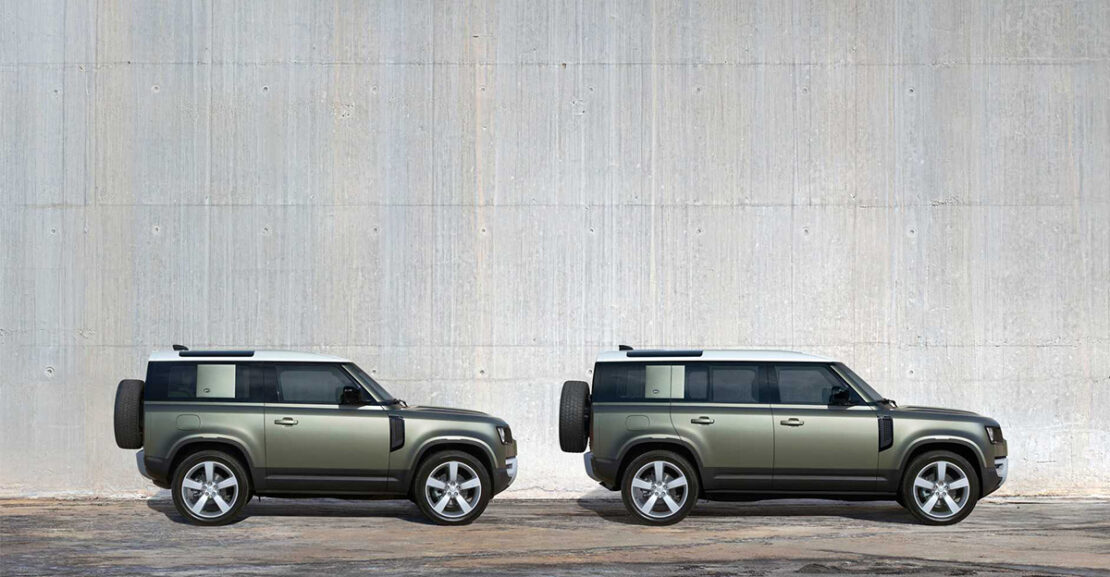 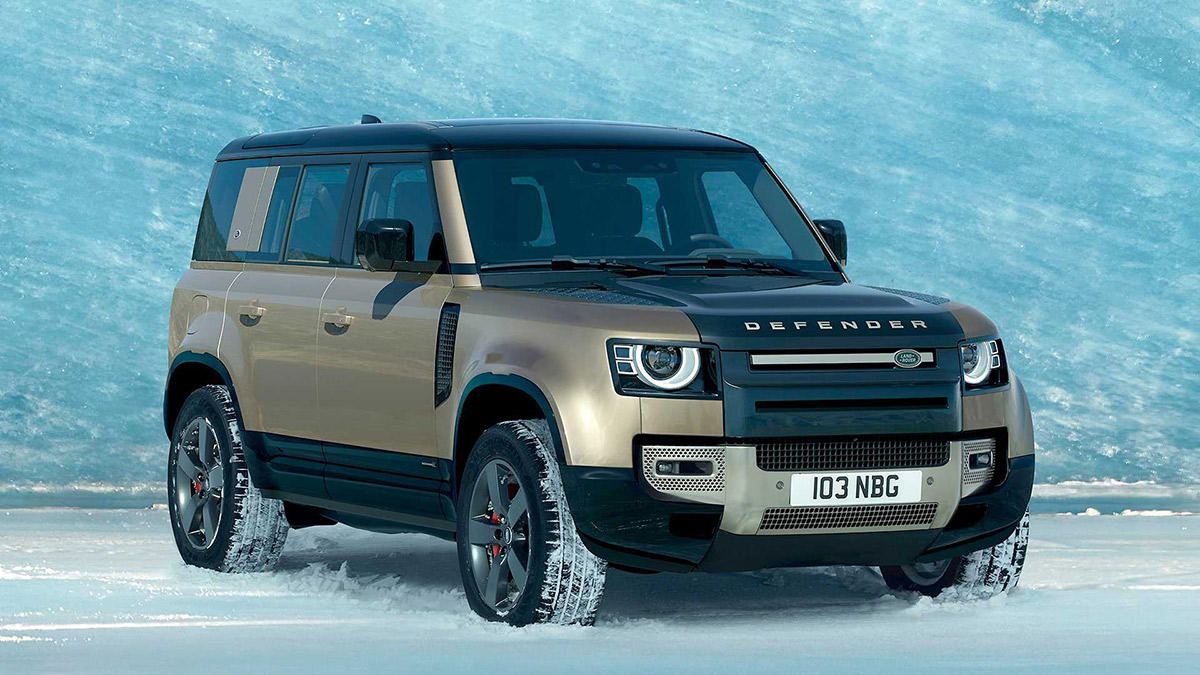 You get a turbocharged 2.0-liter that makes 296 Bhp and 400 Nm of peak torque, this engine is similar to one in the Landrover Evoque, Jaguar E-Pace, and even the plug-in-hybrid Range Rover. The other is a 3.0-liter straight-six matched with a permanent-magnet electric motor and a lithium-ion battery pack. This engine makes a solid 394 Bhp and 550 Nm of peak torque. Both the engines will come mated to an 8-speed automatic transmission that will send power to a permanent all-wheel-drive system. 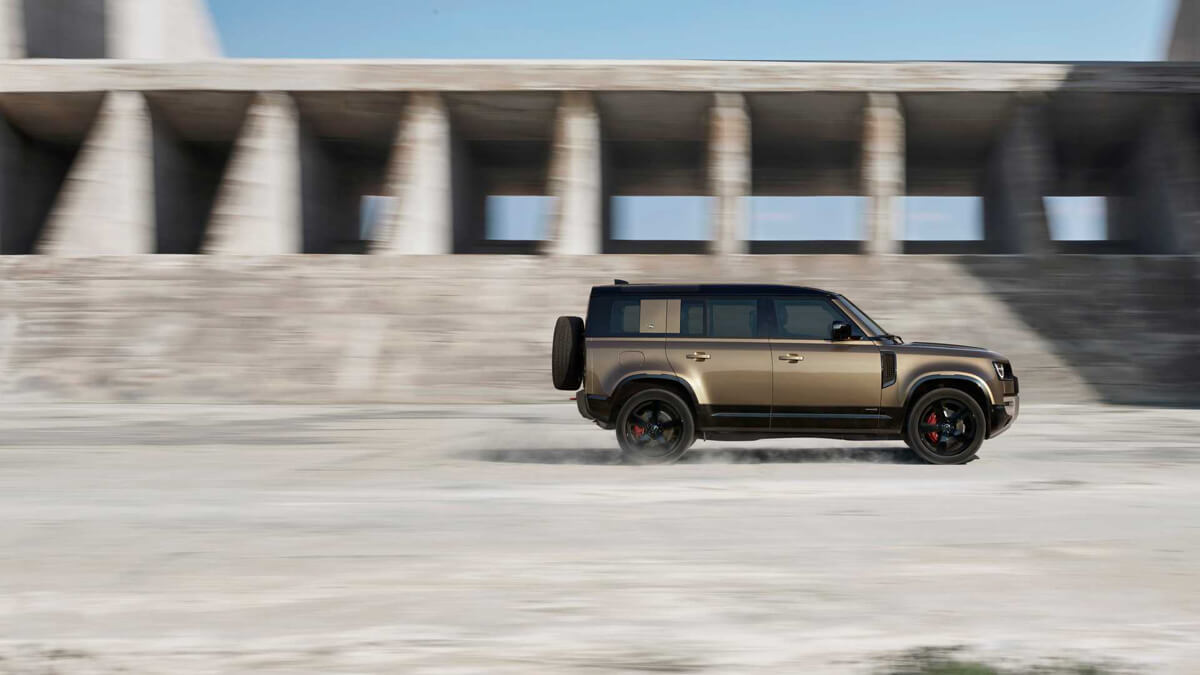 The Landrover Defender gets the familiar and excellent Terrain Response 2 system as well as a manually-locking center differential, an auto-locking rear diff, and also an optional air suspension system that makes the package even more capable. The air suspension offers maximum ground clearance of 292mm and what Land Rover calls “world-class off-road geometry” for the longer Defender 110. The approach, break over, and departure angles are 38 degrees, 28 degrees, and 40 degrees respectively with the latter two figures being better than the Jeep Wrangler Rubicon Unlimited, which is another highly capable offroader. 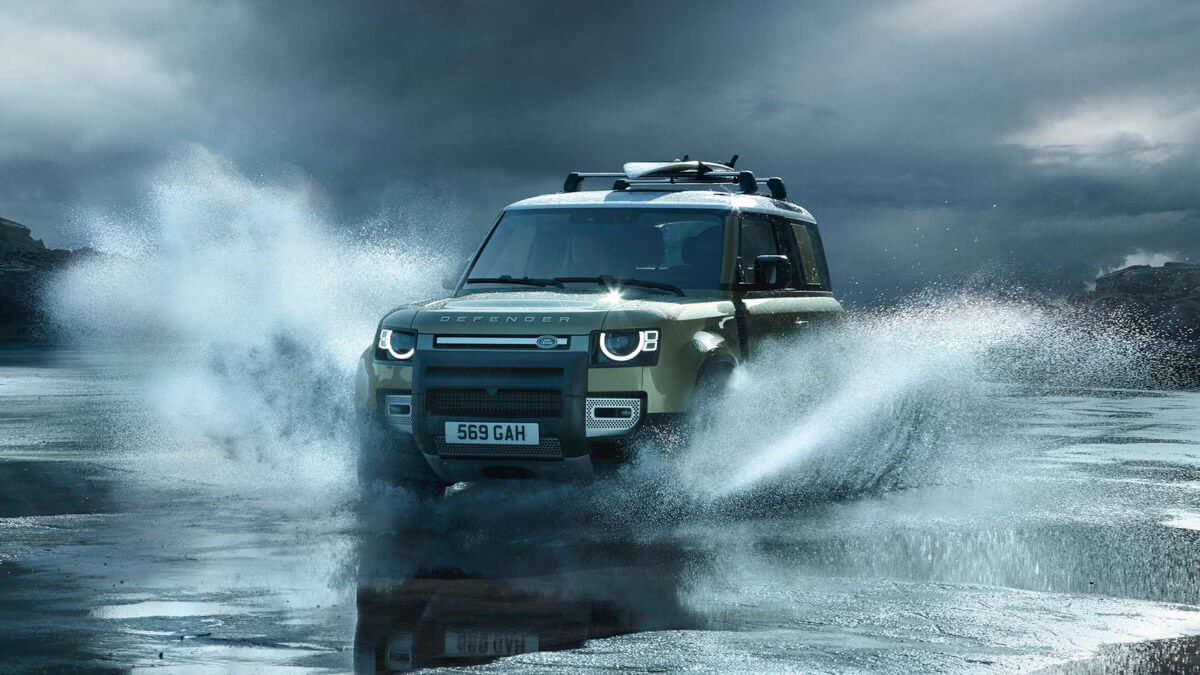 Another area where the Defender scores higher than the Wrangler is in the water, with a max wading depth of 900mm compared to Wrangler’s 762mm. The offroad tech advantage the Defender comes with is the ClearSight Ground View system, which essentially feeds a clear view of the ground on your infotainment screen making it easier to tackle dangerous terrains.

In terms of design, Defender’s characterful front is tough but approachable, emphasized by the geometric forms of its highly technical headlamps which feature the latest adaptive technology, while beautifully sculptured fenders combined with squared wheel arches and strong shoulders all contribute to the vehicle’s sense of solidity and robustness. At the rear, the geometric forms of the distinctive high-tech lamps harmonize perfectly with the front end design. The sheerness of the rear vertically maintains the short overhang for a superior departure angle, while maximizing interior space and accentuating the vehicle’s strong shoulder section.

On the X derivative, the gloss black inset contrast bonnet is standard along with Gloss Black claddings. To give further differentiation between the X and the Core vehicles, the front and rear skid pans and other detailed exterior parts are coated in a Starlight Satin finish. New Defender is also the first Land Rover available with a factory-fitted Satin Protective Film, which delivers enhanced design and durability. The PU-based wrap is applied to external bodywork and gives the standard metallic paint a rich and contemporary satin finish, showing the sophisticated surfacing of the exterior design in the best possible light. This durable wrap meets rigorous standards and has been developed for the highest performance in extreme conditions. 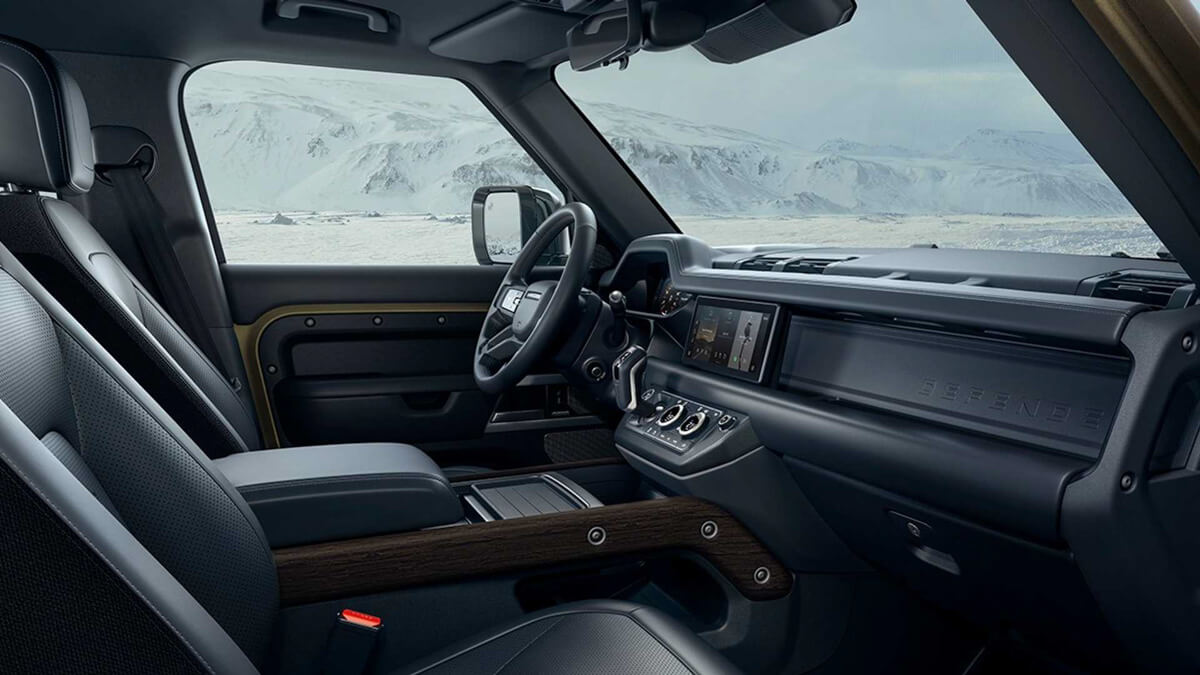 Interior Comfort is also a key part of New Defender, with interior materials focused on retained newness – so even after thousands of miles of adventure the Defender is sure to look and feel fresh. Customers can choose from three interior color schemes with scope for personalization, available by mixing these with different interior finish options. Top of the line HSE models features high-grade Windsor Leather, while the Defender X features Windsor Leather in combination with Steelcut Premium Textile accent for enhanced durability.

This premium textile from Kvadrat is a 30 percent wool blend and is also available as a full alternative to the leather upholstery paired with Miko Suedecloth. The main controls, including the central touchscreen, are ergonomically clustered within the magnesium frame to enable the installation of an innovative optional front row center seat while also allowing for movement across the front of the cabin while there’s an abundance of storage opportunities, including a choice of high and low center consoles.

The Defender has always been a symbol of strength and the new model is the toughest and most capable Land Rover yet, combining a new body structure with world-first technologies and proven hardware to create a Defender that is fit for the 21st century. The lightweight all-aluminum monocoque construction of the new D7x architecture delivers the stiffest Land Rover body ever created, with a torsional rigidity of 29kNm/Degree – making it three times more rigid than traditional body-on-frame designs.

Land Rover has introduced a series of technologies to help deliver the capability customers expect from a Defender, including the latest generation of its patented Terrain Response system. Configurable Terrain Response technology allows drivers to use the touchscreen of the new Pivi Pro infotainment to fine-tune every aspect of the vehicle to suit its precise surroundings. In the New Defender, drivers can prevent cross-axle slip using the Centre Slip Limited and Centre and Rear Slip Limited options on the central touchscreen controller.

In addition, there is a choice of three settings for the throttle and gearbox response, steering and traction control, allowing experienced off-roaders and all-terrain novices to tailor the vehicle set-up to suit their requirements. The system allows four individual profiles to be saved, so different drivers can quickly activate their preferred settings. 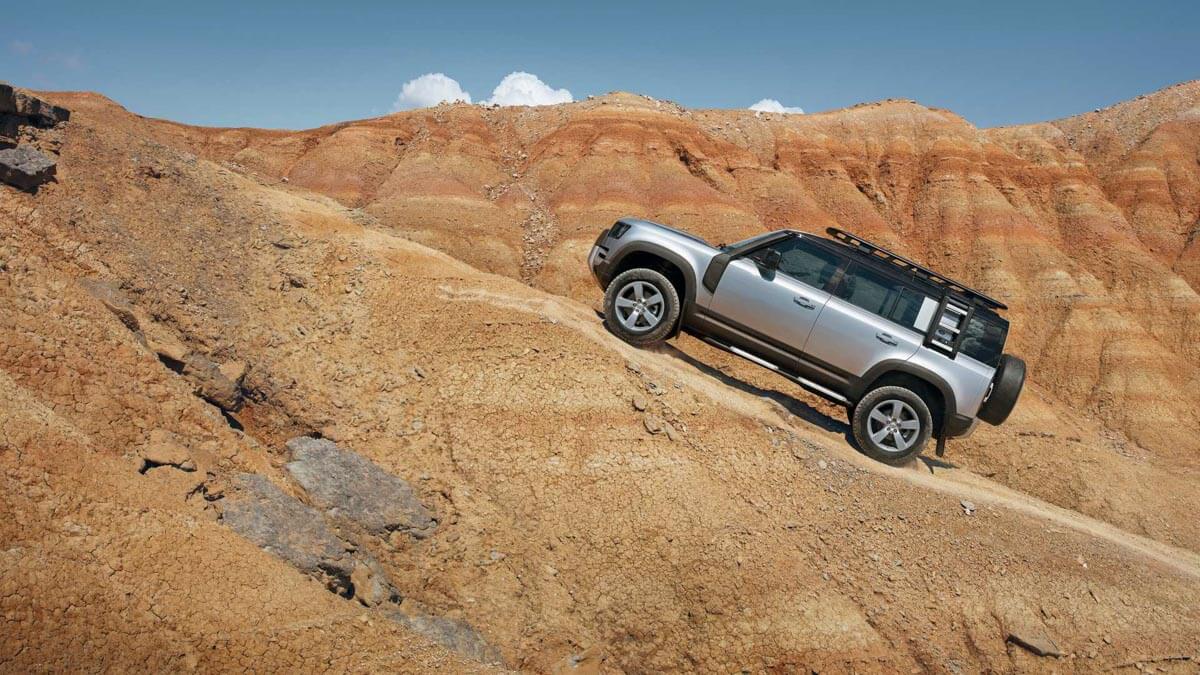 Alternatively, the intelligent Auto functionality of Terrain Response 2 can recognize the surface and configure the vehicle appropriately with no input from the driver. Landrover has not provided any launch date for the new Defender, but the longer Defender 110 will be launched first followed by the shorter Defender 90. 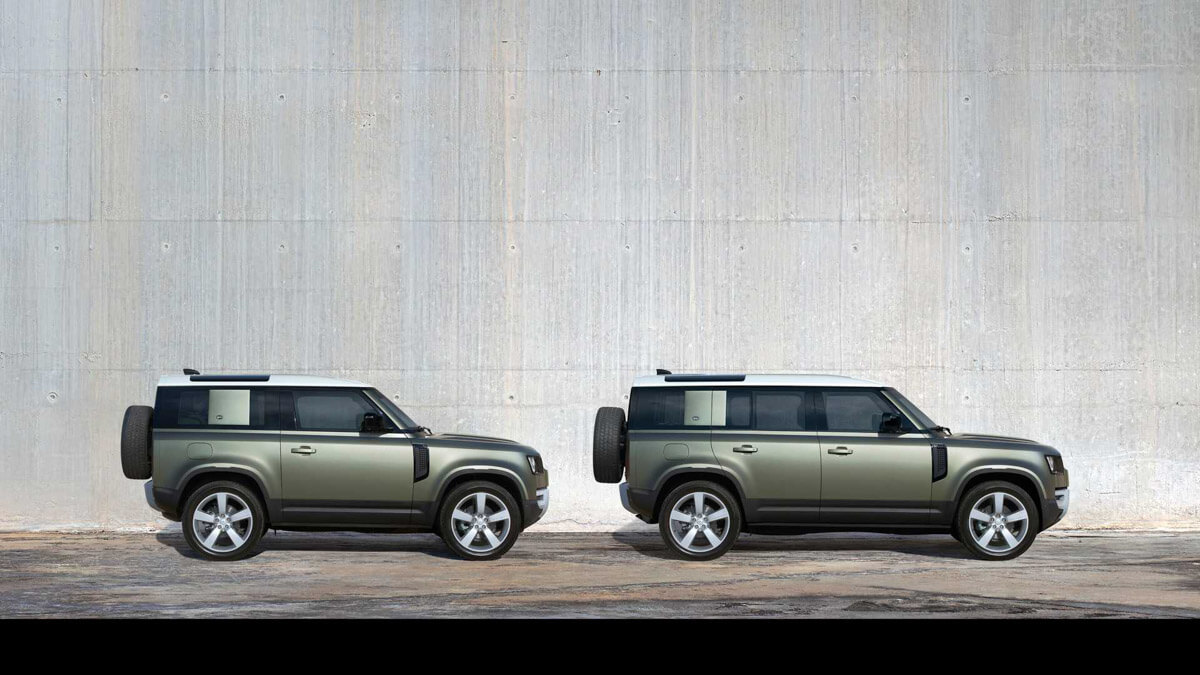