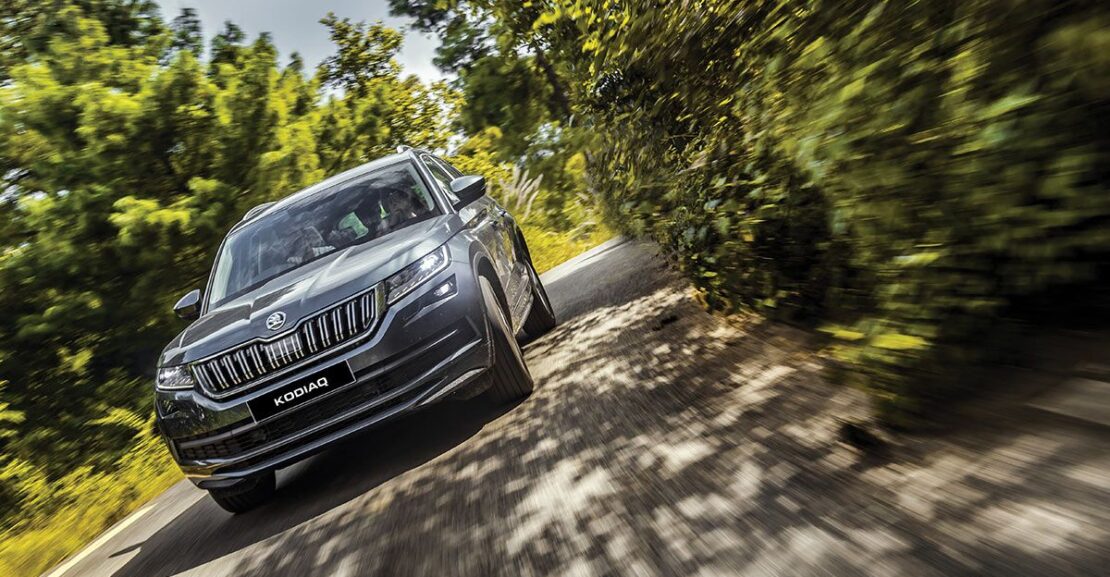 Škoda Kodiaq: The First Of Its Name | Test Drive, Review

Truth be told, Škoda has not been big on SUVs. Yes, the Yeti made a name for itself in the global market and impressed many including Jeremy Clarkson. However, the oddball styling and a steep price did not see it selling like hotcakes in our part of the world. Instead, their strong suit is their lineup of premium sedans. The company started its stint in Nepal with the Laura and later Octavia, followed by the aptly named Superb. Although they did introduce the Fabia and Rapid to compete in the larger chunk of the market, it was their premium sedans that really help up their reputation. Despite the slump in demands for sedans in Nepal (induced by the godawful roads), Škoda managed to keep its head above water. They were just that good. 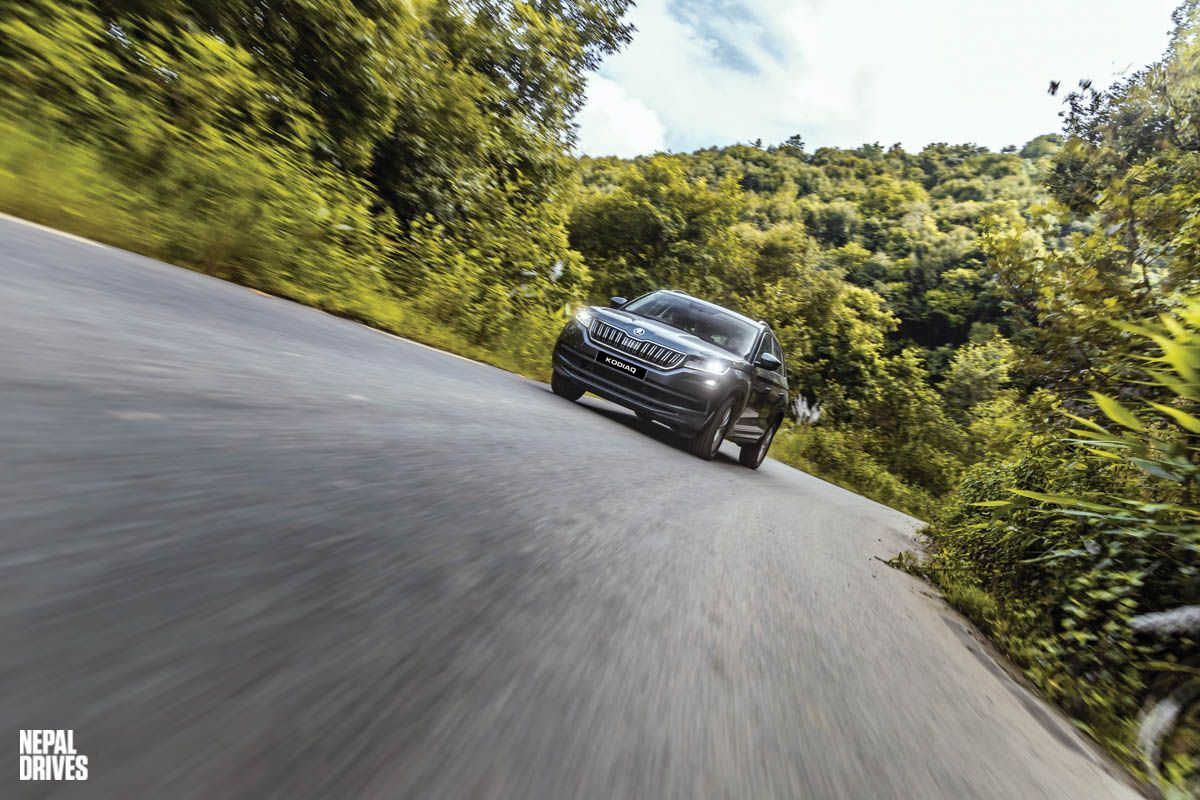 But, for now, let’s get back to the Yeti. What is it that made it a hit with the world’s most outspoken car critic? The fact that it’s fun to drive, practical for a growing family, and robustly built. However, for many, it lacked the finesse and features that Škoda exhibited with its other offerings. 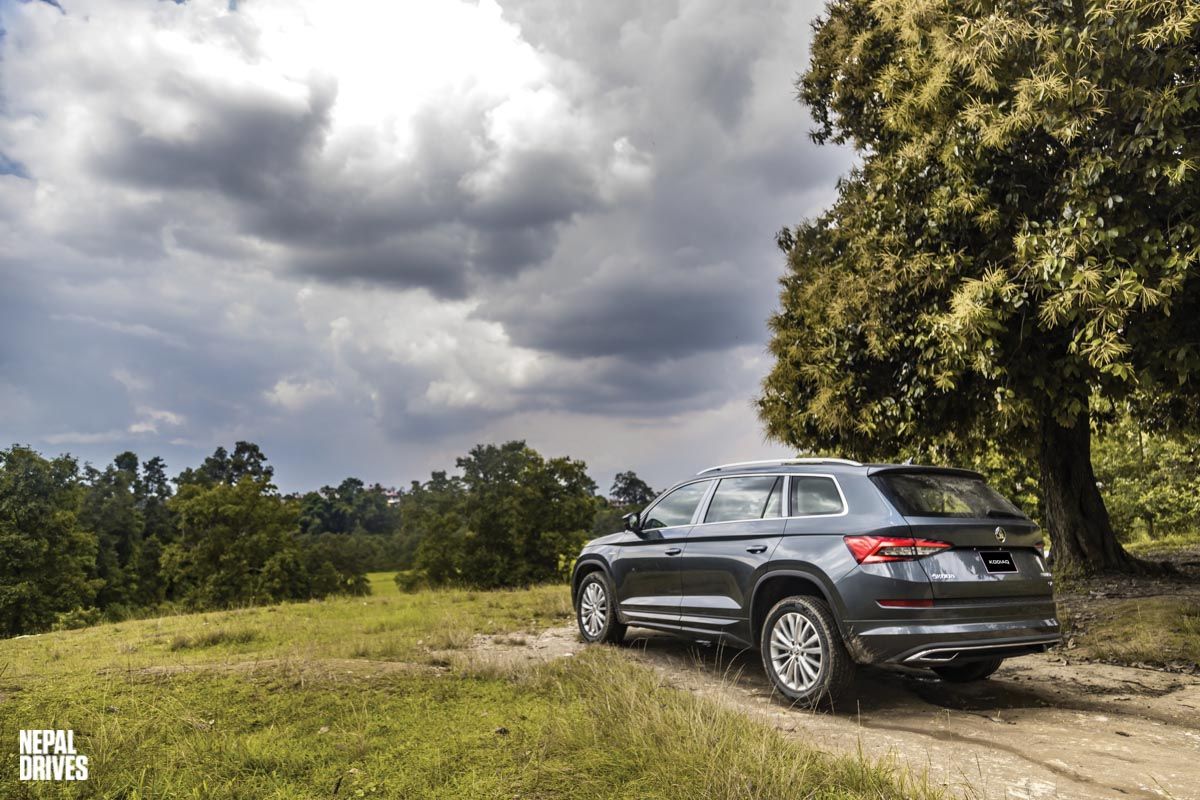 Now, Škoda’s new-gen SUVs will be big, very spacious, conventionally attractive and, like its sedans, loaded to the gills with features. First in line to enter our part of the market was the Škoda Kodiaq. Dressed to impress, yet seemingly a very utilitarian family SUV, the Kodiaq definitely seeks to make itself noticed.
While it took us a long time to get our hands on it for a proper review, we were finally able to bag the keys to the Škoda Kodiaq which somewhat made up for the delay. The Škoda brand is one of the oldest car brands in continuous existence. It started out in 1895 as a bicycle-maker. The company was called Laurin and Klement then, named after its two founders Vaclav Laurin and Vaclav Klement. It was only in 1925 when this establishment was bought over by the Škoda Works conglomerate did these cars start to sell under the Škoda name.

Step Up To The Kodiaq And You Will Immediately Notice The Škoda Design Language That Exudes The Class And Simplicity Of Former Head Designer Jozef Kabaň.

The crisp details and bold lines easily stand out. The company has brought in the precision of the designs based on Škoda’s new design language for its SUVs.
The concept for its front headlights is one of its characteristic elements. The Czech-crystal-like, multi-element, all-LED headlights are enclosed in slim and sharply defined pods.

They are sharply drawn back and placed flanking the top of the radiator grille to protect it from damage when it ventures off the beaten path.
The front grille gets vertical slats accentuating the front look of the SUV. In its profile, you get to appreciate the slender yet robust design of the Kodiaq, further augmented by the sharp body lines. The massive square wheel arches and angular mud flaps, enhance the off-road prowess of the Škoda Kodiaq along with the roof rails. 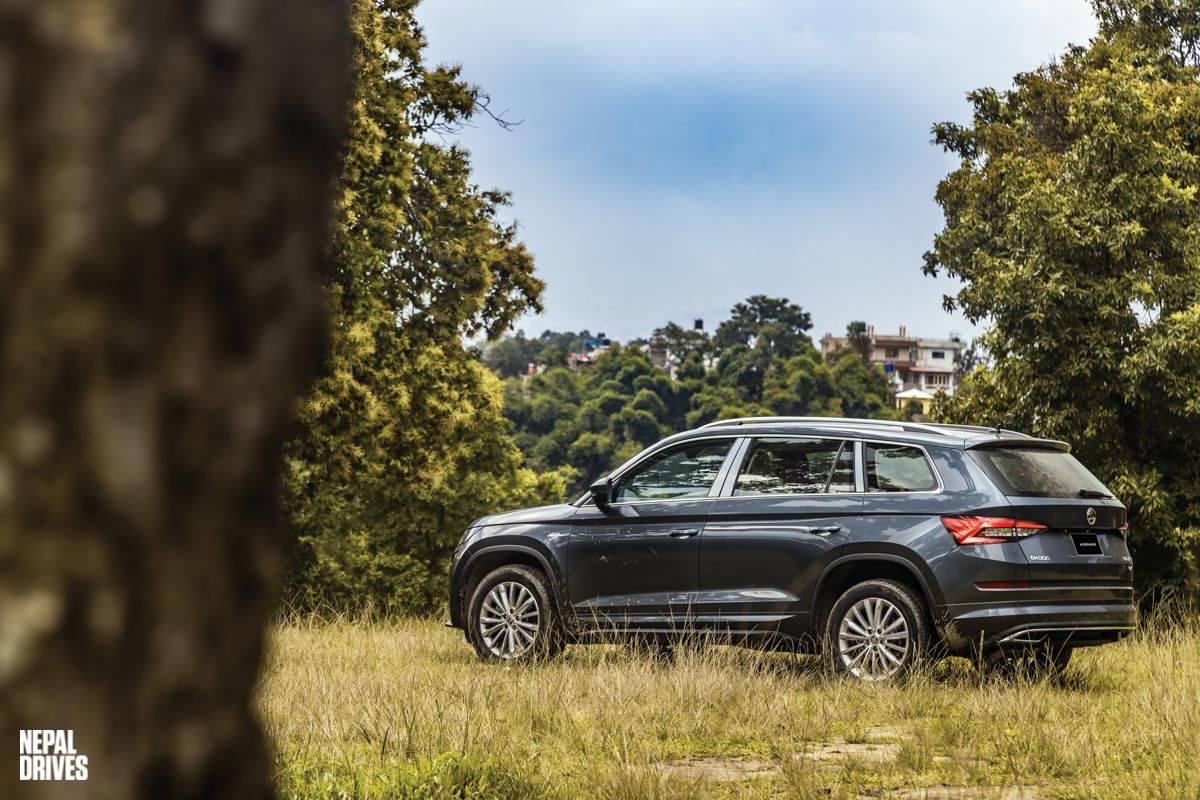 In the rear, the sharp design language continues with the rear lights penetrating deep into the fenders. Staying true to the notion of blending form with function, you get a honeycomb strip between the “cat’s eye” reflectors that have an aesthetic as well as practical function. It runs around the edge of the luggage space, protecting the bumper from damage during load handling. In terms of the stance, the Kodiaq is built like a proper SUV. Then you come to realize that it is a seven-seater, for which it is not exceptionally large. In fact, shorter than the Superb and just 40mm over the Octavia, it is compact.

So how does it achieve all that space on the inside?

Firstly, it uses a transversely located engine as opposed to a longitudinal one, which allows it to have a short bonnet and a long cabin. Then you have the shallow dashboard that allows the driver to sit far ahead in the cabin allowing for more room. You are put right up against the windshield because of this but it did not pose much of an issue… once we got used to it. 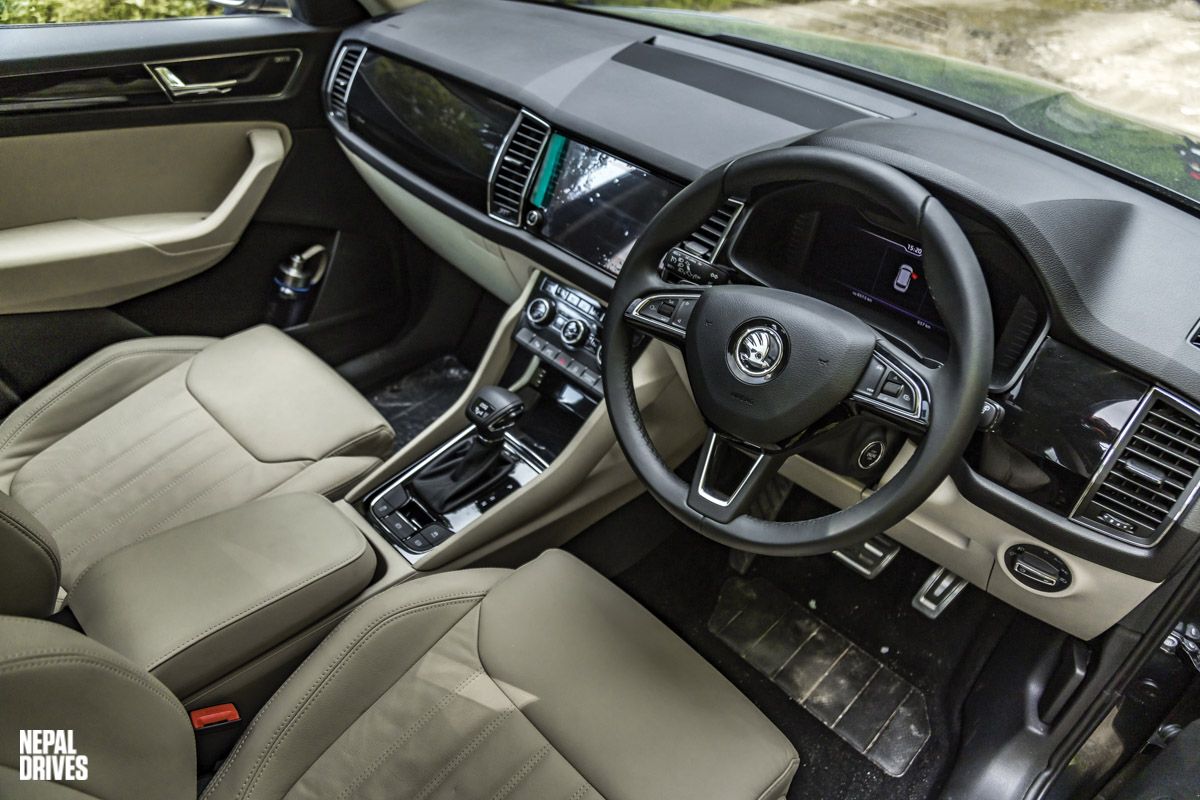 Despite the compact dash, you get plenty of storage space with two glove boxes that get a faux wooden finish which enhances the up-class appeal of the interior. The dash and door-pad inserts are now finished in piano-black, seats and infotainment home screen. You also get a Virtual Cockpit with a fully digital instrument cluster. The system manages to provide you with a lot of information clearly and the high-res screen is more legible than traditional dials. We loved the new 360-degree camera that’s incorporated into the console. The system uses feed from four cameras, one in the grille, one on each of the wing mirrors and one at the rear. You can choose to see each camera’s feed separately or in a top-down view. It comes as a great help when fitting this car into tight parking spots, the hands-free parking feature makes life even easier. 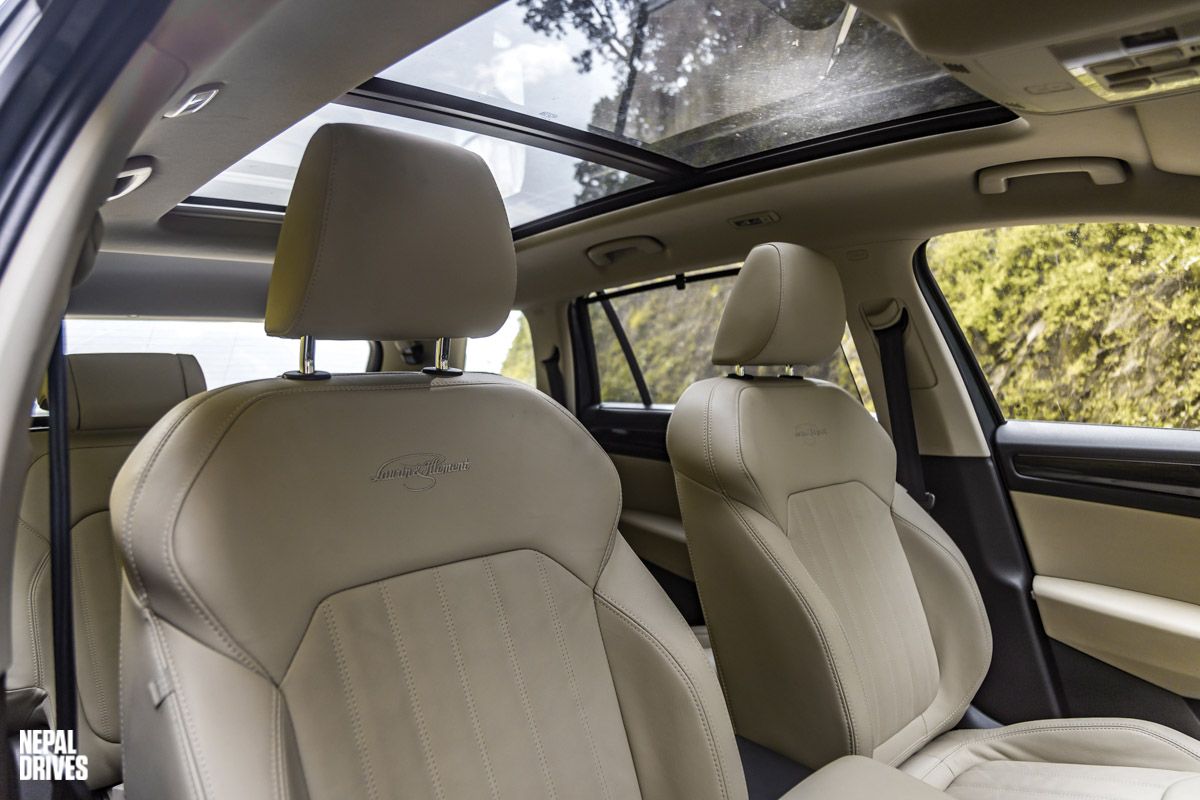 Other clever features that really help you fall in love with the Kodiaq are things like the door edge protectors that extend to protect the door when it is being opened, umbrella holders in the doors and a mini LED torch that can be magnetically attached to the body of the car to provide illumination. You also get what Škoda calls a ‘virtual pedal’ for the boot. With the keys in your pocket, wave your foot under the hatch and the boot lid lifts up. This is for when you’re hauling groceries or other loads and your hands are full; it saves you the trouble of putting your stuff on the ground, opening the boot lid manually like a Neanderthal, picking up your stuff and loading it in. However, it does not always work perfectly, and we imagine you would look somewhat like a doofus holding several bags and prancing on one foot behind your car. But we would definitely take the gamble because it is a pretty cool feature once you get the hang of it. 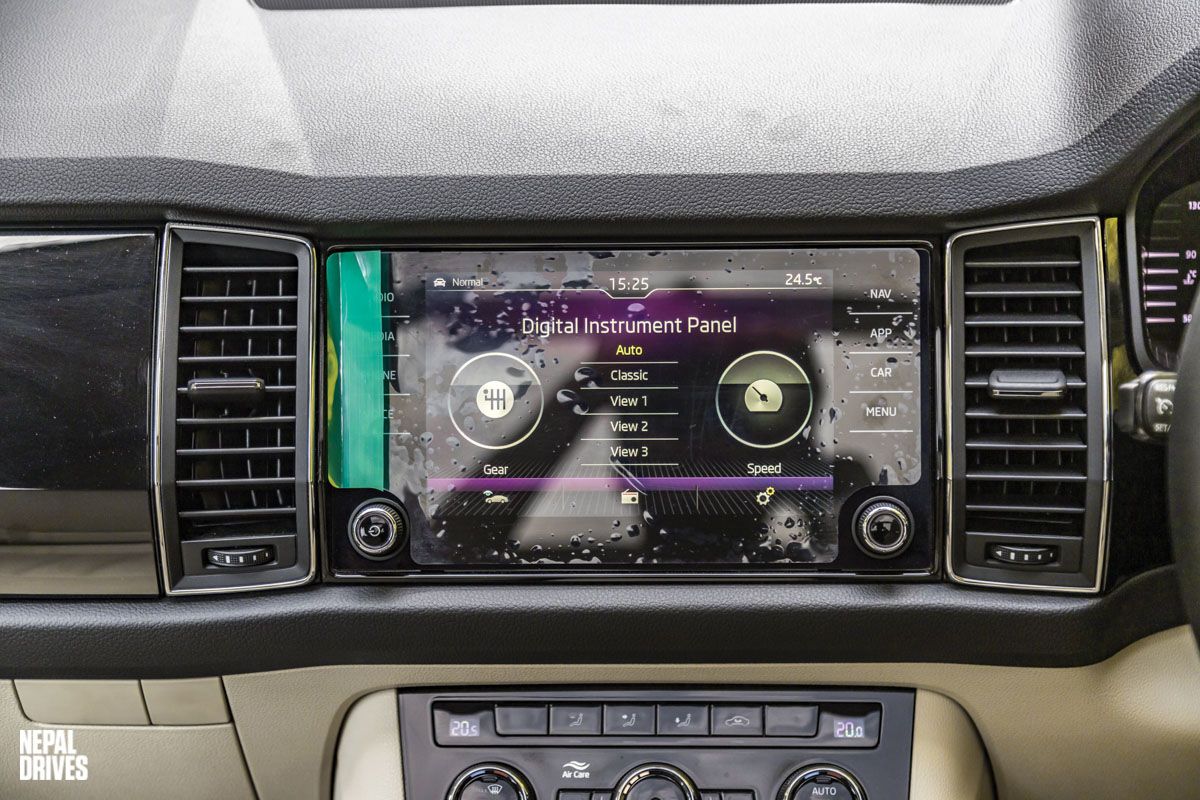 Inside, the best place to be is in the second row. It is a very comfortable place to be, with plenty of thighs and back supports, and with enough space to seat three large adults comfortably. On longer trips (or when you want to take a short snooze), you can incline your seat, extent the collars integrated into the headrest, and gaze out into the open sky. Which brings us to the huge panoramic sunroof of the Kodiaq.

Our least favorite seats were the third row. It definitely isn’t spacious, especially when you’ve gotten nice and fat after the festivities. The second row can be slid forward, and if you pull the front seats forward marginally, you can accommodate adult passengers in the back. But to get in you have to climb up into the cabin via a narrow gap between the second-row seat and the door frame. The lesser coordinated folks, like us, will have trouble getting out without it looking like the car is giving birth to a baby giraffe (or hippo). Worst of all, the seat has practically been placed on the floor, so the seating position is very knees-up which makes it practical only for children, or for very short drives.

But, If You’re In The Škoda Kodiaq, Short Drives Will Rarely Ever Suffice.

The Škoda Kodiaq is well adept to get you through the daily grind. It is luxurious, comfortable, and easy to drive around. However, you will always find yourself itching to take the Kodiaq out for long drives, the ones where you just set out with no destination in mind, only certain of discoveries and adventures that the world holds for you. Regardless of where you head out to, the Škoda Kodiaq is a willing companion. Under the hood is the VW Group’s 2.0 TDi engine that shells out 150BHP and a healthy 340Nm of torque from 1,750rpm. More importantly, you get the seven-speed twin-clutch gearbox which is one of the best in the business. 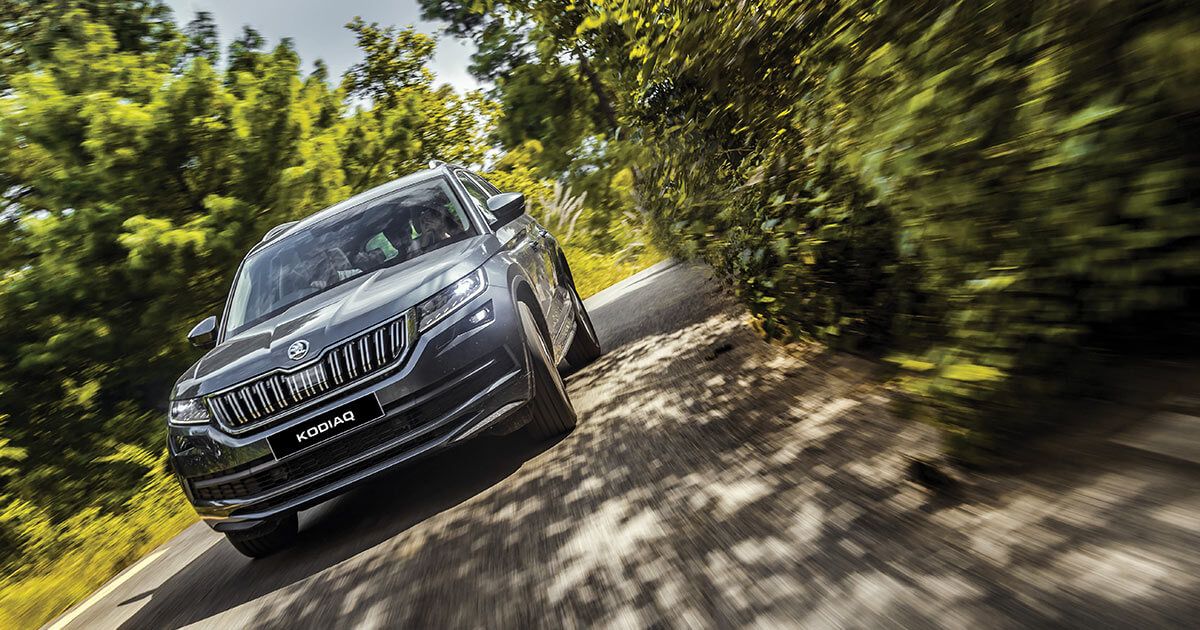 This combination allows the Kodiaq to make a massive impression on the driver. You might notice a slight turbo lag at lower revs, but once you’re past the 1400rpm mark the Kodiaq moves at a surprising pace. It moves effortlessly, belying its mass. The mid-range torque feels punchy and the motor shows sincere eagerness to rev, especially in Sports mode where the gears hold longer and the throttle response is improved. That being said, it is important to point out that the engine is not geared for fast performance. To get the best out of the engine, you’ll have to short shift with the paddle shifter at the 4000 rpm mark because the engine struggles to get past the 4500 rpm mark. Nevertheless, considering the 148 BHP that powers this massive car the performance is decent. 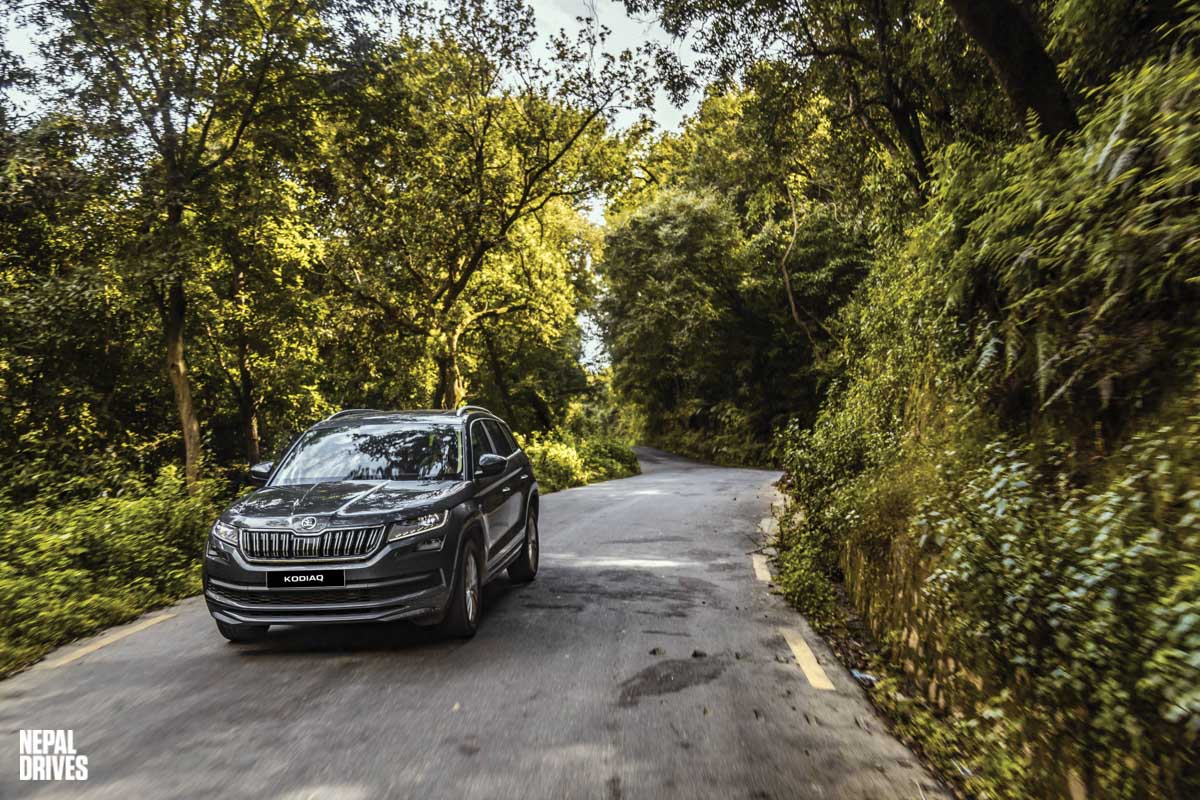 Ride and handling fare better on smoother roads and at higher speeds. You do tend to feel sharper road undulations at lower speeds, but the firmer set suspension makes for fewer body rolls. The stiffness also pays dividends when at higher speeds, allowing the passengers to ride in comfort. Steering is light and relaxed, cornering quickly and with confidence as well as slaloming through traffic with nimble grace. The AWD is continuously working in the background here, and in situations where we pushed the car through a corner quicker than we should have, it pulled us in to maintain the car’s line. 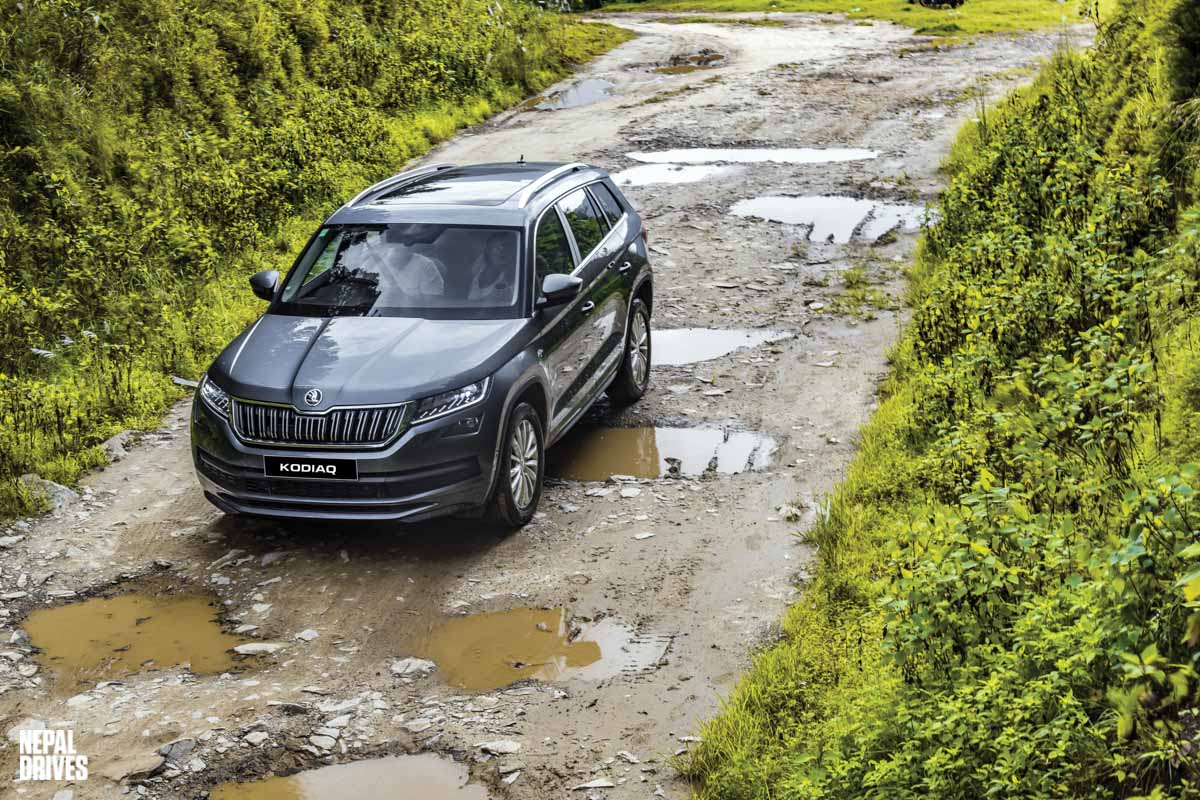 On the off-chance that owners of the SUV do plan on taking the Kodiaq off-road, the Škoda SUV will impress. The AWD system is an electronically controlled multi-plate unit that can send up to 85 percent power to a single wheel. Light off-roading is taken care of with ease, and the 4×4 provides decent traction when the going gets tough.

Let’s Wind This Up And Get To What Is What.

We see the Škoda Kodiaq as a massive stomp by the company into the SUV segment. Škoda has always been clever and premium and their first SUV exudes just that with the Kodiaq. The SUV gets the premium treatment through and through. It’s filled to the brim with features, just what you would expect from Škoda. Based on the short time we spent with the Kodiaq, we can decidedly say that it’s a car you can fall in love with. 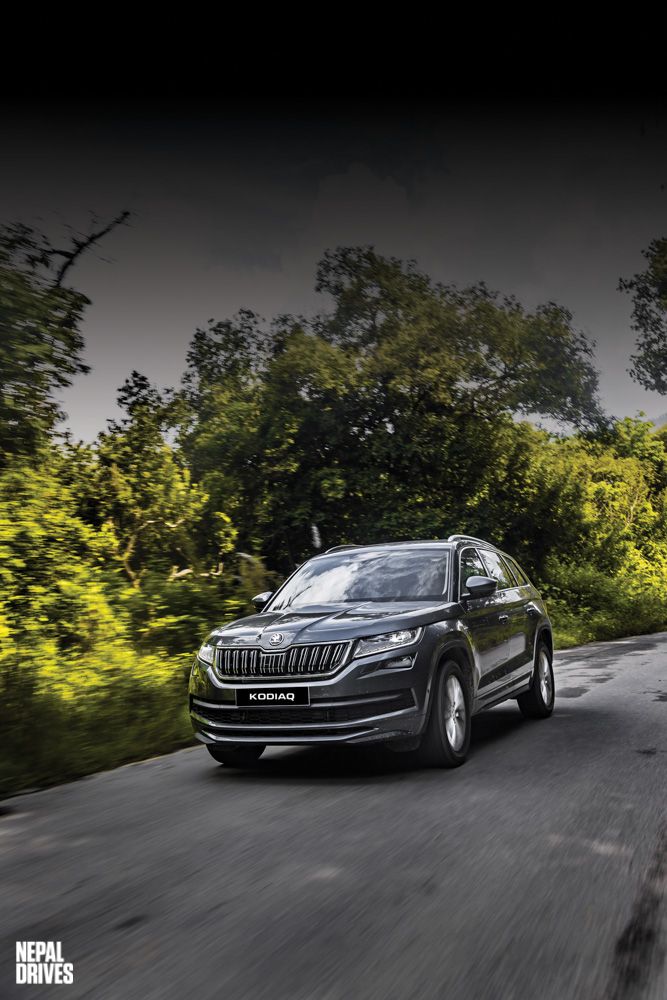 It has the characteristics to serve you as a long-term companion, one that you will not tire of. One that you take out to the roads of Illam and take a moment to pullover, slip into the back seat, recline, lay back and watch the solemn pitter-patter of the rain as you gaze up at the gloomy clouds through the panoramic sunroof.
The only thing in our way is the price tag of Rs. 1,58,00,000 for the highest trim.