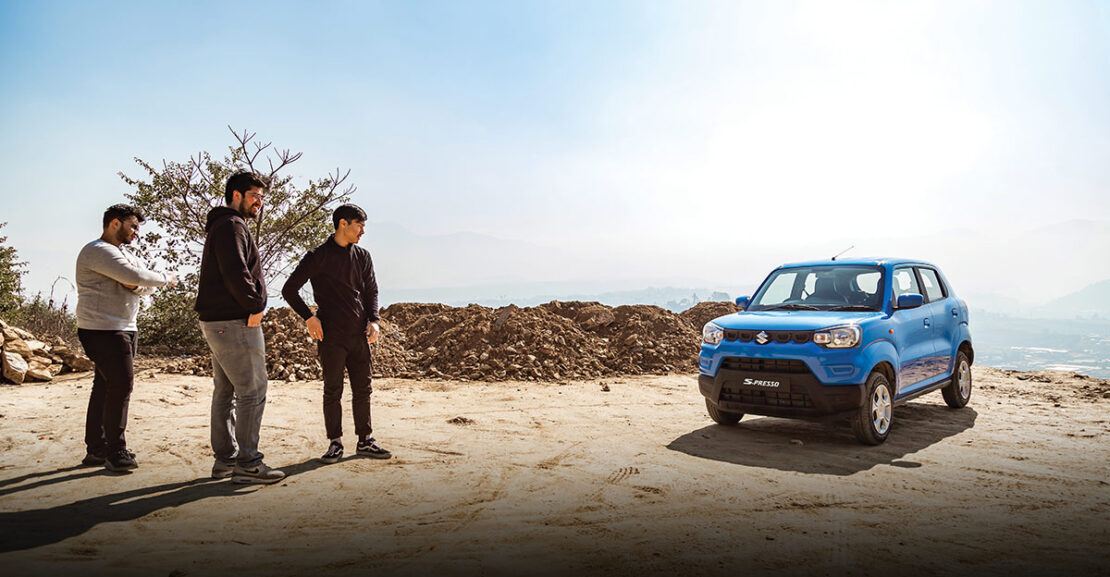 SUVs come in all shapes and sizes these days, veering away from their native big and boxy personality. Depending on how much you earn and how do you fancy spending it, there are a handful of SUVs to choose from at every level. Except one, the entry-level, which is why SUVs have always felt like an upgrade. You hardly ever buy an SUV as your first vehicle, instead, you go for a hatchback or a sedan, drive it for a few years and then consider upgrading.

That is where the Suzuki S-Presso comes in, an entry-level mini SUV from Suzuki for people who want their very own first SUV right from the start. 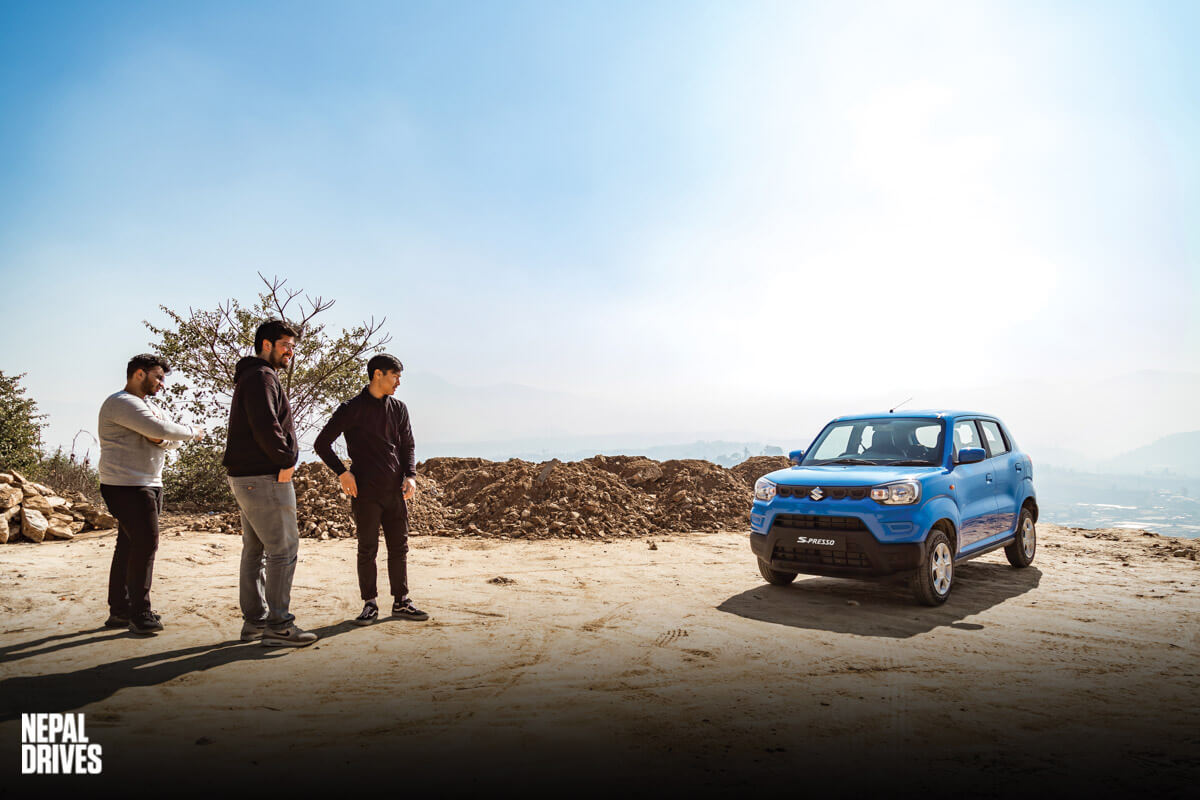 THE S-PRESSO IS WHAT SUZUKI CALLS A MINI SUV…

But does it look like one? Well yes… and no. The car is tall, boxy and features upright pillars and high-set bonnet which are some important credentials for an SUV design. The S-Presso wears chunky cladding on the lower portion of the bumper to add some mass to the design and it has worked to some extent, but we will recommend you pay extra to add more cladding on the car. 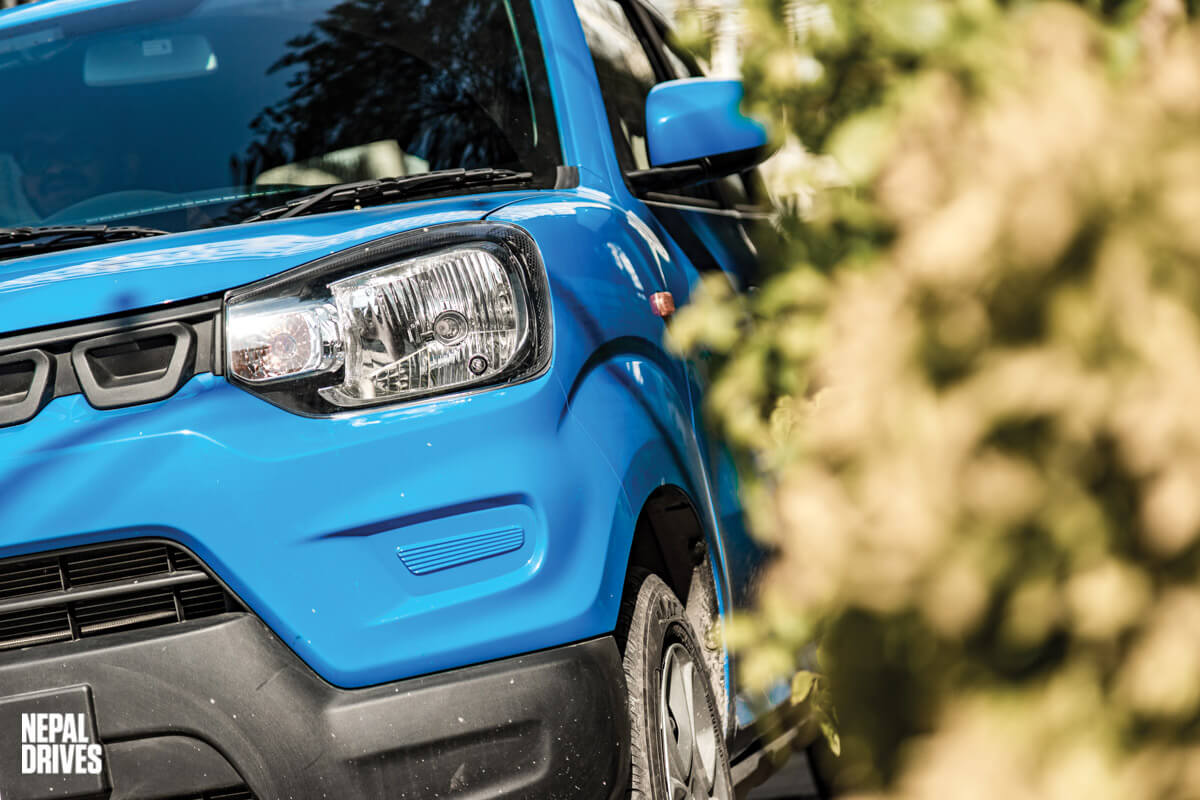 The four-slot grille has a big Suzuki logo in the center and is flanked by angular headlights which make for an appealing fascia. 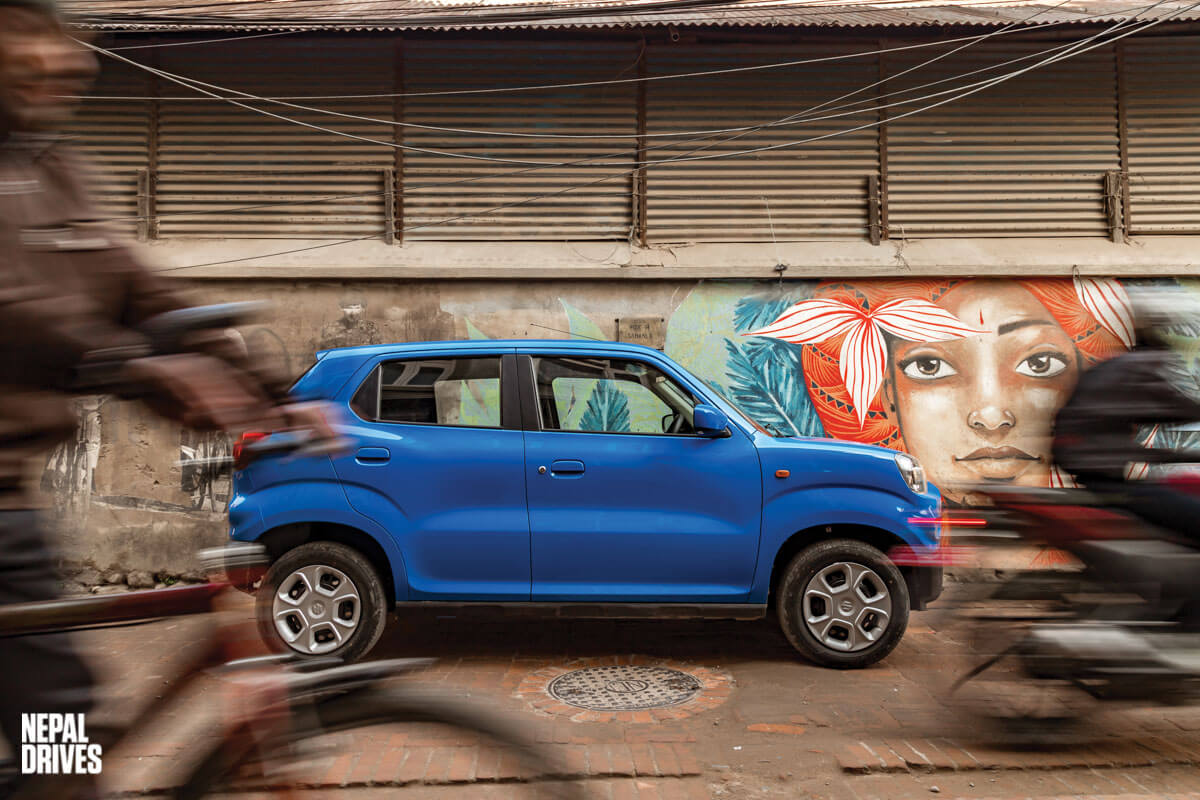 The profile of the S-Presso is simple without looking boring, the height of the car is apparent when viewing from the side except on element that sticks out like a sore thumb which we’ll get to later. 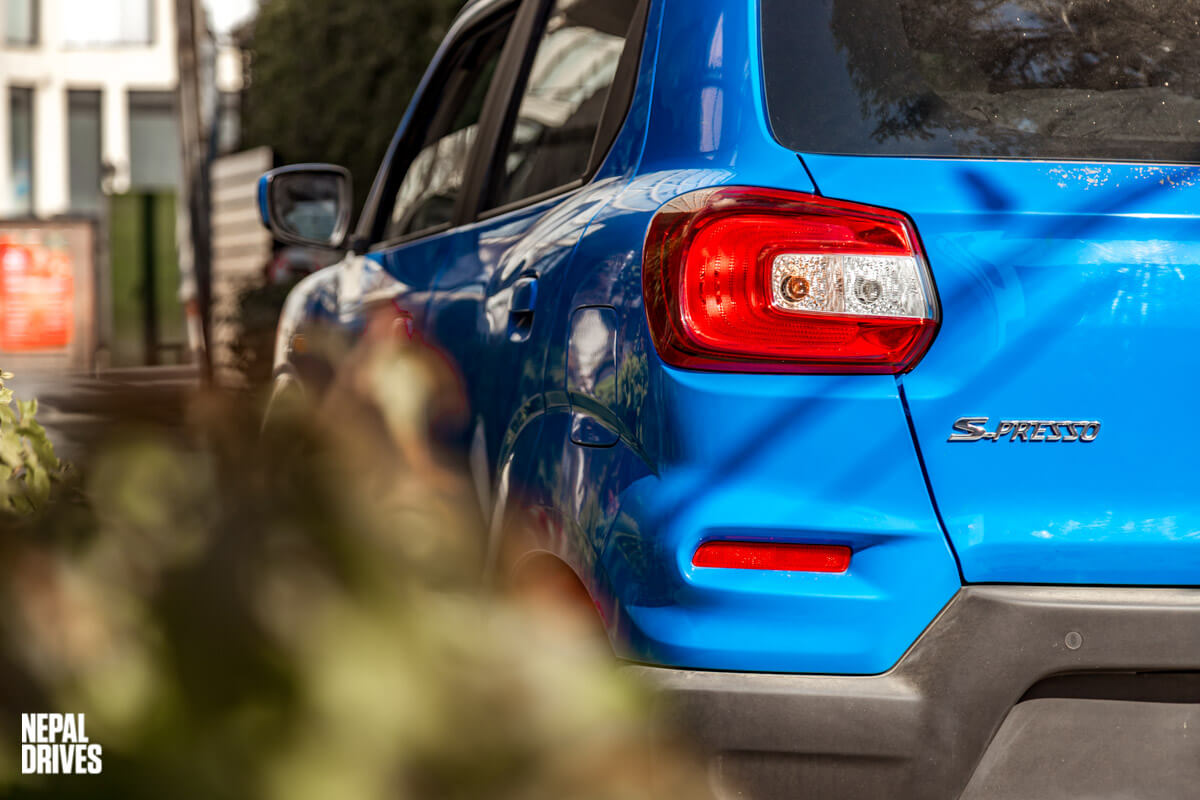 On the rear, the taillights are simple in look but once again, you’ll find plenty of cladding at the rear bumper but we do recommend you again of kitting the S-Presso out with a roof spoiler and skid plates. 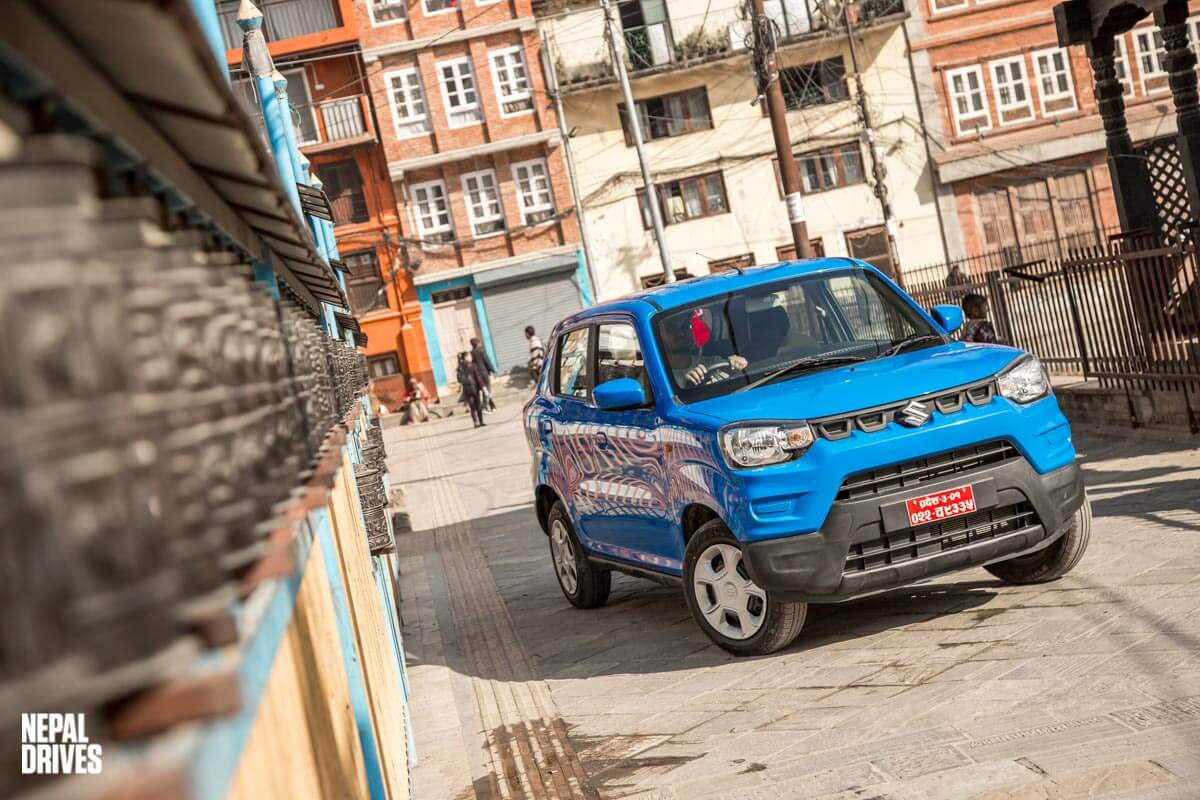 Let’s address the only negative about the S-Presso’s look. The car has been given huge squarish wheel arches with exaggerated height, causing a massive gap between the wheel and the rest of the body. 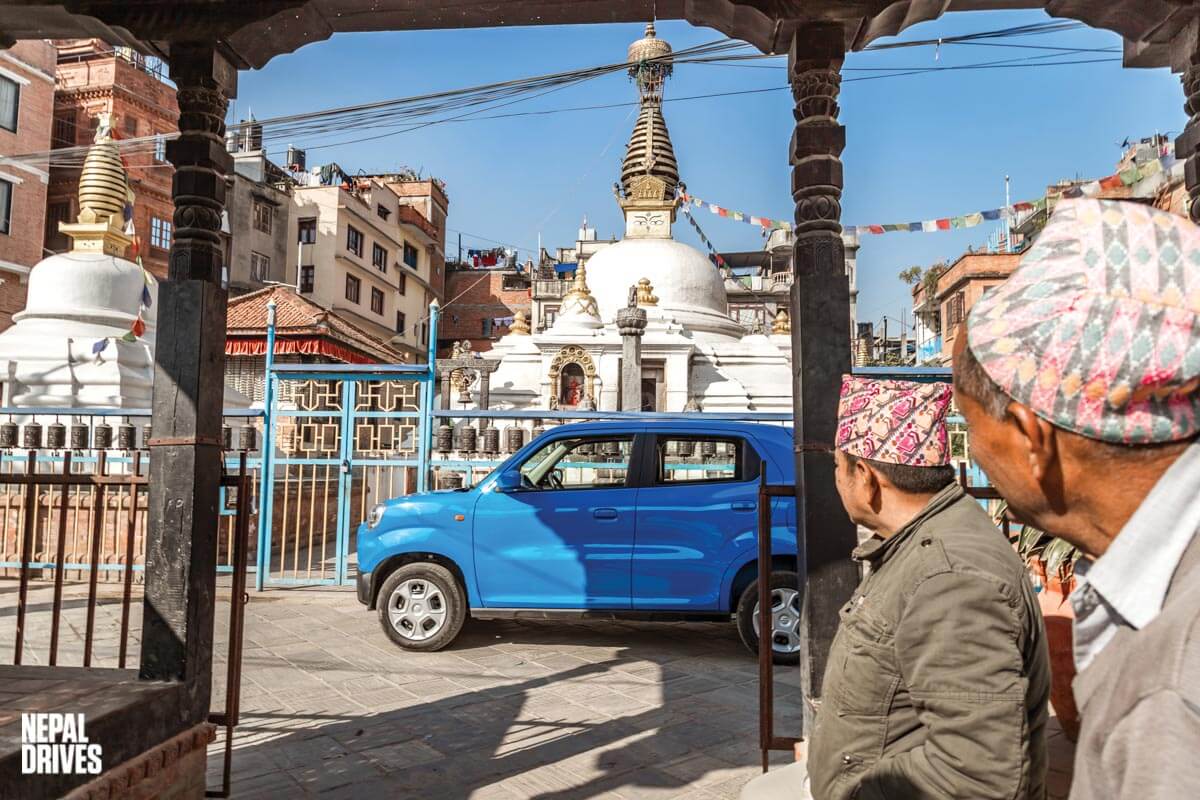 It’s trying to look like an SUV, and yet the square shape makes the already small wheel look much smaller than it actually is. You get 13-inch wheels on the regular car and 14 inches on the VXI+. 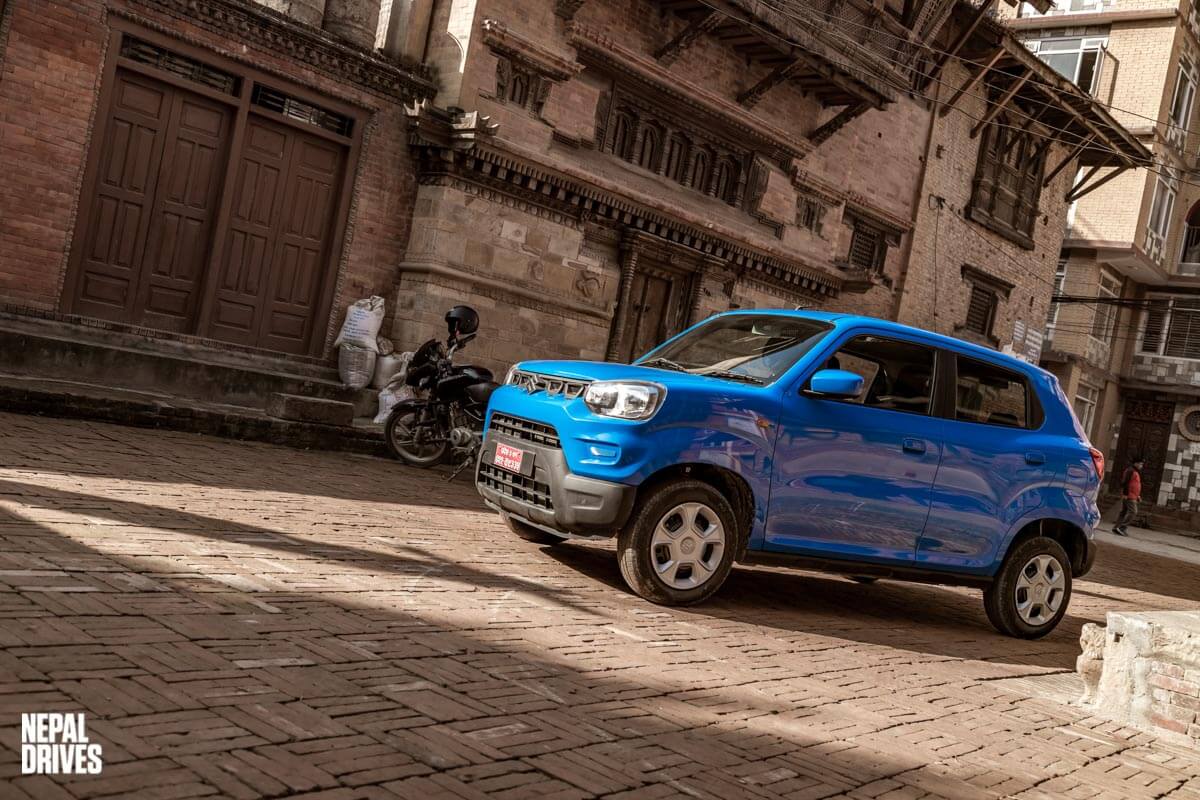 And sadly, no alloy wheels even on the top variant. The wheel well itself is also lacking any cladding, and so looks crude and unfinished. Really the only sore thumb on otherwise a great design pack is the overly small wheels on the S-Presso.

The Suzuki S-Presso comes with a speedometer that doesn’t sit in the conventional position behind the steering wheel which should catch you off guard first, instead it sits at the top of the circular center console that looks like a work-in-progress console taken from the Mini Cooper. The big font of the digital speedometer makes it easy to read but the odometer isn’t quite as legible and there’s no tachometer. 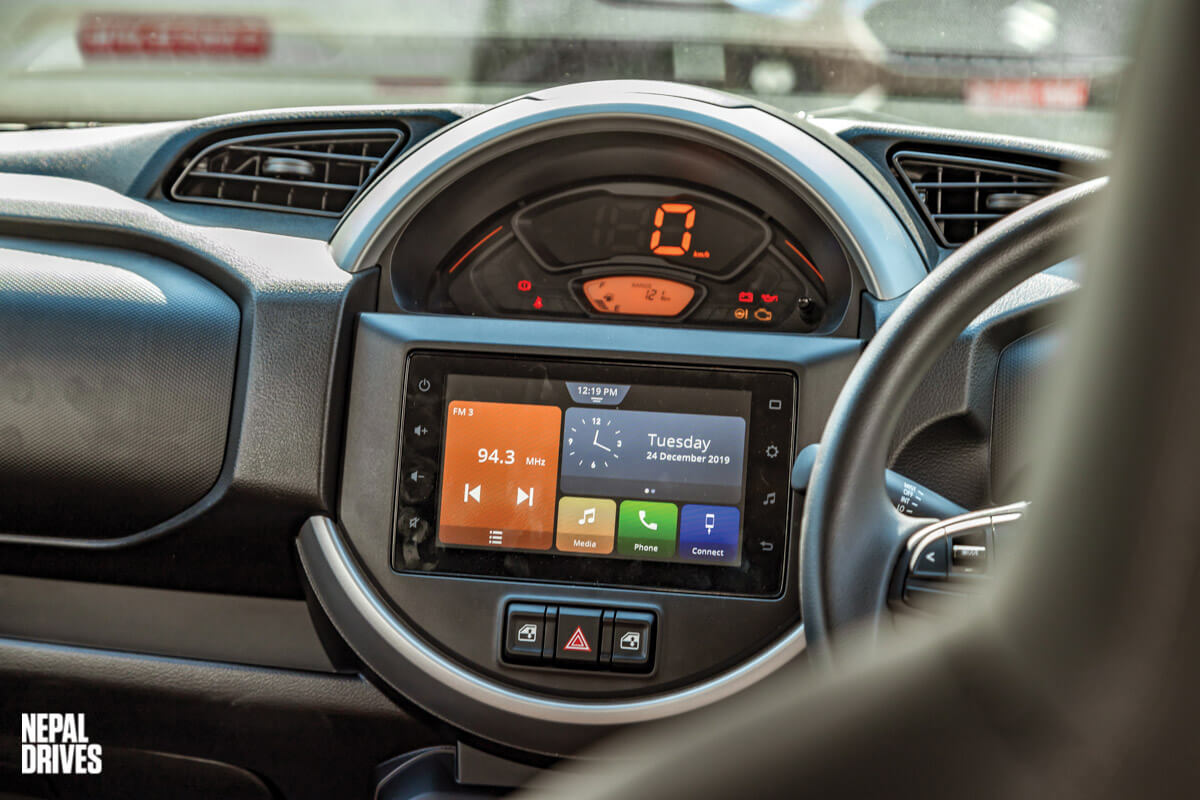 The circular center console is also home to the infotainment system. Top-spec models feature Suzuki’s latest Smart Play Studio unit that houses a 7.0-inch touchscreen unit. The screen is responsive and gets you Android Auto and Apple Car Play. Below the console are the knobs and buttons for the manual AC and heater. 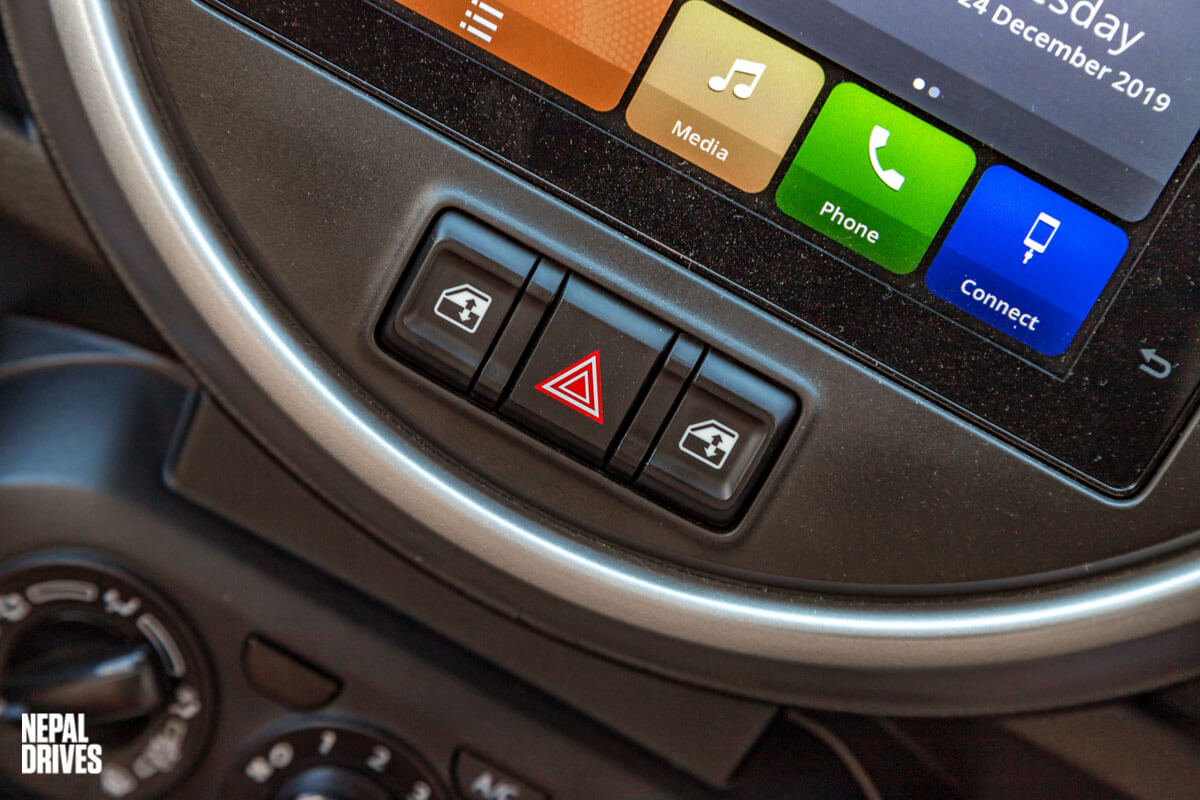 The dashboard looks great and elements like the body-colored decorations around the center console and side air-con vents uplift the look. Cabin quality is also impressive by class standards. The S-Presso’s interior feels airy thanks to the high roof and large glass area that help the impression of space. 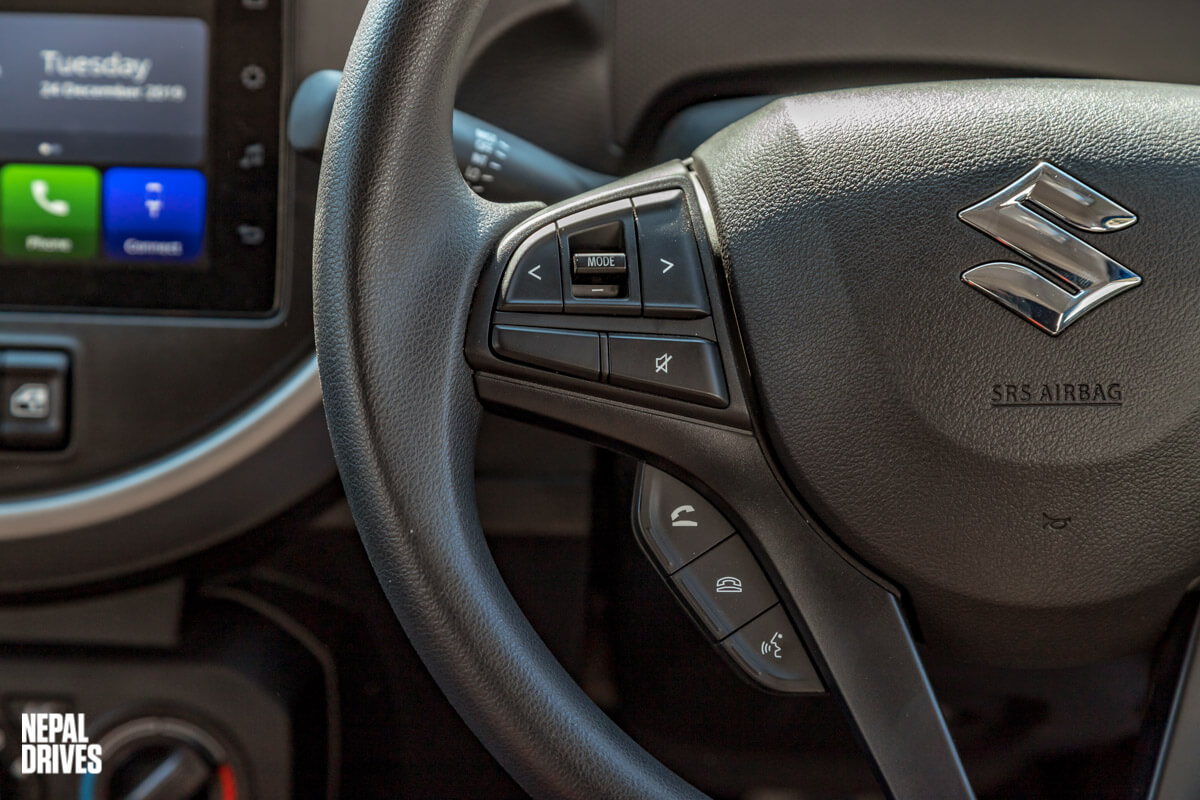 The front seats provide good comfort and those of average height will like the view from the high-set seats. The rear- seat experience is surprisingly good. The flat seat is more supportive than it looks and even 6ft tall occupants will find sufficient headroom and knee room at the back. There’s enough space to tuck your feet under the front seats which also increases comfort. 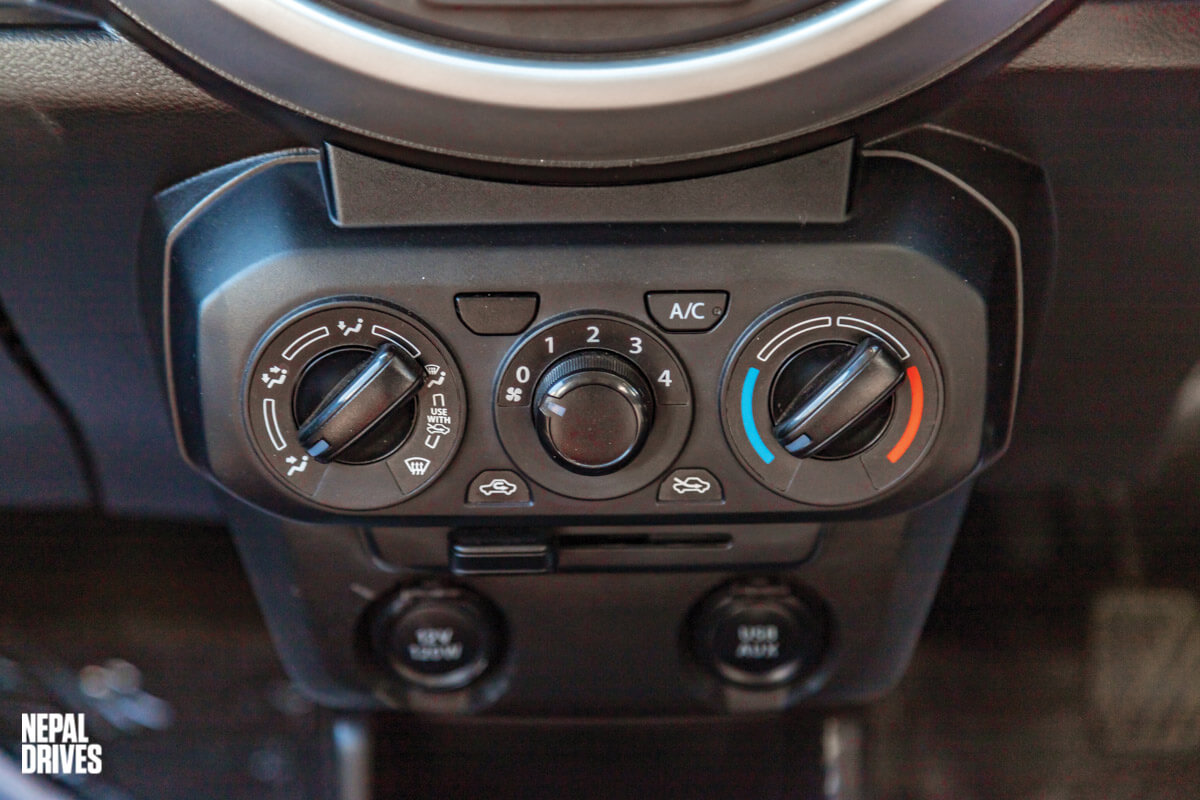 However, the rear works best for two occupants; the cabin isn’t wide enough to seat three abreast in comfort. The S-Presso’s boot is rated at 240-liter capacity but it certainly seems larger than it is. There is plenty of room for luggage and you’ll be quite pleased with how much you can fit into the back. Although, the high lip and low boot floor make loading heavy luggage a bit of a task.

Let’s get to the obvious first, the S-Presso doesn’t drive like a real SUV but we weren’t expecting it to in the first place.

The wheels are small and the ground clearance and power aren’t nearly enough to take the S-Presso off-roading, the most SUV thing you’ll be doing on the S-Presso is overcoming bumps and potholes inside the city. But does it at least give you the feeling of an SUV? 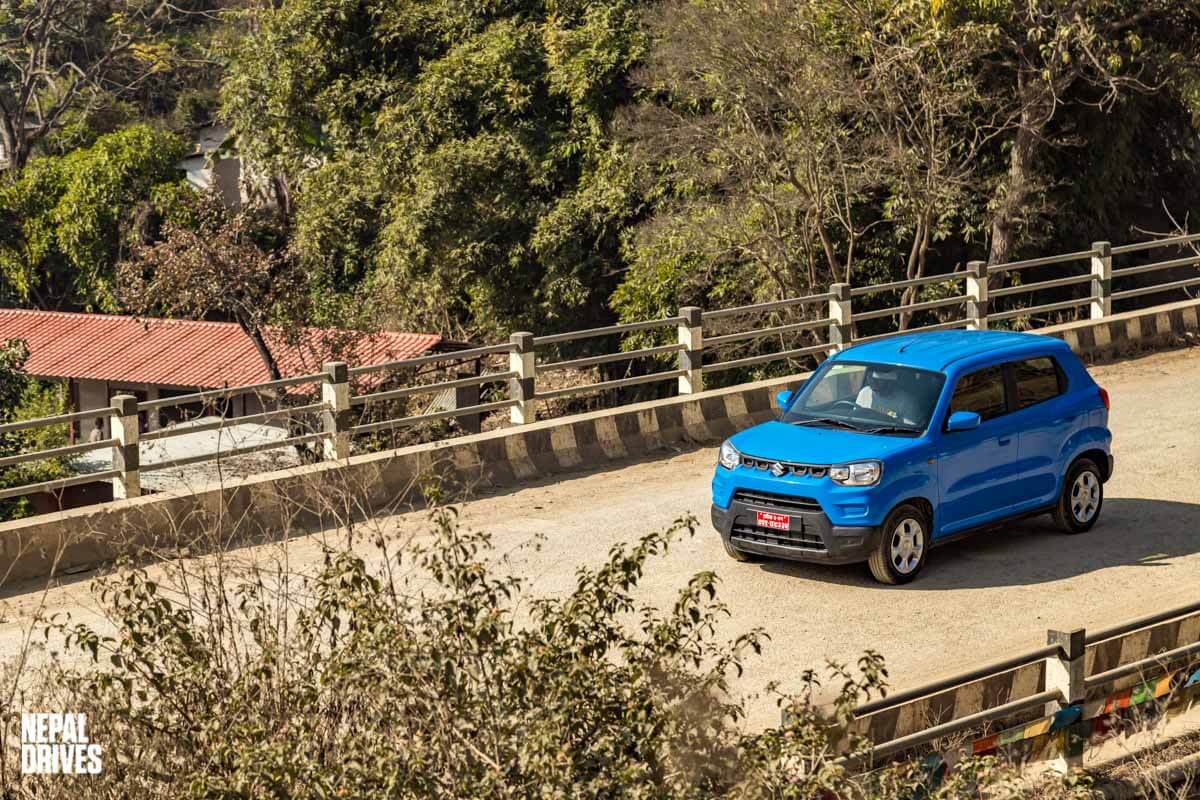 A resounding yes… The seating position on the S-Presso mimics a full-size SUV, you sit high up with a wide view of the road. You can see the entire bonnet of the car clearly from end to end which eliminates the guesswork maneuvering that’s evident in a sedan or a hatchback and makes navigating the S-Presso in even the narrowest gullies of the city an absolute breeze. 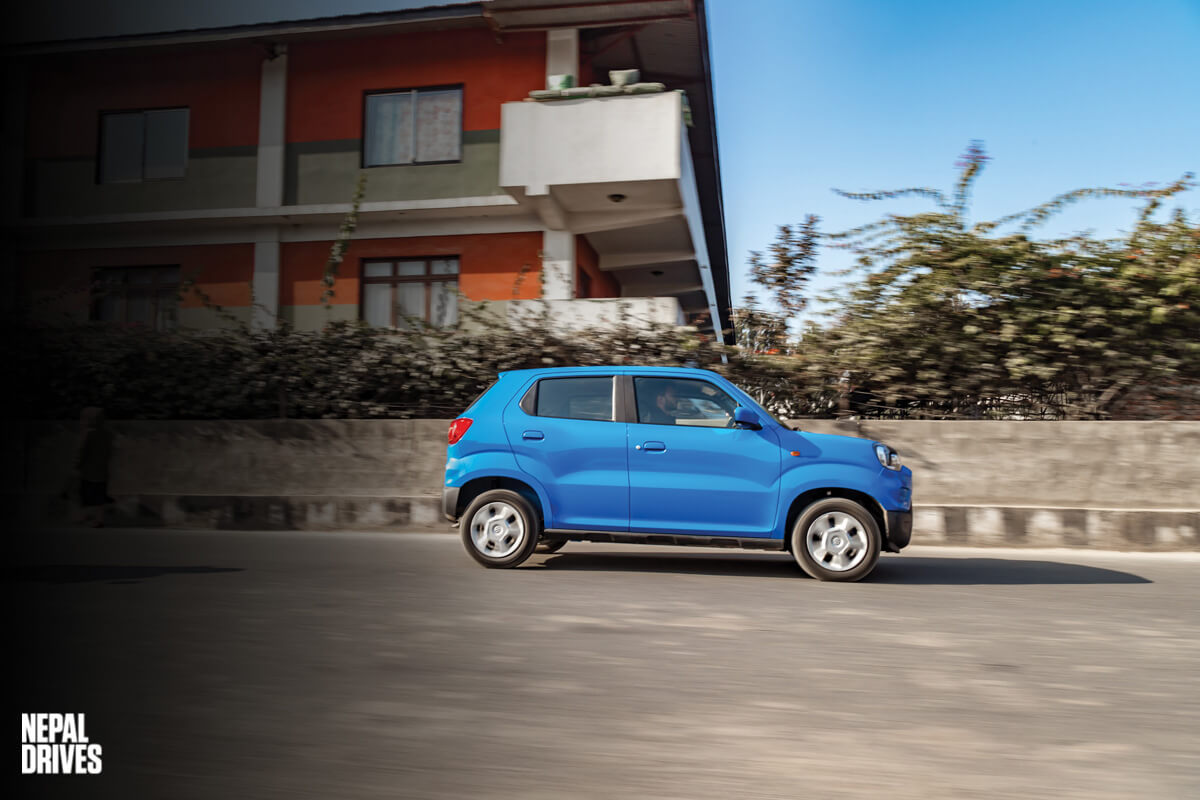 Due to this fact alone, the Suzuki S-Presso is an instant recommendation for new drivers because we know how difficult it is to drive a car when you’re still in that beginner stage.

New drivers will feel covered in a blanket of confidence behind the steering wheel of the S-Presso encouraging them to drive without the risk of unknowingly scraping their car while handling tight turns. 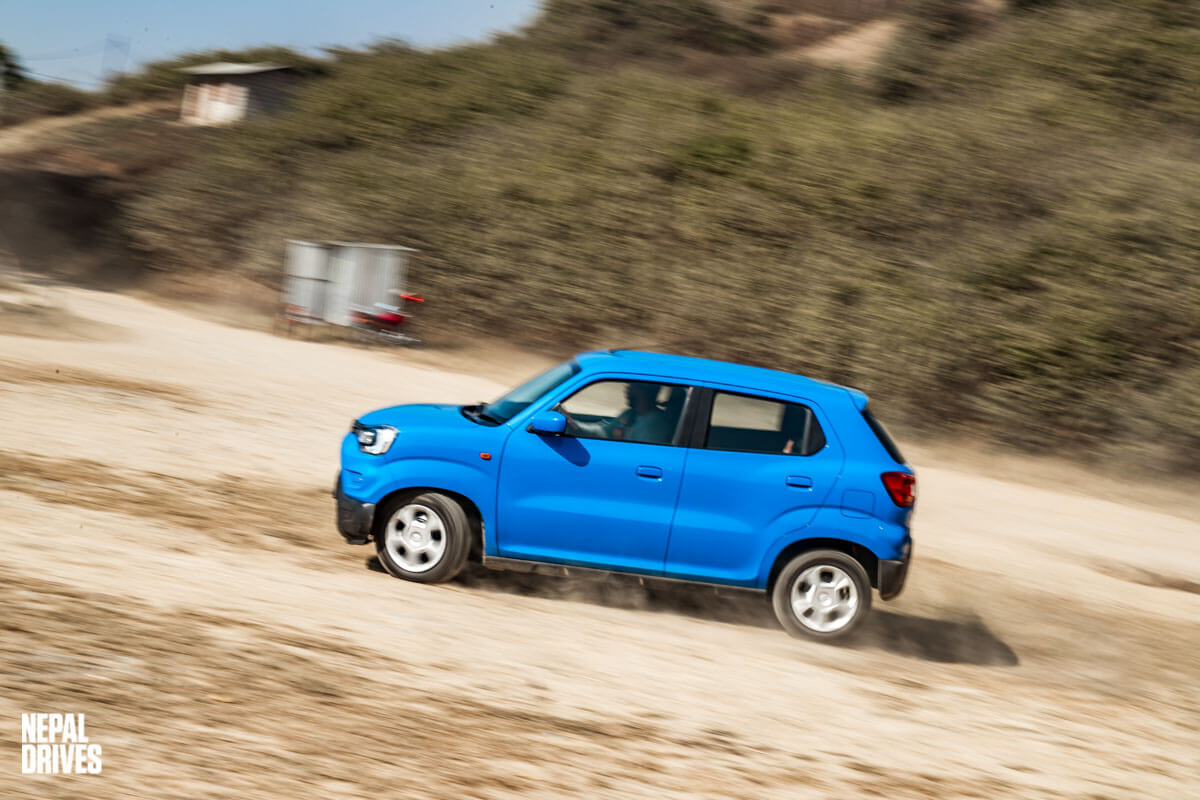 The light and responsive steering offers a tight turning circle and does what it’s told and you will easily be able to negotiate the S-Presso through the messy roads with utmost comfort. 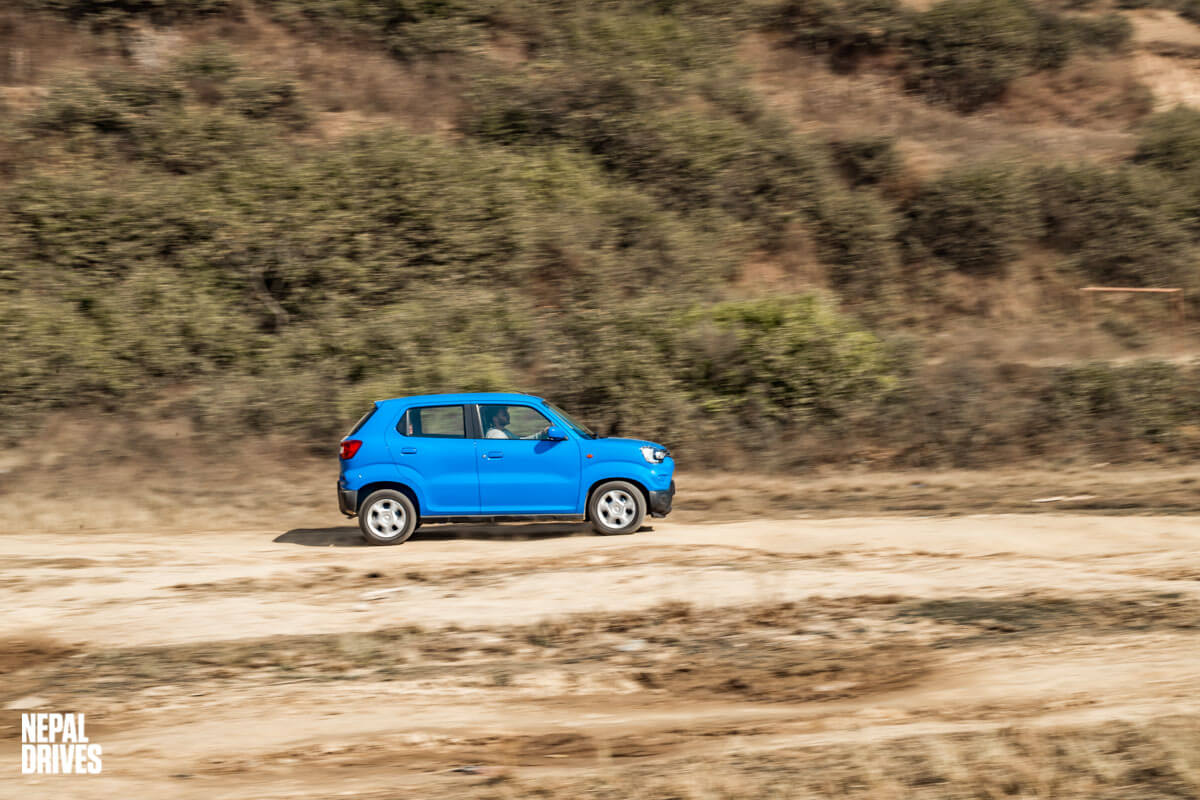 The S-Presso is 180mm off the ground which should be enough to drive through the undulations on the tarmac without the fear of scraping the underside of the car. Plus, the suspension does an amazing job of absorbing the bumps cushioning you at all times. 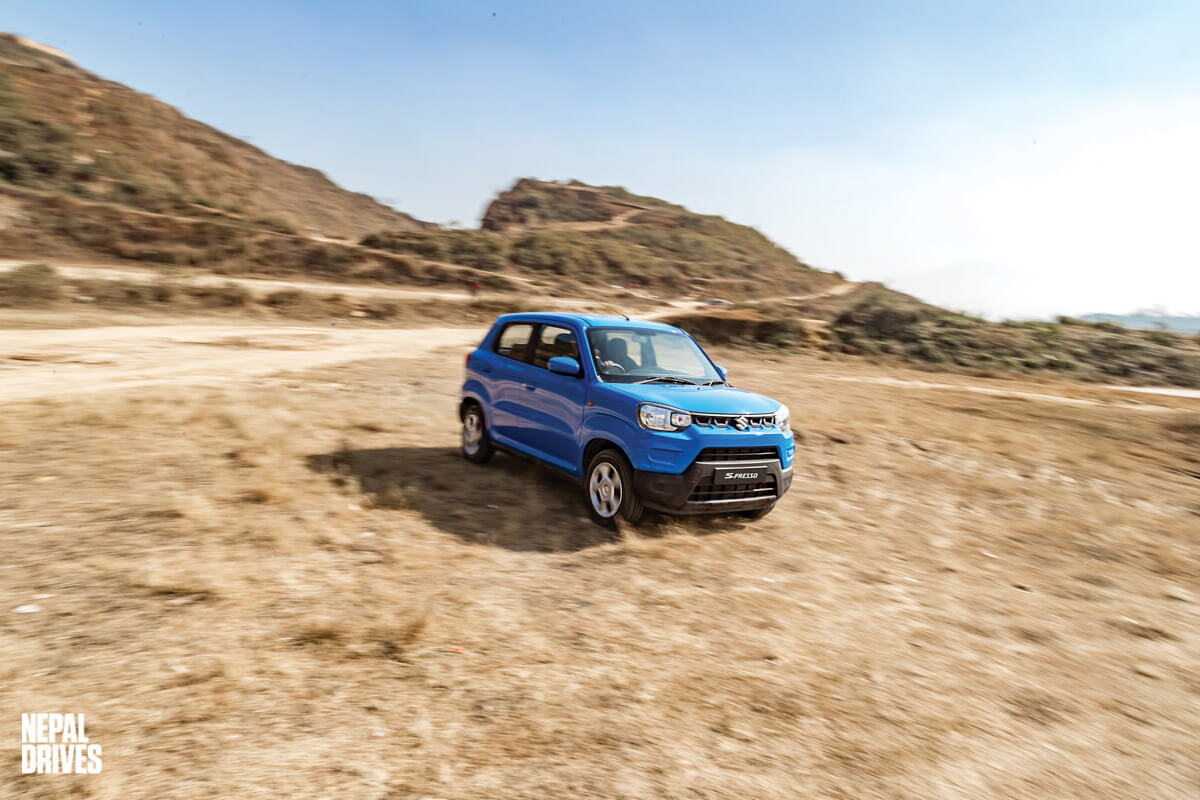 The S-Presso is powered by a 1.0-liter, three-cylinder petrol engine mated to a 5-speed manual transmission that makes 68hp and 90Nm of torque which by no means is an SUV standard but is more enough for the inner-city commute. The K10 engine was already refined, to begin with, and the hardware upgrades required for BS6 emission norms have made this little oil burner run quieter with the idle being almost silent. 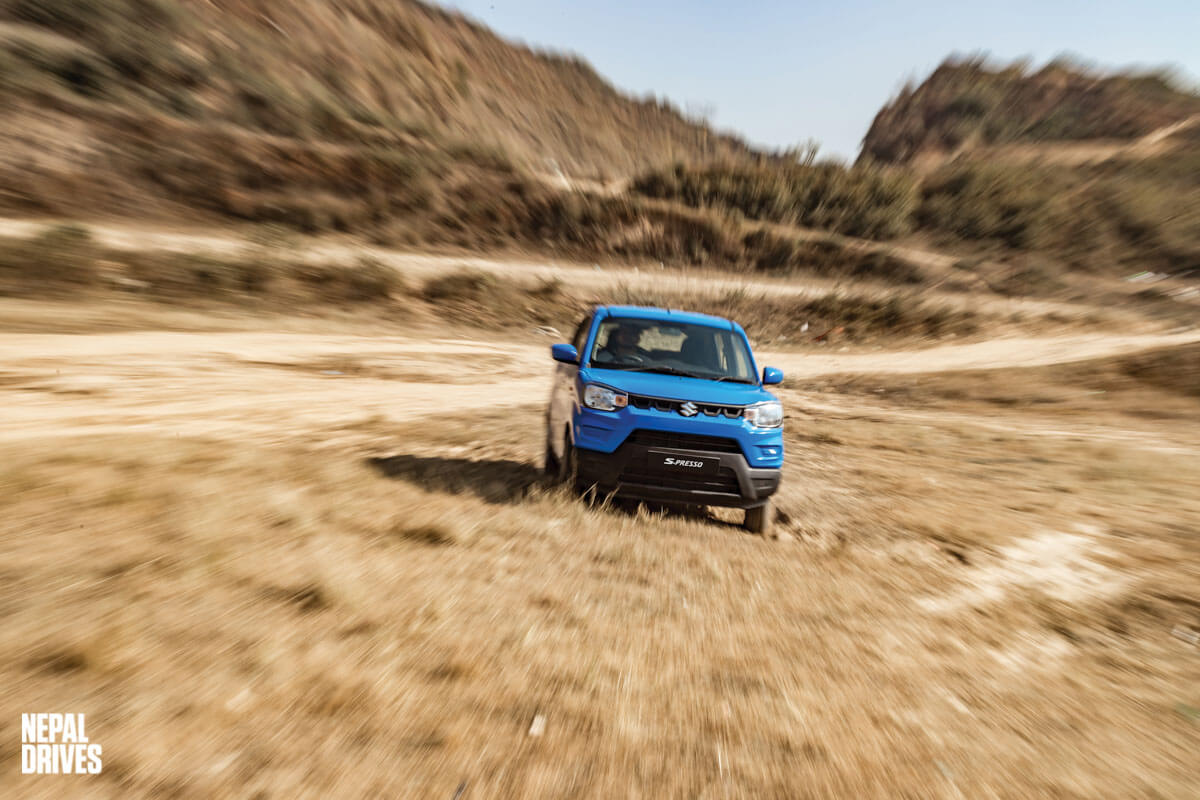 Power delivery is smooth and the engine pulls cleanly even from a lower rev range. However, be ready to drop a gear and mash the gas if you’re aiming for a quick overtake on the highways.

And you’d be right, it drives on awfully small tires, it isn’t as practical as an original SUV, it doesn’t have any on-road or off-road performance like an SUV… Certainly doesn’t have a 4WD system as a proper SUV should. 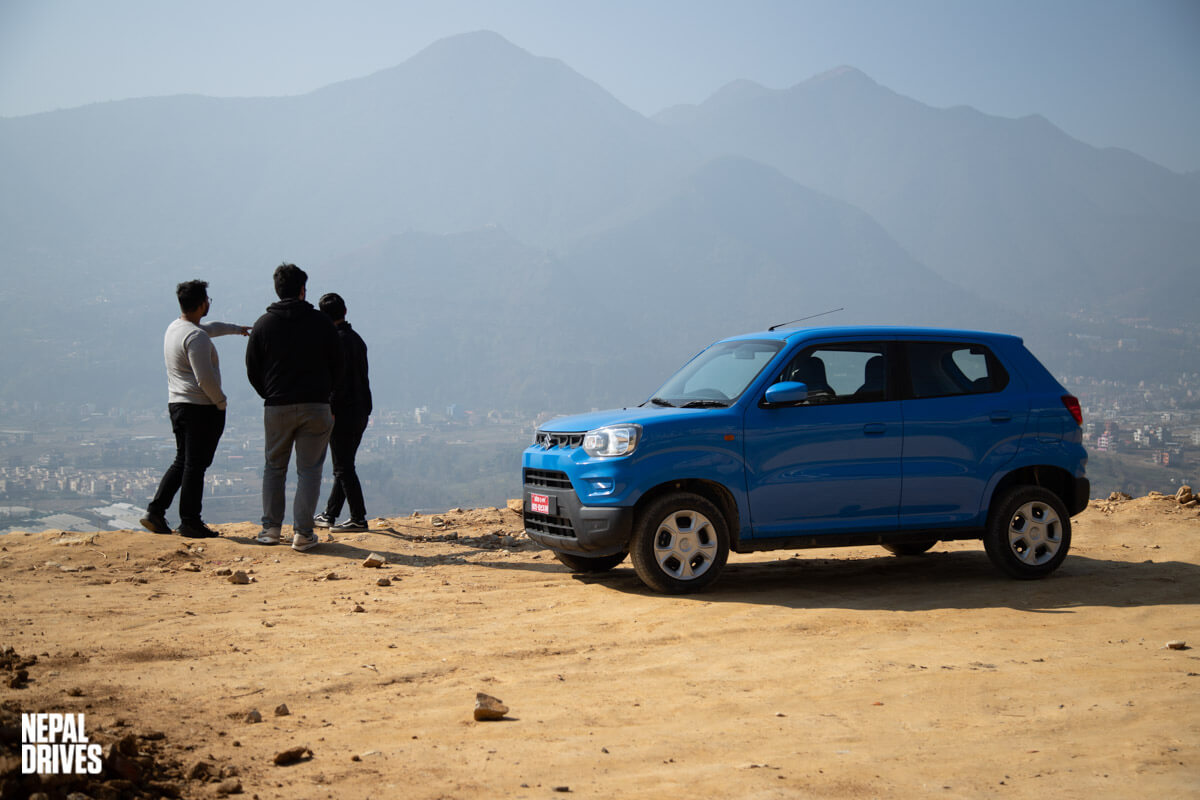 But as a means of making you feel like sitting behind an SUV and providing that commanding feel while on the road, and giving you an SUV experience that starts at just Rs. 22.99 lakhs, Suzuki seems to have hit the nail squarely on the target with the S-Presso and is an excellent choice for people looking to get their very first SUV.