The Legacy of the Suzuki Swift | Test Drive, Review

Mediocrity is dangerous, it’s everywhere and it’s contagious. It creeps like a dark shadow, infecting everything in its path. And the trouble with mediocrity is that you have to work hard to fight it. However, those who are able to strip themselves free from the grips of the mundane are the ones that rise above and stand out from the rest.

This attitude towards mediocrity was what spurred the Suzuki Swift to become, what is arguably, the most popular hatchback to enter the Indian and Nepalese market. With a product lifespan of more than 10 years, the Swift has now come with the third generation. We will get into that in a minute. But first, let us look back at how it all began. 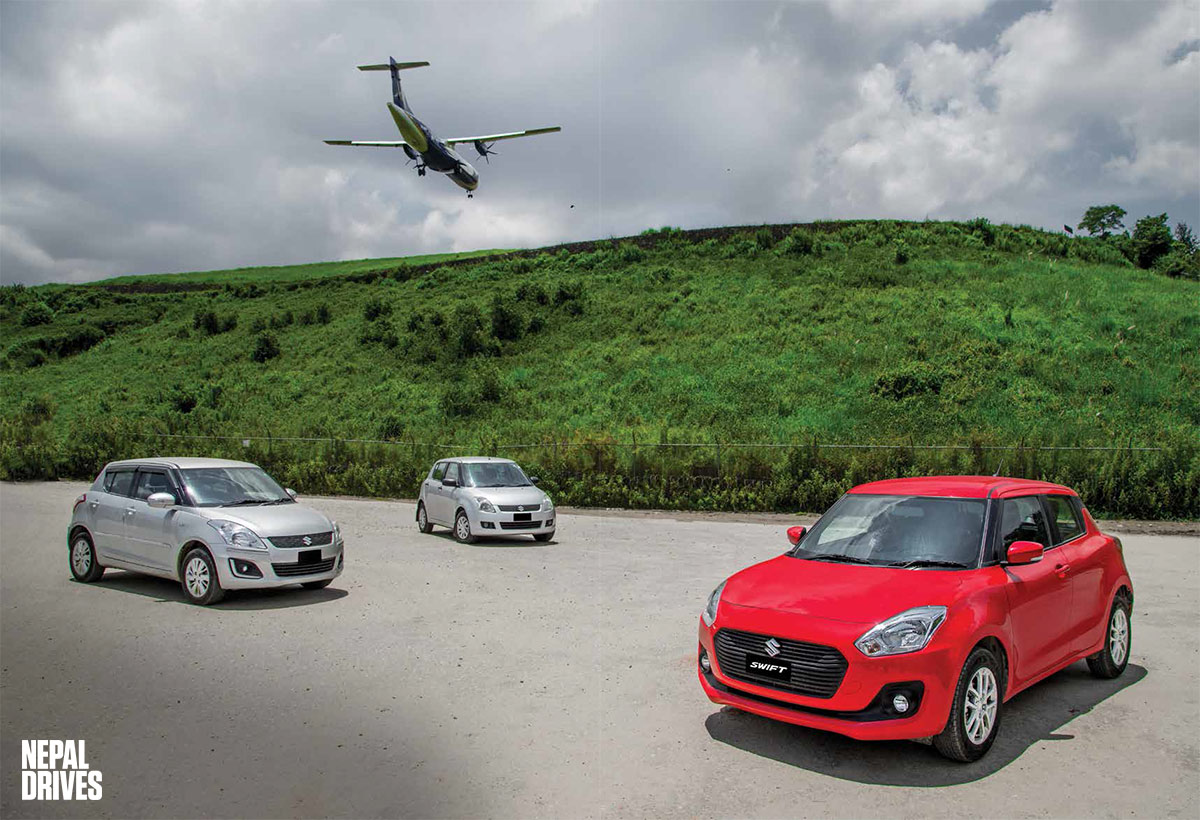 For the average Nepali family, hatchbacks have always been the sensible choice for their first car. In this way, hatchbacks played an instrumental role in helping more houses have cars parked in their garages. However, for the longest of times, hatchbacks just barely qualified as family cars. Sure, it fits a family of four, provided sheltered transport in the rain, and more safety than motorcycles; but it was usually targeted towards providing the bare essentials that one would look for in a car.

Enter the Suzuki Swift: a car that found the perfect balance between practicality and fun. In essence, it introduced the idea of a hatchback that was NOT just an entry level car. It gave way to the age of premium hatchbacks: a convenient package of quality, fun, style and practicality.

More than a decade has passed since then. Today, two Swift generations later, we have been served the third iteration. More modern, more stylish, lighter and with the responsibility of upholding the strong legacy of the Swift moniker, the third generation Suzuki Swift has its work cut out.

When the first generation Swift came into the picture, its unique silhouette struck the right chord with the masses and it became an instant hit along with the rounded features and near vertical headlights. Long story short, the Suzuki sold like hotcakes. Now, the job at hand for Suzuki was to replace a bestseller, which is rarely an easy task. Change things too much and you run the risk of getting a lot of heat from loyal customers. Stick to the same recipe and the product will inevitably stagnate. 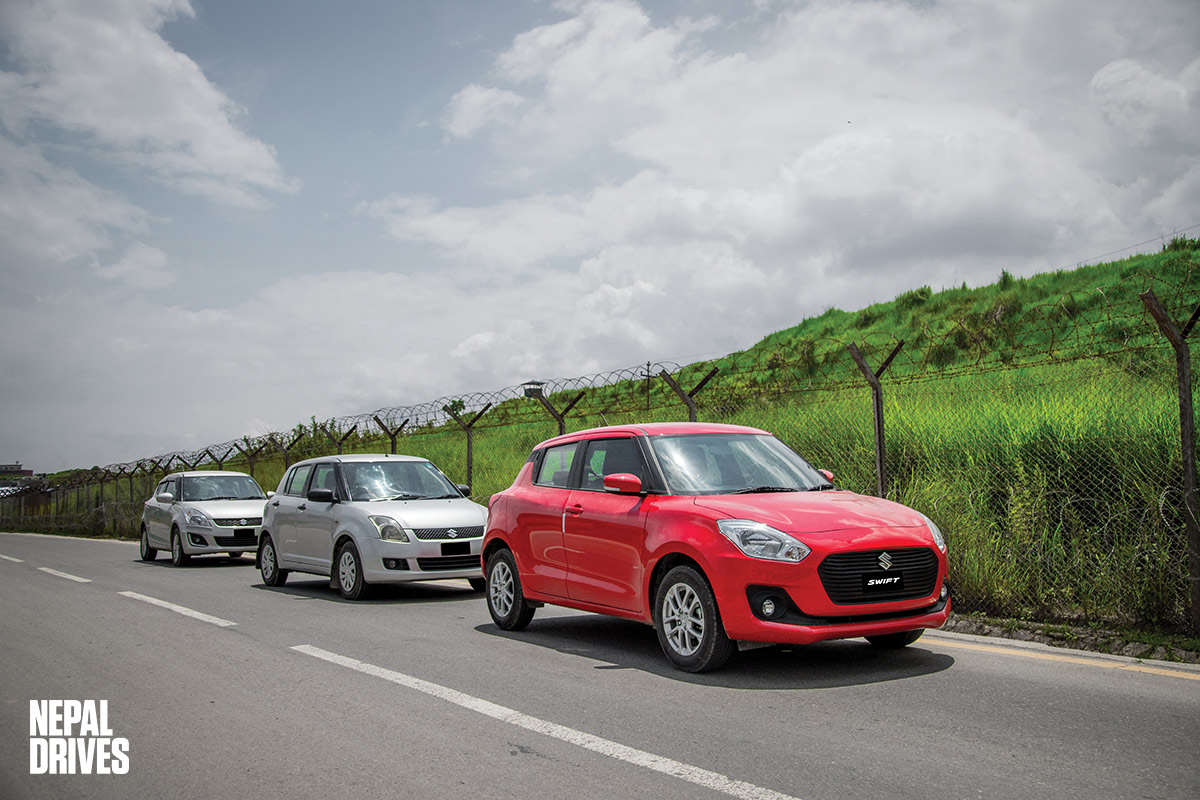 Suzuki handled the situation with commendable composure. The third generation Swift has retained the essence of the predecessors but managed to bring a much-needed modern twist to the entire package. It has shed a few curvy bits and put on muscle in all the right places for a more toned physique. The LED lamps on the top spec model give it an air of sophistication, but the hexagonal grille replacing the trademark moustache design brings out the sportier side of the Swift. 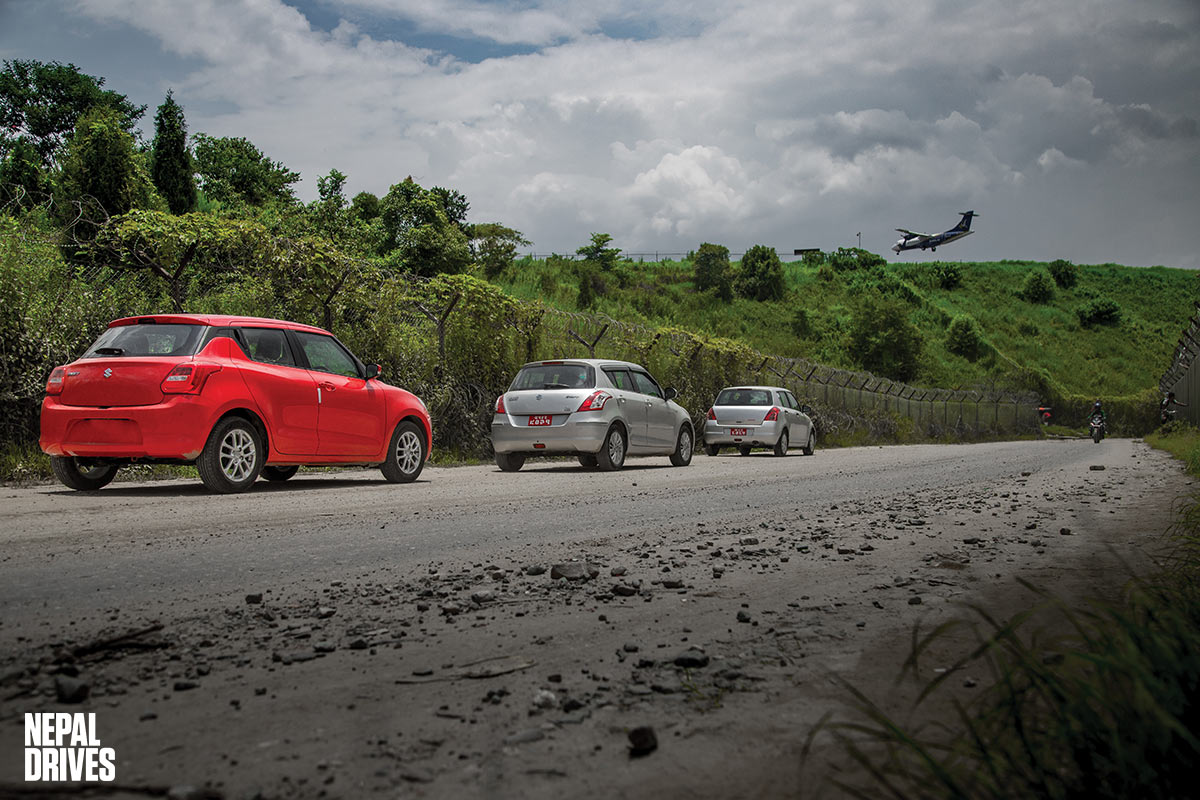 The floating roof design is a spectacular design feature, one, which we think, would be further prominent with a contrasting roof colour. Rear door handles have been integrated into the C-pillars, the correct terminology for “the black area near the window”. This clever concealment does give the Swift a significantly different appearance, one that will be a signature feature of the Suzuki Swift.

Major upgrades on the interiors elevate the appeal of the new Swift. Black is the new black, and it is the dominant colour palate for the sporty interiors. Using a different hue might have made it appear more spacious than it is, but we are not complaining.

One of the best things about all the Swifts till date was their effort to provide the best equipment available in any car from the humble hatchback segment. The original Swift boasted of double-DIN audio unit compatibility, while the second-generation car was one of the first to properly integrate iPod compatibility – which in 2011 was difficult to find even on some of the luxury cars out there. Keeping to this trend the new Swift has kept pace with the latest gadgets and even brought equipment like airbags, anti-lock brakes, ISOFIX child mounts, USB ports, powered windows, powered mirrors, ORVM mounted turn blinkers etc. that set benchmarks in the segment. 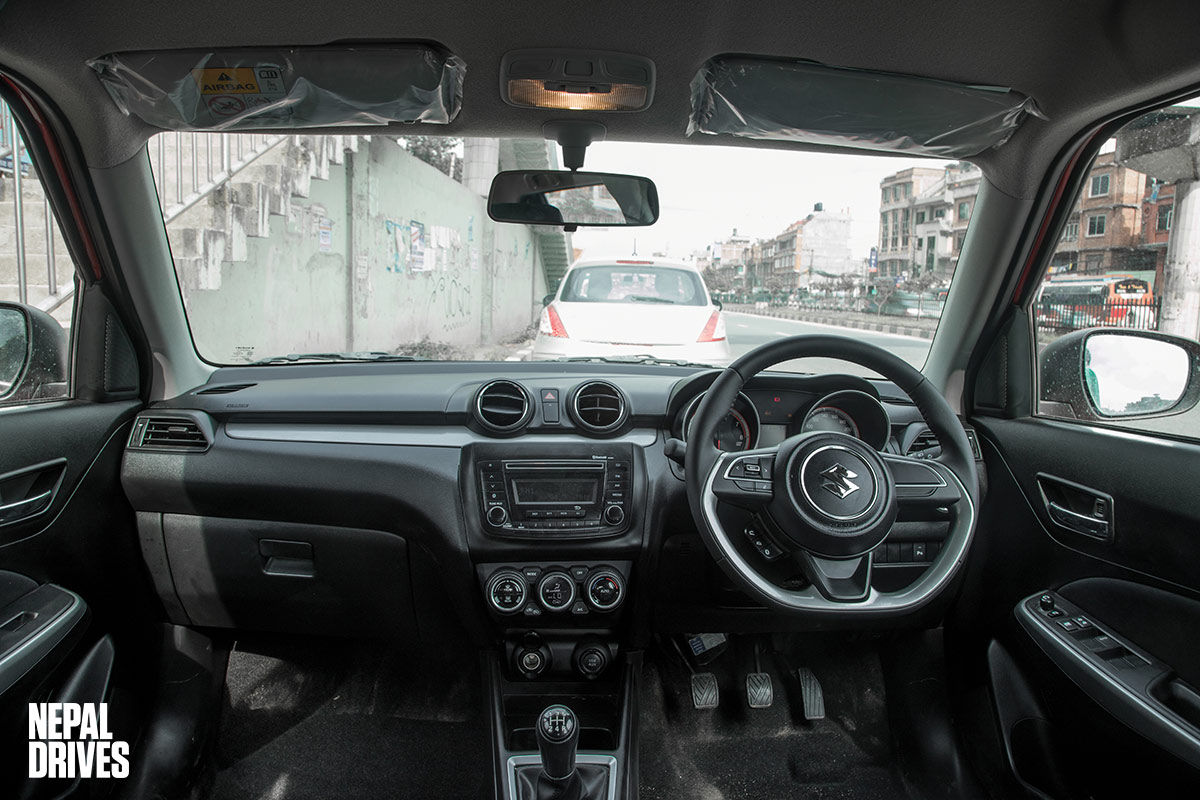 You can comfortably seat 4 passengers, excluding the driver, without much trouble. Getting into the rear seats is done via the aforementioned concealed C-pillar door handles. But it has to be said, with a handful of heavy grocery bags, it can be slightly difficult to reach the handles.

Which brings us to the solution, and another improvement of the new Suzuki Swift: the increased boot space. The 268-litre boot is a substantial 64 litres larger than the old Swift’s and there’s also the option to fold the 60:40 split rear-seat backrest forward to make more room.

The people at Suzuki have been constantly telling anyone who’ll listen about their new ‘Heartect’ platform, which is the secret behind the impressive weight loss of the new Swift. Shedding a staggering 110kg compared to its previous model, the heaviest of the petrol variants just inch past the 880kg mark. Even the diesel variants manage to squeeze under the one-tonne mark.

The massive weight loss has resulted in a much sportier and agile performance from the spirited Swift. This is a quick little machine that is a joy to drive.

Powered by a 1.2-litre, four-cylinder petrol engine, the Swift makes about the same power as it did on the older model (83hp and 113Nm versus 84hp and 115Nm on the last Swift). However, the weight loss has injected more life to the driving experience, generating more smiles per kilometer. 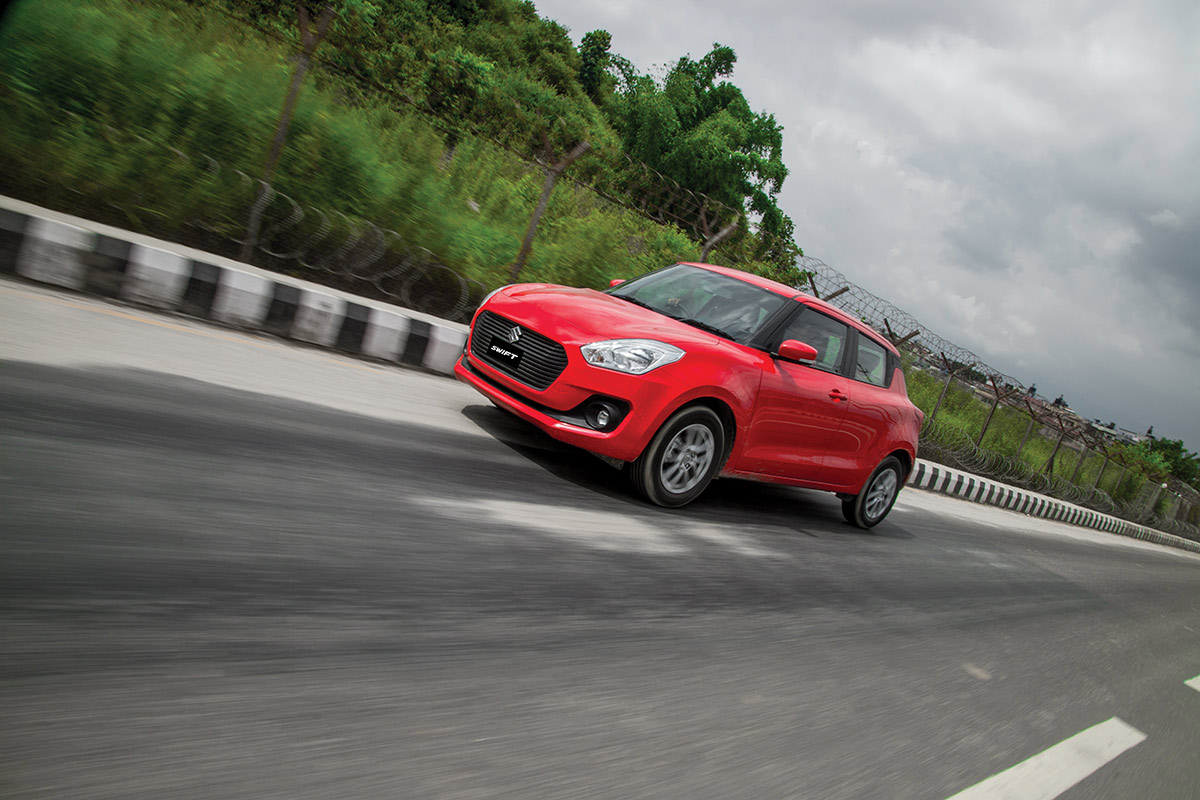 There is considerably more pep in the car and you’ll notice it the moment it happily sprints to the command of your right foot. The light clutch and slick 5-speed manual gearbox make matters even more exciting. For a 1.2 litre engine, the performance is impressive. The suspension setup is fabulous and it does a tremendous job of soaking up minor bumps on the roads.

We would have loved to have more feedback from the steering though; it would have been icing on the cake for a car that seems otherwise eager to take on the curves. The electric steering somehow takes a little away from the fun sporty nature that the previous Swifts epitomized.

The Suzuki Swift is what we call a game-changer, and it’s always been one. It changed the way people perceived hatchbacks by elevating the segment’s perception from one of mediocrity to that of excitement and fun. 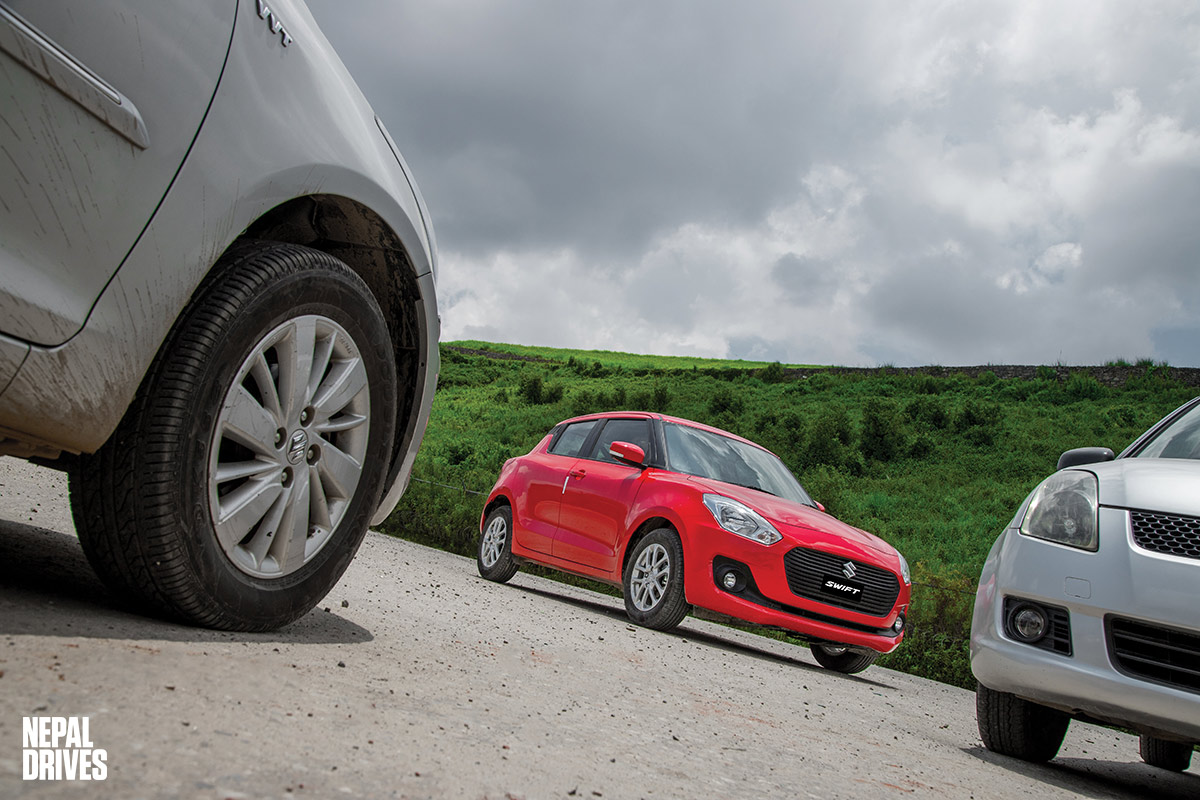 What really sets the swift apart is that it’s great to drive. It’s a well-engineered machine and the facelift makes it even more appealing. The new-gen Swift certainly knows how to make its presence felt through its lively overall dynamics. The brilliant little hatchback appeals to both who desire unmatched driving experience and roomy interiors. And that’s a combination that is difficult to replicate. Kudos, Suzuki; you’ve done it again. 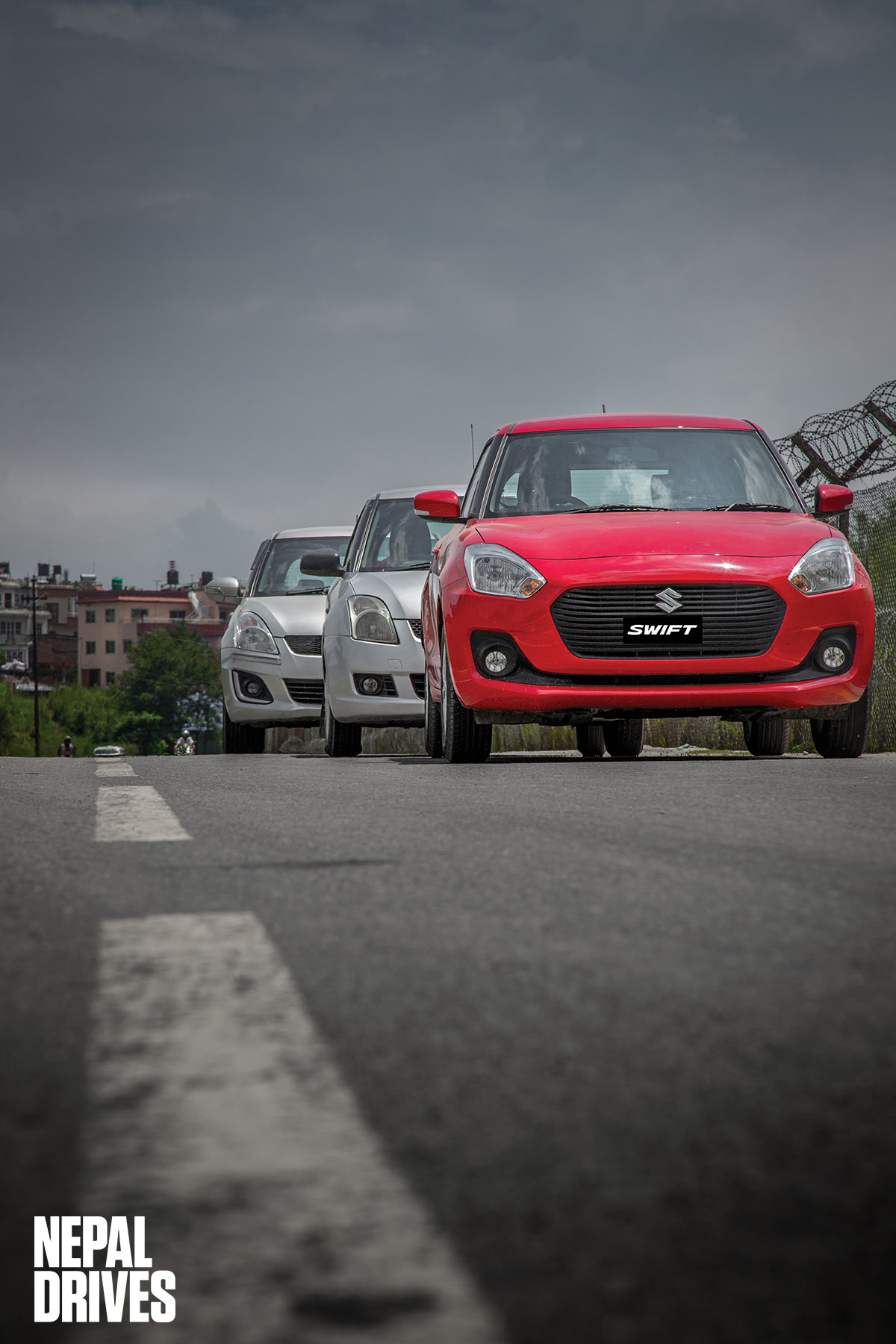 We would like to thank Kathmandu Automobiles Center for providing us with previous generation Swifts. If you are searching for a used car, you can contact them at 01-4420555, Tangal, Kathmandu

NEXT 13 Aug 2018
Renault Captur: The Captivating One | Test Drive, Review