Gloomy clouds blanketed the morning skies of Kathmandu and the last of the bitter cold showers had begun, ushering the end of winter. As the heavens opened up further the gentle taps on the windows soon changed to the constant pitter-patter of the rain. Puddles began plinking as the rains became heavier. Sheltered under a rickety old canopy stood the Yamaha R15 V3. Besides, it stood eight-year-old Sameer, draped in layers of clothes with a grin across his face, and a gleam in his eyes. While the rain continued drumming against the roof of the shed, something spectacular was happening underneath. Sameer was encountering a new fascination, one that would spur a lifelong, undying love for motorcycles. How do we know? Because we remember having that very same gleam and grin when we first fell in love with the Yamaha R15 V1.

That was 10 years ago when the first version of the R15 enraptured an entire generation. For many, it was the Firestarter that got them into motorcycles. A fully faired motorcycle with a sports bike appeal and class-leading performance at an affordable price tag; it was the ultimate entry-level sportbike that spawned a cult following and garnered a huge fan base. 2019 brings the replacement of the second version of the Yamaha R 15 with newer styling, improved performance, and more tech-savvy. 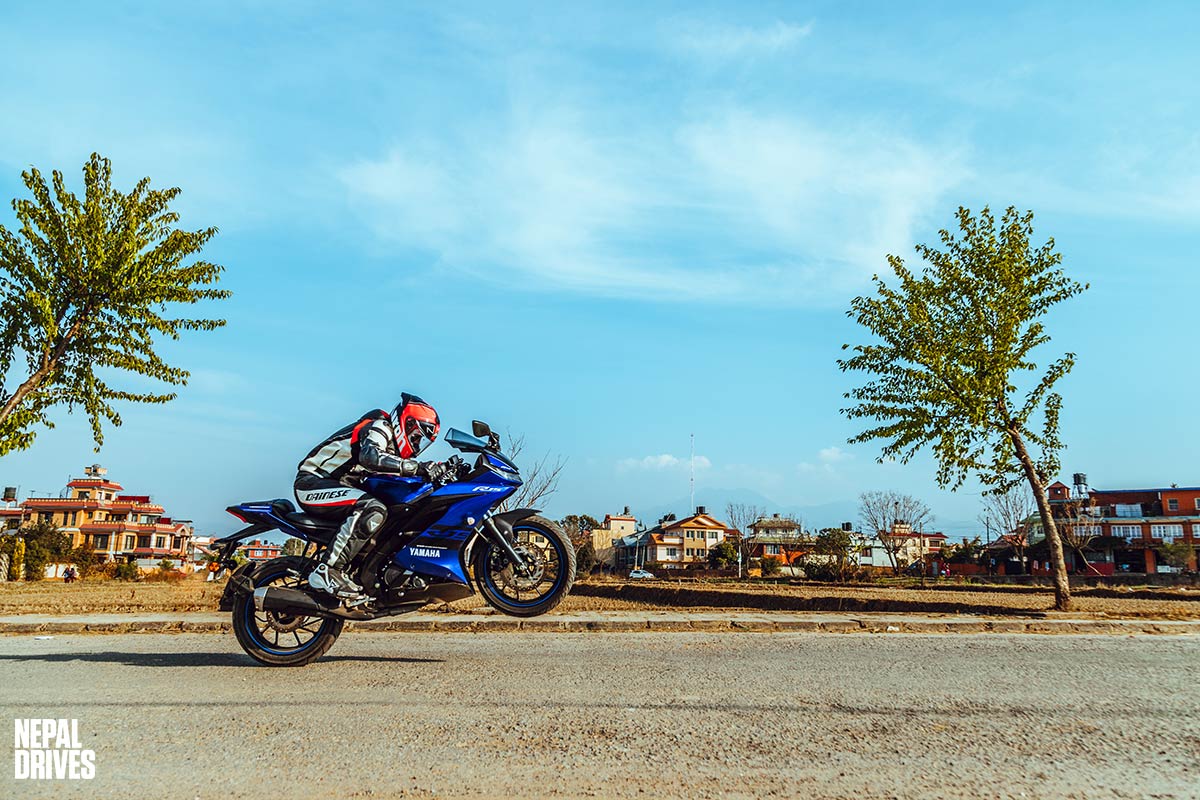 If looks could kill…

…we’d be dead right now. While the incredible stripped and compressed R1 styling of the Version 1 R15 was a showstopper, the V3 kicks it up a notch by adopting a sleeker appeal than its predecessors. Gone are the large, beady headlight units. Instead, a sleeker pair pave way for the sharp design dynamics. Dummy arrowhead air intakes splitting the twin led lamps to add aggression to the fascia of the R15 V3. 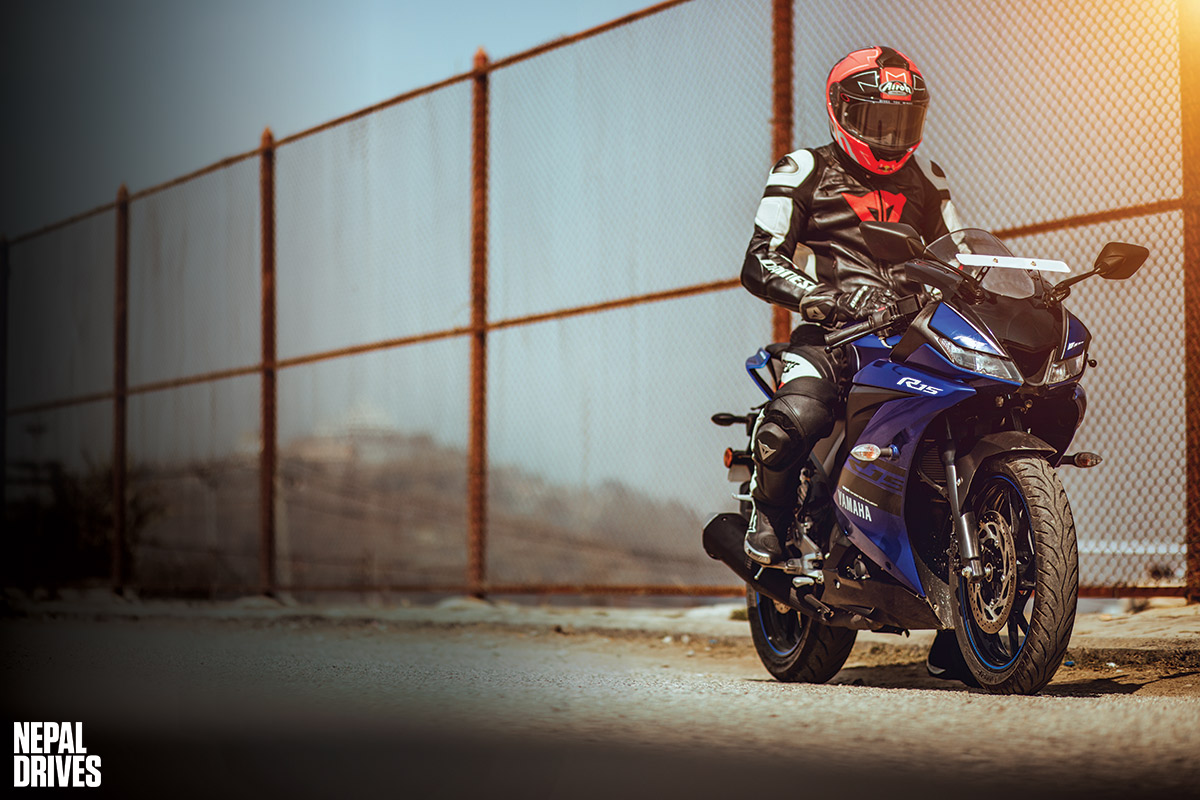 Yamaha has made it a point to make sure that the R15 V3 looks stunning from any angle. That means that the sharp design language is implemented into every nook and cranny of the motorcycle. Although the fairing leaves a bit of the engine peeking out, it is very well designed. The tank shrouds are well shaped and the fins on the tank add further detail to the well-sculpted machine. Rider’s seat sits low and the split seat design elevates the pillion seat way up.

However, it should be noted that the rider seat height has been slightly increased and the pillion seat height slightly cut down from the previous versions. The tail design continues the aggressive language which is supplemented by the upswept exhaust and LED taillight unit. A fully digital instrument console, inspired by the R1, provides the telltale information to the rider. The engine, alloys, and handlebars come in black to further accentuate the design. 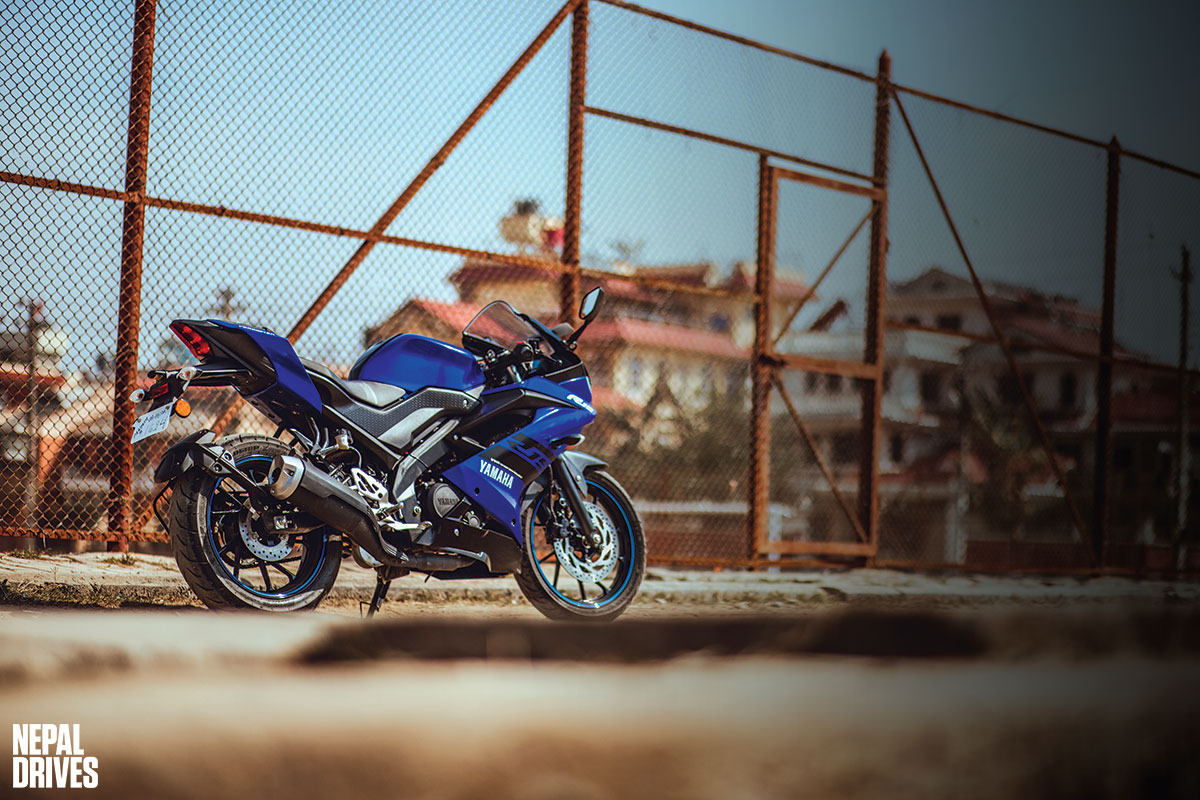 All in all the R15 V3 upholds the legacy of the breathtaking designs that Yamaha has spoilt us with.

Saddle up, and let her rip.

Not only do the aesthetics get major updates with the Yamaha R15 V3, but the engine and performance also get significant boosts too. The engineers have tinkered around with the insides and made some incredible improvements to the engine and performance. The VVA (Variable Valve Actuation) System helps improve torque, there is a higher capacity air cleaner for better performance, a newly designed crankcase and cooling system for better output and cooling efficiency, and assist and slipper clutch to cancel out the back torque while downshifting. 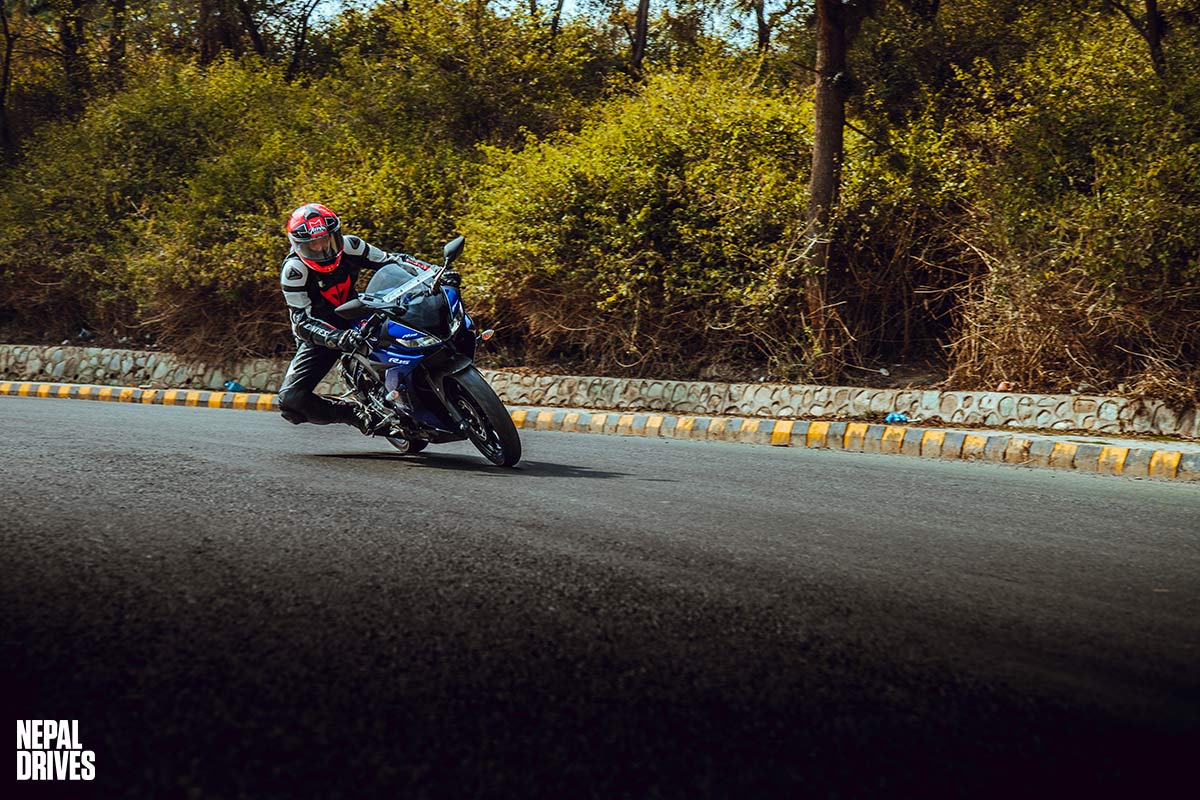 What all this translates to, is a riding experience that summits the segment. The 155 cc, single-cylinder liquid cooled engine which makes 19 bhp at 10,000 rpm and 15.1 Nm of peak torque at 8,500 rpm. The VVA kicks things up a notch and ensures that more good power is pumped at different rev ranges. So whether you’re cruising at 5000rpm or wrenching it out to the red line, the engine is continuously churning out a sumptuous amount of power and torque. And that means you watch objects in your rearview mirror disappear at a delightfully fast rate. 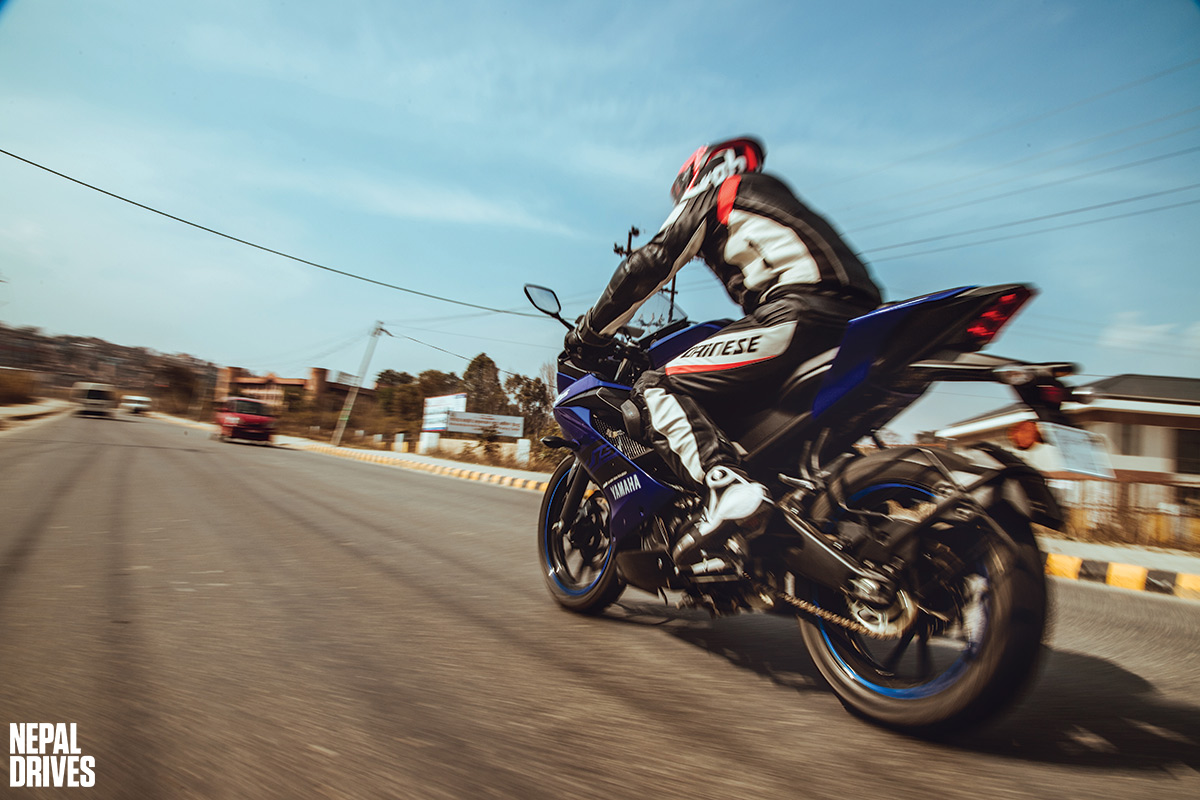 The riding stance remains aggressive but you can still use it for everyday commute without sacrificing your back and wrists. Having said that, if you are on the heavier side of the weighing scale, you will eventually end up with a sore back and wrists. Combined with this riding position is a wider, but shorter, swingarm (than version 2) which has reduced the wheelbase as well. This allows you to change directions more eagerly and this aspect works themselves into the bigger picture. 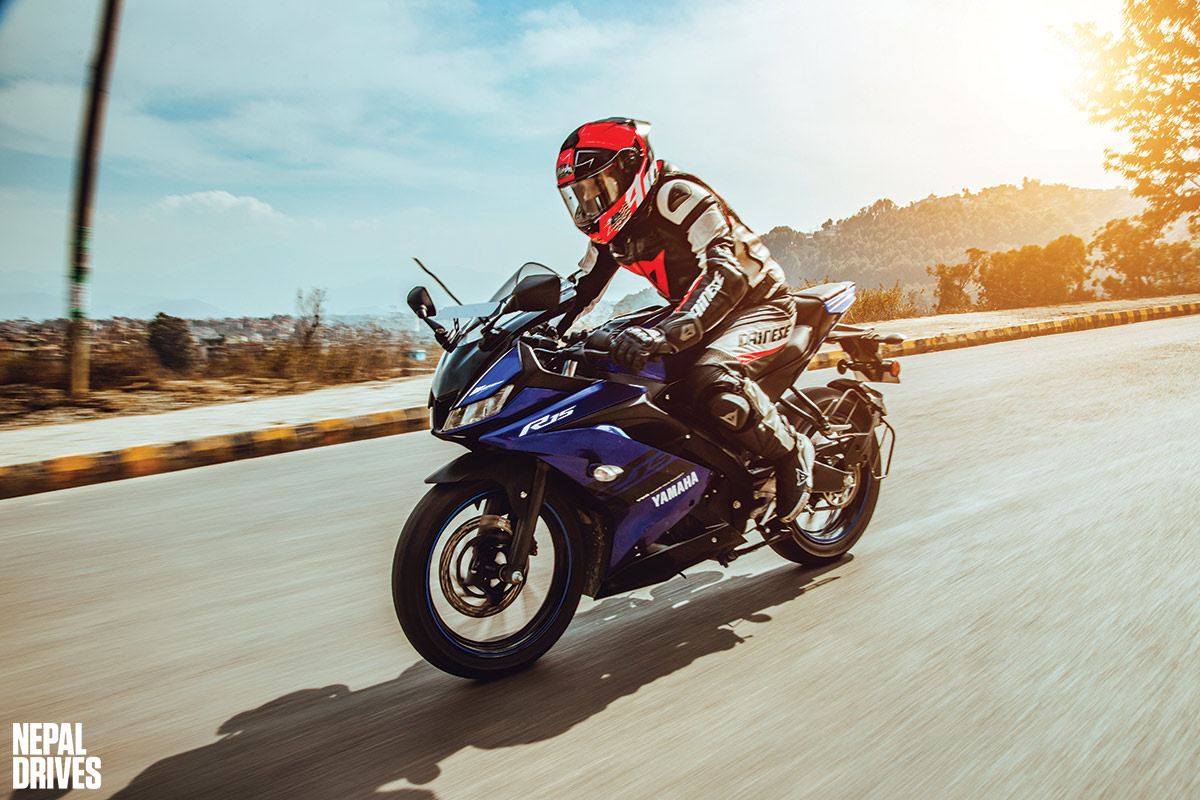 All in all, the upgraded R15 works wonders in bringing a smile across your face. And the directions to this are pretty simple: rev the engine to the redline on straights, brake hard as you approach the corner, drop a gear (segment first slip and assist clutch works wonders), hurl the agile R15 into the bend and power through from the apex. 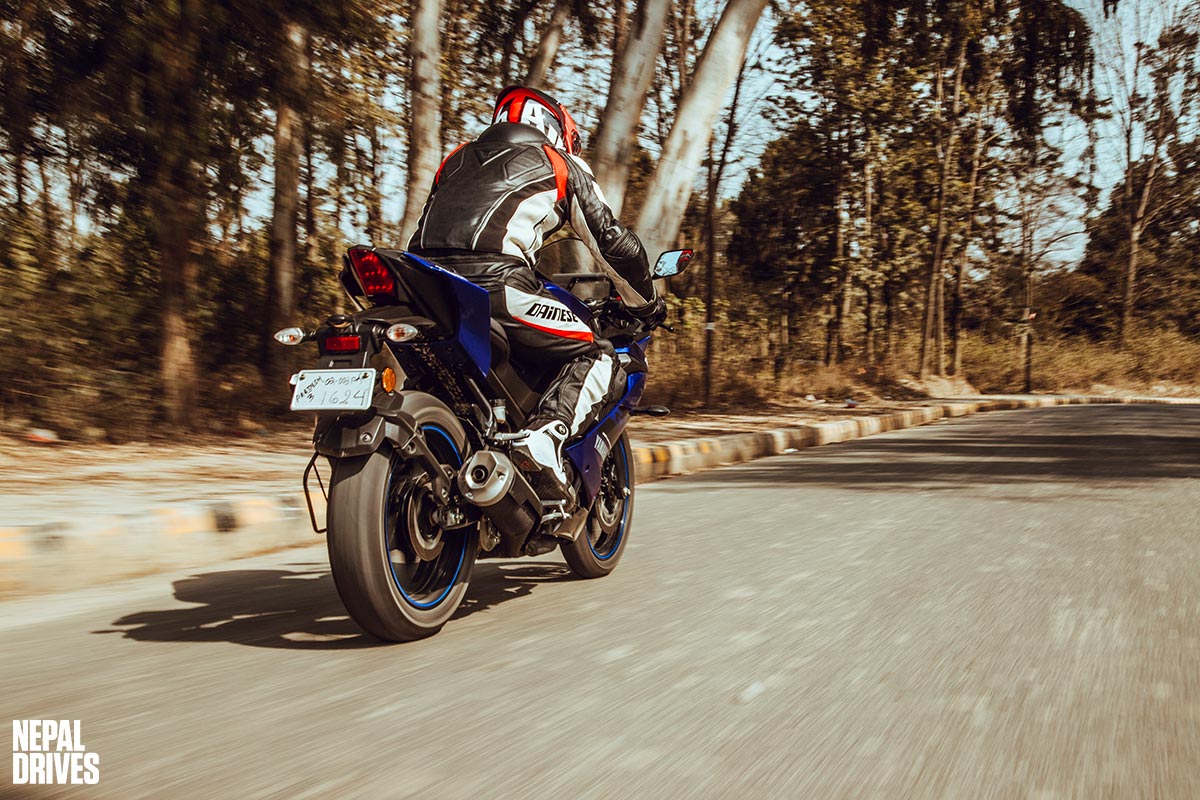 If we were to nitpick, we would probably ask for better brakes and ABS. While the ones fitted on the V3 aren’t bad, a little more bite would have done wonders to an already formidable package.

So, let’s get to the point…

The Yamaha R15 has been an iconic motorcycle for the motorcycling community, especially in this part of the world. But is the V3 worth the added premium to the Version 2? Absolutely. The upgraded design alone had us swooning, but the fact that it isn’t just a shinier prettier version is the biggest selling point. You get more for your money in terms of its performance too. 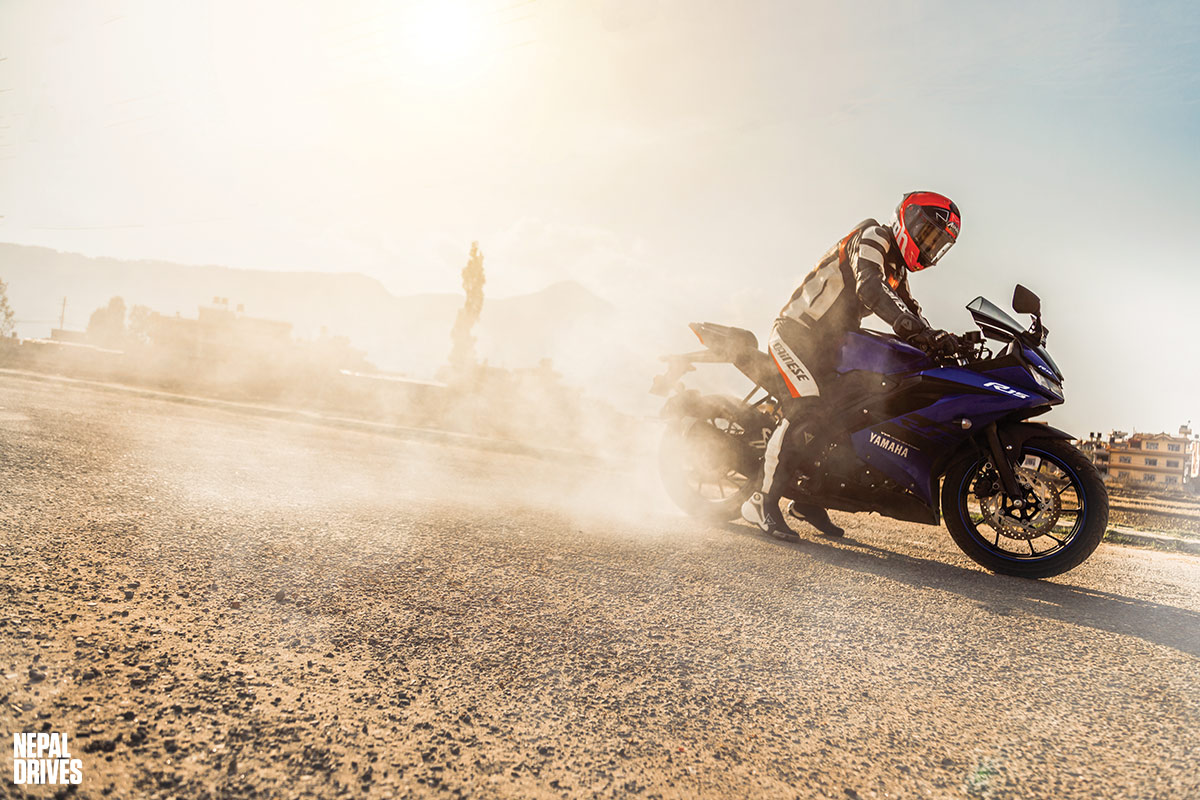 However, there is one more aspect we think is important for the V3 to live up to its predecessors.  It has to have the ability to have people obsess over it, to ignite a furious passion in people. And to be able to blitz through roads at maddening speeds and put a smile across your face when you ride it. Honestly, in this segment, there are very few others that can give it a run for its money. 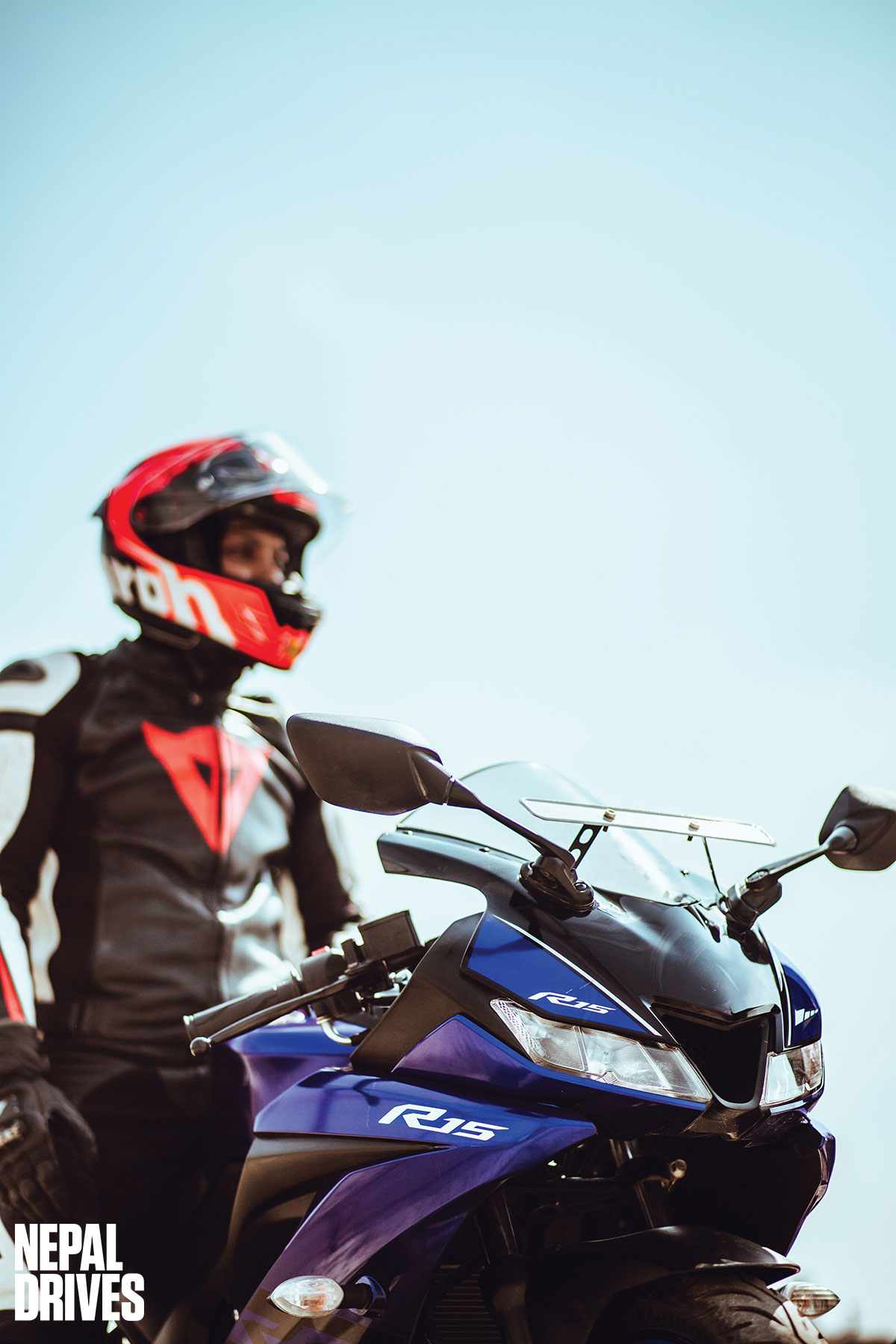