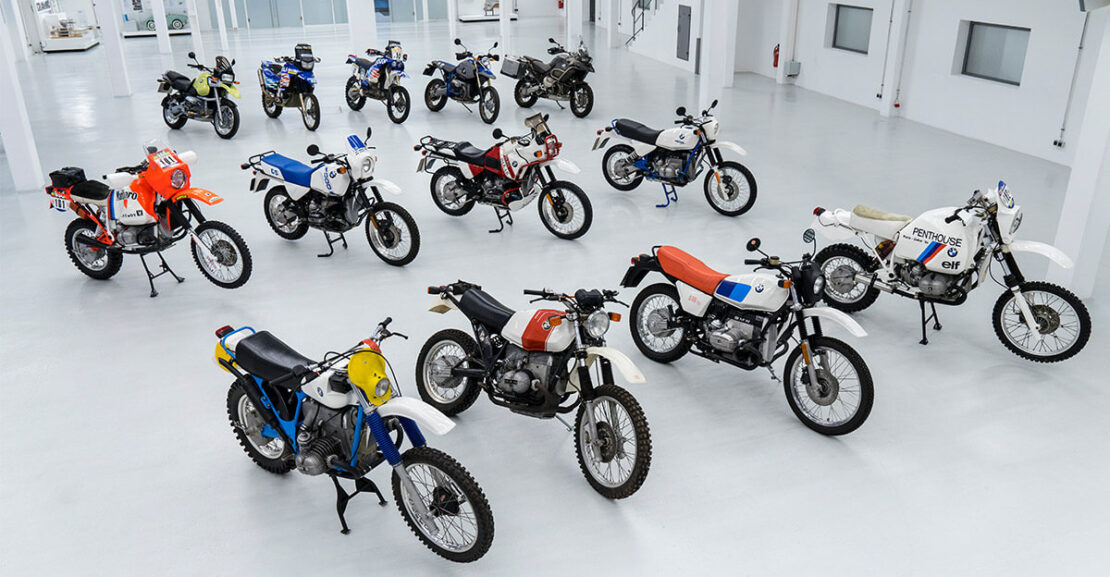 A motorcycle concept that is as legendary as it is sophisticated is celebrating its 40th anniversary in 2020: The iconic BMW GS models have turned 40. In autumn 1980 BMW Motorrad presented the R 80 G/S, a motorcycle that combined two very special areas of riding for the first time: Off-road and on-road. 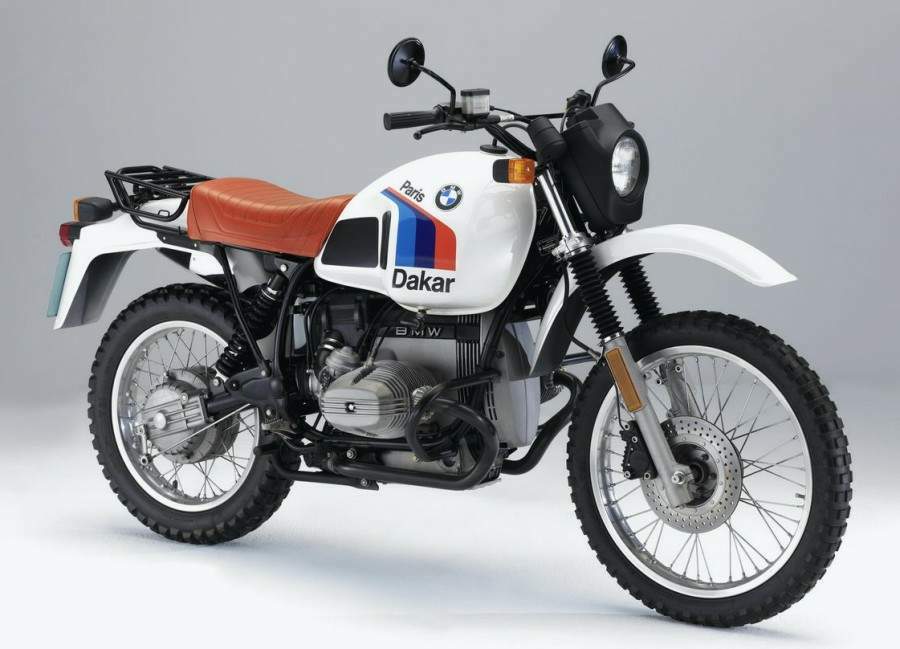 Thanks to its unique combination of road, touring and off-road capability – without compromising on everyday use – the R 80 G/S became the conceptual forerunner of the new motorcycle category of touring enduros created by BMW Motorrad. And what is more: The BMW GS models became the perfect synonym for the perfect partner on two wheels to explore even the most remote corners of our planet. To date, BMW Motorrad has been able to hand over more than 1.2 million BMW GS models to customers. 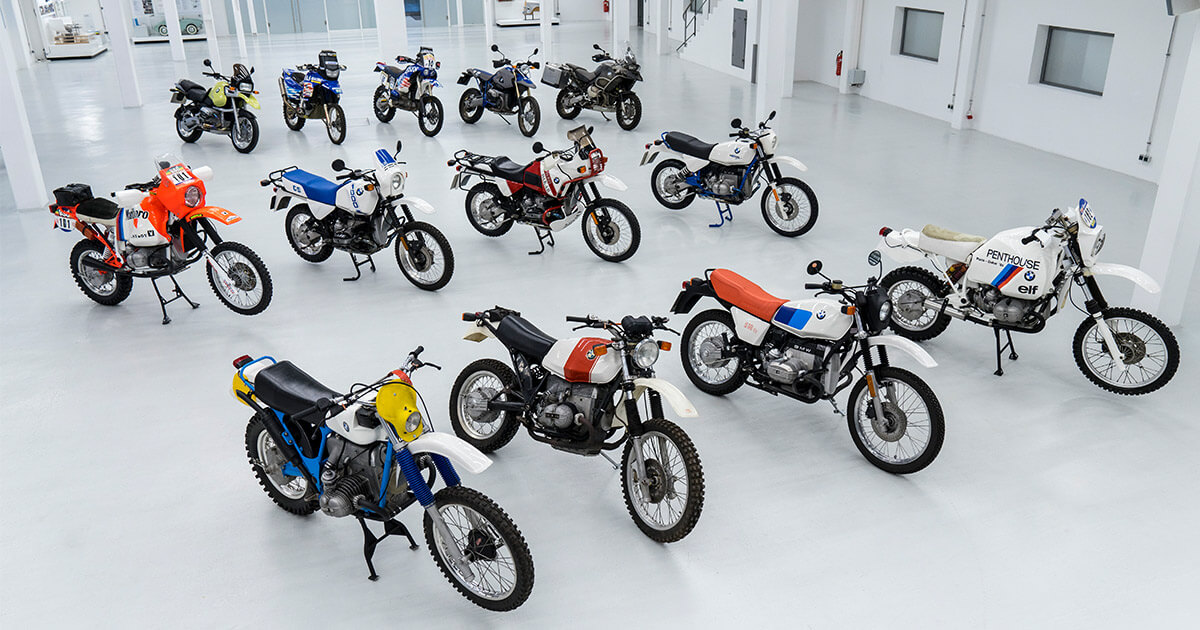 The outstanding talents of the boxer GS models – riding dynamics, off-road mastery, comfort, and robustness – have been continuously maintained and developed by BMW Motorrad over the past 40 years and successfully transferred to other BMW Motorrad model series.

In 1993, the F 650 “Funduro” was the first single-cylinder BMW enduro to come onto the market. While this bike drew its riding dynamics from its low weight and the thrust of the 47 hp single-cylinder, the changing of the guard took place simultaneously on the BMW GS models with boxer engines. 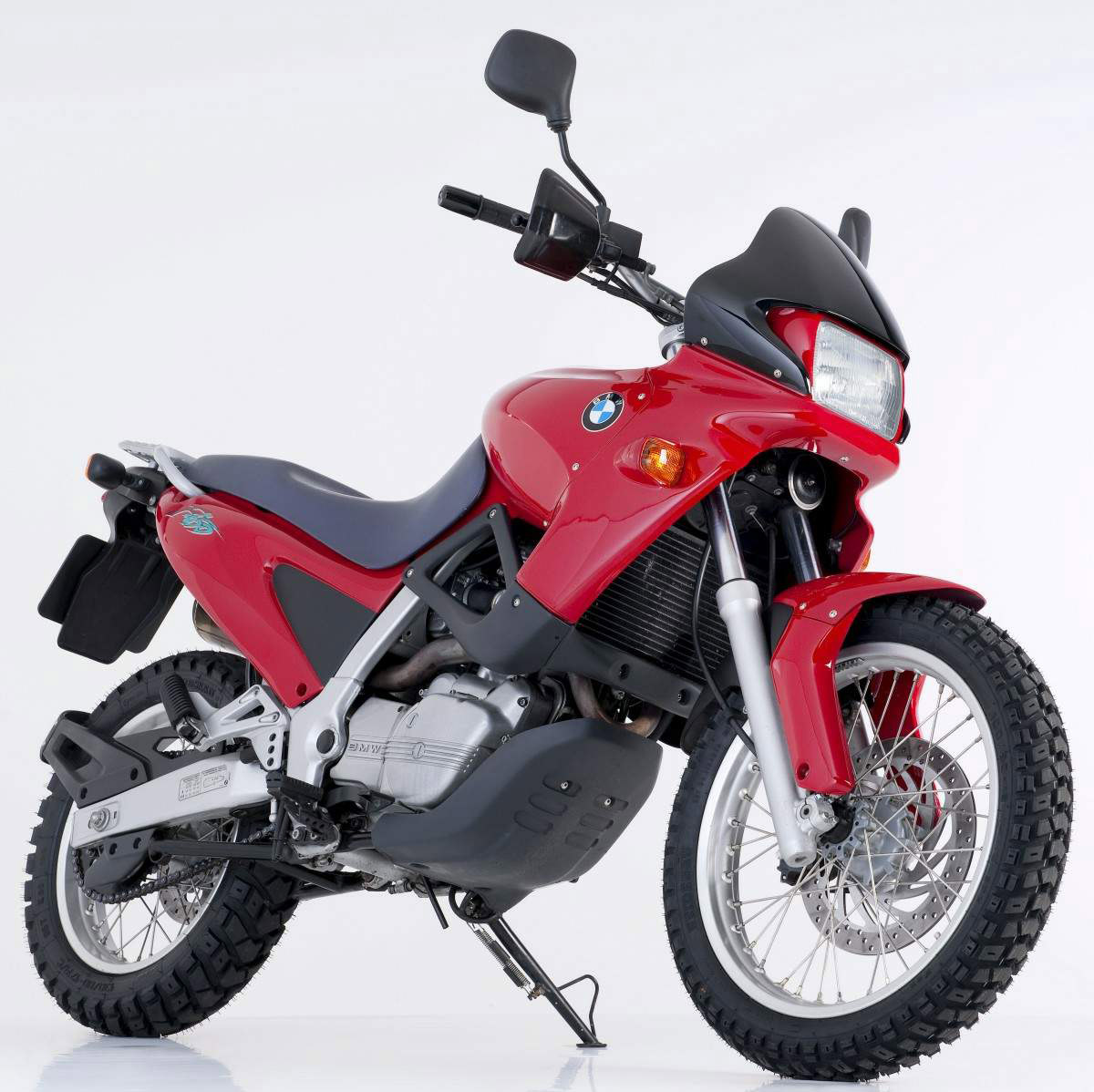 The GS as an innovation driver: Four-valve technology and Telelever.

With the BMW R 1100 GS, BMW Motorrad not only presented the first GS with a 4-valve boxer and 80 bhp output, but paved new paths with regard to suspension technology for large touring enduros. For the first time in an enduro, the engine and gearbox acted as load-bearing elements of the chassis, making a mainframe superfluous. 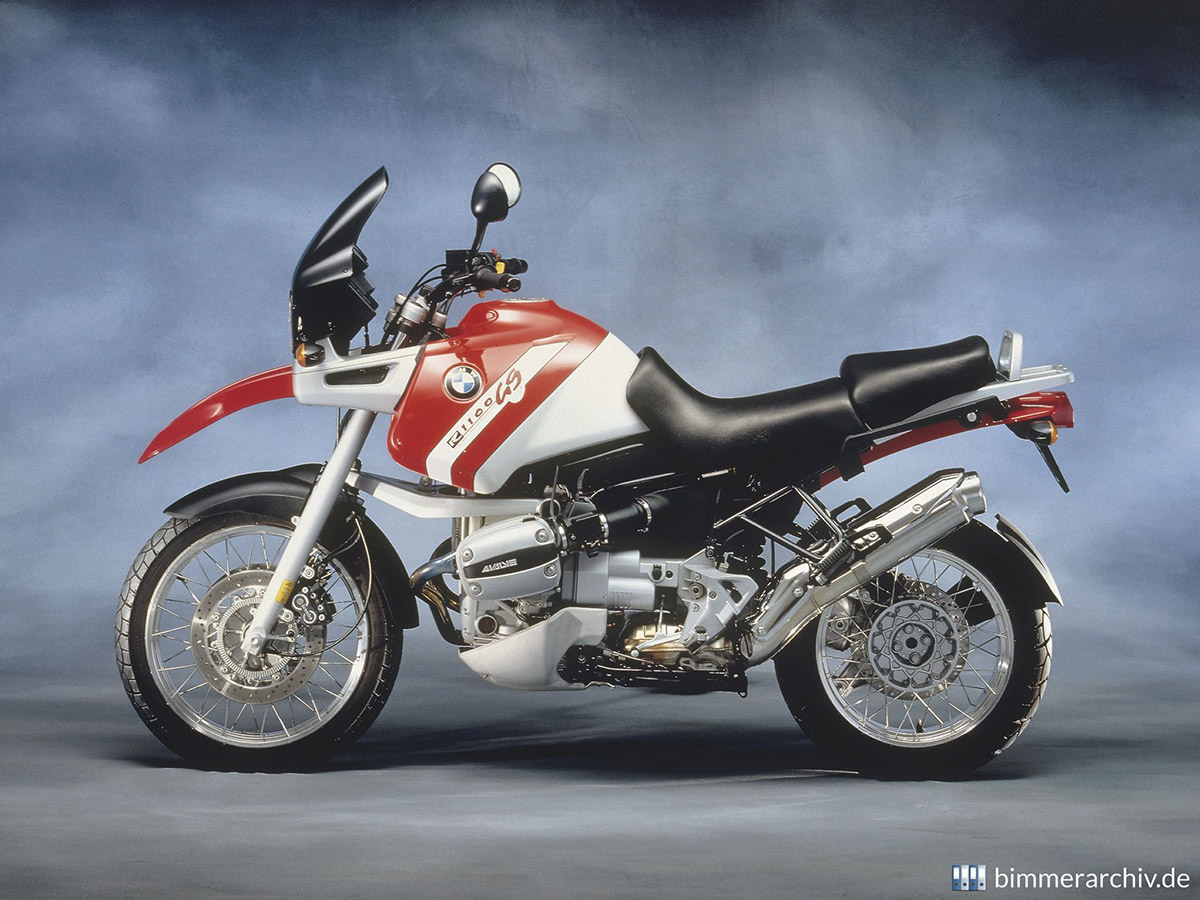 The BMW engineers had now created an innovative way of guiding the front wheels using the Telelever suspension. With the pitch compensation and highly sensitive response, they set new standards in this area. In addition, the new R 1100 GS was the first enduro ever to be equipped with ABS – a safety plus that is now standard equipment on all BMW motorcycles

The GS F series for the middle range.

In addition to numerous new and further developments, including the F 650 GS (first single-cylinder with electronic fuel injection, catalytic converter, and ABS), which was manufactured in Berlin from the year 2000 onwards, the F 650 GS and F 800 GS models launched in 2007 marked another outstanding milestone in BMW GS history. 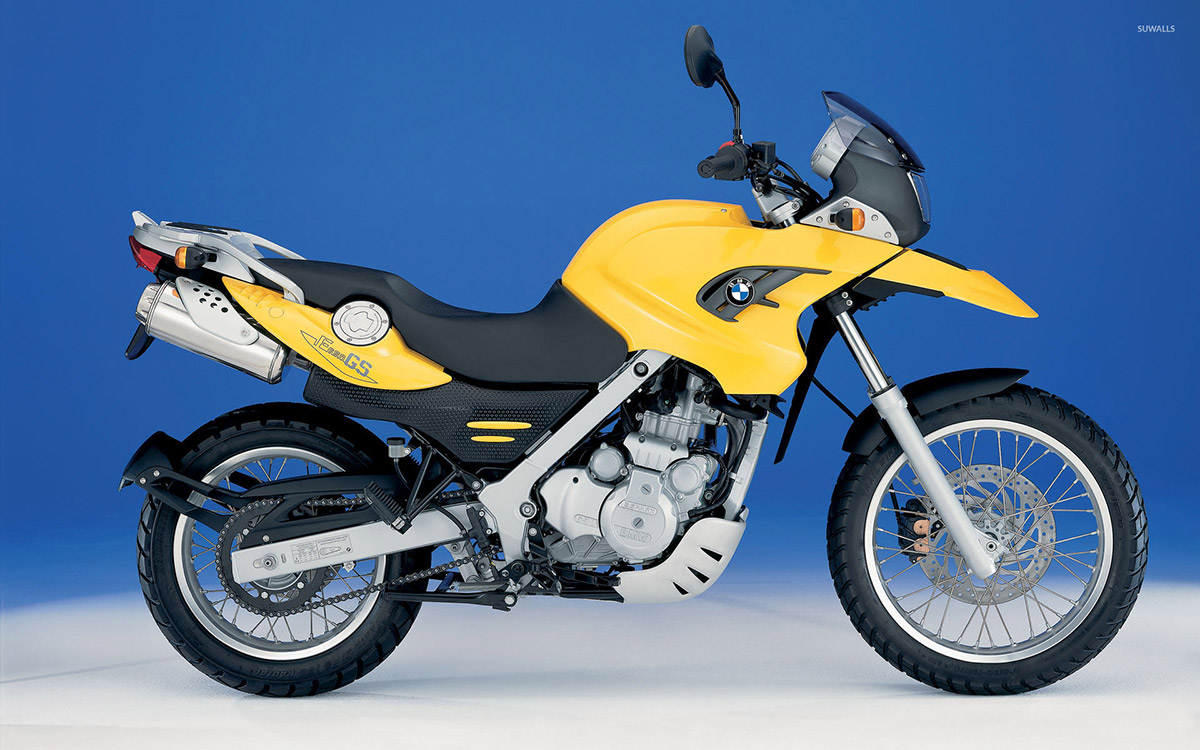 With their powerful, high-torque 2-cylinder in-line engine and torsionally stiff tubular frame, they interpreted the BMW GS theme in their own, yet very typical BMW way. With these new models, BMW Motorrad not only presented the successors to the extremely successful F 650 GS with its single-cylinder engine, but at the same time expanded the enduro offer in the medium range. 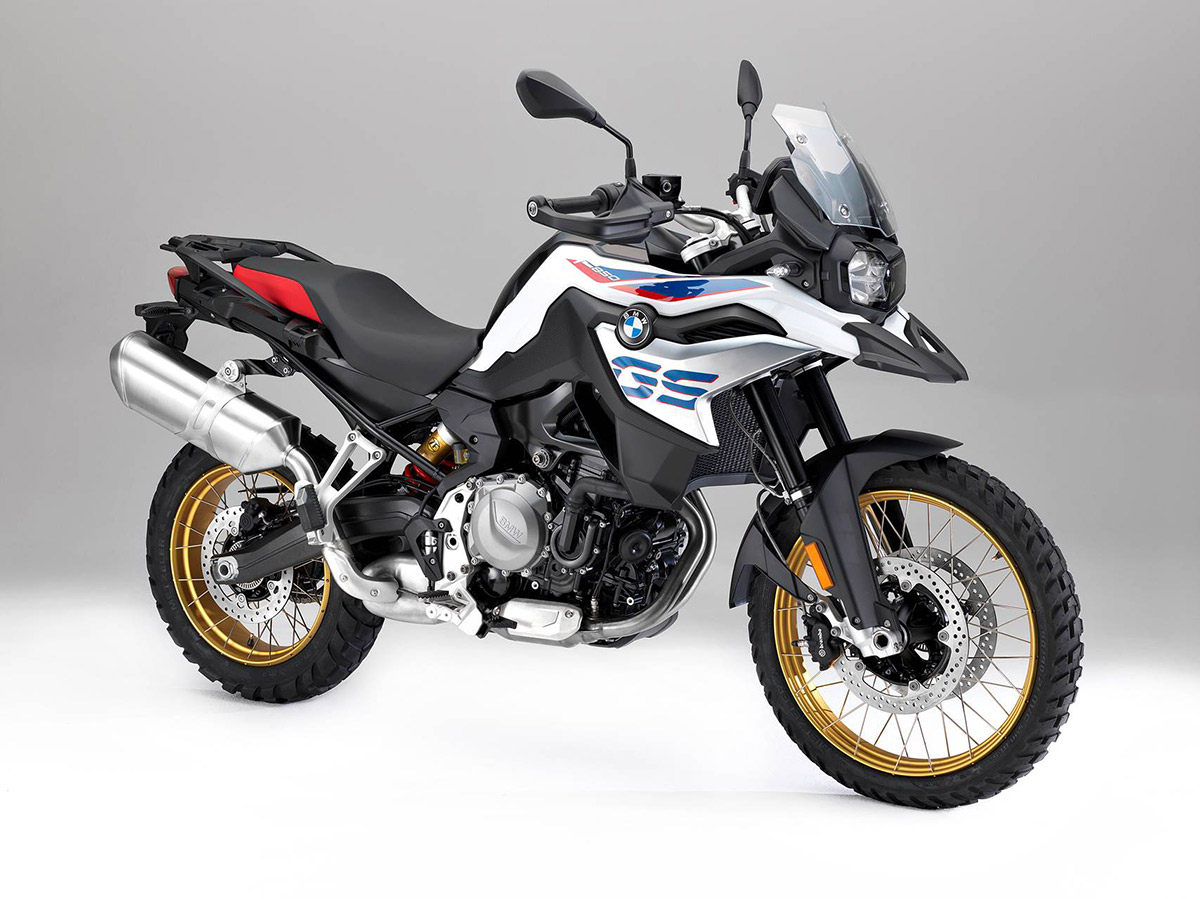 At the heart of the new development was a newly designed, powerful 2-cylinder in-line engine with two balancer shafts and 270/450 degrees ignition distance for optimised running characteristics and emotional sound. It generated 77 hp for the F 750 GS and 95 hp for the F 850 GS from 853 cc, thus providing superior drive power for both GS models.

The dynamic development of the BMW GS theme continued unabated in the fourth decade. When BMW Motorrad presented the new R 1200 GS at Intermot in autumn 2012, interest was particularly focused on the completely redesigned engine. The air/liquid-cooled flat twin engine introduced cylinder heads featuring vertical flow; they had an integrated gearbox and a shaft drive on the left side from then on, supplemented by state-of-the-art chassis technology and electronic control systems such as ABS, traction control or semi-active chassis. 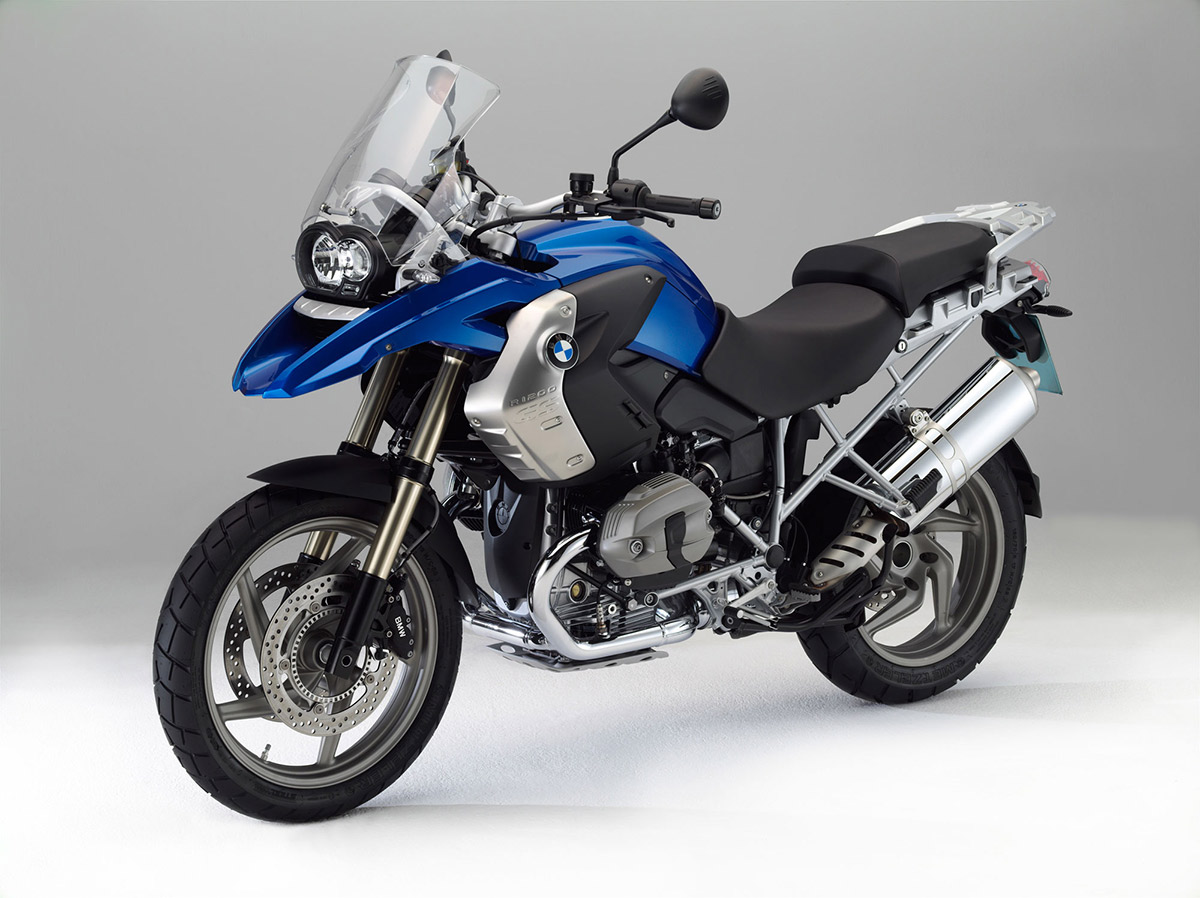 With an output of 125 hp, the new R 1200 GS also provided superior riding performance. Barely one and a half years later, in March 2014, the 500,000th BMW motorcycle of the boxer-engine GS model series rolled off the assembly line at the plant in Berlin – this was an R 1200 GS Adventure. 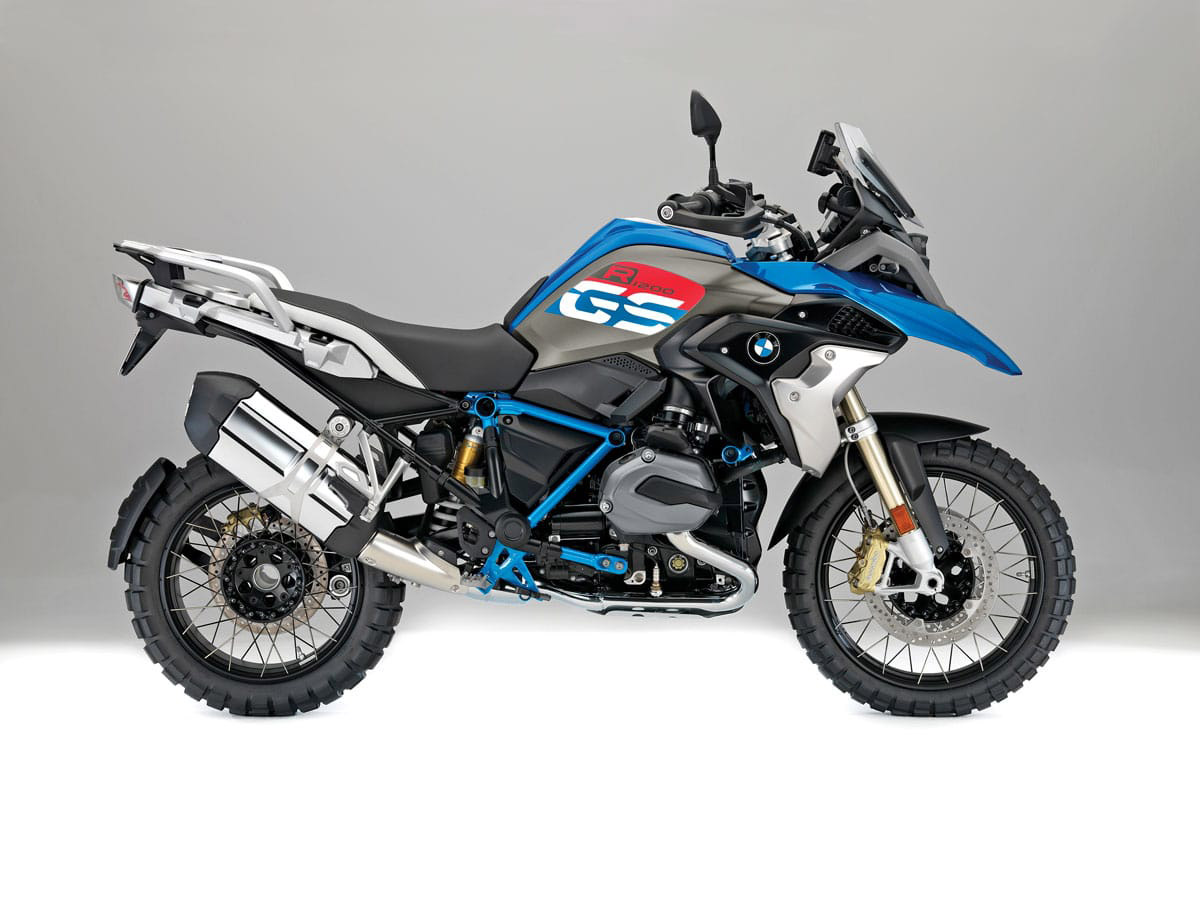 In autumn 2016, BMW Motorrad presented yet another GS model. This time it was the G 310 GS. It transferred the core qualities of a BMW GS to the engine capacity segment below 500cc and interpreted these in its own style. 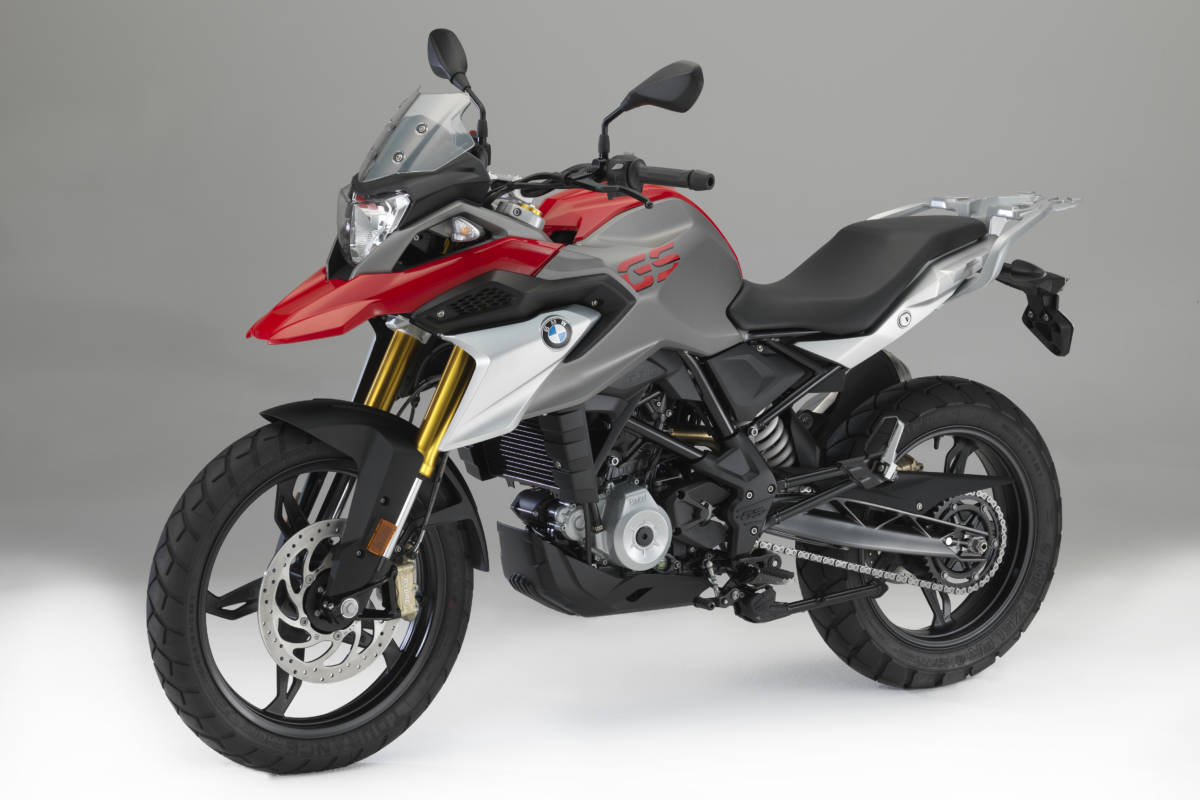 In the same year, a completely different interpretation of the GS theme came on the scene: the R nineT Urban G/S. The R nineT Urban G/S drew on the genes of the very first and legendary BMW R 80 G/S of the year 1980, transporting them into the modern era with contemporary technology in the form of a classic enduro-style BMW motorcycle with boxer engine. As with the other R nineT models, the powerful, air/oil-cooled boxer engine with 81 110 hp output in combination with a six-speed transmission was installed. 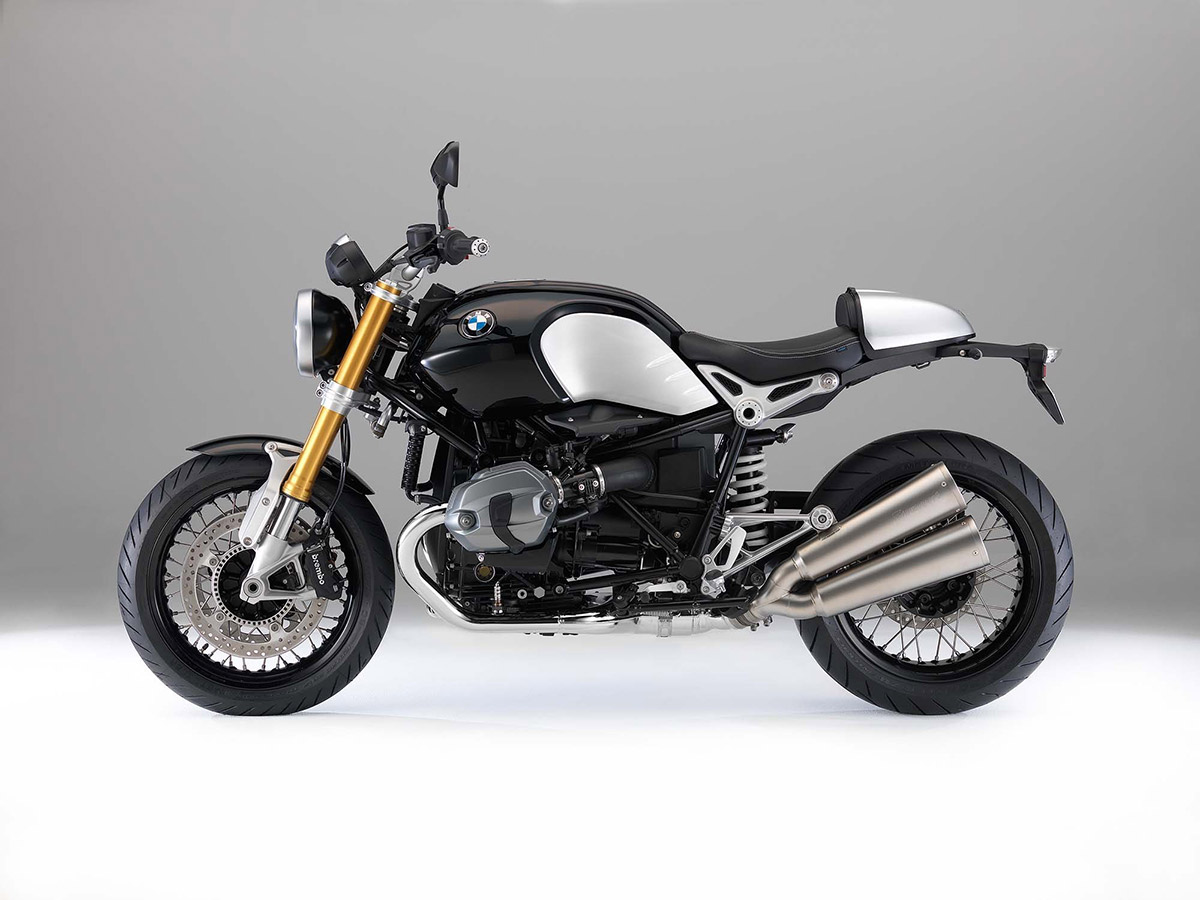 In autumn 2018, BMW Motorrad once again introduced a radical upgrade for the boxer engine of the large GS models in order to further improve power and torque yield as well as reduce fuel consumption and emission values. For this purpose, BMW ShiftCam Technology was used for the first time in the serial production of BMW Motorrad engines: this allowed valve timings and valve stroke on the intake side to be varied. 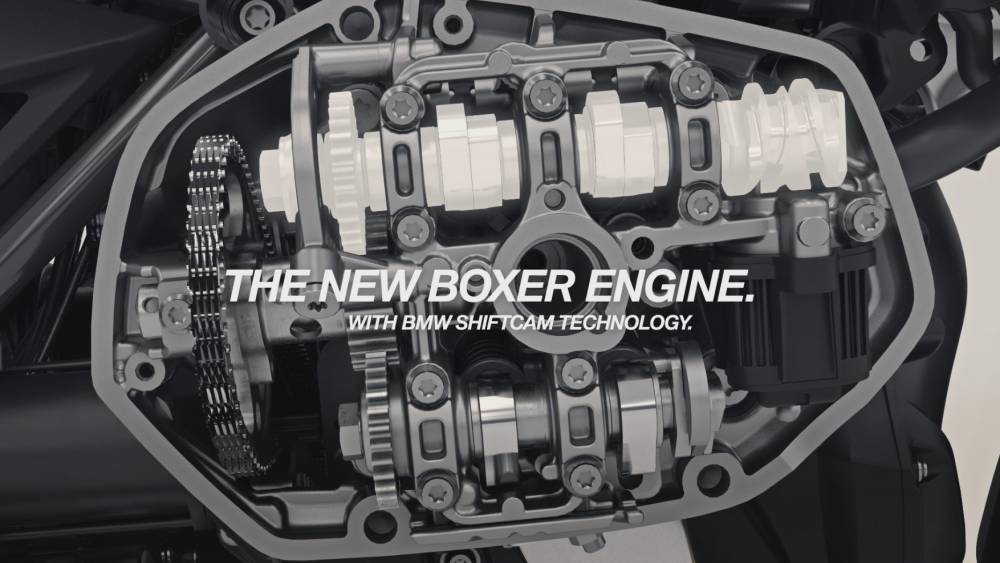 In addition, the intake camshafts were designed for asynchronous opening of the two intake valves, resulting in enhanced swirl of the fresh, incoming mixture and therefore more effective combustion. Other technical changes to the engine related to the camshaft drive – now taken care of by a toothed chain (previously a roller chain) – optimised oil supply, twin-jet injection valves, and a new exhaust system.