Nepal Drives | New Cars and Bikes in Nepal, News and Reviews #WeDriveNepal > News > Local News > Drive During The Lockdown With These Amazing Games 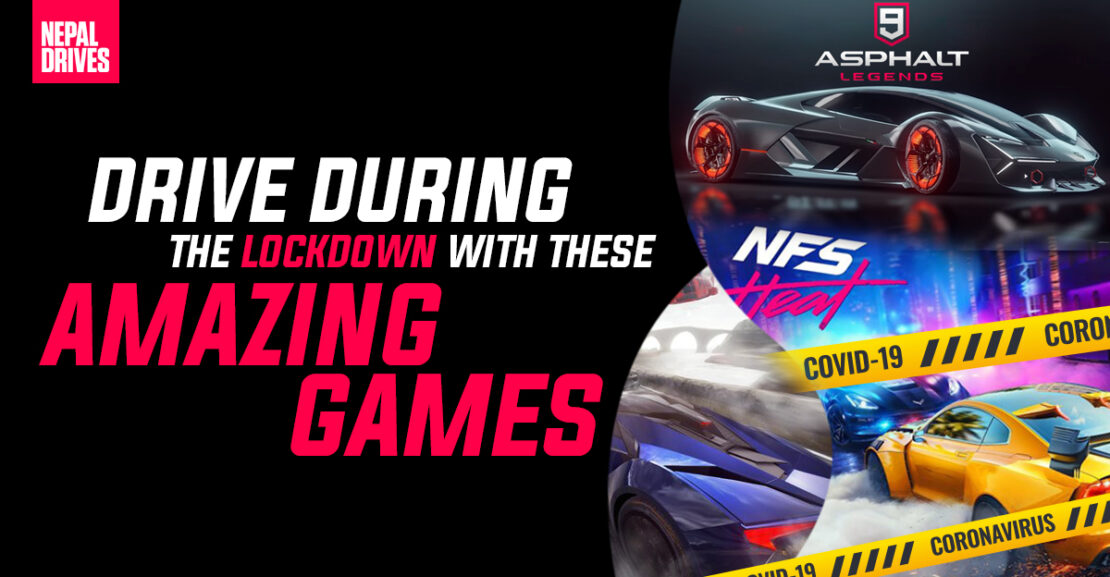 Drive During The Lockdown With These Amazing Games

The government has extended the lockdown period further and it looks like you will be stuck for a good while, you might be aching to get behind your steering wheel and mash that pedal but we urge you to hold it in, hold it in for as long as the country needs you to. In the meantime, Swornim, our resident gamer at Nepal Drives has made a list of some racing games that might very well be able to satiate your driving craves. The titles below should also help you out during these tough times.

Real Racing 3 is a racing simulator game, developed by Firemonkeys Studios and published by Electronic Arts. It is one of the best racing sim games to date. The quality of the gameplay is awesome, and the graphics are solid. It’s just the heavy use of in-app purchases that interfere with my enjoyment of the game. Real Racing 3 is not a small game, it is a heavy download that requires Wi-Fi. What you get for that download is a stable of 45 highly-detailed cars from manufacturers like Porsche, BMW, Audi, Nissan, and Ford. Car buffs will be pleased. It is available for both Android and iOS.

Asphalt 9: Legends is a racing video game developed by Gameloft Barcelona and published by Gameloft. Released on July 25, 2018, it is the ninth main installment in the Asphalt series. The graphics on this iteration is a genuine stunner, boasting next-level particle effects, lighting, and realistic weather. The game doesn’t boast licensed cars but in its best moments, you can expect the same gleeful sense of speed and violent carnage as the earlier Burnouts, albeit with a much-reduced sense of danger. It is available for both Android and iOS.

If you love straight-line speeds that tear up the quarter or half-mile tarmac then CSR Racing 2 is the game for you. Like the predecessor, CSR 2 is a drag racing game that is visually stunning and offers enough gameplay improvements that it should easily hook everyone who enjoyed its predecessor and a bunch of new fans to boot. While games like Real Racing 3 and the Asphalt series aimed to bring the full racing experience to mobile phones and tablets, Natural Motion’s CSR Racing has focused on delivering tiny moments of greatness. Every race is a straight shot, steering is never a concern. It’s about coming off the starting line just right and shifting at the perfect moment. If all goes well, 10 to 15 seconds later the player’s got a bit more cash and a bit more rep. It is available for both Android and iOS.

Any racing game list would be incomplete without a Need For Speed title. NFS Heat is a racing video game developed by Ghost Games and published by Electronic Arts for Microsoft Windows, PlayStation 4 and Xbox One. It is the twenty-fourth installment in the Need for Speed series and commemorates the series’ 25th anniversary. The Need For Speed franchise had lost their way but this iteration feels like the series is back on a solid track. The game is set in an open-world environment called Palm City, a fictionalized version of the city of Miami, Florida, and its surrounding area. The in-game map features diverse geography, including mountainous areas and open fields. The game features 127 cars from 33 manufacturers, with Ferrari returning to the game after being absent from Payback due to licensing issues.

Project CARS 2 is a motorsport racing simulator video game developed by Slightly Mad Studios and published and distributed by the Bandai Namco Entertainment group for Microsoft Windows, PlayStation 4, and Xbox One. Project CARS 2 offers 140 track layouts at 60 different locations and 189 cars to choose from. The game now features off-road driving, including rallycross tracks and cars. There are new manufacturers in the game, including Porsche, Ferrari, Lamborghini, Jaguar, Honda, Acura, and Nissan. In addition, Project CARS 2 supports virtual reality (VR), up to 12K resolution, and triple screen support. This is truly a game for the inner car nut.

Forza Horizon 4 is a 2018 racing video game developed by Playground Games and published by Microsoft Studios. It is set in an open world environment based in a fictionalized Great Britain, with regions that include condensed representations of Edinburgh, the Lake District (including Derwentwater), and the Cotswolds (including Broadway), among others, and features currently over 670 licensed cars. The game even turns our weather into something beautiful. As the season change, so does the climate and the nature of the light, along with the driving conditions.  Only available for Xbox and PC, the Forza Horizon 4 is one of the best, if not the best racing games made to date.

Have fun playing all these titles, acquire fantastic cars and set unbeatable high scores. Stay indoors, wash your hands, stay safe… These troubling days shall be over soon.