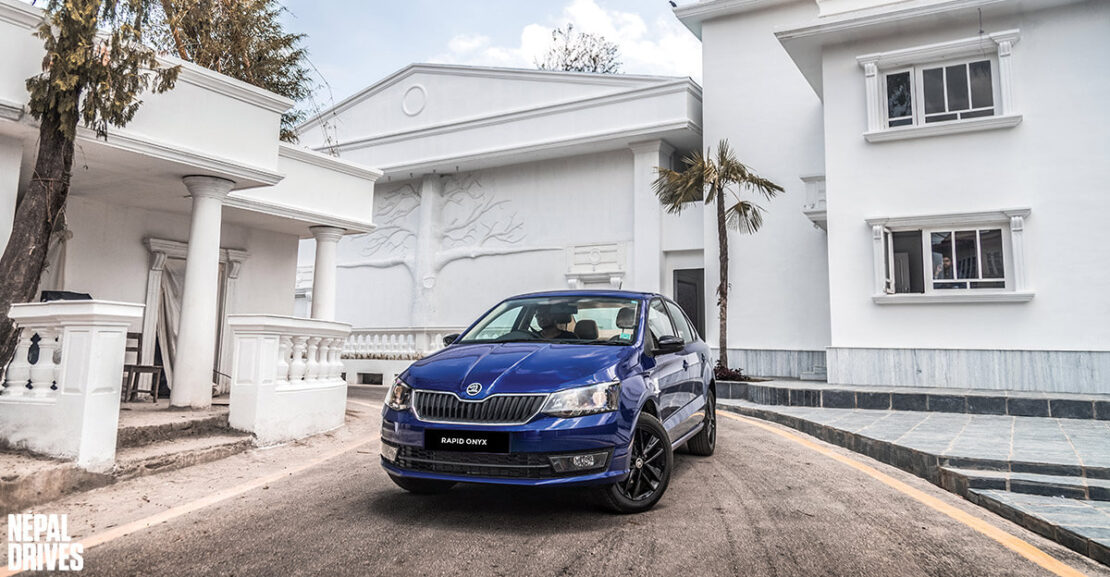 LET’S ADDRESS THE ELEPHANT IN THE ROOM… 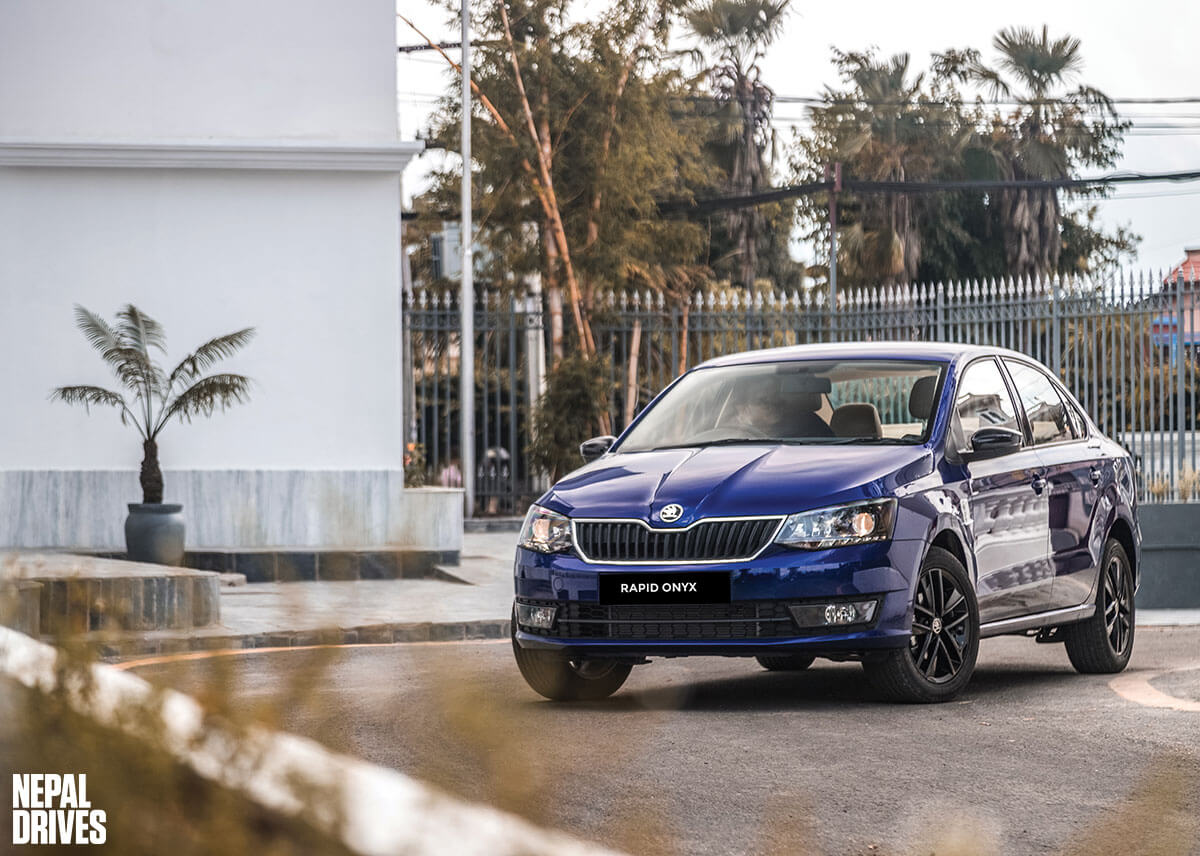 The blue paint job. We understand if blue is not your thing, colors are completely a matter of personal preference. But you have to hand it to Skoda, in a sea of cars covered in dull shades of grey, this Rapid stands out with a striking shade of blue. Complementing the blue is generous use of black. There are black ORVMs, 16 inches of black alloys; even the casings for the projector headlamps are black.

Right off the bat, the Rapid Onyx oozes sporty vibes. Over on the side, the immediate attention grabbers are the black alloys. These 16 inchers come with a set of wider 195mm rubber compared to the 185 on the regular Rapid which not only makes the car look beefier but also increases the body’s distance from the ground which now stands at 170mm which is a toe-dip into SUV territory.

However, things are a bit too simple on the back. The Rapid features a keyhole on the boot lid which sticks out like a sore thumb. It is the keyhole is rendered redundant, because the car already has a boot unlock integrated underneath the boot and also boot opener latch fitted onto the driver’s door. Also, we would have loved to see a small black lip spoiler to further accentuate the blue and black vibe but alas, it is what it is. Overall, we quite love the look of this car, frankly because it is so blue and unique.

WE WERE LOOKING FOR A CABIN WITH GENEROUS BLUE ACCENTS…

but Skoda had other ideas. That doesn’t mean it’s bad, it is really plush. Skoda has gone the “if it ain’t broke don’t fix it” route with the Rapid Onyx’s interior. Desiring blue accents would only be nitpicking on what is otherwise an amazing cabin. The cabin gets a premium beige treatment with great fit and finish. The driver’s seat sports proper padding and adjustment, the steering wheel comes with tilt and telescopic adjustments which means getting into a comfortable driving position is easy.

Out on the back seat, you get a comfy bench with double headrests. There are huge footwells under the front seats where the rear passengers can stretch their legs. Add in a third passenger then they might struggle during long journeys thanks to the massive transmission tunnel that eats into the middle seat. You get plenty of storage spaces throughout the cabin including a large glovebox that is illuminated allowing you to fetch for out things at night. 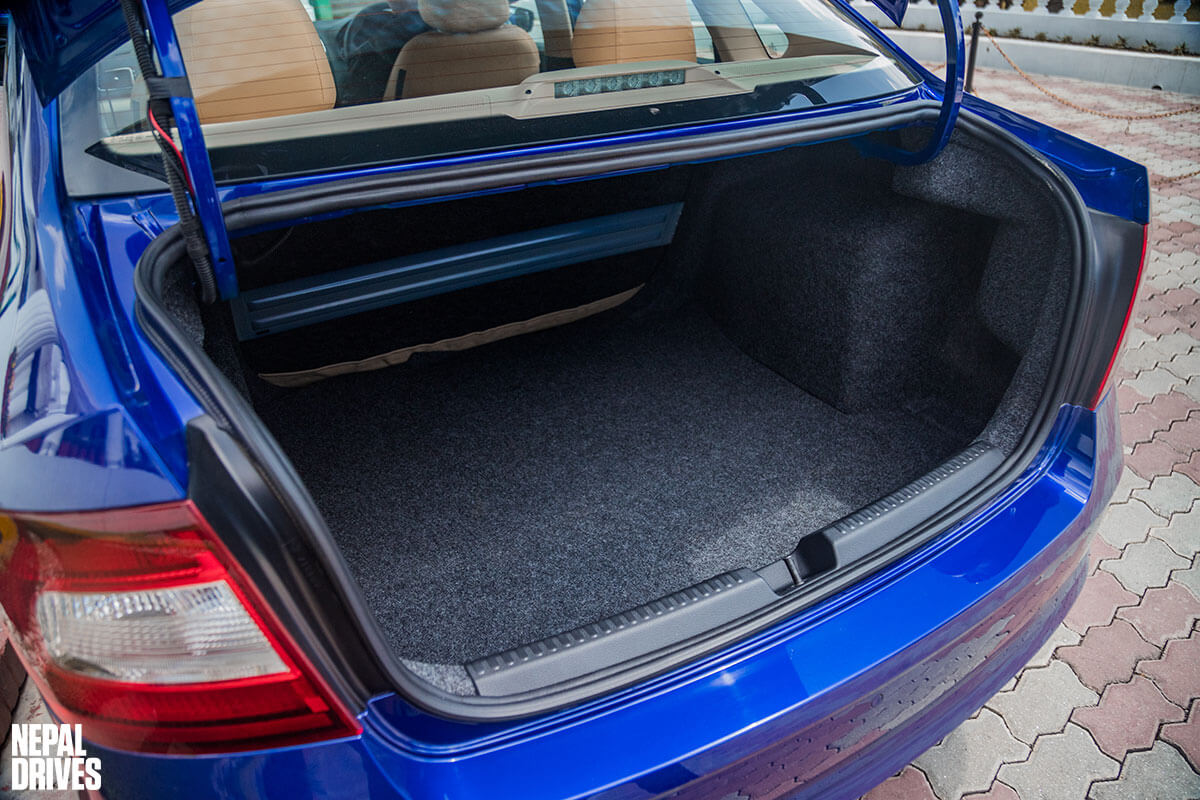 Apart from that, you also get a sizeable boot that will help haul a week’s worth of family luggage. Talking equipment, the Rapid Onyx comes with fully automatic air conditioning and a touch screen infotainment system that looks sharp and is fluent to use. Overall, the Rapid Onyx doesn’t shy far away from the regular Rapid when comparing interiors; however, it has made the most needed upgrades.

ONCE YOU TAKE THE SKODA RAPID ONYX OUT FOR A SPIN…

you immediately notice two things, which also happen to be the changes the Onyx brings from the regular Rapid. First up: the increased ground clearance. The Rapid Onyx sits higher now and while you will barely feel it on the tarmac you will definitely feel it on rougher roads as the Rapid Onyx goes through a rough patch like a walk in the park. 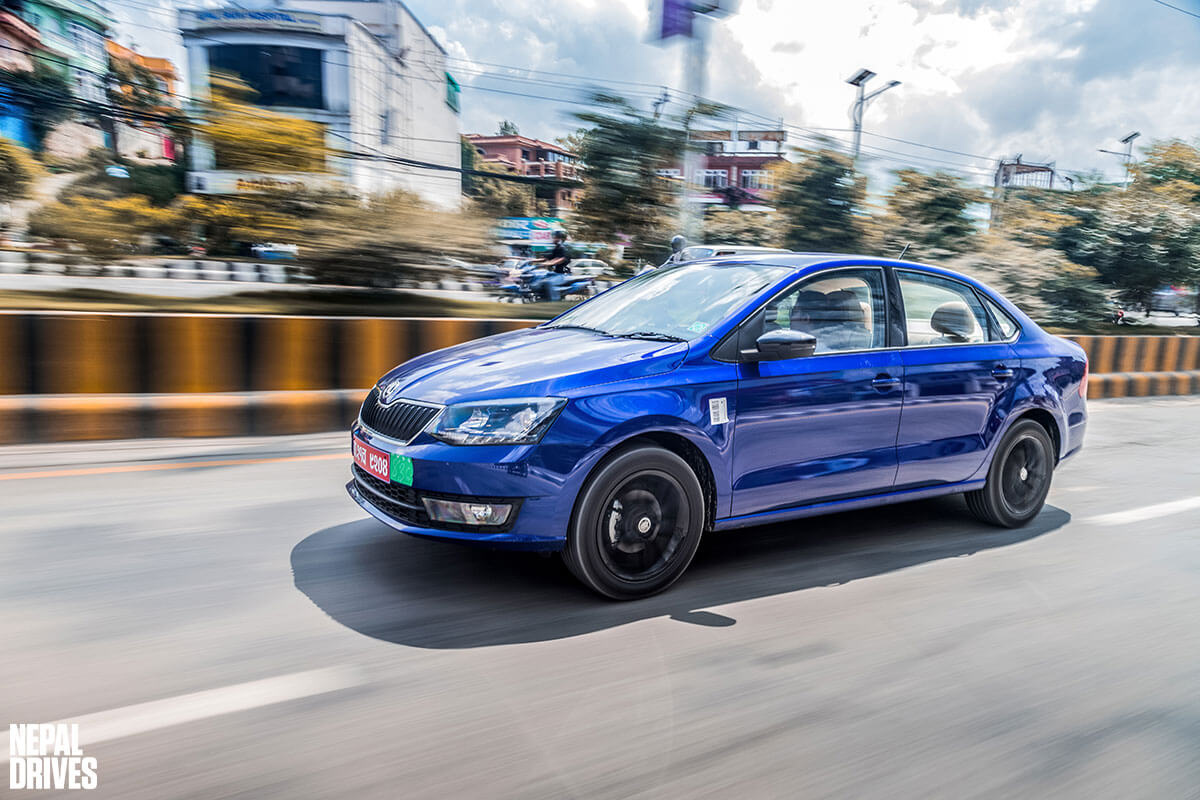 Another change the Rapid Onyx brings is the inclusion of wider tires and boy you feel it. Not only do the wider tires help you drive over potholes and bumps easily, these 195s grips the tarmac and don’t let go resulting in better traction and increased cornering speeds. Apart from this the engine in the Rapid Onyx is exactly the same as the ones you get on other Rapids. It is 1.6-liter petrol mated to a 5-speed manual transmission that puts out 104 Bhp and 153 Nm of peak torque. 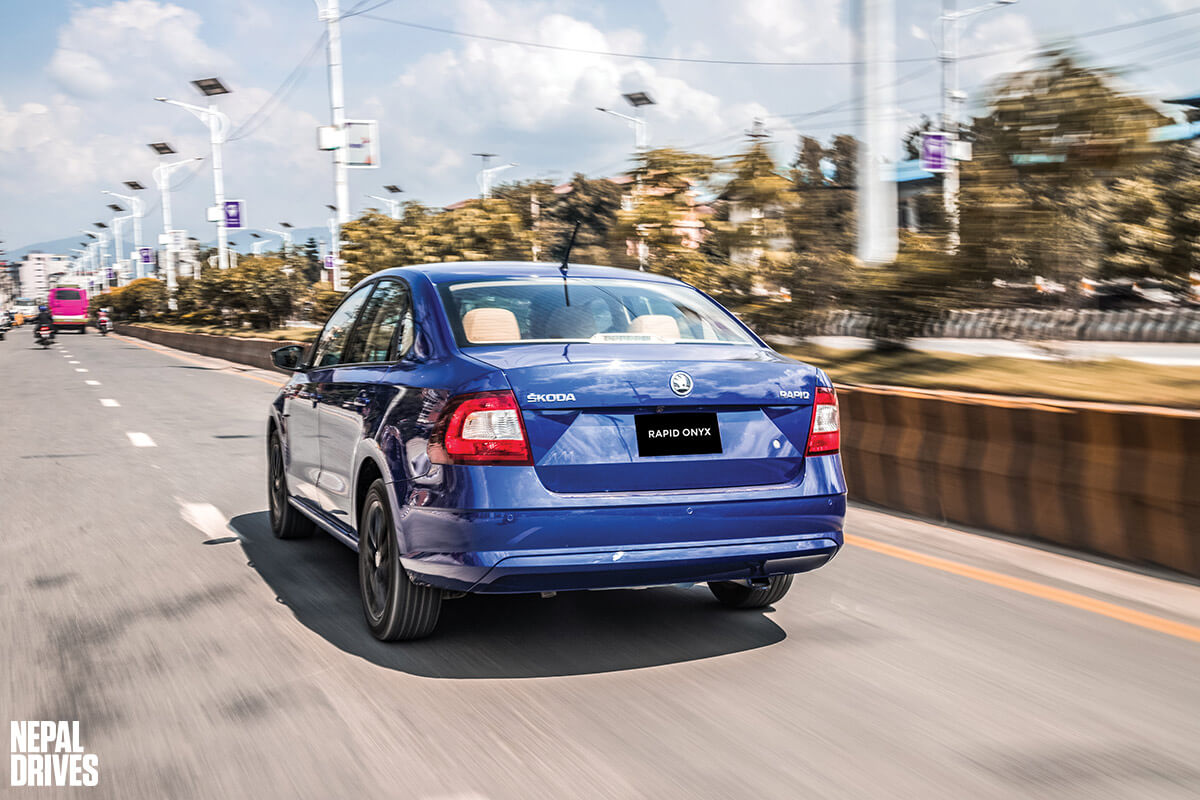 The power builds up gradually and you can feel the refinement in the engine when shifting up or down with fluidity. The Rapid Onyx remains planted and stable on the highways and twisties but don’t expect the car to hit triple digits without really working the gears. The Rapid Onyx will give you its best performance inside the urban confines while battling smooth tarmac and almost off-road conditions of any developing city.

WE WERE LEFT IMPRESSED… 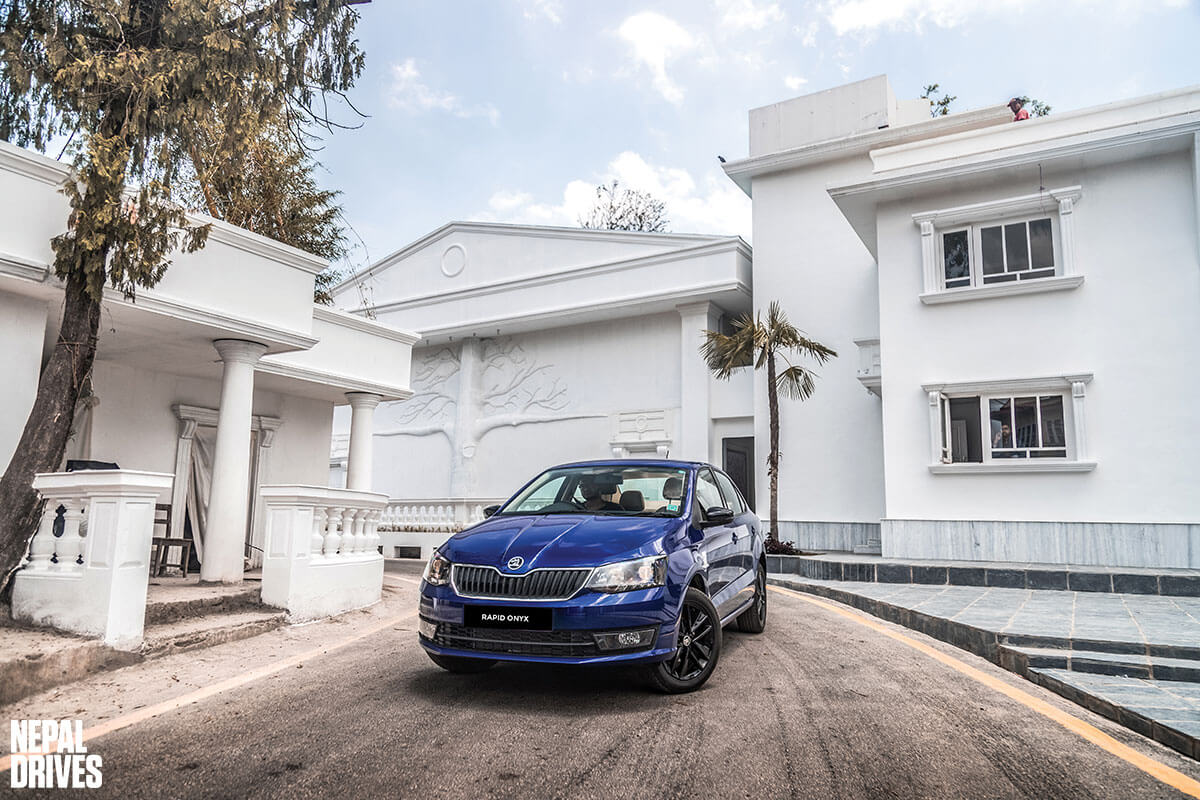