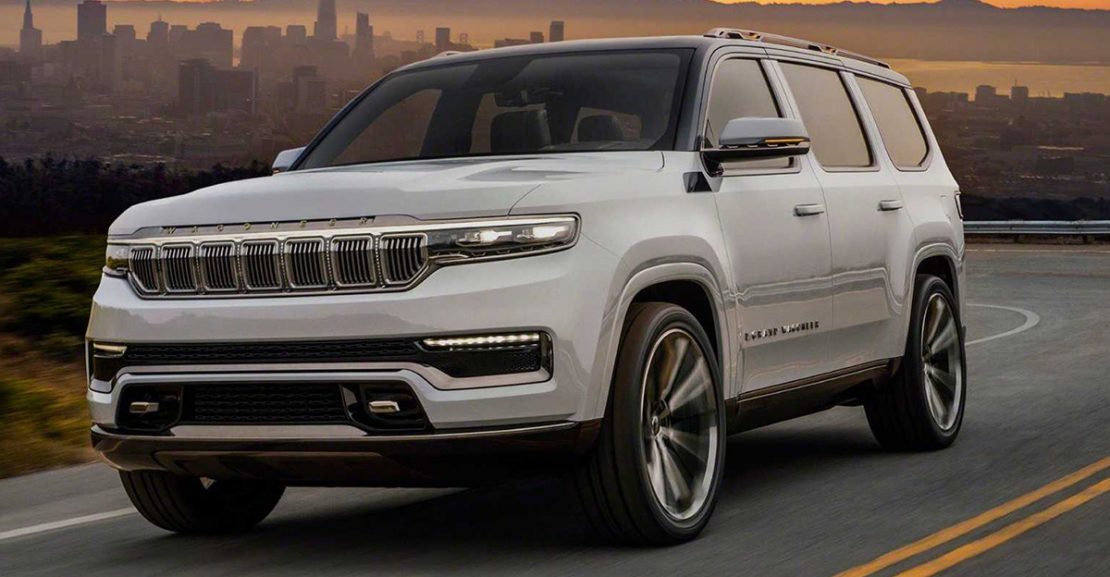 Jeep has revealed the Grand Wagoneer concept, one of the automaker’s hallmark vehicles. The Grand Wagoneer makes a strong first impression. It’s extremely boxy, a shape augmented by the square windows and bolt-upright pillars. It has bulging fenders that give it a wide stance. 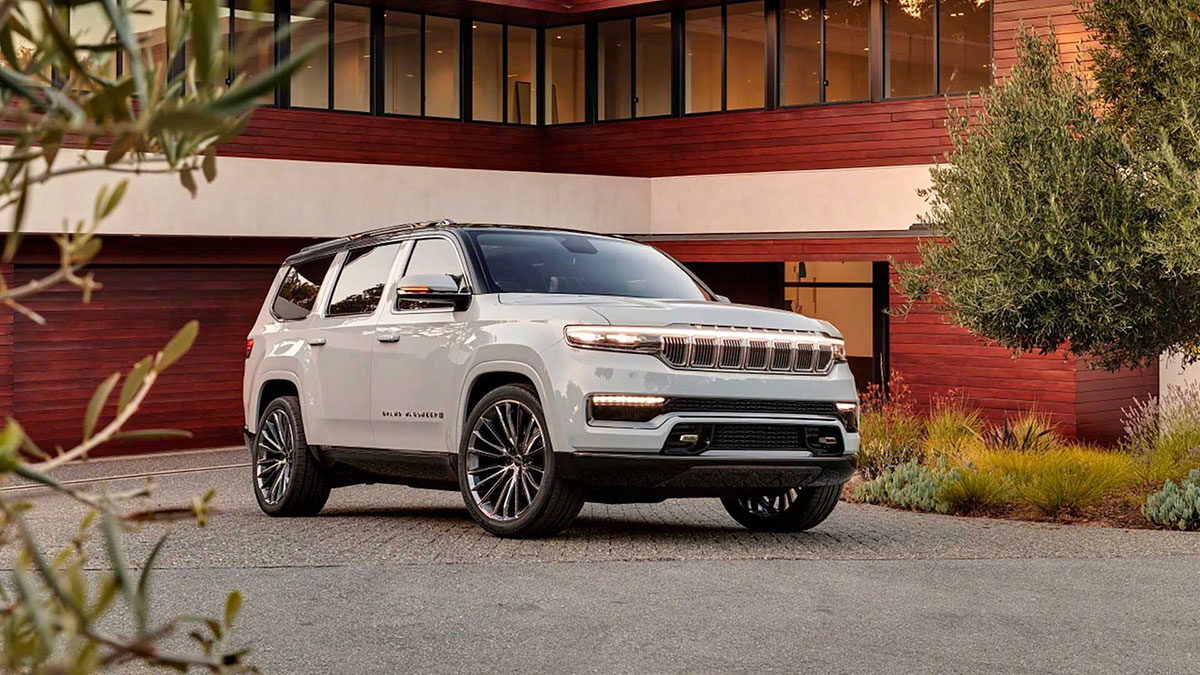 Its bold front end boasts a newly slim iteration of the brand’s seven-slot grille, bookended by narrow, knife-blade headlights. On the concept, an LED front light bar spans the entire width of the SUV, intersecting with the top of the grille and providing a solid base for the concept’s “WAGONEER” hood badging. 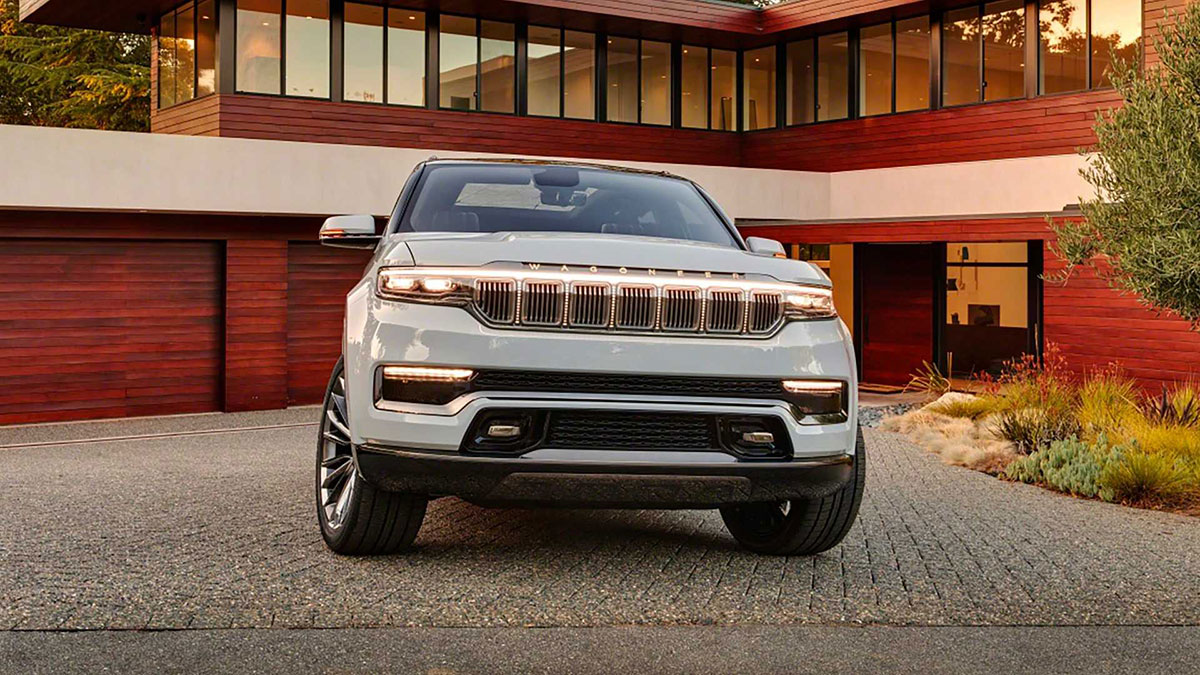 That contrast-painted roof is the most compelling styling feature of the side view. The Grand Wagoneer concept incorporates a painted A-pillar, the B-, C-, and D-pillars are body-color, and both the window openings and the contrast roof are rimmed in that same dark chrome. “GRAND WAGONEER” badging, replete with a US flag, appears on the lower front doors. 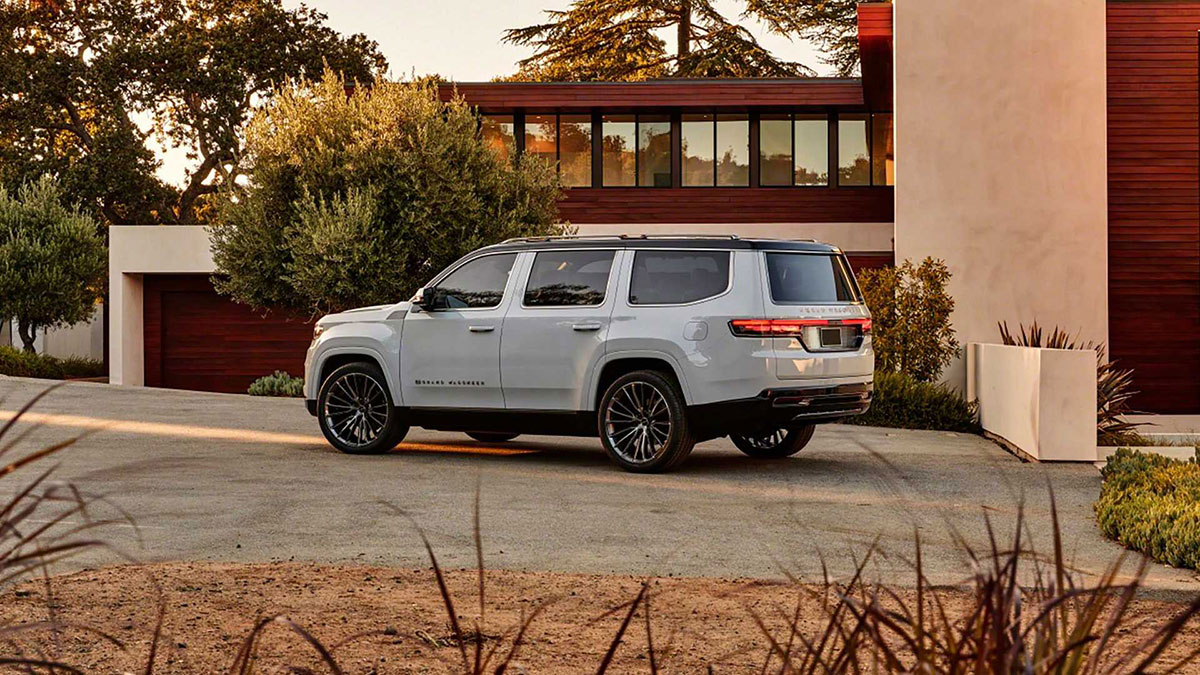 At the rear, the license plate opening is incorporated into the tailgate using a surround that recalls the shape of the front grille, an effect that dovetails into the nearly full-width taillight panel.  The upright rear end, contrast-painted roof, high hood, and swept-back windshield all look a bit more retro-inspired. 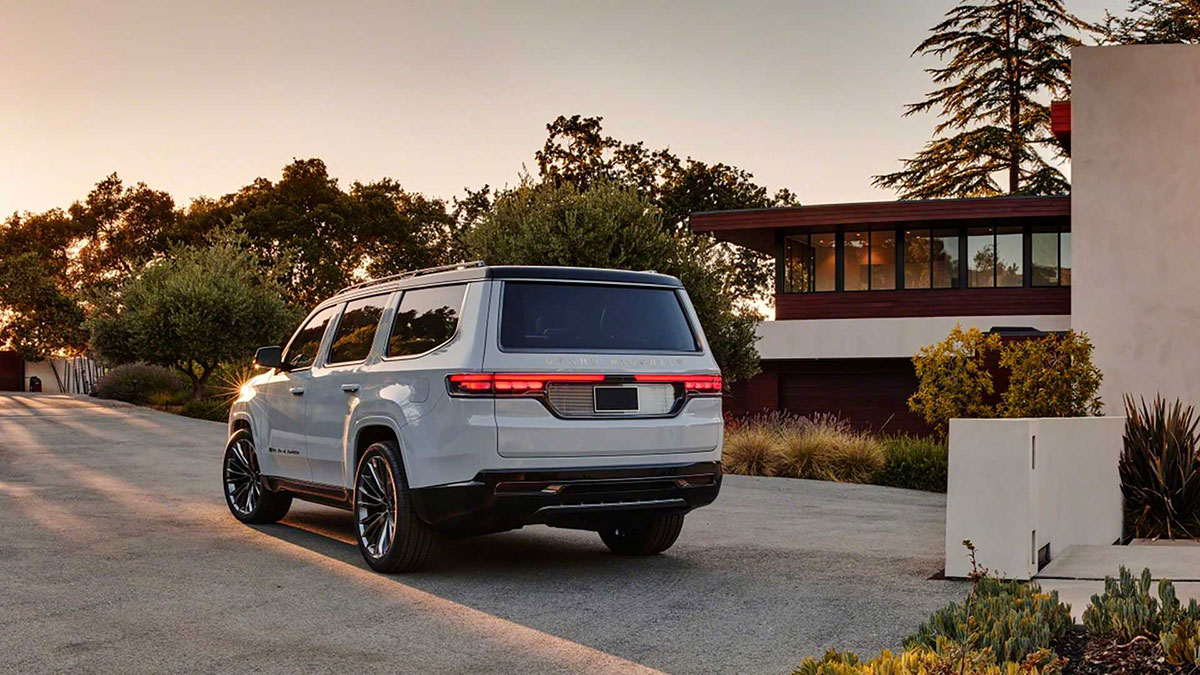 Inside, A lavishly styled interior houses all of that extensive technology, the seats, dashboard, and door panels are crafted not from leather, but from PUR, a sustainably crafted synthetic material. Recyclable Dinamica suede appears on the headliner, while the premium carpets are made of recycled-content Thrive fiber. 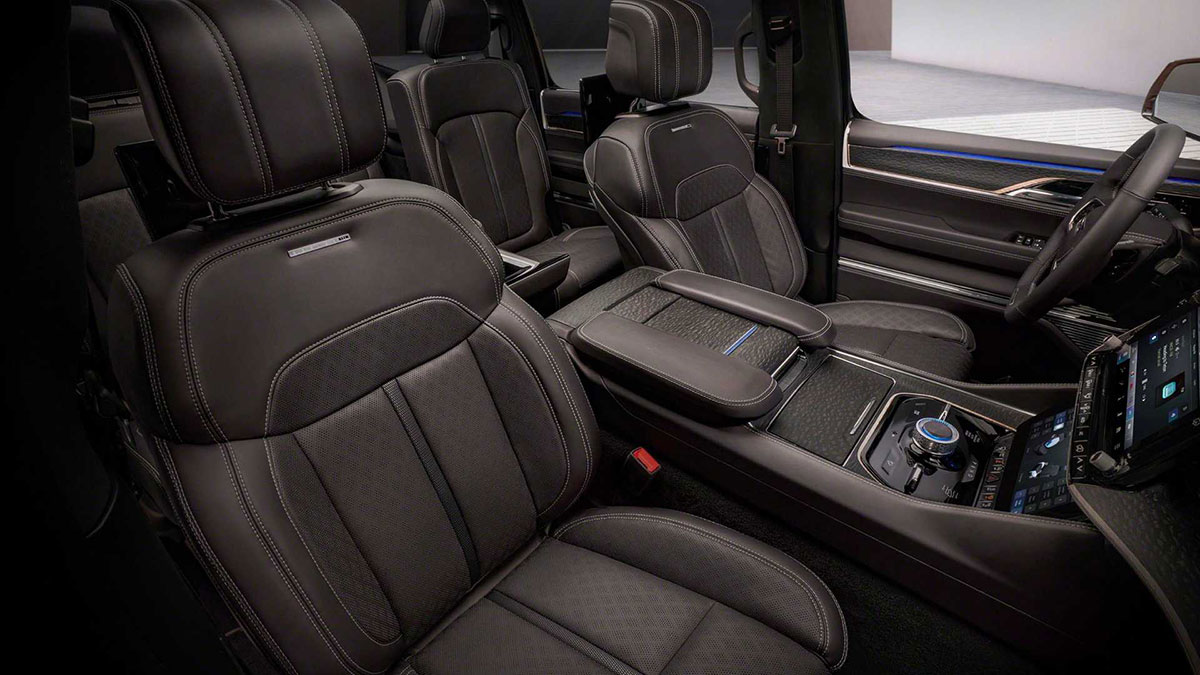 The dash is upright and wide, with the top wrapped in leather and the bottom finished with aluminum and, what’s probably a special concept feature, heat-treated lacewood. In between are large panels of glass. 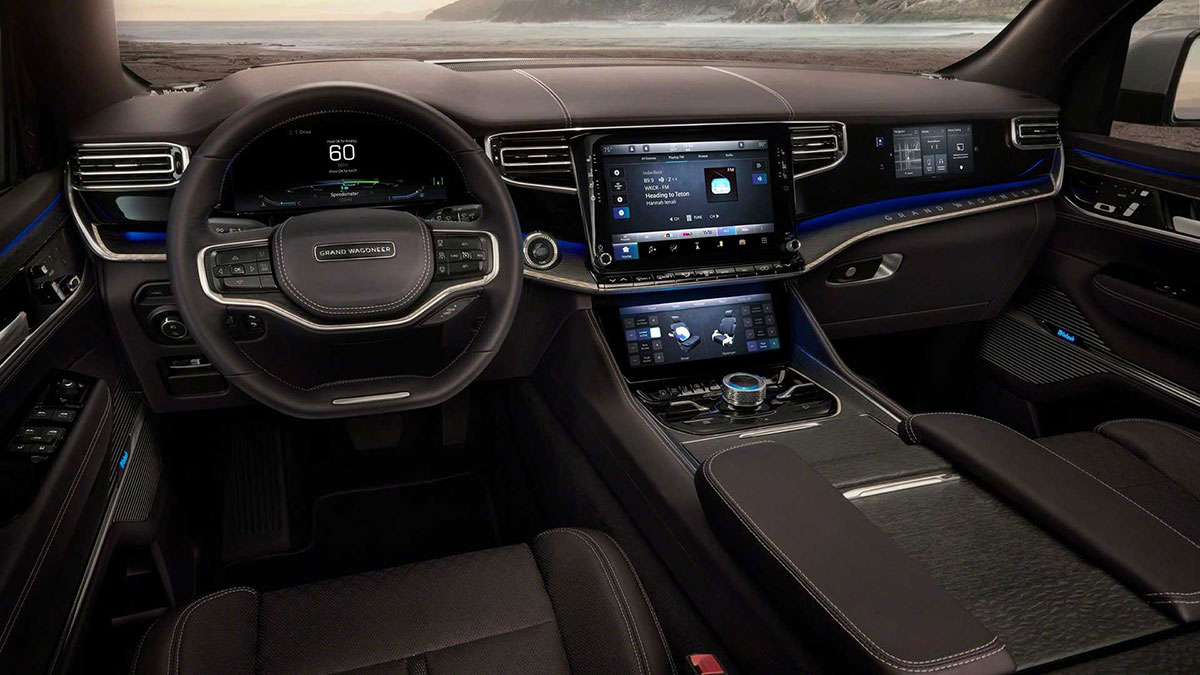 You get 7 screens that run Uconnect 5. The driver sits behind a 12.3-inch reconfigurable display, while the passenger gets their own 10.3-inch touchscreen infotainment system right on the dashboard. 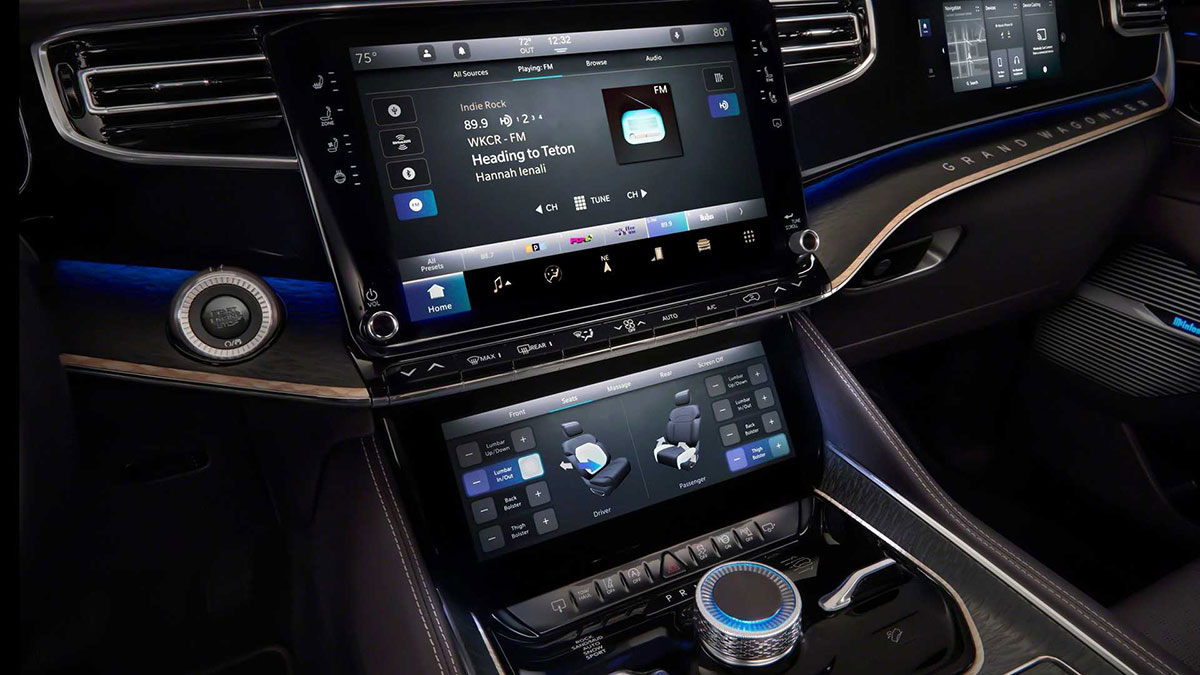 A split-screen layout similar to Land Rover’s TouchPro Duo appears in the center stack, with a 12.1-inch upper display serving as the primary infotainment system. A 10.3-inch lower touchscreen mounted near the center console is called a “comfort display,” operating features like seat massage and lumbar adjustments. A few hard climate controls join a tuning and a volume knob, providing a few logical, analog inputs to go along with the digital-heavy front cabin. 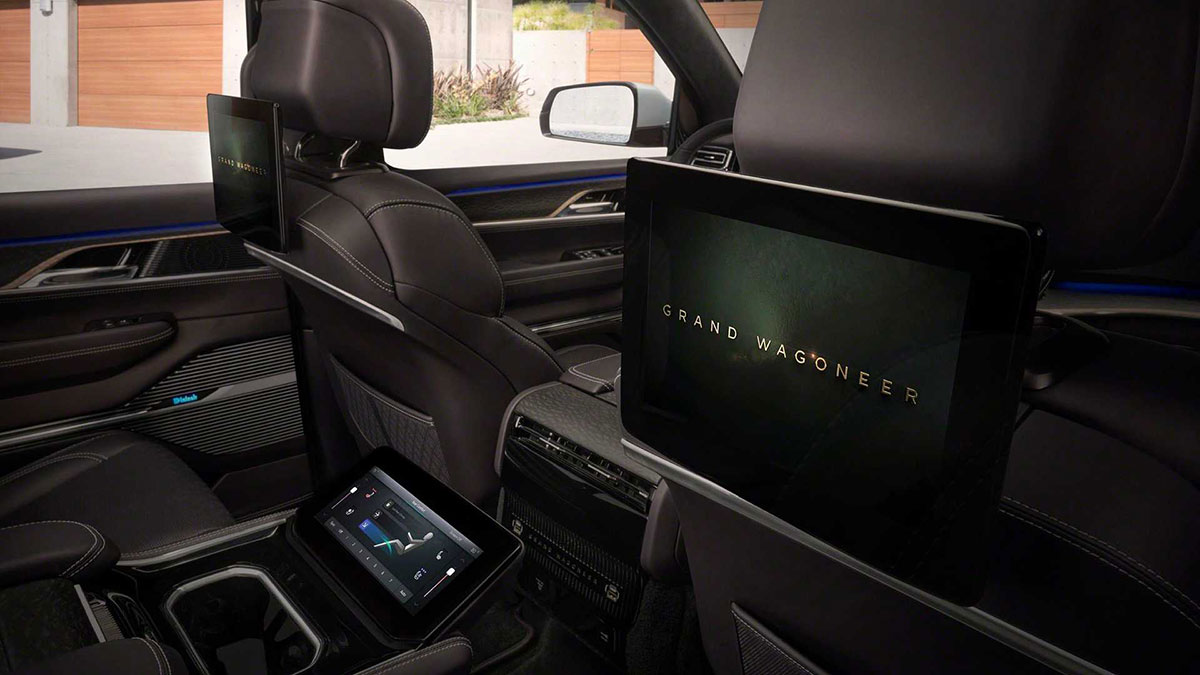 In the back, rear-seat passengers get their own 10.3-inch center console display. In addition, a 10.1-inch touchscreen display appears on each front seatback for the rear-seat entertainment system.  The third-row will have to be happy without screens. Sound for all these screens comes through a McIntosh 23-speaker sound system that features aluminum trim and blue lighting like the company’s home audio systems. The infotainment will even display simulated VU needles like a Hi-Fi setup. 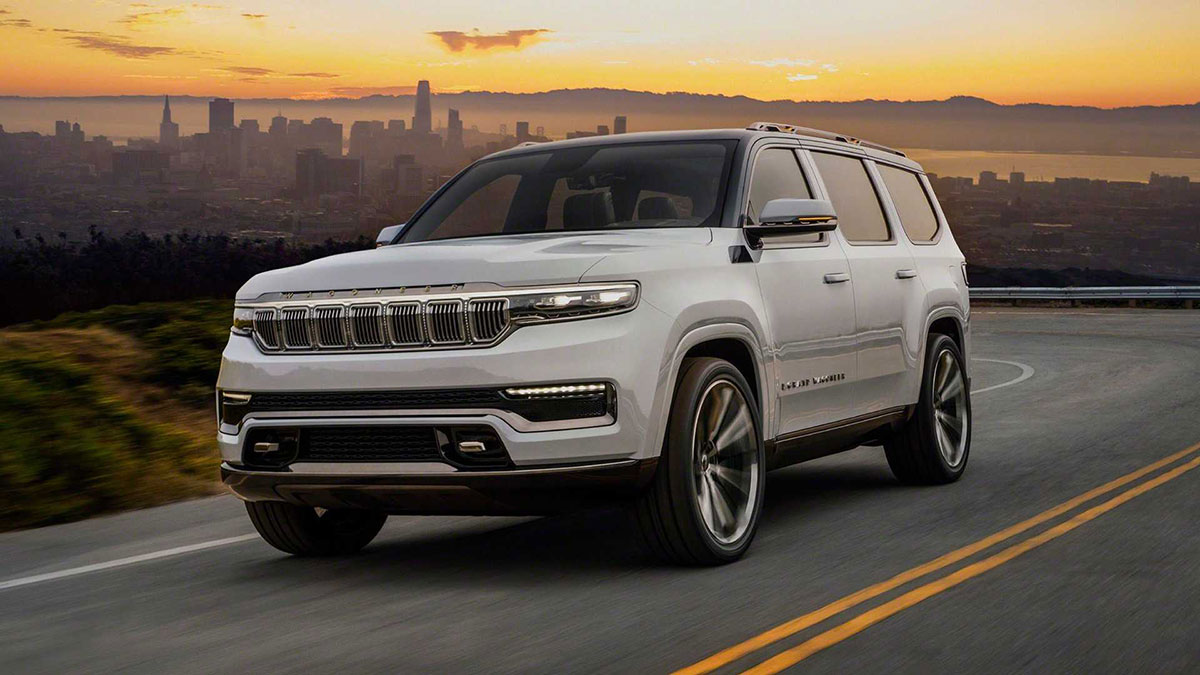 Jeep has not shared any information on powertrains but has promised an electric variant. Apparently the production model will be available with three different four-wheel-drive drivetrains. The suspension is fully independent at each end, and the air suspension will be offered. Jeep will also sell versions of the SUV with both the Wagoneer name and the Grand Wagoneer name. As the production Wagoneer will start around $60,000, and Grand Wagoneers could break the six-figure mark.