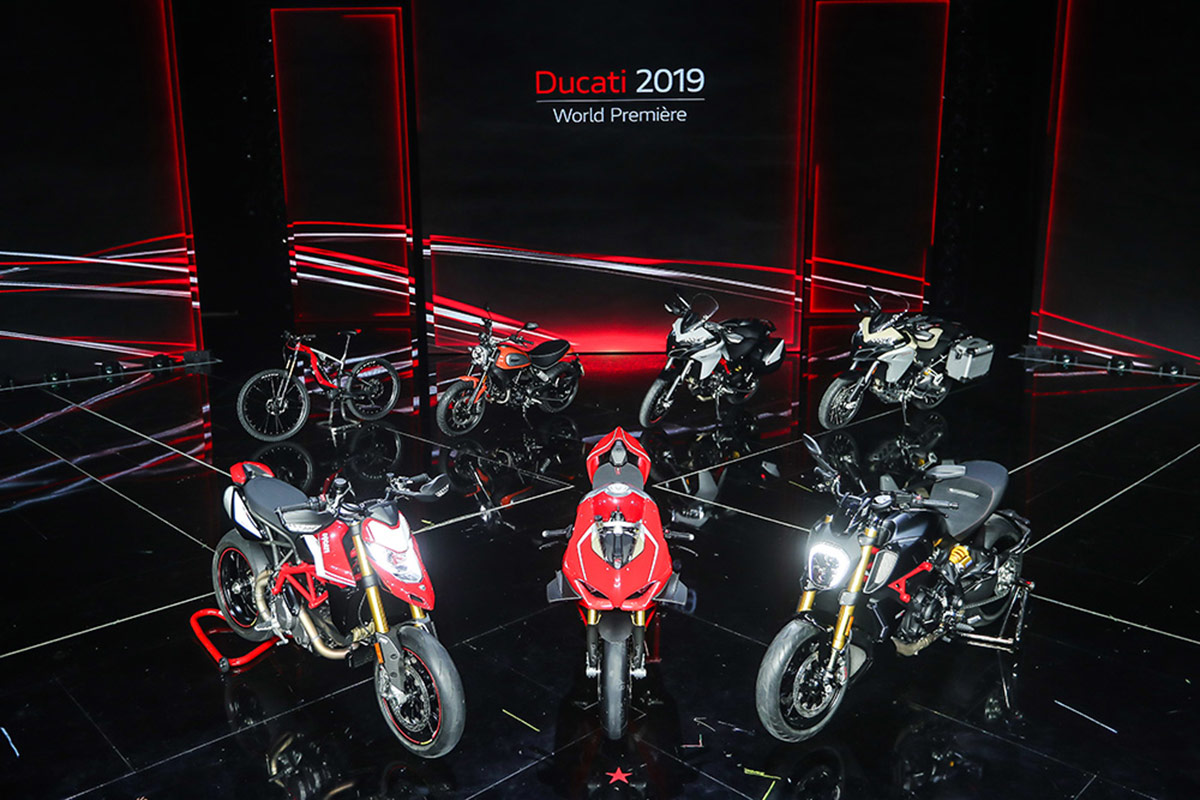 The three all-new motorcycles unveiled by Ducati in the run-up to EICMA 2018 were: Panigale V4 R, Diavel 1260 and Hypermotard 950. The Premiere also saw presentations of the new versions that will join the 2019 range. These include the Monster 25th Anniversary, first seen at WDW2018, and the new Monster 821 stealth that features matt black livery and red graphics, quick shift system, adjustable fork, and nose fairing. 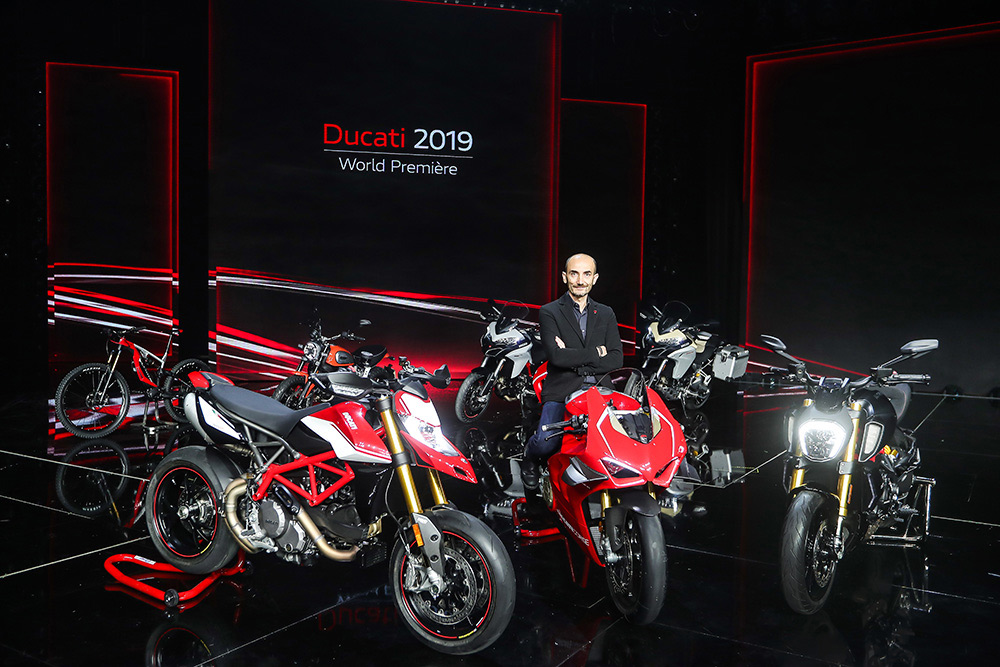 The first of the all-new motorcycles in the Ducati 2019 range is the Hypermotard 950, which has been given a full-blown makeover: the new look takes its cue from the supermotard race world, the completely overhauled ergonomics ramps up the fun and riders can now count on an ultra-advanced chassis set-up and electronics package. 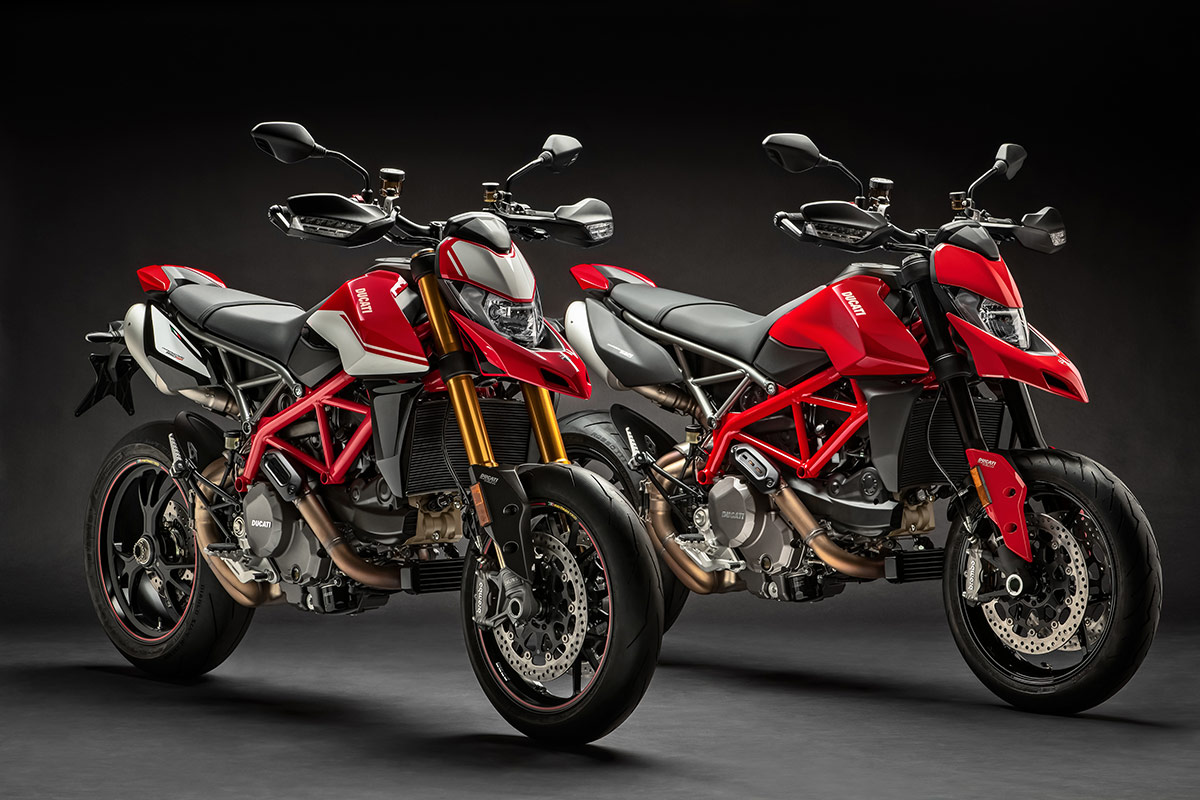 The Hypermotard 950 electronics package includes Bosch Cornering ABS with the Slide by Brake function, Ducati Traction Control EVO (DTC EVO), Ducati Wheelie Control (DWC) EVO and Ducati Quick Shift (DQS) Up and Down EVO (as standard on the 950 SP version and available as an accessory on the 950).

Now even higher-performing and with racing overtones, the Hypermotard 950 SP features a flat seat, increased-travel Öhlins suspension to ensure an acuter lean angle (+3°), Marchesini forged wheels and Ducati Quick Shift (DQS) Up and Down EVO.

Another major release was the new Diavel 1260. The second-generation Diavel 1260 now offers more assertive outlines and higher performance, is more fun on mixed-road routes and offers greater comfort for rider and passenger alike. Its sport naked soul is evident in the Testastretta DVT 1262 engine, capable of delivering 159 hp at 9500 rpm and 129 Nm at 7,500 rpm.

The excellent riding position and ‘power cruiser’ ergonomics that helped make this motorcycle so successful remain unaltered: what has changed is the chassis set-up, characterized by a new tubular steel Trellis frame that goes perfectly with another Diavel hallmark, the 17″ inch rear wheel with its 240 mm wide tyre.

A sportier S version of the Diavel 1260 is also available: features include fully adjustable Öhlins suspension at both front and rear, dedicated wheels and an even higher-performance braking system. Moreover, the S version mounts Ducati Quick Shift up & down Evo (DQS) as standard to allow clutchless shifting.

The undisputed star of the Ducati World Première 2019 – and aspiring candidate for the title of ‘best-looking bike of EICMA 2018’ – was the Panigale V4 R. Compared to previous R versions, the Panigale V4 R is now even more specialized and bristles with technology taken directly from MotoGP. 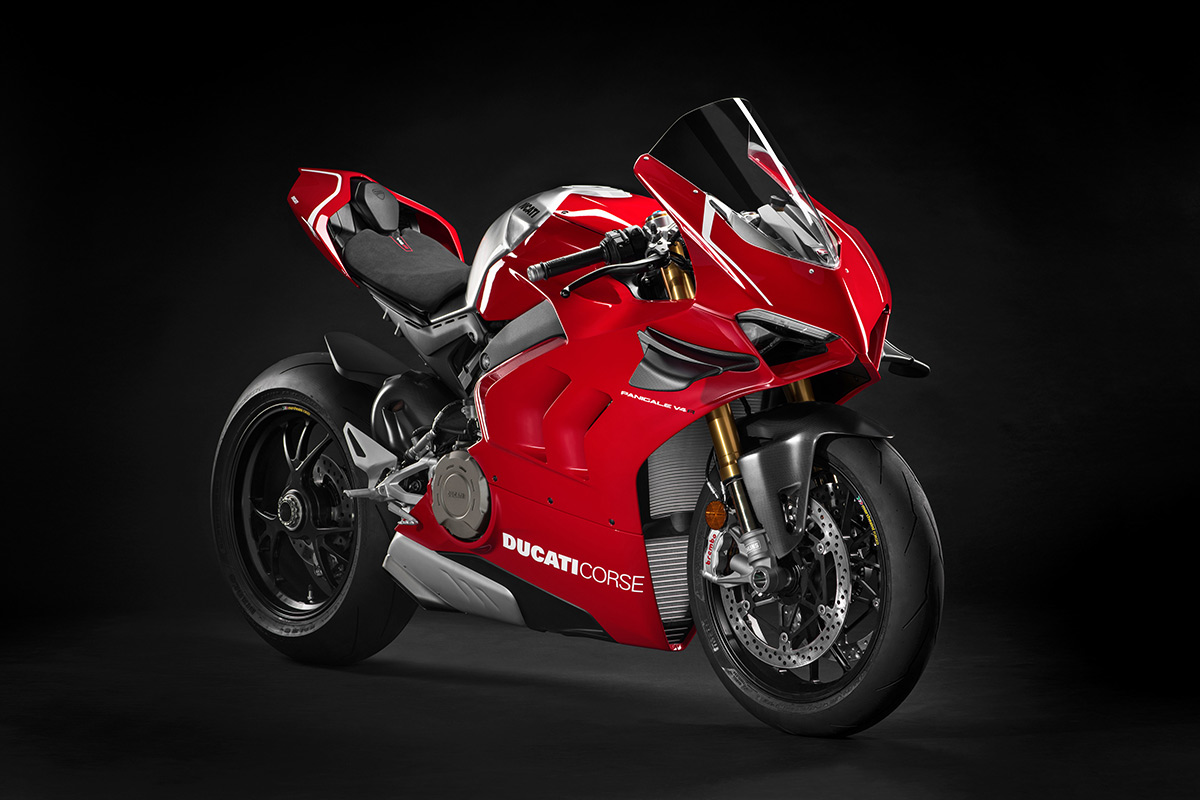 The modifications extend far beyond the engine and suspension set-up: they also include the fairing, designed and developed by Ducati Corse in close collaboration with the Ducati Style Centre to improve aerodynamic efficiency. The new fairing also incorporates the aerofoil appendages developed for the MotoGP prototypes. Made of carbon fiber, they increase stability throughout the ride, to allow for reduced reliance on electronic controls, boosting confidence for the pinnacle of rider performance.

The Panigale V4 R is, to all intents and purposes, a road-legal WSBK category competition bike and constitutes the technical foundation for the official Ducati Superbikes that will compete in the World Championship as from the 2019 season. 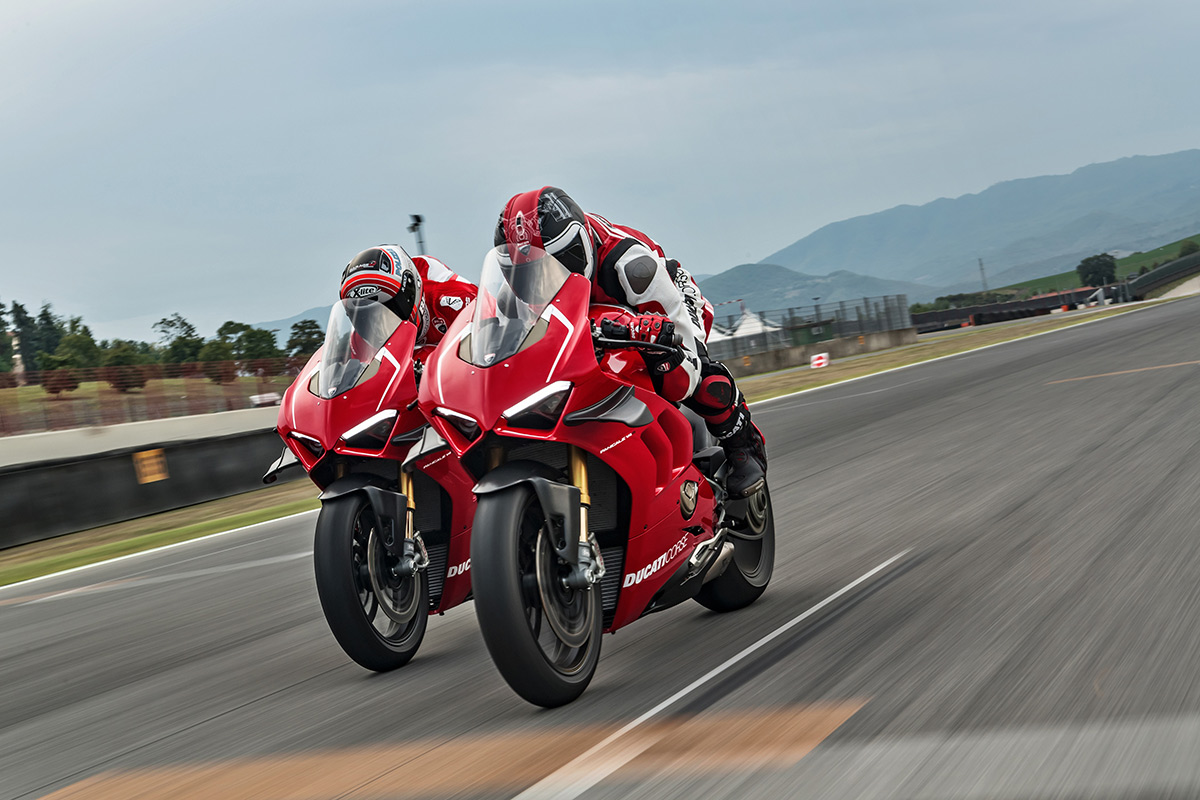 Moreover, it’s characterized by lighter internal components (which reduce overall bike weight by 2 kg compared to the Panigale V4S, bringing kerb weight down to just 193 kg). Greater air intake efficiency allows faster engine ‘rev-up’ and shifts the rpm red zone higher to ensure improved acceleration. The result is 221 hp of power at 15250 rpm.  These impressive figures can be taken even higher by fitting the full-racing Ducati Performance exhaust by Akrapovič, which boosts maximum power to 234 hp at 15500 rpm. In short: the most powerful Ducati factory motorcycle ever! 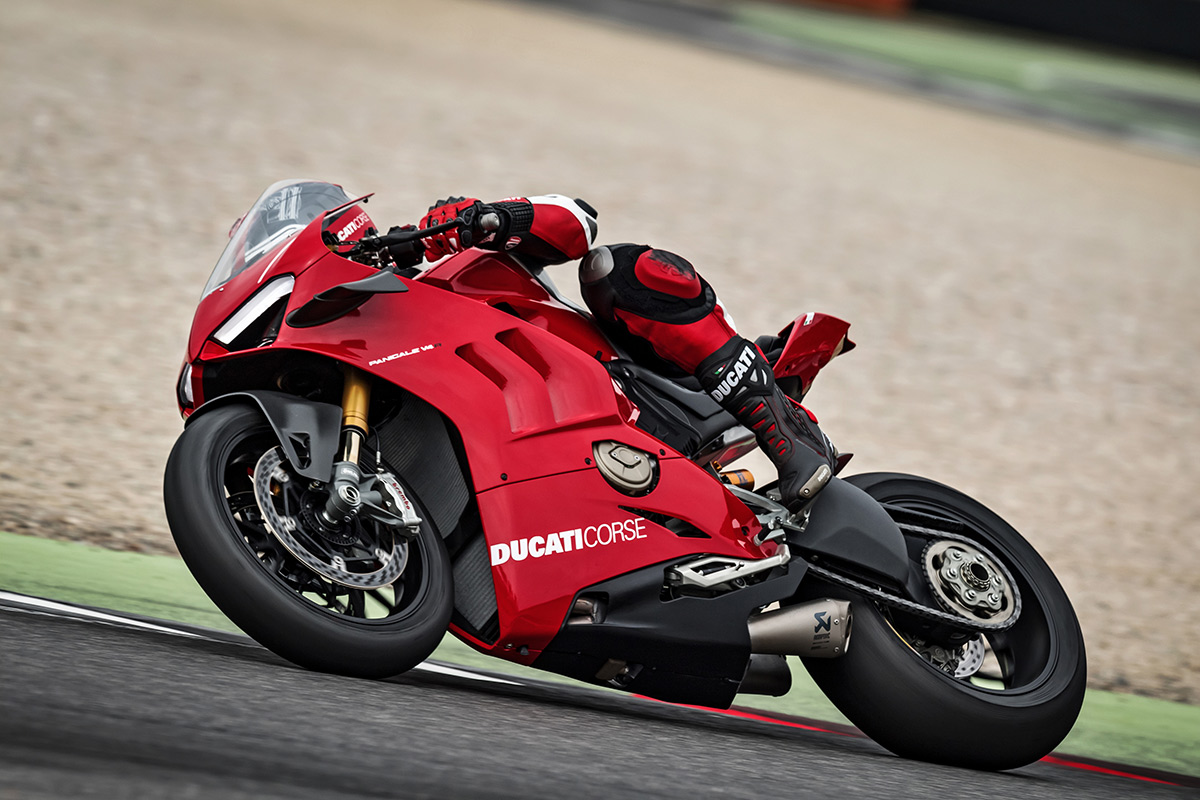