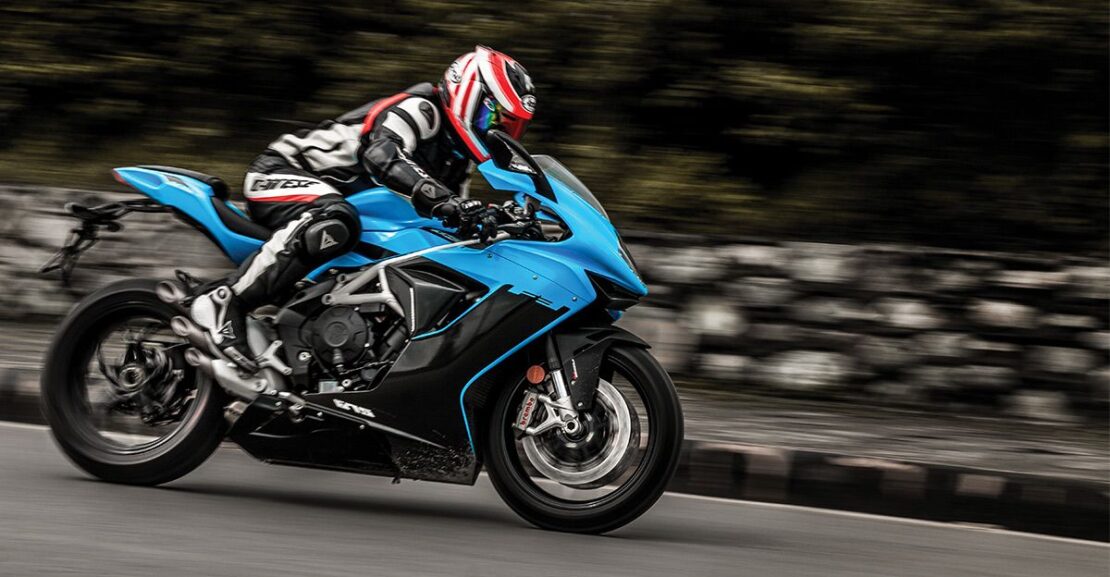 It isn’t every day that you get to straddle a 675cc, triple-cylinder, Italian crotch rocket and take it out for the entire day; but when the day finally comes, you make the most of it. So, this is just what we did when Velocity Pvt Ltd, authorized dealers of MV Agusta in Nepal, asked us if we wanted to take the F3 off their hands for the day. We believe our exact words were around the lines of “yes, yes, we’ll do whatever you want! Just give us the keys!”. But let’s not get into the details. What’s important is that we had the MV Agusta F3, one of the most beautiful motorcycles ever created, at our disposal and we had 12 hours to do with it what we wished. 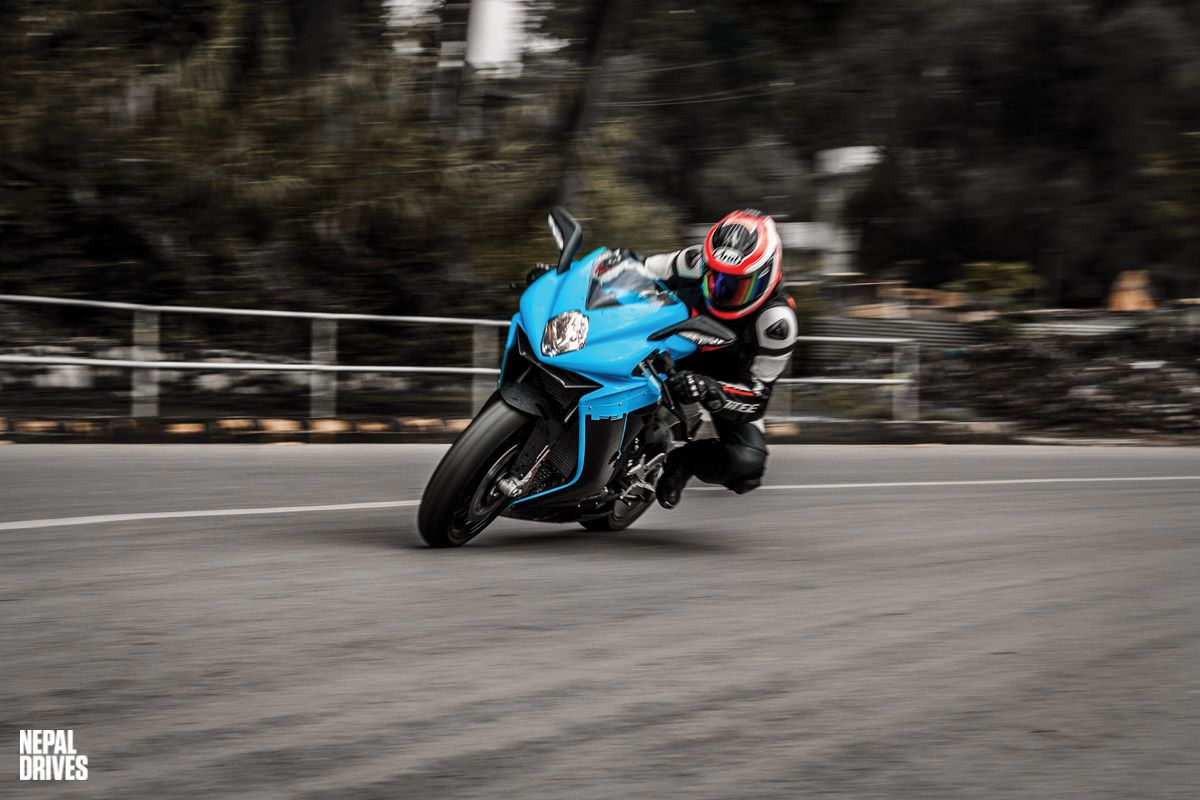 WE USED UP THE FIRST HOUR ADMIRING THE SHEER BEAUTY OF THE MACHINE.

It’s difficult… Nay! Impossible, to be unimpressed by the MV Agusta F3 675. It’s your bedroom wall poster put in front of you, and it’s even better than how you’d imagine it would be. Shedding the iconic Agostini Red and Silver of the MV Agusta brand, the F3 675 we had on hand came in the Intense Sky Blue and Night Grey color. The paint is perfect and the fit and finish is impeccable. The F3 borrows styling elements from its elder sibling, the flagship F4 superbike and brainchild of ace designer Massimo Tamburini. 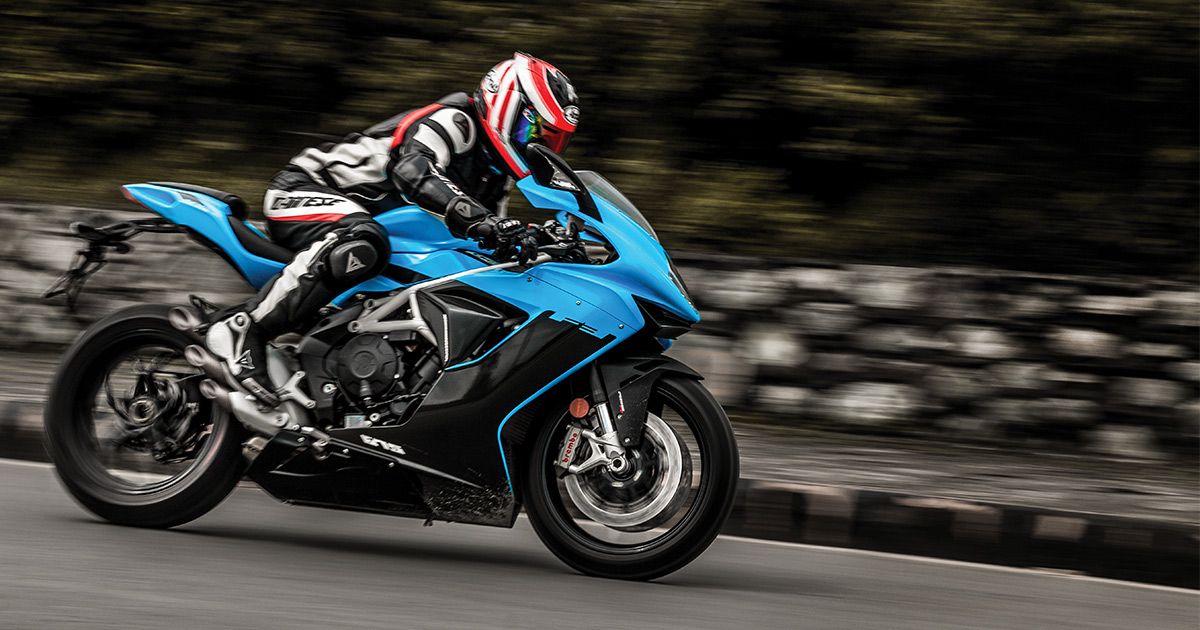 And like its elder sibling, the F3 gets a violent demeanor incredibly designed to a level of sophistication that is second to none. Whether it’s the aggressive headlight unit, single-sided swing-arm, the unmistakably-MV three exit exhaust, the silver mechanical frame peeking out of the frame in contrast to a blue color scheme, or the immaculately designed tail end, the F3 is sculpted to enthralled its audience even when it’s at a standstill.

There aren’t words that can really describe what the F3 exudes, especially in a country like Nepal where it’s difficult to come by such an amazing specimen. MV Agusta has mastered the art of making the most amazing wallpaper machines come to life, and the F3 is amongst their best work. 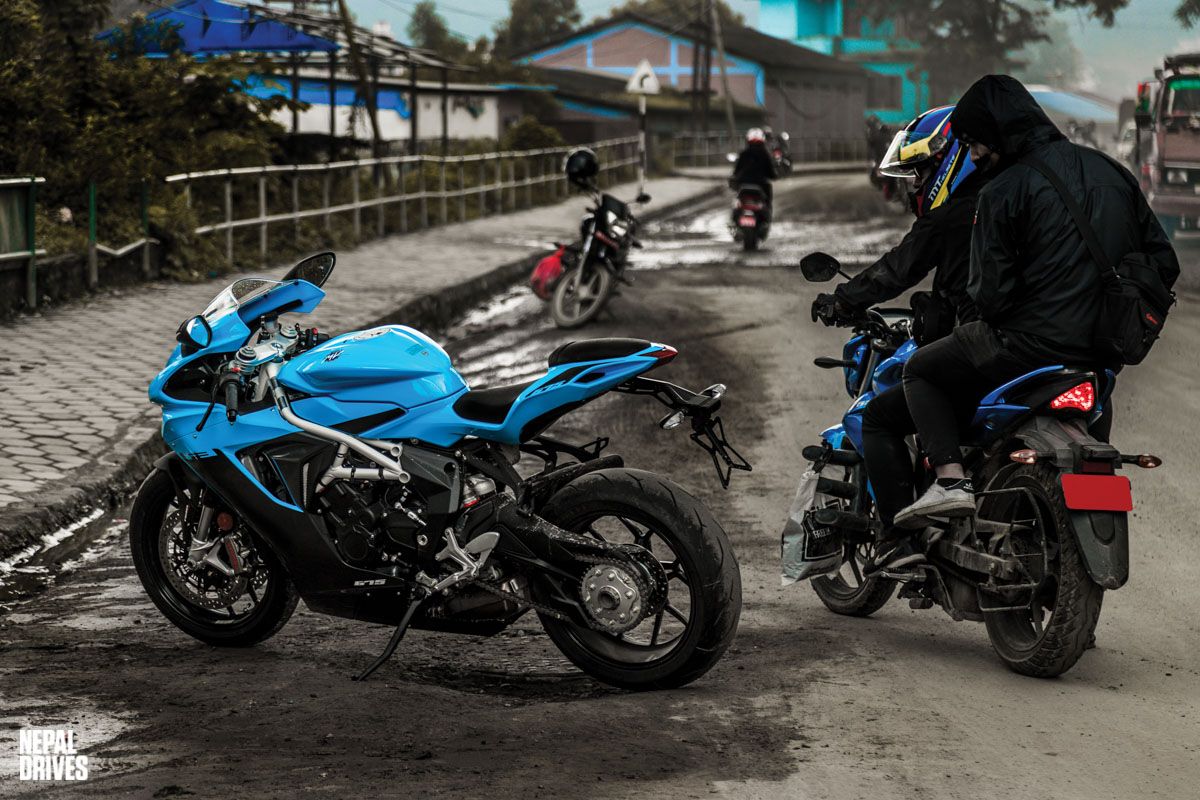 EVEN BEFORE PUTTING THE KEY INTO THE IGNITION, THE F3 HAD US SPELLBOUND. UNSURPRISINGLY, IT HAD THE PERFORMANCE TO MATCH.

Astride the F3, you’re aggressively perched on the low seat and rear set footpegs; perfect to pin the throttle and make the extremely high revving, three-cylinder engine orchestrate the bellows of 128bhp at 14,500 RPM. 71NM comes in at 10,600RPM. The rev-limiter intervenes at 15000 rpm so you’re going to want to take riding it to the max. The F3 675 pioneered the counter-rotating crankshaft as the first supersport production motorcycle to feature it. The counter-rotating crankshaft cancels out some of the forces generated by the wheels and makes the bike easier to turn. 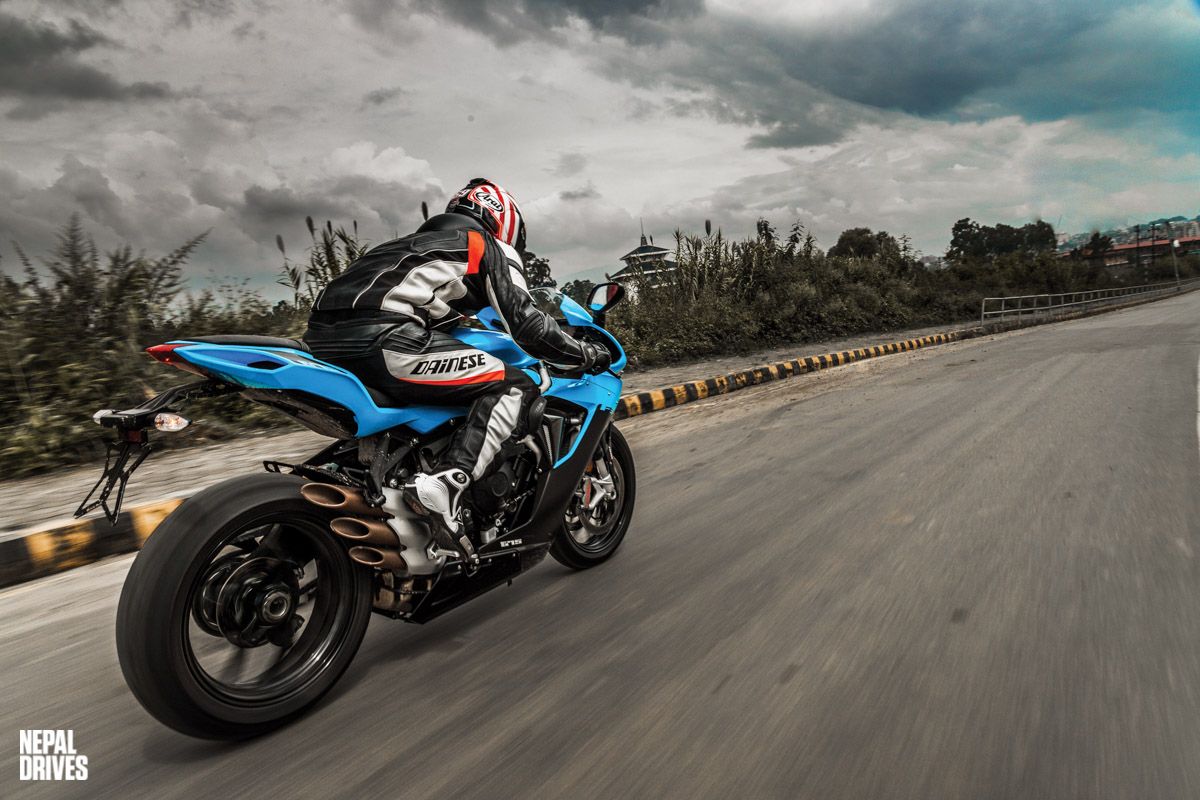 This combination of a high revving engine and efficient corner-carving makes it an amazing motorcycle to ride. You can customize the type of riding you want from the MV Agusta F3 675 via the full MVICS system. It includes four pre-set engine maps, with one user-customizable map, which works along with the eight different levels of traction control. With the F3 you also get loads of features from riding modes, to electronic engine braking control, electronic quick shifter, anti-wheelie system, variable power maps, and traction control. 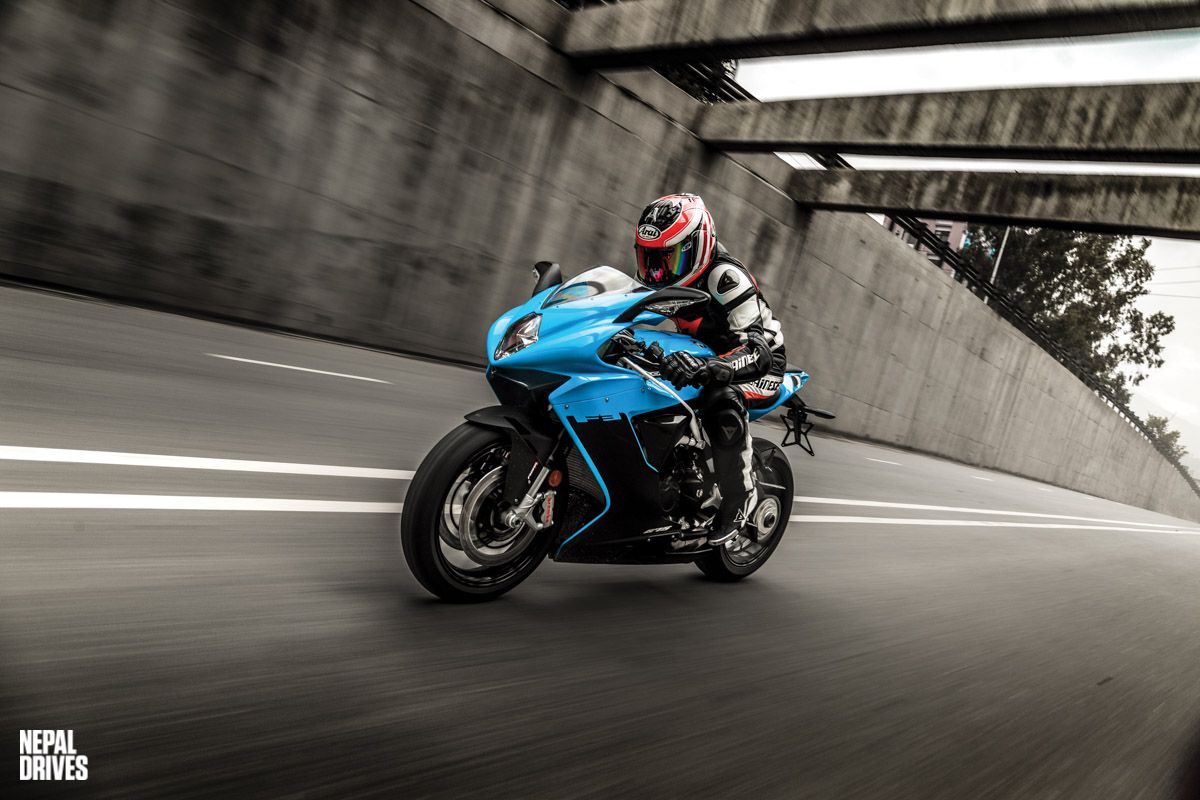 Despite the plethora of rider aids, the F3 isn’t exactly comfortable lugging itself in city traffic. Riding the F3 in standstill traffic is like straddling a raging bull waiting for the gates to open. Once the path clears and you get some lead way to open up the throttle, the F3 comes into its element. Get it past the mid rev ranges and things really begin picking up. It exhibits a sense of urgency akin to the cheetah in full sprint, the front wheel hopping with every wring of the throttle only to be restrained by the electronics onboard. The bars are really close and you feel more connected to the motorcycle when you’re riding it, making for quick and confident work of sweeping corners. It isn’t a big fan of bumpy sections and you’re most likely going to come across a few if you’re riding in the roads of Nepal. 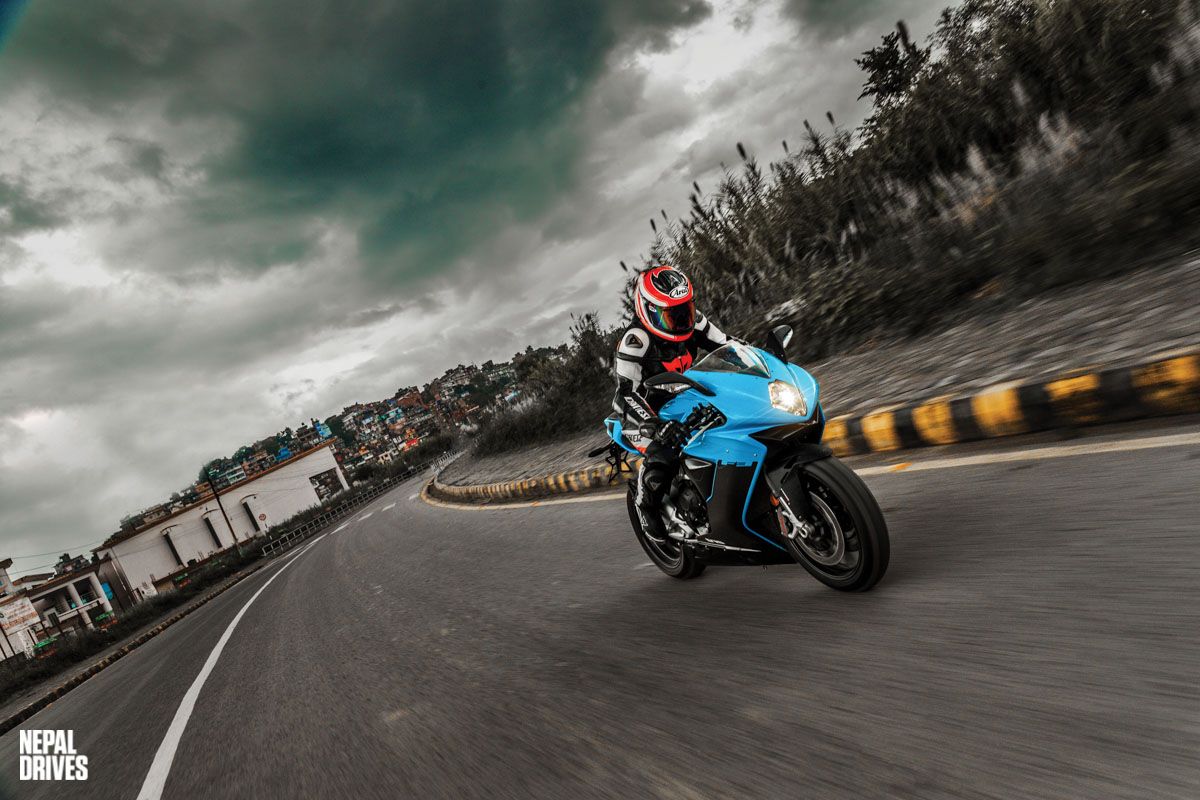 If you’re really looking for some fun, switch to sports mode. High-speed runs are exhilarating, although you will have to get used to the occasional sensation that the bike has dropped out of gear when you’ve let out on the throttle. This is the engine braking system cutting in, opening the throttle slightly to prevent rear-wheel lock-up. This gives the feeling that you’re accelerating into a turn rather than braking. The sports mode is the only mode in which the braking control operates. 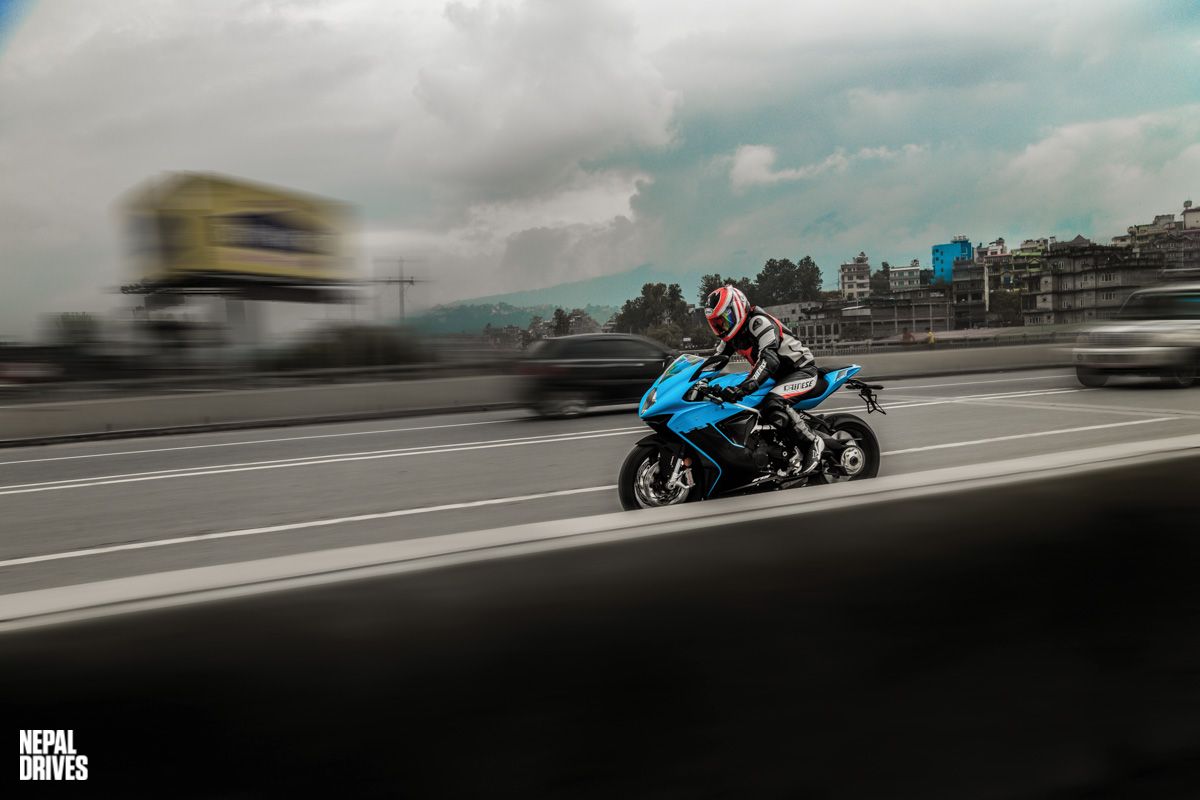 WHAT YOU’RE IN FOR, IS A RACE BIKE EXPERIENCE IN THE TRUEST FORM. 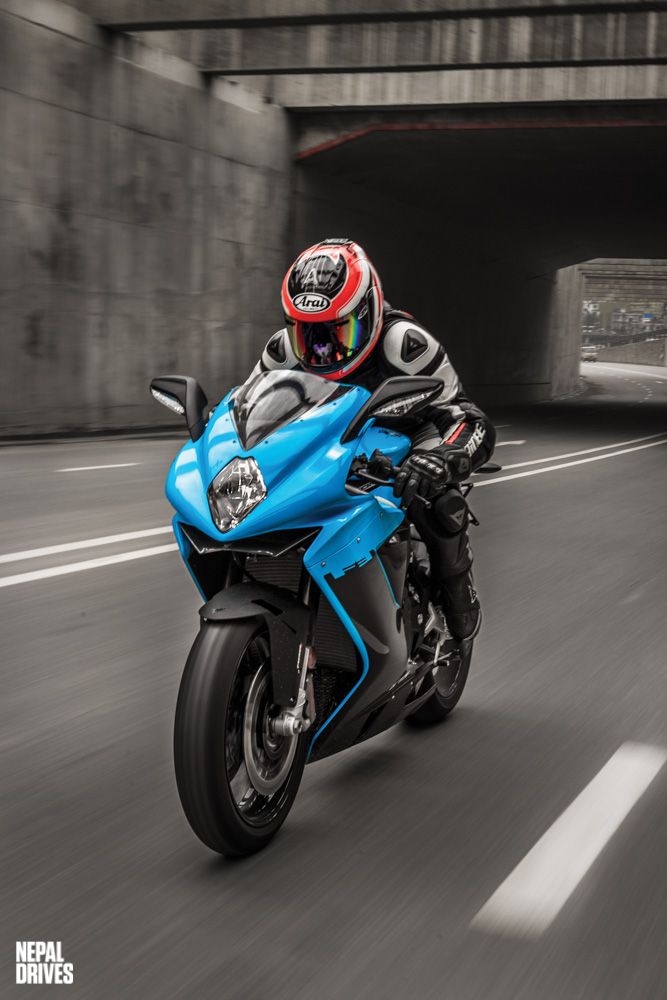 If it wasn’t for this small niggle, not in the part of the F3, this machine is the cream of the crop. It is a bike that gives as close to a race bike experience to the road rider as you are likely to get anywhere else. It is the epitome of Italian passion and art poured into a beautifully sculpted machine that is a properly thoroughbred thriller.